There’s a fair bit of expectation around Vampyr, the next title by Life Is Strange creators DONTNOD. Following on from that narrative-driven adventure, given the way it blew up and turned into a bit of a cult hit, was always going to be a thankless task and for those expecting Vampyr to essentially be Life Is Strange, only Vampires’, you’re going to be left wanting.

Vampyr has more in common with Bioware’s suite of RPGs than anything else. You play as Dr. Jonathan Reid, fresh back from the frontlines of World War I, who finds himself waking up from the dead as a blood-sucking vampire, and understandably, wants some answers. It’s a great setup – a man who has sworn an oath to help those suddenly dealing with an insatiable thirst for their blood – and how you balance those two aspects is a core part of the Vampyr experience.

Off the back, Vampyr states that it is a difficult game. Enemy levels always seem a touch higher than your own, meaning you’ve got to be cautious with each encounter and utilise your newfound abilities to deal with them. Experience points allow you to level these up, gain more health and follow the usual RPG progression, but it’s a slow process.

You can, however, drain any of the characters you encounter – quest givers, shopkeepers, even mission-critical ones – and their blood gives you a significant experience boost. The richer the blood, based on their social standing, importance in the district and other factors which you can effect with medicine and information found on them through conversations, the more experience you get. Drain a few of them and you’ll be able to power level Reid and find the game a lot easier but at the cost of potentially plunging a district into fear and chaos. 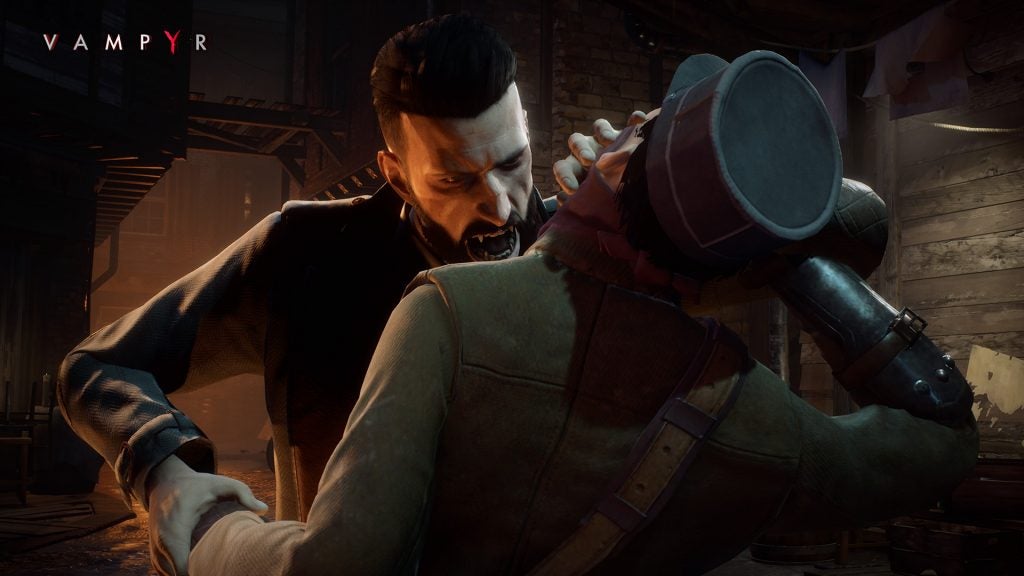 Illness and disease are rife throughout the districts you visit – The Docks, Pembroke Hospital, Whitechapel and the West End – in Vampyr and Reid, as a doctor, can craft medicines that can be given to people to curb this getting out of hand. Left unchecked, diseases can spiral out of control and the status of the district can plummet from stable to complete bedlam.

Every character, outside of the generic mobs that make up enemies, has a purpose within the world. They have a name, relationships, family and, of course, secrets. Conversations can unlock the ability to ask more personal questions, and knowledge can help with decision making within quests that affect them.

This also means that any time you take a life, your actions will have a shockwave effect throughout the city. Just because someone is a murderous scumbag, it doesn’t mean that their death won’t matter. Sucking someone’s blood might make you a powerful vamp, and combat a lot easier, but it might make your life harder in other ways.

The London of 1918 looks beautifully grim. Of course, you mostly see it at night, due to Reid’s affliction, but the street lights cutting through the fog, framing the turn of the century architecture is fantastic. Character models are equally detailed, but there’s some occasional texture pop-in so sometimes conversations start with someone looking a bit rough. The atmosphere really adds to the story, as Reid searches the city to discover what it is that happened to him and delves into the vampire underworld. There’s a hierarchy of these bloodsuckers and different types that you’ll encounter throughout. 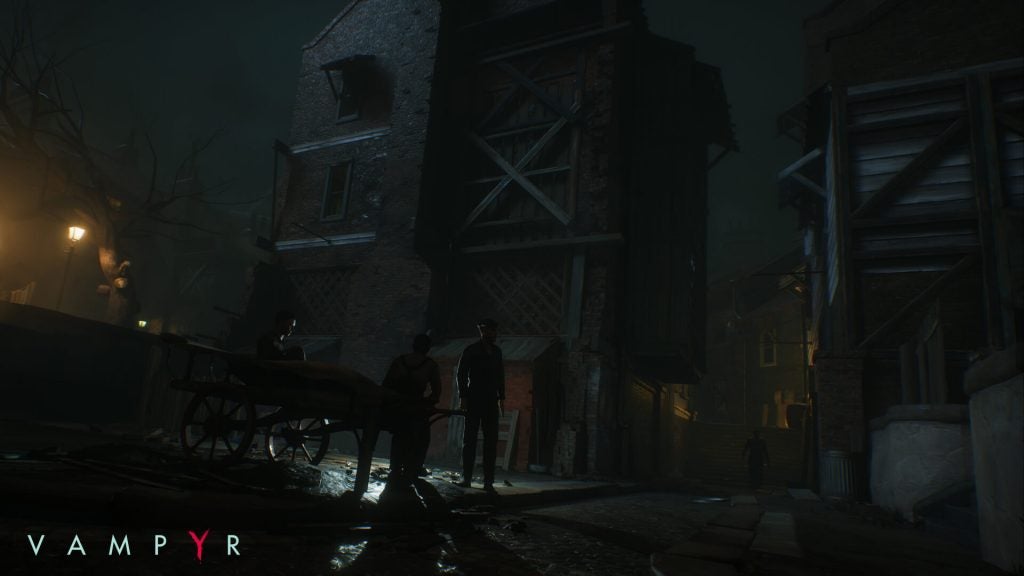 The combat, which makes up a whole load of the game, isn’t anything to write home about. It’s a fairly standard Dark Souls-inspired system, where you lock on to a target and wait for your opportunity to attack. Stamina dictates whether you or your enemy can attack or defend, whilst your blood meter is used for the various vampiric spells and abilities. There’s a bit of variation in the skill tree, but nothing as radical as, say, being able to make an entirely stealth build, or improve your speechcraft, like in other RPGs. The skill tree here is basically a bunch of different attacks and buffs that you use in combat and only start really feeling like a truly unique class at the higher levels.

Although the core storyline missions are decent and keep the game ticking over at a decent pace, the sidequests leave a lot to be desired. There’s nothing like The Witcher 3’s ‘Bloody Baron’ here. A lot of the sidequests have you going to a ‘dungeon’ area, like an abandoned warehouse or a sewer, killing a bunch of enemies, tackling a boss and coming back with an item. There’s not a massive amount of variety to them and they start to drag quite quickly.

Much like DONTNOD’s pre-Life Is Strange title, Remember Me, Vampyr is one really good idea attached to a totally serviceable videogame. The combat is uninspiring, but ultimately fine. The plot is engaging, with some decent voice acting and an excellent score bringing 1918 London to life and the quests blow hot and cold, with some pushing the story forward with some thrilling moments and a lot being Vampyr’s version of the oft-ridiculed ‘Rat Hunt’. Managing disease in the districts, Reid’s internal moral struggle and the way both of these can have a genuine effect on the world allows for some really different playthroughs, and is just a good enough idea – and crucially, executed well enough – to hold Vampyr up. 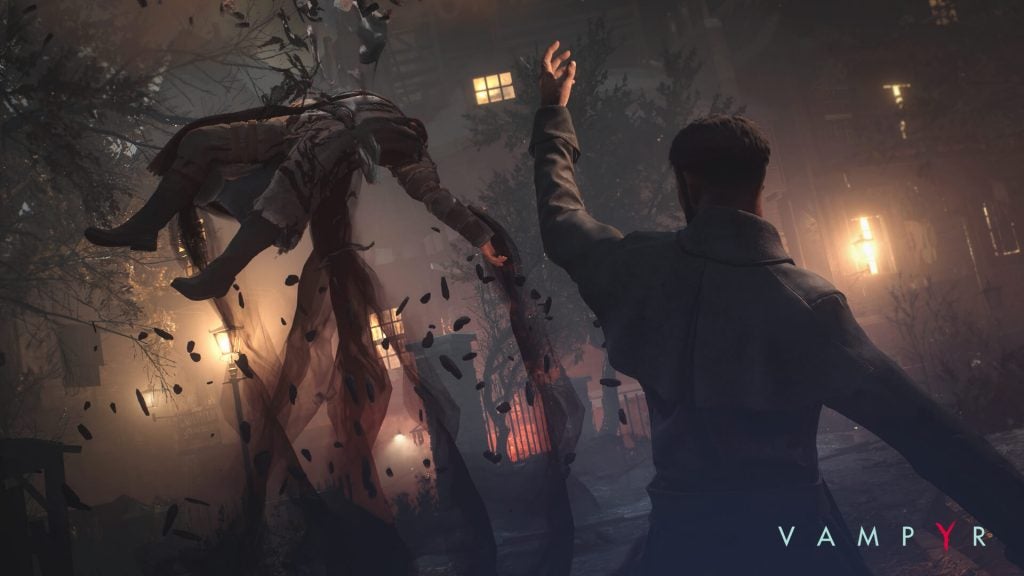 Vampyr might not be what many wanted after Life Is Strange, but it’s still an enjoyable – well, as enjoyable as its grim nature allows – game nonetheless. It follows the modern action RPG template almost to a fault, but the agency the player has in shaping the districts by disease control and straight up murder is a lot more interesting than some of the moments in other games within the genre, where they present you a binary choice that pushes the plot forward. It’s a decent idea holding up an otherwise solid game, but overall Vampyr is worth a look if you’re looking for something to plug the gap in your life in this post- Witcher 3 world.