At the mention of a little knitted character, it’s hard not to think of LittleBigPlanet and Sackboy, or even the more recent Yarn Yoshi of Yoshi’s Woolly World. But Unravel and its protagonist Yarny are certainly spinning a different kind of yarn, bringing a stunning platformer and all the feels to boot.

When you look at this charming platformer, you might be shocked that it’s published by EA Games. This publishing giant, so often tarred with marred game launches, has put its name to a game that isn’t related to guns, sports, Plants vs Zombies or The Sims. And that’s quite the innovation in my book. 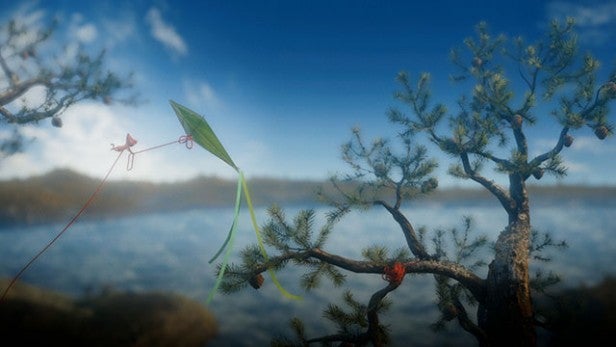 Unravel has been developed by a small Swedish studio called Coldwood, where 14 people spent two and a half years pouring their souls into this charming platformer and Yarny himself.

In fact, Creative Director Martin Sahlin created the original concept on a camping trip with his family, where he wove the first hand-made Yarny and took pictures of him exploring the stunning Swedish countryside.

And that’s the premise of Unravel – appreciating the small things in life. Whether it’s the colour of the turning leaves, a hedgehog snuffling for food, the lights twinkling in the night sky or the sparkle of fresh snowfall. 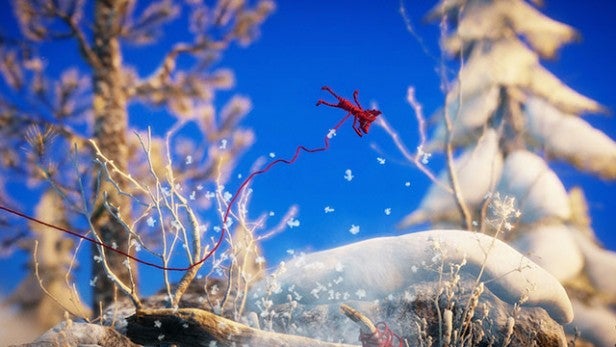 At the heart of the game, though, is an elderly woman. Yarny himself is born straight from her knitting supplies, and it turns out it’s up to Yarny to rebuild the woman’s photograph album, exploring the memories of her husband, children and grandchildren through her life.

Each level of Yarny’s journey is accessed through the photographs scattered around the woman’s home, with each one taking place in a different location.

The game begins in the lady’s back garden, with Yarny exploring the flowerbeds and leafy treetops. He’s a naive, innocent yet capable protagonist, who explores and overcomes his fears – initially he’s startled by a butterfly, later he’s understandably fearful of glowing green puddles full of toxic waste.

It’s actually quite surprising how much emotion Yarny emits throughout the game, despite him being almost completely featureless. He shivers, gets startled, feels joyful and exhibits a number of other palpable emotions. Who knew a ball of wool could be so expressive? 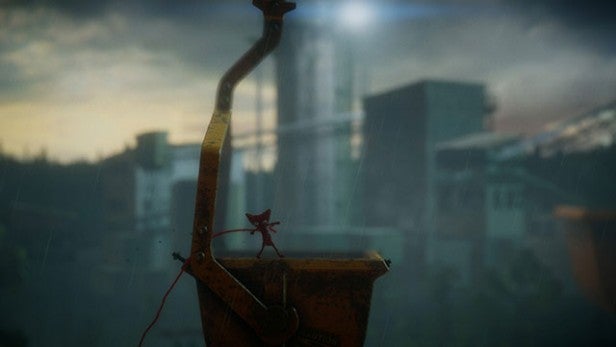 In terms of mechanics you’re looking at a fairly simple arsenal of moves. Yarny travels through each level leaving a trail of bright red wool behind him, which is meant to signify the bonds between people. It’s this wool that becomes key to the puzzles that are scattered throughout each of Unravel’s 12 levels.

You use R2 to fling a lasso of wool to create grapple points. These allow you to swing from point to point or grab hold of far-off items with a handy red woollen bow on them. L2, on the other hand, lets you climb up the length of wool you’ve left behind, which comes in handy if you want to retrace your steps or descend safely and slowly from a high point.

I’ve turned Yarny into a little woolly pancake multiple times, as well as accidentally drowning him, turning him into crab or bird feed, or even electrocuting the poor fellow. It’s really the worst feeling.

The other mechanics you need to be aware of are the ability to press the square button on any of those woolly bows to tie a knot in your wool trail. This gives you the ability to create catapult bridges between two points, with a flick of the analogue stick or touchpad sending Yarny soaring into the air and able to reach new heights. You can also use said knot to return to a previous spot quickly and easily.

You’ll also need to remember that you can use the circle button to grab hold of objects and drag them about. This includes pulling them over yarn bridges too. Just saying. 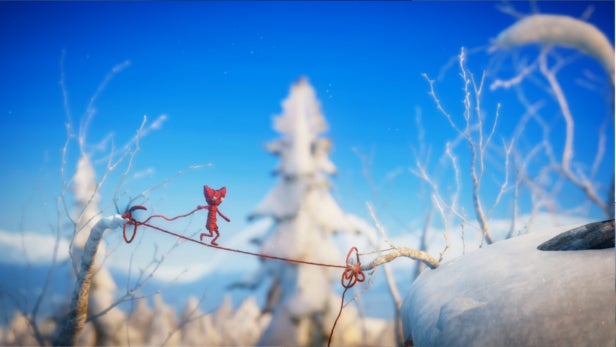 These simple mechanics become the basis of puzzles that increase in difficulty the higher the level you’re playing. But basically, they’re physics-based trials or simply about timing each swing or leap. However, you also need to make sure you’ve got enough wool to reach the next area, because as Yarny is made of the fuzzy stuff, you can often reach a point where he’s depleted until he’s too scrawny to make it any further.

At every checkpoint you replenish your wool supplies, so if you run out mid-way then you know you’re not quite solving the puzzle correctly. This becomes much more of an issue as the levels progress, but there’s always a way to tie your yarn so you can get to the next checkpoint without reducing Yarny to bare wire frame.

I was a little disappointed that there wasn’t more of a learning curve across the various Unravel levels. In an age where there are some really tricky puzzlers out there – The Witness, Limbo, The Room series, Professor Layton and more – the puzzles found within Unravel never took me longer than a few goes.

There was a particularly irritating puzzle with a log, a water pipe and a large gap that vexed me for half an hour or so. But, like with the majority of the Unravel puzzles, each solution is usually pretty obvious, it’s just about getting the timing right or making sure the knots are put in the right place or order. 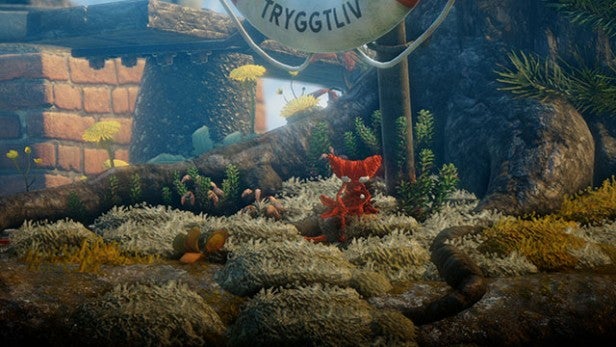 However, there’s plenty to distract you from the fact that this isn’t the most challenging game on the market. Each level is wonderfully crafted and visually exceptional on PS4. Locations vary for each level, with each presenting their own challenges and play style.

One level will see you facing ocean waves and crabs, while another will have you hiding behind items dotted about a farmland field, shielding yourself from the attacks of circling crows. Later on, you’ll be dragging a lantern up a snow-covered hill, using your knots to stop both it and you sliding right back to the bottom as you face the bitter winter gales.

The terrifying industrial factory level is particularly challenging, thanks to its various moving parts that mean you have to create yarn hooks and solve puzzles on the fly. 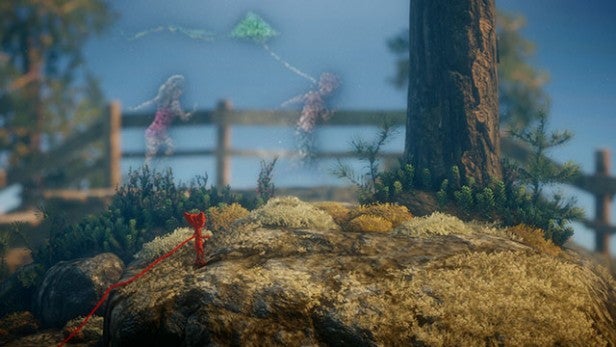 Throughout each level, the main aim is to collect a knitted button that will adorn the woman’s photograph album, with Yarny collecting memories along the way. There’s a strong story here, although it’s not narrated or thrust down your throat.

I believe the overarching storyline, though, is up to you to weave. For me it spoke of the aging process, the mental unravelling from age or illness, with Yarny helping to reconnect the threads that once were. 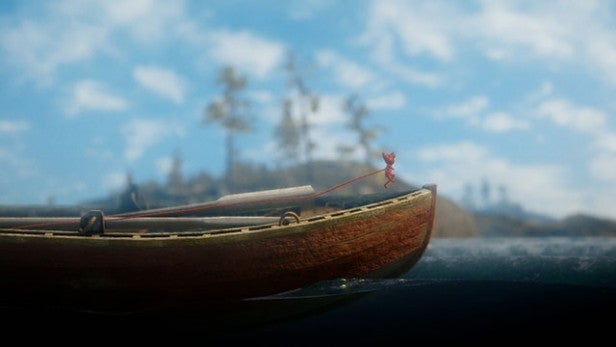 Unravel is a stunning little platformer that’s only really let down by its length. With only 12 levels, I blasted through Unravel in around four hours – however, I had played through several of the levels previously, which helped speed up my time. Realistically, I think you’re looking at around six hours of gameplay, but it’s worth remembering that this is only a £15.99 release. It just feels a little on the short side as you start hurtling towards the end levels. This could have felt less rushed if there was more of a difficulty curve, making sure you were really working for those final puzzles.

There are elements of replayability in the collectibles, but I can’t see many giving it more than a second runthrough.

Verdict
Unravel is a welcome change to the EA rosta and a lovely tale that will have you feeling all warm inside – like sinking into a warm bath that eventually gets a little cold with time. Yarny is an adorable and utterly believable lead who tells the aging woman’s story well, allowing you to embellish it with your own experiences.

It’s just a shame that there wasn’t a little more challenge in the later levels.