The best historical Total War so far, but it's overshadowed by Total War: Warhammer's fantasy stylings.

In Total War: Three Kingdoms, the generals commanding your armies stand towering over the trees, titans of war slowly circling each other ready to batter anyone that stands in their way.

This is what I think of, again and again, when I think about Total War: Three Kingdoms. If you’re playing the game on Romance mode — and you really should be — each of these titans is given prenatural combat abilities, able to single handedly cleave up an infantry without breaking a sweat. The Total War series, for the uninitiated, is a strategy game that plays out at a tactical and campaign level. Players take the role of a character, letting you run an empire while also dipping in to control its battles, using cavalry, archers and other units to flank, demoralise and even just stab your enemies.

For many of the games in the series, battle has been strictly historical. In Total War: Medieval you’re charging forwards with knights and catapults, while Total War: Shogun 2 brings samurai to the fray. But, developers Creative Assembly recently mixed things up with a licensed crossover with Games Workshop’s Warhammer franchise, switching out the samurai and knights with trolls, vampires and… honestly whatever a Terrorgheist is. 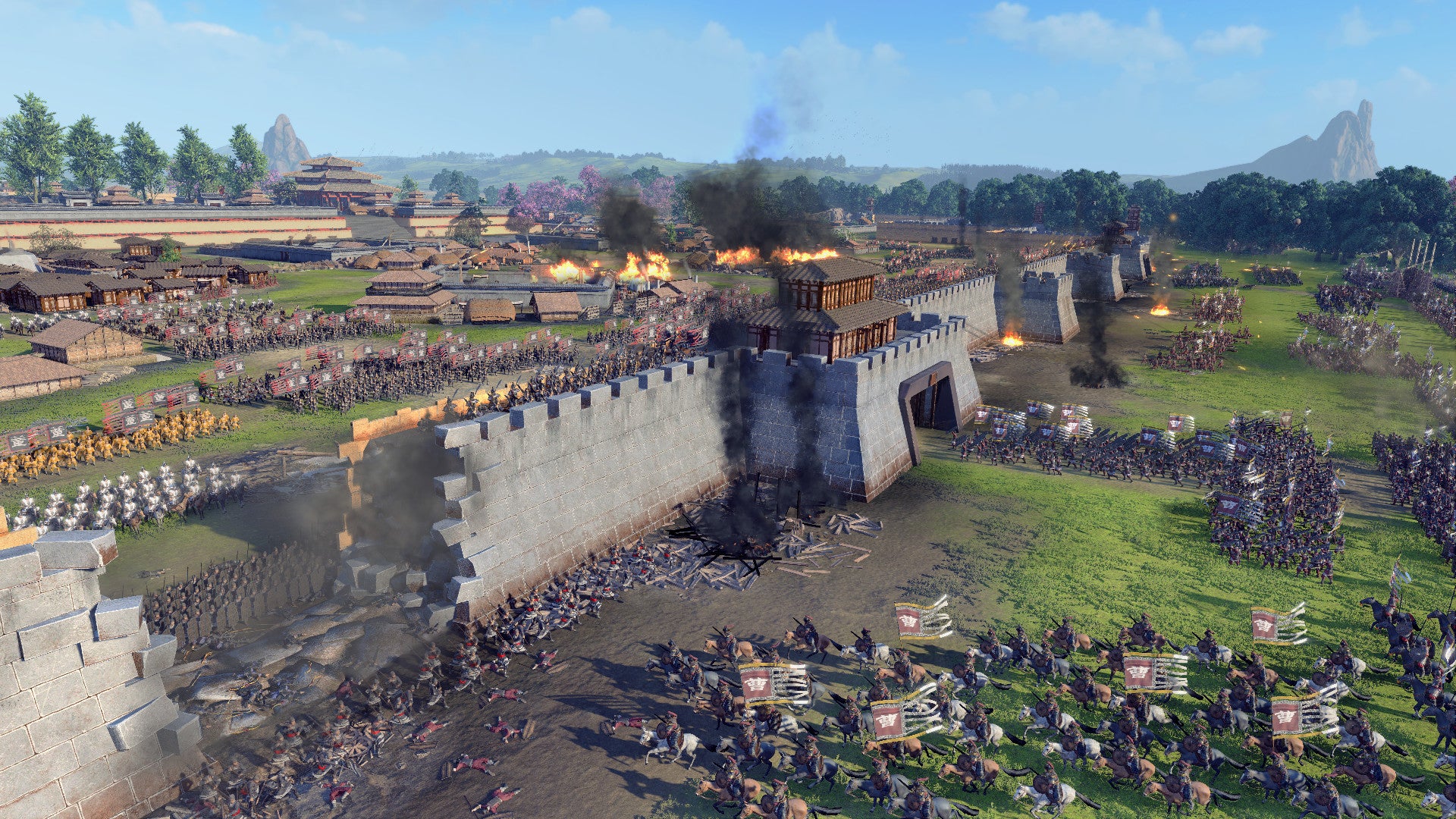 Total War: Three Kingdoms is a weird breed, a mix of the historical realism the series is known for, and the superhuman combat and abilities of Warhammer. Back to those titans, towering over the campaign map ready to do your bidding.

Players that jumped into the Total War series with the fantasy editions will find these heroes familiar to the faction heroes from Total War: Warhammer, who possessed devastating abilities. However, the heroes here are toned down, armed with brutal combat attacks rather than magic, and near superhuman endurance, rather than immortality.

Take these characters into battles and you’ll quickly see that despite these tweaks, in combat the characters still feel nearly superhuman. Total War veterans used to squishy commanders, flanked by elite guards, will quickly find themselves taken apart on the field. These heroes roam the field getting into scraps, decimating anyone they run into and keeping your attack held together with powerful morale boosts and passive abilities. They can be killed, or disabled, but it often requires serious firepower.

How do you stop an unstoppable force? By pitching him against an immovable object. Hero characters in Three Kingdoms can instigate duels, which will often see two generals facing off against each other, as combat swirls around them. Watching these fights is tense, as the victor of the duel can often decide the outcome of a closely fought battle. 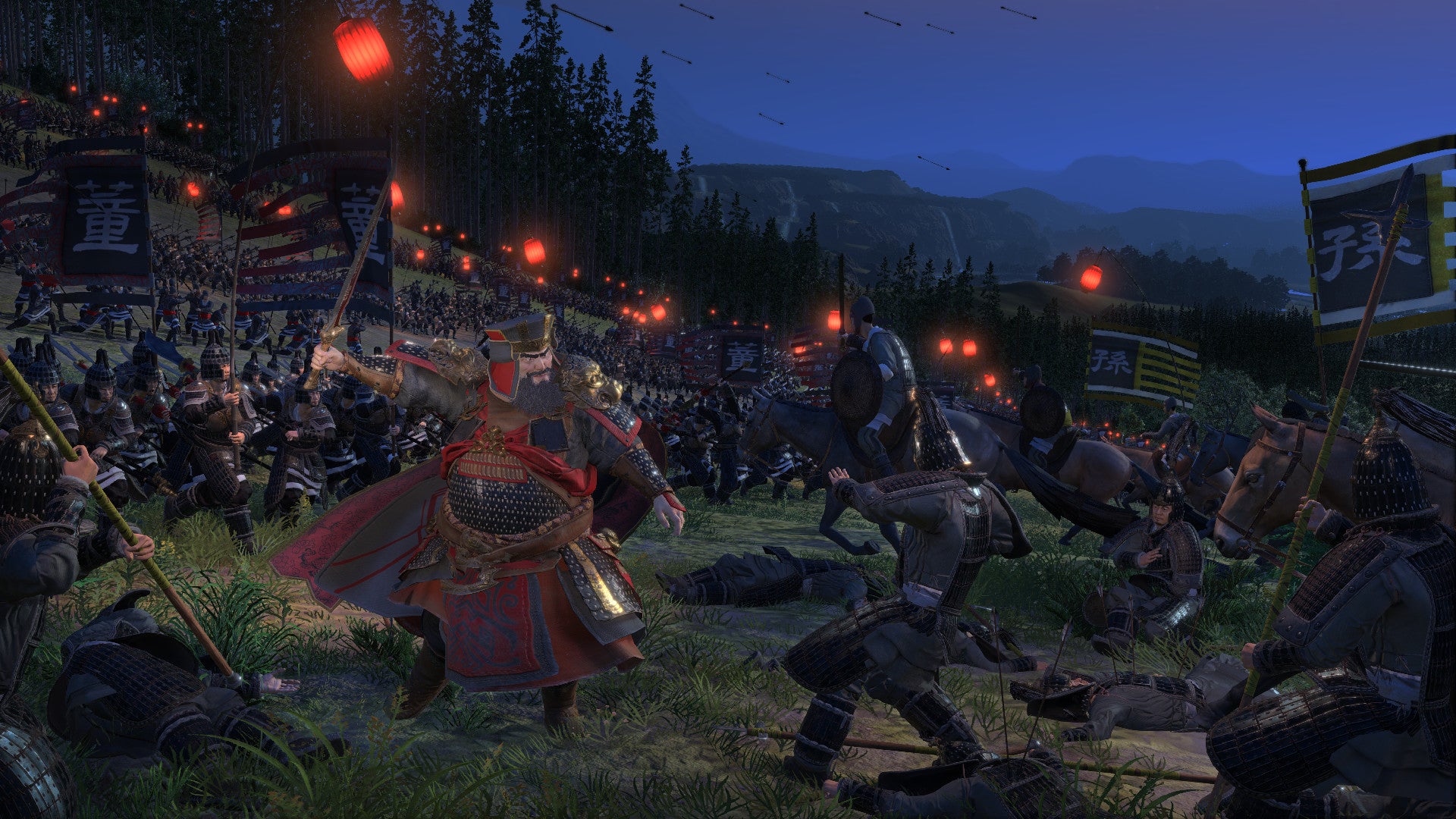 The setting is a rich place to explore some new ideas and Total War: Three Kingdoms proudly wears the marks of this experimentation. Every faction in the game has its own unique elements: Cao Cao can manipulate those around him into getting involved in proxy wars, while warlord Gongsun Zan has a military government with lots of military positions you can appoint characters into to keep them happy. The factions also have some unique units and buildings.

You’ve got a couple of different modes to play in. Romance of the Three Kingdoms is the mode that brings mythical elements to the fore, and it’s clearly the way the game was designed to be played, while Records of the Three Kingdom strips the myth away for something that will feel more familiar to players who want the game to feel strictly historical.

However, when Creative Assembly moved into fantasy, they opened Pandora’s Box. While I’m loathe to come back to Total War: Warhammer again and again, every faction in that game played completely differently, whether they were Lizardmen, several species of elves, Dwarfs or even Undead. No matter who you played as, you were also fighting against several other species, meaning you got varied and different combat in each fight. However, here everyone is basically the same when you take the field against them.

The tactical depth is decent but once you’ve pasted a few different factions, the battles all tend to blend into one. This is tough, because as you go around the map hoovering up the smaller factions, you grow in power and resources and establish bigger and bigger armies. Suddenly, every fight is huge, and because you’re bringing all of your forces to bear in each fight, it starts to feel repetitive. Away from the battles, the simulation is imprecise. Total War is a game about war, and the diplomacy and management aspects are skeletal, largely serving the primary goal of the game: smushing units of ancient Chinese soldiers together to murder each other. However, if you’re here for the civilisation management, this isn’t your game.

The game’s tech tree is nice, well stylised and delivering meaningful choices. The game delivers you a tech upgrade every handful of turns, and you can use it to break down several different tech trees, which can boost your military (war), tax collection (money for war), public order (keeping people happy while you’re doing war.).

For Total War fans, there’s lots here to enjoy. It’s the best historical Total War game since Shogun 2, and one of the finest this series has seen thus far. However, for those drawn in by the bombast and spectacle of Total War: Warhammer, this game can feel flat by comparison.

Beautifully presented, this is a treat for history fans, but it might leave other players slightly cold. A step back for a franchise that felt on the edge of mainstream success, but series veterans will feel right at home.