The last part of Toshiba’s new Cloud TV system warranting our attention is its smart device app support. As noted earlier, the breaks down into two separate apps: the Toshiba MediaGuide App and the Toshiba Cloud TV app. Or rather, that’s how they break down for iPad/iPhone users. Android owners currently only get the MediaGuide app, with Toshiba not currently being able to confirm when a Cloud TV app for Android might appear.

We always find this sort of mixed platform support disappointing. After all, why should you be penalised by a TV brand for the smart device eco system you’ve chosen to embrace? 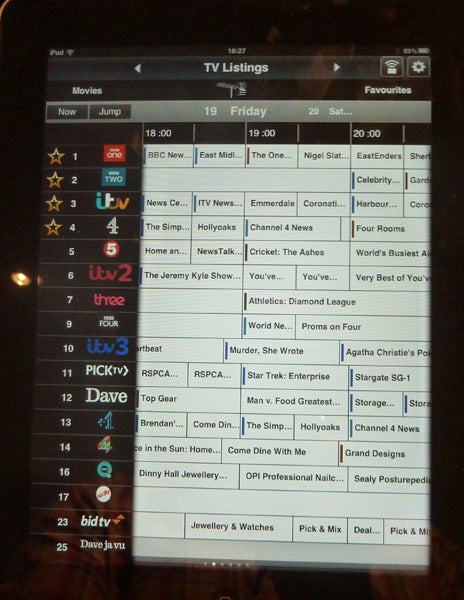 Strictly speaking, the Cloud TV app is only available for the iPhone at the time of writing, with iPad users having to download the phone version and double the app’s window size.

The only upside to the lack of an Android Toshiba Cloud TV app at the moment is that its functionality is currently so limited that it’s not necessarily a great loss to Android users. Basically it just lets you control the TV via your smart device using an on-screen remote emulator, and lets you set or retrieve events on a calendar you can share with the your TV.

If Toshiba ever manages to follow LG’s lead and allow you to upload multimedia content to a storage cloud for easier sharing between your TV and smart devices then the Cloud app could become much more of a potential loss to Android users. But Toshiba claims to have no such cloud multimedia plans in its immediate pipeline.

The MediaGuide app is much more interesting and useful. For starters, so long as you only install it after first running autotuning on your Toshiba TV, it pairs your TV with the app and then retrieves your TV’s tuner data, so that it can present it as an electronic programme guide on your Smart device. There’s a box alongside each channel you can select to make it a ‘favourite’ too, to streamline your channel surfing. 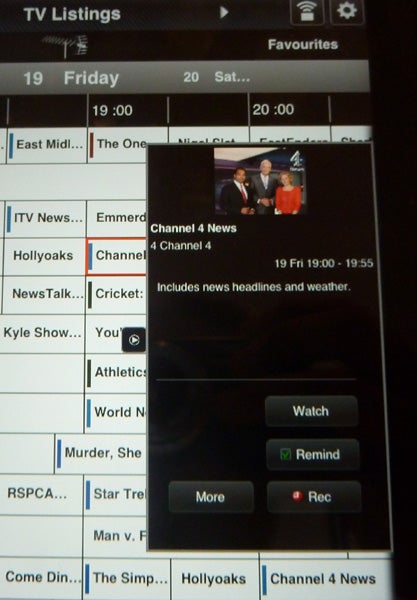 You can also set a parental control system on the app so that adult programming can only be accessed after inputting a four-digit pin.

Once setup is complete, you’re presented with an attractive on-tablet EPG that you can scroll/swipe around far more quickly and accurately than you could ever hope to navigate the EPG on the TV. You can select a programme on the app to watch now and the channel on the TV will change accordingly, or you can use the app to set an on-TV reminder for an upcoming show.

If you have a PVR connected to the TV, you can also use the app to schedule a recording on the TV of an upcoming broadcast. It’s kind of like the Sky app, in other words, but without any subscription costs.

Selecting a programme on the MediaGuide app also calls up a box showing further text info on the show, while a ‘More’ option here sees the individual programme information expanding to take over the whole screen and the appearance of further options based around searching for web references, online images and videos related to the programme you’re exploring.

As well as being much faster to navigate than the on-TV listings systems, being able to explore TV listings on a second screen without disrupting what’s been shown on the main screen feels so natural that it quickly becomes your default position for hunting down stuff to watch. 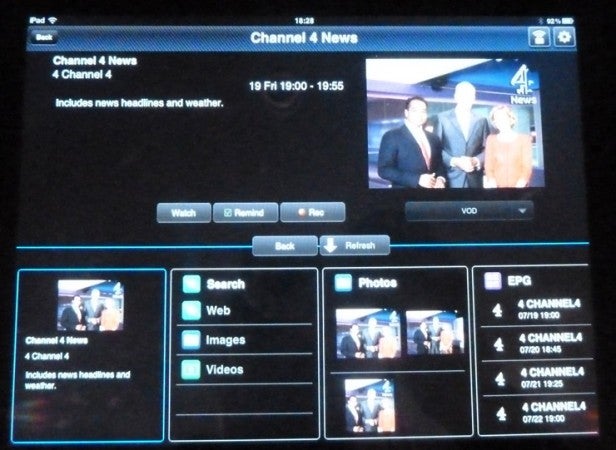 The MediaGuide isn’t exclusively a TV listings portal, as it also provides a few handy remote control options for controlling the TV. These remote emulation tools available aren’t as fulsome as those found on the Cloud TV app, though. For instance, the Mediaguide remote controls don’t extend to a touchscreen navigation system.

It’s worth noting, too, that neither of Toshiba’s current apps provide facilities for easily sharing multimedia content between your smart device and the TV. You thus have to use your TV menus as the centre of operations for that sort of operation. It’s also a shame that you can’t stream what’s showing on the TV tuner to your smart device for second screen viewing like you can with the latest Smart TV systems from Panasonic and Samsung. We’ve checked with Toshiba, moreover, and the brand currently has not plans to introduce this sort of functionality. 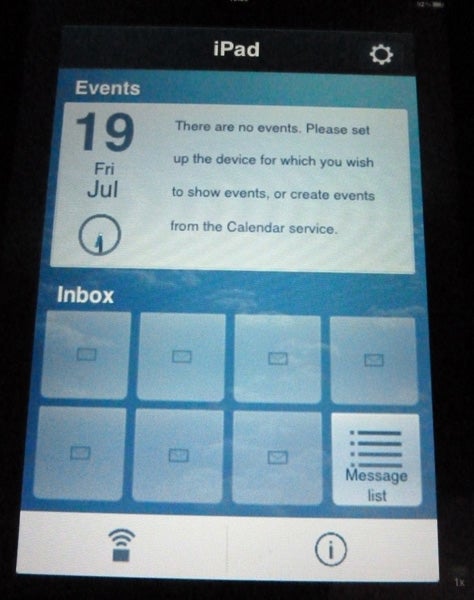 One further issue is that the Mediaguide app crashed frequently during our tests, with the most common problem being a broken connection with the Toshiba TV – the recently reviewed 40L6353 – we were testing the Cloud TV system on. We’d keep getting a message saying that we needed to re-register our TV with the app, yet when we attempted to do this the re-registering options didn’t do anything, leaving us unable to get the app to communicate with the TV. But then after a while, the connection would come back online again by itself, for no clear reason.

Clearly this sort of stuff is very frustrating and will certainly put people off engaging with Toshiba’s Cloud TV system. So as with other previously discussed issues, we can only hope that these sort of issues are quickly resolved before too many people are exposed to them and thus don’t give the system the time and attention it mostly deserves.

Should I buy into Toshiba’s Cloud TV System?

What we’re effectively asking here is whether Toshiba’s Cloud TV smart system is so good that it’s a truly compelling reason in itself to buy a Toshiba TV. And the short answer to this would be that in its current form, no, it isn’t. It’s a bit buggy, a bit sluggish, it doesn’t support second-screen viewing and its online component is low on content versus its biggest rivals this year.

That said, some of its features – the MediaGuide app in particular – ensure that Cloud TV is a much more rewarding, easy to use smart TV platform than anything Toshiba has shown before.

Although it’s far from the prettiest, fastest, most stable or most content-rich Smart TV system we’ve seen this year, the Toshiba Cloud TV platform introduces some pleasing innovations and – aside from when bugs get in the way – is extremely easy to handle.