After a longer than expected wait, the first TV from Toshiba to sport the brand’s new Cloud TV system is finally here. The 40-inch 40L6353 also enjoys a slim, lightweight design, 100Hz processing, DLNA multimedia playback, and most excitingly of all, a price tag of just £430. Though you should note that as with the recently tested Sony KDL-42W653A, this aggressive price comes at the expense of any 3D support. 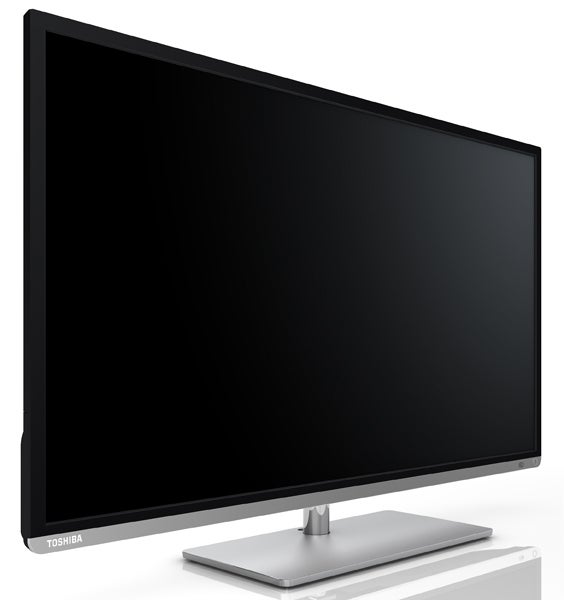 Read our best TVs round-up for our top picks from 2013.

Toshiba has enjoyed plenty of success in recent years from the
simple formula of delivering really stylish looking TVs at knock-down
prices. So it’s no surprise to find them continuing with this policy,
delivering with the 40L6353 a fashionably slim bezel that’s only just over one centimetre across, as well as a reasonably trim rear, and a striking
colour combination of a deep grey for the main bezel offset by a light
silver flash along the very bottom edge.

If you look closely enough you notice that the finish is a bit plasticky compared with many of the more expensive TVs in town. So don’t look too closely!

Where connectivity is concerned, the 40L6353 exceeds expectations for such a cheap TV by providing highlights of four HDMIs, two USBs, built-in Wi-Fi, and built-in Intel WiDi for direct wireless connection of compatible PCs. It’s worth remembering, by comparison, that the £550 Sony 42W653A only had two HDMIs and one USB port.

It’s worth adding before we move on, too, that one of the HDMIs offers MHL support, for HD playback from compatible smart mobile devices.

The network connections can be used for streaming video, photo and music
files from DLNA devices, or they can be used for taking you online with
Toshiba’s interesting Cloud TV platform. As we have with the new Smart
engines from all the major TV brands this year, we’ll be looking at
Toshiba’s latest efforts in a separate feature in the coming days, but
we’ll quickly run through some of the highlights here. 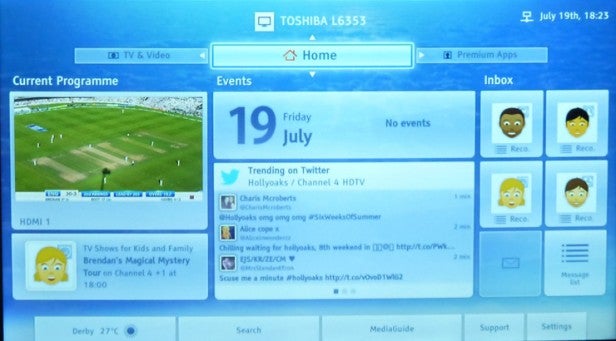 The presentation adopts the multiple themed screen hub approach also used by Samsung and Panasonic this year, and the themed divisions are reasonably logical.

Among the more interesting touches are a large Twitter box on the Home page, which automatically presents feeds relating to the three most ‘trending’ TV shows currently being shown, as well as options for finding other TV-related feed lines; a handy recommendations system where you’re shown suggested highlight programmes culled from the electronic programme guide based around themes like sports, movies, and kid’s shows); the facility to search EPG listings via a neatly designed Smart app and select programmes to watch or record to USB HDD; and the ability to access a calendar/appointment schedule shared over the cloud with your smartphone or tablet computer.

Content wise key services include Netflix, the BBC iPlayer, Blinkbox and KnowHow Movies. But there’s no LoveFilm support, no 4oD, no ITV Player, and no Demand 5, leaving it in the current Smart TV second division where video streaming options are concerned.

Other negatives are that the Cloud TV OS is a bit sluggish in places, and that the remote control is a bit tricky to use when you’re trying to navigate around the Smart menus.

Overall, though, it’s good to see Toshiba coming up with some fresh Smart TV ideas, even if not all of those ideas work entirely successfully. 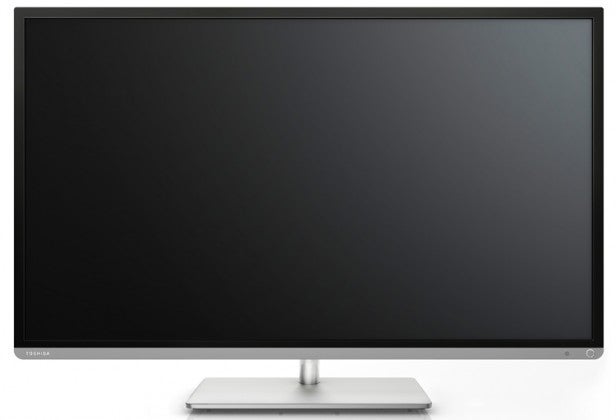 Inevitably given the skinniness of its frame the 40L6353 uses edge LED
lighting to illuminate a full HD panel. There’s no local dimming system
to aid contrast production, but as Samsung and Sony have proved, you
don’t always need local dimming to deliver excellent TV contrast
performances.

The 40L6353 also only provides a 100Hz motion
effect, which looks pretty meagre compared to the huge (in some cases
‘1000Hz’ plus) panel driving figures conjured up by many rivals this
year. But again, this doesn’t necessarily have to be a major concern on
such an affordable TV provided the core panel’s response time is up to
snuff.

Heading into the
40L6353’s onscreen menus uncovers some promising extra tricks. For
starters Toshiba’s Resolution system is on hand to upscale standard
definition sources and even sharpen HD ones – though it will be
interesting to see if this still looks as effective in its results as it
used to, given how far some other upscaling engines have come in recent
times.

Toshiba’s recent TVs have
delivered a rather bewildering range of performance standards over the
past couple of years, so it’s hard to predict how this first model from
Toshiba’s latest 2013 range will shape up.

Used as the main TV for the review period
Tested for more than a week
Tested using industry calibrated tools, discs and with real world use
Tested with broadcast content (HD/SD), video streams and demo discs
Next
Picture Quality and Verdict Review