In the centre of the Hub homescreen is a list of messages/events you may have stored earlier using either the TV or the Cloud TV app. More interesting is what sits underneath – a Twitter window.

This shows three Twitter feed lists associated with the top three trending, currently-showing TV shows. But you can also search for feeds aggregating tweets around other programmes, including most usefully the one you’re currently watching.

The algorithm Toshiba has created for collating threads for the Twitter window requires a certain level of traffic and relevance on Twitter, and only operates with shows that are on air or are about to be on air within 15 minutes. So it’s possible that if Twitter activity is low for a particular time slot then you might not get any Twitter feeds showing. This only happened on a couple of occasions during our tests, though. 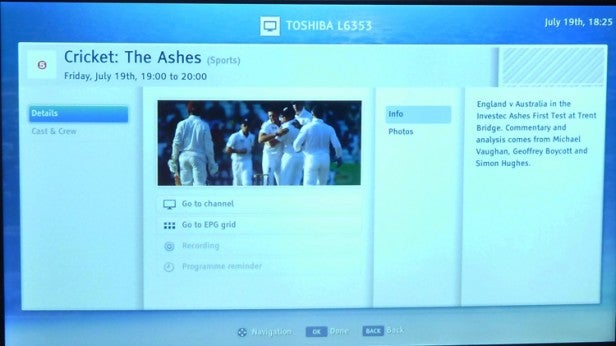 We couldn’t see a way to associate our Twitter accounts with the TV, meaning that the Twitter window is a passive extra dimension to what you’re viewing, rather than something you can get directly involved in with your own tweets.

To be honest, though, this doesn’t seem like a bad idea. After all, the TV remains a fundamentally passive medium. People who feel tempted to get involved with  what they’re watching generally turning to their phones or tablet computers to interact with social networks, rather than wanting to disrupt their TV viewing by using tedious onscreen keyboards to type in a message that way.

Along the bottom of the screen are a selection of further links, kicking off with a live weather report showing temperature and conditions for your area (once you’ve told the TV what your area is, of course).

Next to this is a Search tool to help you track down specific programmes or celebrities on both the TV guide and what Toshiba describes as ‘our best’ VOD partners. Where ‘our best’ means, of course, those on-demand services Toshiba has actually done partnership deals with.

Unfortunately, it’s bare at present. Toshiba claims the on-demand part of the search engine will start to be much more useful from September 2013, when various VOD partners – including, apparently, the BBC iPlayer – will come online with Toshiba’s system. It’ll let you search for a movie or TV programme across multiple platforms, in theory at least.

Impressively the search engine is ‘progressive’, so that with every extra letter of a search term you type you’re presented with a series of suggestions offering a potential shortcut to the content you’re looking for. If the programme you want appears in the suggestion box, you can just scroll up to the option and select it. 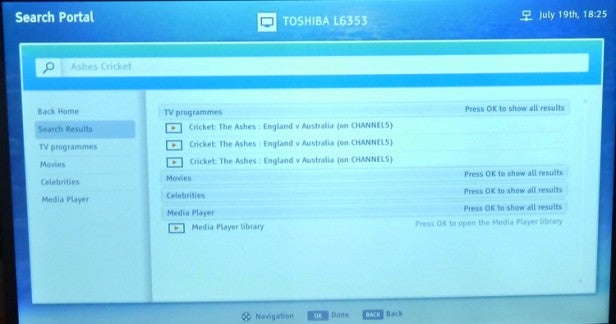 Once searching is complete you’re taken to a separate results screen where results are broken down into TV programmes, Movies, Celebrities and Media Player Library.

Select a result and you usually get a still from the show, info on the show if it’s available from any of Toshiba’s Metadata providers (including Rovi), and also both further stills and cast and crew information if those are available. You can link straight to the programme you’re looking at information on if it’s currently showing, or jump to it on the EPG grid for, say, setting a reminder or recording.

The graphics on these search results pages are a bit basic looking, though, and the amount of information available is frustratingly inconsistent. Sometimes, oddly, even the option for finding a programme on the EPG grid is greyed out.

Hopefully this sort of inconsistency will reduce over time as Toshiba irons out wrinkles in its new system.

Next to the Search icon on the bottom icon row is a Media Guide link. Selecting this throws up three key options: an EPG Grid, a Movie Portal, and a TV Portal. The EPG Grid is, as its name suggests, the TV’s onscreen electronic programme guide. And very attractive this EPG is too, with a neat colour coding system for different content genres as well as an effective filter system and extremely neat and tidy channel icons to further enhance the visual presentation.

The TV portal is a rather cool alternative presentation of the EPG guide with a greater focus on programme rather than just listings. It essentially shows details – with nice photo graphics where available – of programmes of different genres showing now, along with how many minutes that show has been running for. You just select the icon for a programme to start watching it.

The Movie portal section of the Media Guide sadly isn’t working at the moment. When it does open for business though (hopefully in September), it will presumably offer a similar kind of deal to the TV portal, but with an emphasis on VOD. 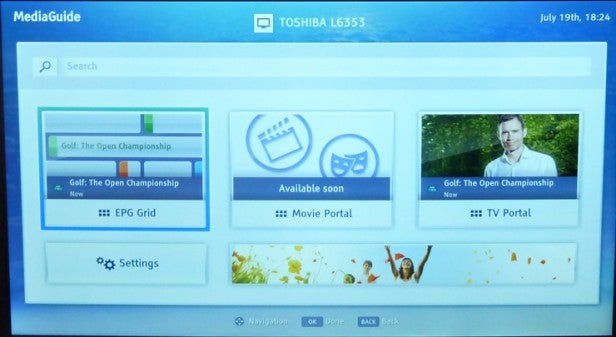 Moving away from the Home page, we get to the Premium Apps page. This is very attractively presented, though it’s a pity that the large box at its centre is essentially just an advertising portal for the likes of Netflix (though Toshiba would prefer us to think of it as a way of showcasing its Cloud TV features).

A smaller box below the main ‘showcase advert’ advertises key services among the Premium Apps. To the left are eight featured apps, with a separate tile for accessing more. The immediately accessible ones are Netflix, the BBC iPlayer, the Deezer subscription music platform (including playlist support), Blinkbox, Youtube, BBC Sport, BBC News, and Viewster, while pressing on the More adds KnowHow Movies, LiveSport.tv, VIMEO, iConcerts, FunSpot, Woomi, Euronews, DailyMotion, and Aupeo.

While this content list represents a slight step forward for Toshiba versus its very limited 2012 Smart offering, though, it could still do with quite a bit more, especially when it comes to the UK’s key catch-up TV services (the ITV Player, 4oD and Demand 5), and LoveFilm.

The situation is improved slightly by the discovery under a Tools header on the right of an internet browser, a Skype app, Intel WiDi connectivity, My Content (which shows video, photo and music apps on your connected devices), My Recordings (which looks at what you’ve got recorded on your PVR), and My Reminders (which shows what you’ve got on the EPG). But video streaming still remains king where on-TV online services are concerned, and Toshiba has work to do to bring its support for these up to speed with some rivals.

Switching to the TV & Video hub page, it’s initially surprising to find this essentially re-ordering the same content (for different emphasis) that was shown on the Premium Apps page.

The seeming repetitiveness between these two different menus, though, becomes much easier to comprehend when you think about it in the context of how little content Toshiba’s Smart TV platform has. Basically, Toshiba can only fill the content link boxes available on its hub with what content it has. And at the moment it doesn’t have very much. 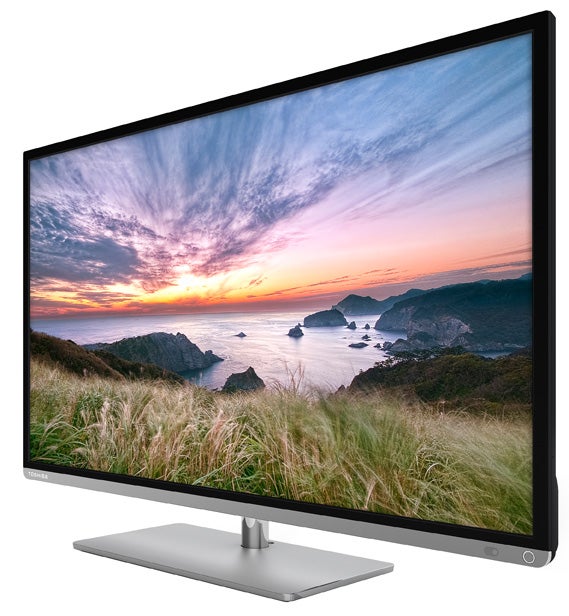 Hopefully, the interface will become much less repetitive and much more useful as more content comes online.

From the above comment, you probably won’t be surprised to learn that the final Other Categories hub is currently very similar indeed to the previous two we’ve discussed. So much so that between this fact and the obviousness of its name, this part of the hub doesn’t really warrant any separate discussion.

The repetitiveness of the current menus isn’t their only flaw either. We’ve mentioned already one or two menus that look rather basic, but a much more irritating flaw is the sluggishness with which the Cloud TV interface tends to respond to button presses.

As well as frustrating impatient folk like ourselves, this sluggishness can cause you to accidentally select the wrong option at times, as you think the TV hasn’t received a command when it actually has but just hasn’t got round to reacting to it yet.

It feels limiting too, after the efforts of some rival Smart TV systems this year, to find that you can’t customise the layout of any of Toshiba’s various smart hubs. When asked about this Toshiba claimed that it’s looking into ways to make this possible, but we didn’t get a sense that any results of their research were particularly imminent.

Another moan is that our test sample suffered a number of Cloud TV-based
system crashes – especially when trying to sync with the Cloud app on
our iPad. We can but hope that the system’s bugs get ironed out by
firmware updates sooner rather than later.

Used as the main TV for the review period
Tested for more than a week
Tested using industry calibrated tools, discs and with real world use
Tested with broadcast content (HD/SD), video streams and demo discs
Previous
Toshiba Cloud TV Review Next
Apps and Conclusions Review