Introduction
With the exception of the Aiptek 3D i2, 3D camcorders have been very much a premium item. Neither Sony nor JVC offers true 3D camcorders for less than £900, although Panasonic has midrange models that can be upgraded to 3D for an extra £3-400, and Sony’s Bloggie range does contain a 3D option. Toshiba, however, has taken its usual budget-oriented approach and brought out a 3D camcorder for under £200. The question is, how did Toshiba manage to make the Camileo Z100 so cheap?

Amazingly, Toshiba has chosen not to take the obvious route of a split lens path and single sensor. Instead, two 5-megapixel CMOS sensors with back-side illumination technology are used, with each one a decent 1/3.2-inch in size, and a separate lens apiece. In 2D mode, only the left-hand lens is used. Unfortunately, though, one of the chief benefits of using two separate lens paths has not been implemented. The Toshiba Camileo Z100 doesn’t offer an optical zoom, instead relying on the digital variety. This offers a 10x factor in 2D mode and 4x in 3D mode. However, being digital, it reduces image quality when used, so we wouldn’t recommend it in either context. Fully zoomed in, the picture appears to be crawling with stray pixels. 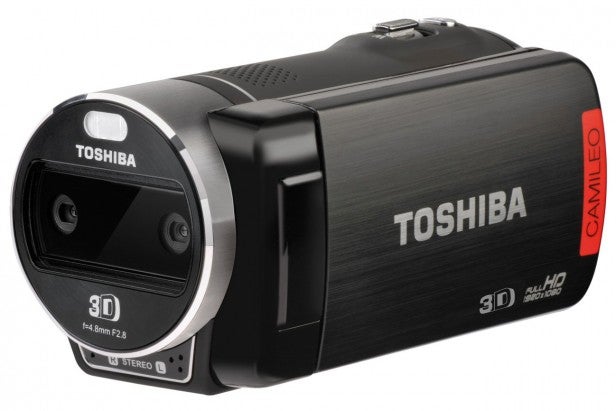 Toshiba Camileo Z100 Features
Footage can be recorded at up to Full HD (1,920 x 1,080p) with 30 progressive frames per second, although there are also 720p HD modes at 30 and 60 frames per second, as well as VGA at 30 frames per second. However, despite the discrete lens paths, the 3D is actually recorded in side-by-side format, so two frames are squashed next to each other into one. This reduces horizontal resolution by half, negating some of the benefits of having two separate sensors and lenses. Still images can be grabbed at up to 16-megapixels, with a resolution of 4,608 x 3,456p. This obviously uses a fair amount of interpolation, so the Toshiba Camileo Z100 isn’t the sharpest of stills shooters.

Whilst there is just 128MB of Flash memory on board the Toshiba Camileo Z100, really only enough to grab 30 seconds or so of footage to make sure things are working, the device, as expected, cames with an integrated SDXC memory card slot. The top data rate equates to about 12Mbits/sec, which will mean you can fit 11 minutes of footage per gigabyte of storage. There aren’t any settings for quality other than the resolution, but the rate of 12Mbits/sec balances reasonably well between being too aggressively compressed and taking up too much space per second.

The 2.8in screen uses parallax barrier technology to provide glasses-free 3D viewing, which is reasonably effective when looked at from the appropriate distance and angle, but will make you cross-eyed for close objects. It’s not particularly high resolution, either, offering only 96,000 pixels – orders of magnitude less than the 2.07Mpixels used by Full HD. The LCD is the main focus for the Camileo Z100’s rather limited range of manual features, too. It’s a touch screen, and not one of the most responsive we’ve used either. The menu uses an icon-based system, with Toshiba’s usual split between video and photo-specific settings, and effects which can be used in both modes.

Toshiba Camileo Z100 Menu
With a quick menu at the top of the Toshiba Camileo Z100, you can easily toggle backlight compensation, switch shooting resolution, and turn on the video light. The full menu provides action to the motion detection option, where you can set the camera to record automatically when it notices something move in the frame. You can enable face tracking, turn on a slow motion mode, as well as a time-lapse facility which can grab a frame every one, three or five seconds. What’s more, a pre-rec facility features to help you avoid missing a shot whilst the ability to print the date on your footage is also available. 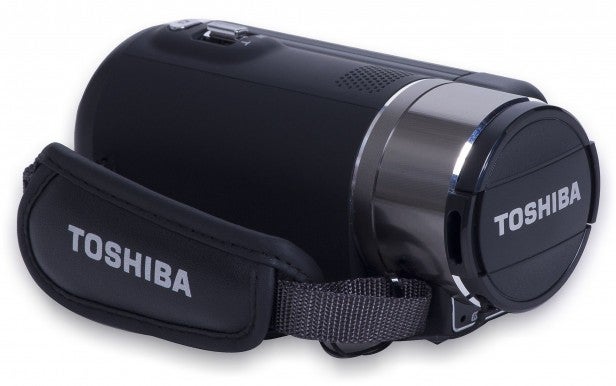 Head for the effects area, and there are centre and spot-weighted options for exposure, but no manual control. Scene modes include soft skin, night and backlight compensation – so not what most manufacturers include in this category. Finally, there are white balance presets for daylight and two types of indoor illumination, but no manual option. In fact, you can’t adjust exposure, shutter or focus manually at all.

Toshiba has, at least, made some regularly used settings easy to reach. We have already mentioned the quick menu, but switching to 3D mode is also incredibly speedy, as there is a discrete button on the side of the unit beneath the LCD flap for this purpose. There’s also a button for toggling between normal mode, digital light (a video gain boosting setting) and turning on the built-in LED video light. As usual for Toshiba, a decent selection of accessories is included, such as a carrying pouch and even a cable for linking the Toshiba Camileo Z100’s mini HDMI port to a TV’s full-sized one. 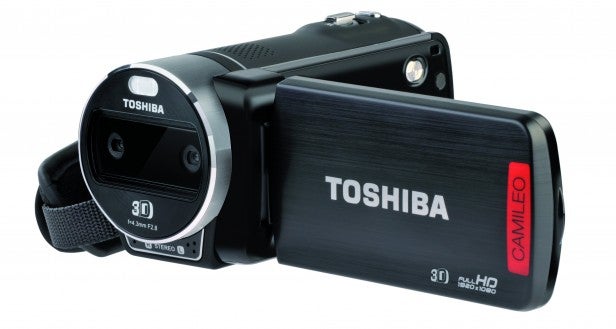 Toshiba Camileo Z100 Image Quality
The Toshiba Camileo Z100’s performance in optimum conditions is decent enough, with even Toshiba’s usual problems with contrast not too serious in this case. Colour fidelity is also reasonable, as is the level of detail, although there is a little softening from the compression.

The Toshiba Camileo Z100 doesn’t fare as badly in low light as you might expect of a 3D camcorder costing under £200, either. The image is bright in both 2D and 3D, with little obvious difference between the two, almost certainly thanks to the relatively large back-side illuminated CMOS sensors. However, the colour is also quite washed out, and the lack of an optical zoom will severely hamper shooting abilities. Since footage is captured as MP4, it’s readily edited by most popular applications. However, if you want to handle 3D, you will need software which supports the side-by-side format, such as CyberLink PowerDirector 11.

Toshiba Camileo Z100 Verdict
Toshiba is to be commended for producing a 3D camcorder for under £200 that isn’t a complete gimmick. The Toshiba Camileo Z100 is cable of shooting reasonable, if not great 3D footage. But this is still a considerably limited device, mostly due to its lack of an optical zoom even in 2D mode. The manual settings aren’t exactly extensive, either, and the side-by-side 3D format reduces 3D image quality noticeably. If you really have to shoot 3D, the Toshiba Camileo Z100 is very cheap. But if you can forego the third dimension, around £200 will get you much better video recording results if you spend it on an exclusively 2D model, such as the JVC HD Everio GZ-E205.