JVC has always been the most unusual of the traditional big four camcorder brands. Someone at the company has clearly taken the old advertising adage about zigging when others zag very much to heart. Where most of its competitors focus on their premium offerings, JVC seems to give a little more attention to its budget range, which has paid dividends with the success of models such as the Everio GZ-HM445. So whilst JVC’s HD Everio GZ-E205 is no headline act, it is a budget model which seems a little more finely honed for its target audience than some.

The base specification is relatively modest. The sensor is a small 1/5.8in CMOS with just 1.5MP. But it is also a back-side illuminated unit, which means it will be more sensitive in low light than a standard CMOS. The resolution is a little below that required for the Full HD video the E205 shoots at its top quality setting, but JVC has taken full advantage of the AVCHD recording format used and offers 24Mbits/sec as the maximum data rate. With a 64GB card installed in the SDXC slot supplied for storage, there will be space for around six hours of footage. The E205 can shoot standard definition video as well, with two quality options. The low sensor resolution also makes for modest digital photography abilities, with 1,920 x 1,080 the top resolution for stills, and even that will include some interpolation.

The small sensor does have one benefit, though. For optical reasons too complicated to explain here, a smaller sensor makes a larger optical zoom possile in a smaller space. In the E205’s case, despite the camcorder being one of the smallest handycam-format models on the market, it still manages a hefty 40x optical zoom. There are 80x and 200x digital zooms also on offer, but as always we would recommend ignoring these and leaving them turned off, as they reduce image quality noticeably.

Image stabilisation comes in the form of JVC’s Advanced IS, which has two settings. There’s a standard general-purpose mode, plus an additional setting. This is tuned for the lower-frequency, but more pronounced undulations of shooting whilst walking. We found this mode was pretty effective at its intended task, although it crops into the frame noticeably. This will mean a reduction in image quality, so this mode should only be used when needed. On the other hand, standard mode is not as effective as some optical systems at smoothing vibrations when zoomed in. 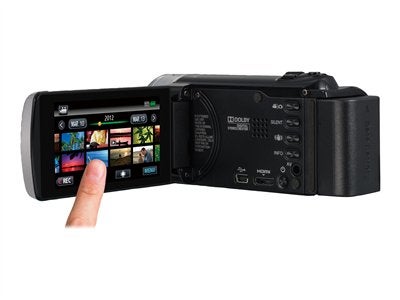 The E205 doesn’t excel in manual features, either. In auto mode, the quick menu primarily consists of JVC’s unusual animation effect, accessible by a large button in the centre of the touchscreen. This lets you superimpose moving particle effects over your video as you shoot, such as sparks or hearts. It’s an impressive capability for a budget camcorder, but not necessarily one we’d recommend using often. It’s easier and more effective to add this kind of effect at the editing stage.

Even when do switch to manual mode, you will need to delve into the main menu to access the usual settings. Manual focusing is available, although getting this pin-sharp using the touchscreen is quite a trial. You can also configure white balance manually, with presets for sunny or cloudy outdoor conditions, plus halogen indoor lighting, as well as fully manual. There are also two underwater options – Marine:Blue and Marine:Green – although this is not a waterproof camcorder, so we’re not entirely sure when you would use them, unless you purchase a diving housing. You can also adjust brightness between 2 and -2EV, but no separate control over shutter and iris is available.

There is a selection of AE/AF touch modes on offer, too, including face tracking, colour tracking, and area select. Strangely, however, only two scene modes are available – the Nightalive night mode and Spotlight. Also annoying is the position of the backlight compensation and tele macro settings, on the second page of the menu, making them slow to get to. There’s a built-in LED video light as well, though. It’s not very powerful, with a range of just a few metres, but it could come in handy occasionally. There’s a time lapse mode, which can record a frame at intervals of between 1 and 80 seconds, but no option to shoot high speed video for a slow motion effect. You can also set the camera to record automatically when it detects motion – potentially useful for capturing an animal entering its lair (light permitting), or a thief entering your home. 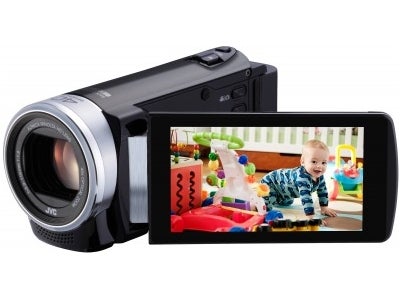 Despite its modest abilities in many areas, the E205 still manages to achieve generally commendable video quality. Colour reproduction is good in bright lighting, but if you study the image closely you can spot a mild lack of detail compared to the best camcorders on the market. In poor illumination, the image is surprisingly bright and colourful, though. The auto white balance isn’t always spot on, but the back-side illuminated sensor is clearly working its magic here. Overall, the E205 provides good video quality for the money, especially in low light, which is the main necessity for a budget point-and-shoot camcorder.

The JVC HD Everio GZ-E205 doesn’t have any unique abilities like the wifi features of the https://www.trustedreviews.com/jvc-hd-everio-gz-ex215_Camcorder_review HD Everio GZ-EX215. It’s rather limited when it comes to user control, too. But it’s also able to produce good video quality for the money, and the massive optical zoom puts candy-bar camcorders to shame. So this is not a groundbreaker, but still a great value budget camcorder.