Whatever your feelings on the matter, now that HDTVs have reached critical mass the audiovisual industry is searching for the ‘next big thing’, and that ‘thing’ appears to be 3D. Scarcely a single kids’ movie is now released without a 3D version coming out first, and you already have a choice of widescreen TVs available to replace the 40in HD model you bought last year, such as Samsung’s UE55C8000. Now, already, it’s becoming possible to create your own 3D content, with Panasonic announcing a 3D camcorder. But our first experience of the concept comes from a more surprising source – Taiwanese Aiptek. The 3D i2 not only provides an extra dimension for your video, but incredibly does so for under £200.

The Aiptek 3D i2 is essentially a pocket Internet camcorder, although it’s a little bigger than most in this genre. So it’s very limited on features. Inside is a 5-megapixel CMOS sensor with a healthy 1/3.2in diagonal. This provides still images up to 2,592 x 1,944 pixels, but video is only available at 720p and 30 frames/sec. Feeding the sensor are two lenses situated either corner at the top of the device. When shooting in 3D both are used, but only one is called upon for 2D.


The lenses are fixed, so there’s no optical zoom. Aiptek provides a 4x digital zoom operated by pushing the joystick on the rear in the vertical direction, which will reduce image quality when used. That is pretty much the only feature, too. The other four buttons are for switching between 2D and 3D modes, deleting clips, toggling record and taking still images. Pushing the joystick right calls up the very limited menu of options. This merely consists of a few settings, the most exciting of which is setting the frequency to avoid light flickering. There are no manual controls to speak of, no scene modes and really nothing that will require attention after initial setup.

So the i2 is very much a point and shoot camcorder. As soon as you have it out of the box, you’ll be looking for things to show off its 3D capabilities, such as objects moving towards the camera or which extend outwards away from it. The lenses are fixed focus up to 1m away, so once objects approach closer than this they tend to go out of focus, and there’s no macro mode available to compensate.


The i2 doesn’t come with any recording memory built in, so you will need to add a SDHC card to the slot. Since its video requires around 7Mbits/sec in 3D mode and under 3Mbits/sec in 2D mode, an 8GB card will be enough for 2.5 hours of 3D and over six hours of 2D footage, so you won’t need to purchase particularly large capacity media.

Once you’ve shot your footage, you have two main options for viewing it. The i2 has a built-in mini HDMI socket, and a cable is supplied in the box to hook this up to a full-sized HDMI socket on a TV. However, whilst you can send both 2D and 3D signals to any TV, the 3D is sent in ‘side-by-side’ format, so the two video streams, which provide the images for each eye, are squashed horizontally and presented in one frame. The side-by-side format is one of the standards for 3D TV, so currently shipping 3D televisions can display this properly. But a 2D-only TV will merely display the squished frames as recorded. 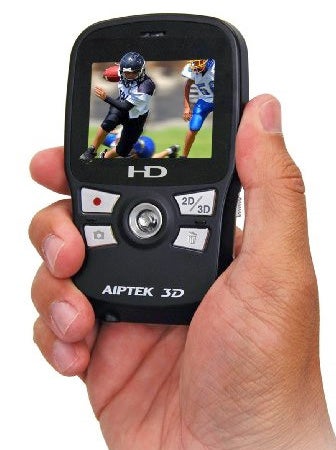 It’s a shame Aiptek didn’t give the i2 the ability to mix its 3D footage to a format that will display on a 2D TV. So unless you’re lucky (or rich) enough to own a 3D TV already, the other option will be your only one. This is to watch your footage with the help of a PC. The i2 has a built-in USB plug that slides out the bottom. This is a little snug with the device to fit many USB slots, but there’s an extension cable in the box to help out. Once the i2 is hooked up to a PC (and it has to be a Windows PC, as no Mac software is included), the necessary app will install automatically from the device itself, in true pocket Internet camcorder fashion.


The software included is ArcSoft TotalMedia HDCam, which is a little limited in features compared to the app supplied with Flip’s camcorders. Editing capabilities consist of trimming in and out points for a clip, then stringing a series of them together and outputting the results as a single file. Its main function is browsing and displaying your 3D footage, and uploading it to the Web. Aiptek provides a pair of red/cyan glasses in the box, which allow you to watch your footage onscreen in glorious 3D. The Arcsoft app will take the side-by-side footage and mix it to a red/cyan anaglyph in real time. However, TotalMedia HDCam also supports Nvidia’s stereoscopy system, so if you have this set up in your PC you can use it to watch your footage instead. 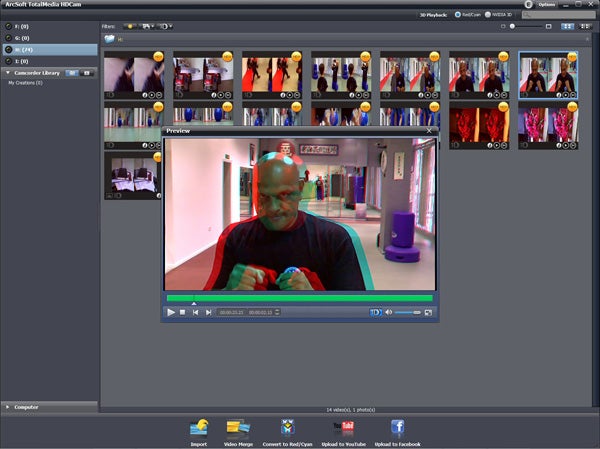 
The MP4 files the i2 creates can be imported and edited in other apps. So long as you keep the same video format and frame orientation, you should be able to apply filters and trim clips in your favourite video editing software. It’s also possible to convert clips permanently to red/cyan using TotalMedia HDCam.


You can upload files to YouTube and Facebook directly. When you upload to YouTube, there’s no need to convert to red/cyan format. YouTube supports side-by-side 3D video directly. So the file can be interpreted natively. When you see 3D footage on YouTube, an extra button beneath the video lets you choose the 3D presentation mode to fit the glasses you are using to watch it, or you can just watch one side of the frame. Take a look at our sample on YouTube. Facebook, on the other hand, doesn’t support side-by-side 3D so you will need to convert your footage prior to uploading. Other services may require you to do the 3D conversion locally, too.

When the first craze for 3D movies occurred in the 1950s, the limitations of anaglyph presentation using tinted glasses were partly responsible for its relatively quick demise. The Aiptek 3D i2 unfortunately suffers from the same problems, as the effects it creates are far from perfect. Since it’s unlikely the glasses provided will be perfectly calibrated to your display, you will see a little ghosting of the image meant for one eye within the image meant for the other. This makes the effect far less clean than the polarisation system used by RealD cinema presentations or IMAX’s shutter-based glasses. Some viewers don’t even perceive the 3D effect at all. But when it works, the 3D can be quite effective, with objects that are travelling towards the camera provoking a temporary desire to duck. 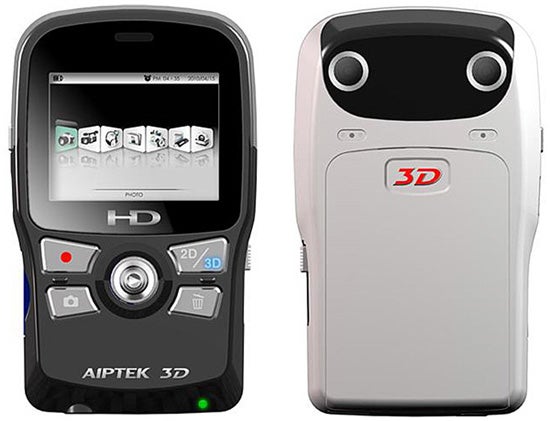 Performance in poor illumination is slightly surprising, too. The i2 actually picks up a brighter image in 3D mode than 2D mode. However, we found that our usual test for low light highlighted one of the issues for anaglyph-style 3D: the artificial flowers we use in this test are close in shade to the red filter, so they come out either monochromatic or blue when viewed in the i2’s 3D. Overall, however, low-light abilities are respectable for a camcorder at this price, and on par with other pocket Internet camcorders.


The Aiptek 3D i2 isn’t going to give you the ability to shoot the next Hollywood 3D blockbuster. In fact, it’s really a bit of a gimmick. But it’s also priced low enough not to matter too much. In fact, even though you have to factor in a few quid for your own SDHC memory, it’s not much more expensive than a regular HD pocket Internet camcorder. So if you were going to get a camcorder in this class, the i2 is well worth considering as a fun alternative that can give your footage an extra dimension.