Switching over to 3D, there’s more good news as it quickly becomes apparent that the Toshiba 50L7355D suffers considerably less with crosstalk ghosting noise than many of Toshiba’s previous active 3D TVs.

Despite this, though, the 50L7355D’s 3D pictures portray the same strange softness noticed with 2D, and in doing so don’t fully deliver on the full HD advantage that’s supposed to be active 3D’s raison d’etre. Some background areas actually look slightly out of focus, in fact.

As a result, we found we liked to switch in the ResolutionPlus processing system with 3D even though we tended to avoid it with other content types.

Another 3D issue is that for some reason (lack of processing power?) Toshiba’s Clear Scan motion processing system doesn’t work with 3D sources. Which is pretty darned unfortunate considering how juddery and stuttery motion in 3D images looks without it.

We’re no great fans of Toshiba’s latest 3D glasses design, either. Not only are the hinges between the lens frames and the ear arms very flimsy, the lenses are too small to cover your whole field of view, meaning that you’re distractingly aware of the fairly thick black frames Toshiba has fitted around the lenses.

The Toshiba 50L7355D’s audio is a mixed bag. Its max volume level is quite high, and there’s good vocal clarity. But trebles sound harsh during dense moments, and the set’s bass extension is nothing to write home about, especially as the soundstage tends to become rather muted when trying to deliver serious bass.

Finally, the inability of the soundstage to spread beyond the strict confines of the screen frame can also leave sound sitting a little awkwardly with 3D playback.

The last thing on our test list is input lag – a critical issue for serious gamers. And happily we can finish on a positive note, as when using its Game preset the Toshiba 50L7355D delivers an eminently respectable input lag measurement of just 33ms. 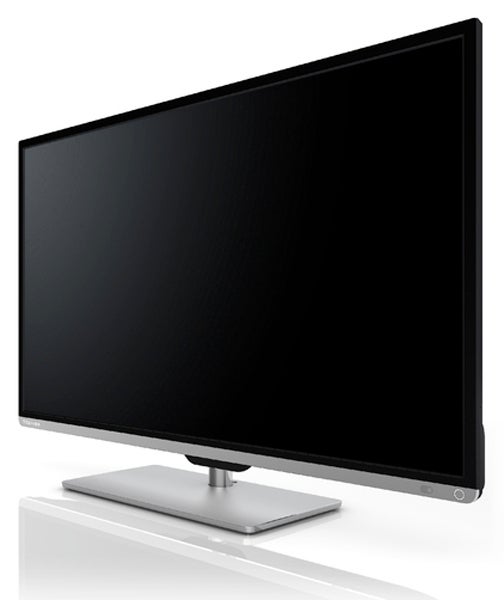 But extent of its appeal is rather limited. Film fans will feel frustrated by the way it can struggle with dark scenes, doesn’t deliver the amount of sharpness and detail with HD we usually see, and isn’t great at handling motion.

Strong alternatives to consider would be the plasma-based Samsung PS51F5500 at £699, and the LED-based Panasonic TX-L50E6B, which you can now get for under £850.

After delivering the budget goods with its Toshiba 40L6353, we had reasonably high hopes for Toshiba’s new mid-range model. But while it has its moments, the Toshiba 50L7355D ultimately feels a bit rough and ready in a few too many places for comfort.