Having recently been quietly impressed by the cheaper Toshiba 40L6353 model,
considering it a very respectable budget option, we were reasonably
hopeful about the performance of the 50L7355D. But unfortunately its
sheer averageness proves a bit of a let down.

For no particular reason we kicked off our tests with standard definition broadcasts – and the experience wasn’t very pretty. The set opts for a quite aggressive sharpening regime if you use Toshiba’s once-respected ResolutionPlus system. But while this processing engine makes standard def look much more detailed, it doesn’t bother with simultaneously trying to remove noise from the picture like the best upscaling engines do.

This can leave low quality standard def digital broadcasts looking alive with MPEG blocking and flickering, while mosquito noise around the edges of moving objects is also unusually pronounced. 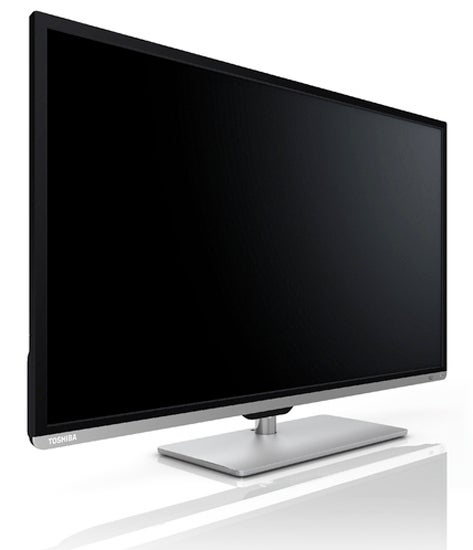 We’d hoped that turning ResolutionPlus off might calm things down a bit. But while doing this does make noise less aggressive, the picture looks softer and colours look less precise. So it’s a case of choosing your favourite poison, really. Or rather just avoiding standard def altogether if you can – which we guess is not too difficult considering the TV has a Freeview HD tuner and plenty of HDMIs.

Intriguingly, ResolutionPlus even works on HD content, and noticeably boosts HD images’ sharpness. However, in doing so it tends to make pictures look rather gritty, especially if your viewing distance isn’t far from the screen. So for us, ResolutionPlus should certainly be left off for HD viewing.

Having elected to turn ResolutionPlus off for HD, though, we were presented with another problem. Namely, that HD pictures looked softer than we’ve seen them on any TV for quite some time. Things aren’t so bad that you don’t feel like you’re still watching HD, but nor do you get the usual sense of texture, clarity and detail.

Some of this softness is down to the screen’s uninspiring motion response. Without calling into play the provided Clear Scan motion processing, moving objects are clearly compromised by resolution loss to the extent that they can actually look blurry at times. Camera pans suffer with noticeable judder without Clear Scan active, too.

Calling Clear Scan in on its lowest setting doesn’t make much difference, yet if you use its mid or high setting while the blurring disappears, you start to be distracted by quite a few unwanted processing artefacts – particularly haloing around large moving objects.

Even with motion processing on its highest setting, though, HD pictures still look curiously soft despite motion blur having been largely taken out of the equation.

Continuing in a negative vein, the Toshiba 50L7355D’s black level response is pretty average by the standards of this year’s VA (as opposed to IPS) LCD panels.

There’s a sheen of grey mist hanging over dark scenes no matter what backlight and brightness settings you opt for (short of removing almost all light from the image!), and the set struggles to present as much detail in dark areas as we would like, leaving the darkest parts looking rather hollow and forced.

The set does, at least, generally avoid heavy backlight clouding, except for some small shoots of light sneaking into the extreme corners of the image while watching 3D. And black levels are deeper than those witnessed on numerous TVs that use IPS passive 3D panels. But they’re still unconvincing overall.

Thankfully this situation is improved by using the Hollywood presets, though even with these the colour range looks a little murky during dark scenes. Exploiting the endless calibration tools the TV offers can improve colour handling further, but it seems strange that you have to work so hard to get the best colour results when there are so many presets on offer.

The 50L7355D’s colours – and, indeed, its pictures generally – are much
happier during bright HD footage like that commonly associated with
animated movies or daytime TV. With such fare the set suddenly springs
to life, looking vibrant and bold and perhaps for the first time in this
review, truly enjoyable. Contrast looks more convincing with bright HD
footage too, once the set’s black levels have some punchy colours to
bounce off.

Used as the main TV for the review period
Tested for more than a week
Tested using industry calibrated tools, discs and with real world use
Tested with broadcast content (HD/SD), video streams and demo discs
Previous
Toshiba 50L7355D Review Next
3D Performance and Conclusions Review