Blood & Wine isn’t a traditional Witcher adventure. Developer CD Projekt Red has shown off its wicked wit at times, but the marked tonal shift in this final expansion is distinct, successfully showing off the pompous, prancing silliness of a place that’s far removed from the war-ravaged lands to which Geralt has become so accustomed.

For example, in The Witcher 3’s world of war, politics and monsters, there’s also an economy consisting of crowns, orens and florens. The latter two currencies are useless – made obsolete after Nilfgaard’s invasion of the northern kingdoms – but can still be found on corpses, in chests and caves, as you might expect if an entire form of currency suddenly became worthless.

It’s an unobtrusive but smart world-building tool that hits home the idea of a nation under siege, but it can also be easily exploited; visit Novigrad’s central bank and at the press of a button you can turn this worthless coin into spendable crowns. It’s quick and simple.

Move to the duchy of Toussaint – Blood & Wine’s vast new region of unspoilt countryside famous for its legendary wines – and things aren’t nearly as simple as they could be. There’s no war here, no economy in turmoil, but when Geralt visits the capital city of Beauclair to retrieve some money left to him by an indebted associate, he finds himself chasing a paper trail. A battle of words, rather than swords.

Losing patience with nonchalant desk clerks incapable of simple tasks, tracking down elusive bank owners reticent to say where the money actually is, and searching high and low for official document do-and-so and important paper no.639; Geralt’s patience wanes as your amusement grows. In the base game, this could drag on or, on occasion, even bore. But in a world of poncey knights and warbling hilarity, it really works. 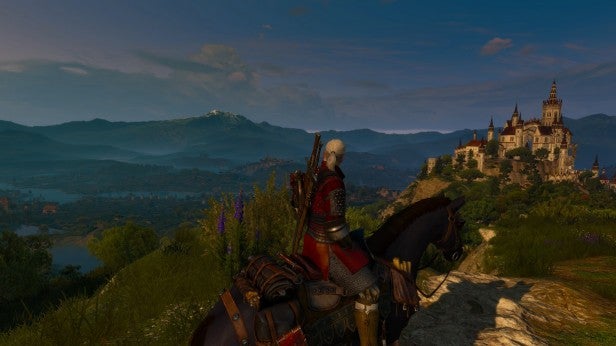 Toussaint is the most beautiful place that CD Projekt Red has ever created. With lush green rolling hills bathed in orange sunlight, the expanded draw distance not only shows off the touted graphical upgrade, but makes for wondrous sightseeing.

Explore the countryside and you’ll find sprawling vineyards, working mills, ancient ruins and riverside inns – a far sight from Velen’s muddy refugee camps, pyres, corpse-ridden battlefields and derelict towns. Beauclair, sat perched atop an Elven ruin, is visible from almost every point in the land; a centre of opulence that you’ll turn around to admire from a distance every now and then.

Toussaint’s looks are rivalled only by its sounds. I’ve always appreciated the different musical motifs that The Witcher 3 uses to depict each location – even the different islands of Skellige had unique themes. Blood & Wine is no different, mixing soaring vocal choruses with dulcet reeds and a wonderful sense of chatter that properly sells this place as hyperreal.

It’s not all fun, though. Despite its postcard weather and picturesque valleys, Geralt’s visit to Toussaint isn’t a holiday – he’s been summoned by the Duchess to help solve the mystery of “The Beast”, an unknown terror that’s already killed several high-ranking knights.

The investigation kicks off with three intense fights in quick succession – a marauding giant wielding a millstone, a heavily armoured rock monster that’s broken free of its restraints at a local tournament, and an especially vicious breed of vampire called a bruxae.

From here, the tale unravels, with vampires playing a major part in what is a surprisingly dark adventure. CD Projekt Red’s depiction of these impossibly powerful beings is interesting, making for both great storytelling and fascinating hunting opportunities.

In particular, Geralt’s main ally is one of the most intriguing of the game’s now-vast supporting cast, and if you’ve ever wanted to sit down with a vampire for an in-depth chat about life, death and everything in between, Blood & Wine lets you do that.

At its core, Blood & Wine offers more of what The Witcher 3 does so remarkably well – which is to place you at the centre of increasingly bizarre mini-dramas that come together to form a larger overarching threat. 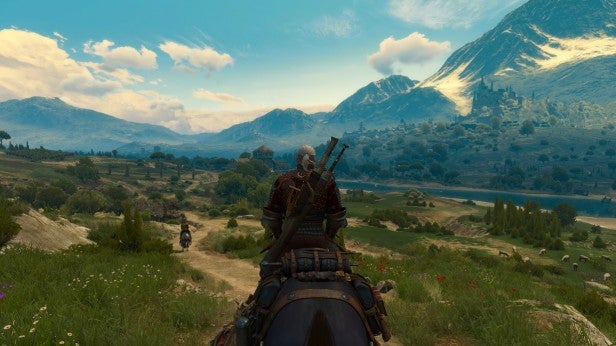 A cursed house filled with spoons is a particular highlight, striking a palpable creepiness that subsides into sympathy as you come face-to-face with the house’s gruesome inhabitant. There are some excellent fights in here too, both in and outside of the main quest, which rank among the game’s most challenging encounters. For the game to still be both exciting and surprising with its characters and its themes is quite a feat.

Related: Xbox One S – Everything we know

Even more impressive is that CD Projekt Red builds upon its strong foundations in several ways. On top of the varied main story, there are a handful of contracts and a few dozen fully fledged side quests. These have frequently been the highlight of Geralt’s adventures – mysterious threads that often lead to occurrences more sinister, more dangerous, and sometimes completely weird – and Blood & Wine is no different.

They range from finding a statue’s missing junk, to resolving a conflict between two opposing vineyards, to helping a foreman complete work on a monument of a goddess. There’s plenty to like here, and while it doesn’t rival the emotional beats of the main game’s exemplary Bloody Baron quest line, it’s all memorable.

There are also refinements to alchemy and crafting, new armour sets and weapons. You get the deeds to your own vineyard, which you can pile an extortionate amount of coin into for various improvements from which Geralt and Roach can benefit. There’s even a bed, so finally Geralt can have a proper rest rather than sitting around in the woods meditating for hours on end. 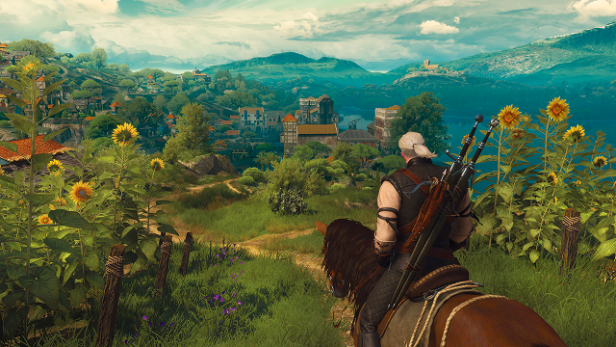 Cleverly, CD Projekt Red also addresses the expansion’s high level requirement. Rather than force you to pile ability points into skills you’ll never use, Blood & Wine introduces mutagens. Unlocked via a side quest that, weirdly, you can miss entirely, these allow you to bolster Geralt with some powerful abilities.

This is the most substantial shake-up to the game’s sword and magic mechanics yet. My favourite is an upgrade to your Aard sign that turns it into an overpowered freeze ray, which also has a small chance of exploding enemies when it hits them.

There are, of course, features that Blood & Wine doesn’t change. Geralt’s Witcher senses remain a crux for solving any and all problems, and the game’s combat scenarios often seems a little imbalanced; a couple of quests had me banging my head against a wall, despite being overlevelled and turning the difficulty down.

Overall, however, these are small foibles in a package that exceeds 30 hours and regularly delivers some of the best moments CD Projekt Red has given us yet.

Blood & Wine is an experience that is truly bittersweet. This is the hallmark of a studio at its peak, wholly confident and with nothing left to prove, but also still committed to delivering an expansion that’s more generous with its content than some full games – and which is good enough to be a Game of the Year contender in its own right.

I’m sad to say goodbye to Geralt, especially since we’ve just got an entirely new flavour of a world that shows no signs of becoming stale. As PT Barnum famously said: “always leave them wanting more”. CD Projekt does just that.