Introduction
Tekken’s glory days seem long behind it. While Capcom’s fighting games have triumphed in this console generation, with Streetfighter IV and Marvel vs Capcom 3 winning favour with fans, Tekken’s only recent outings have been the underwhelming Tekken 6, the Capcom made Streetfighter X Tekken and an okay but dated HD port of Tekken 5. Even the PS2 years weren’t that brilliant, with the decent Tekken 5 making up for a disappointing Tekken 4 and a slightly lacklustre Tekken Tag Tournament. For those of us with fond memories of post-pub Tekken 3 matches going on into the early hours, or evenings spent with Marshall Law and Nina Williams in Tekken 2, this situation has been all the more depressing. It’s not so much that Tekken went bad, but more that the world has moved on. 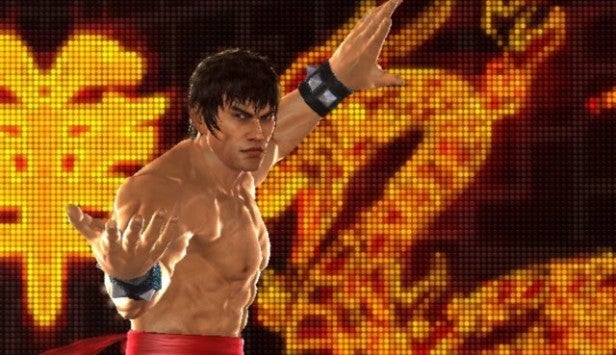 Well, with Tekken Tag Tournament 2 the good old days are back again. While it’s not as magnificent a comeback as Streetfighter IV, it’s an excellent reminder of everything that made Tekken so fantastic in the first place. It’s also an incredibly generous package, with a whopping 50-strong roster of fighters, more stages than we’ve been able to count, an extensive range of different online and offline modes and all the collectibles and customisation features you’d expect from a modern fighting game. It’s so polished and so packed with features that our biggest bone of contention – the lack of a coherent single-player story mode – pales into insignificance.

Tekken Tag Tournament 2 Modes
The various modes are split into two main offline and online menus. Online, you get a choice of ranked matches and player matches, filtering options by player level and connection status. Offline, lone players get their basic Arcade mode, a Ghost mode where you can level up playing against a selection of simulated players, a practice mode and a Fight Lab mode, which we’ll come to later. With two or more players you can enjoy the standard two-player versus mode plus a two-on-two Pair Play mode and a tournament-style 16-player Team Battle mode. 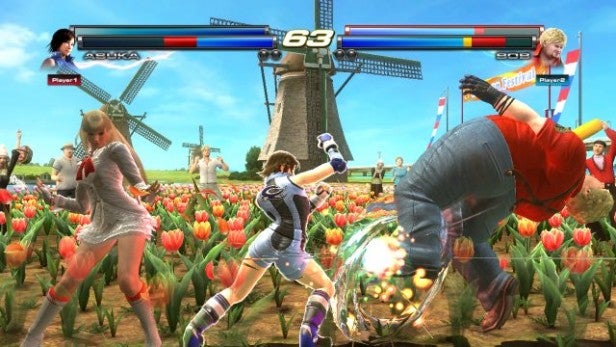 However you play, the action is classic Tekken. Two face buttons unleash fist-based attacks, another two unleash kicks, and a combination can be used to grab and throw your opponent. Using the D-Pad or analogue stick you can target blows to high, middle or low areas, block mid and low attacks, duck or jump.

Beyond this, each character has a lengthy list of combos, which can be strung together into arguably the most brutal attack chains of any fighting game. Tekken is kinder to button mashers than, say, Virtual Fighter 5, but only to a point. Against tougher opponents – particularly human ones – there’s a level of skill involved in simply staying standing long enough to rain your own blows down.

What Tekken Tag Tournament brought to the party, and what this sequel revamps, is a tag team system, where you can pick two characters before each match and switch between them at almost any time. Different combinations can be used to provide balance or guard against a particular threat, as well as giving you a reprieve when you’re about to be KO’ed. Unlike Marvel vs Capcom, one KO is enough to put you one round down in a best-of-three or best-of-five, so you can’t use characters as lives. Part of the strategy of the game is knowing when to switch and when to hold off for a few precious seconds longer. 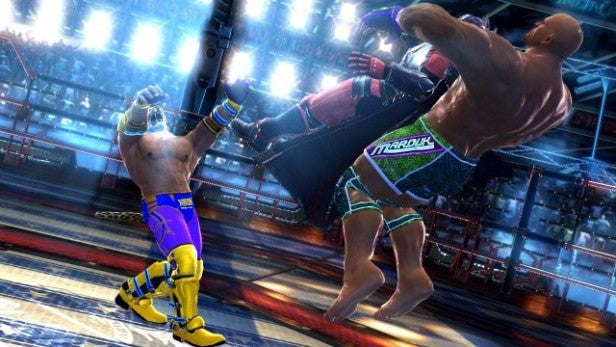 The game also introduces a handful of switching moves, where you can tag mid-attack and bring in your second character to finish the job. This doesn’t have the depth of Marvel vs Capcom’s team attacks, where different combinations of characters created completely different attacks, but it adds to the flexibility and spectacle of the fighting.

Tekken Tag Tournament 2 Gameplay
While Tekken Tag Tournament 2 seems like a slightly conservative pseudo 3D fighter, it’s more willing to play with the formula than any Tekken since the over-reaching Tekken 4. Fights can now take place through arenas with multiple levels, with players crashing through a barrier or falling through the floor to arrive in a different section. Other levels see you fighting through snow or water, in the style of Virtua Fighter 4 and 5, while dirt, mud and water now visibly affect character clothing. Finally, sidestep moves ensure that while you’re fighting on a 2D plane, there is room for a little lateral movement. 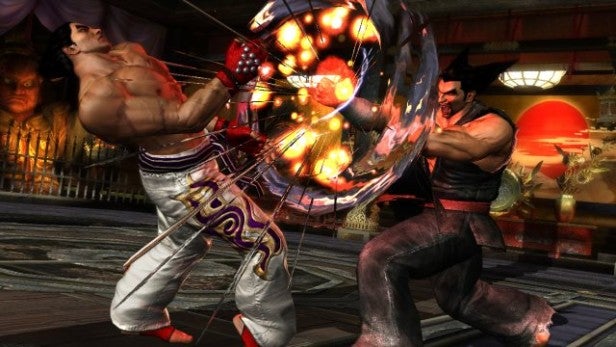 The more you play Tekken Tag Tournament 2, the more you respect its achievements. Like every great Tekken you can pick it up and play it, and against CPU opponents or a less skilful human adversary you’ll have a half-decent chance of winning through. Yet there are layers of depth to the system. Master the careful timing of blocks, counters (or punishers in Tekken parlance), juggling combos and ground-pounding blows, and you can fend off incoming attacks with impunity, before grinding your foe down in a flurry of blows.

Sadly, this is unlikely to happen when you first venture online. We’d always argue that any fighting game is best played with people you know while sitting in the same living room. However, that’s not always possible, and there are some players who want to work their way through the ranks and match themselves against the best in the world.

Here, Tekken Tag Tournament 2 is no letdown. At the time of writing there are few European players to fight and we’ve had to open the connection speed filters to get any action going, but even with sub-optimal connections we’ve enjoyed smooth matches with barely any lag, and just a longer delay while the game goes through its initial sync. There’s also no tedious sitting in a lobby, either. Pick your characters and the game throws you into a virtual dojo, where you can practice your moves while waiting for another player to pick up your challenge. 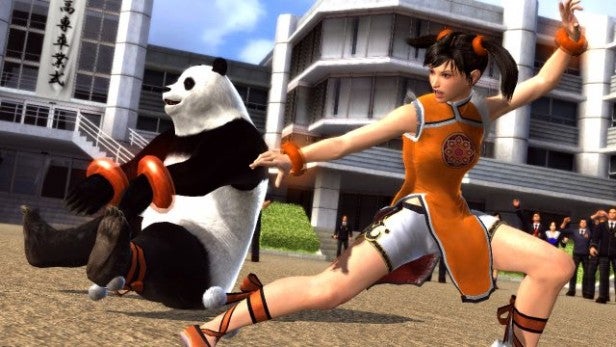 While by default TTT2 is set to pitch you against adversaries of your own level or a couple of levels lower or higher, we still found ourselves mercilessly battered in many matches within seconds – a forcible reminder that no fighting game encourages the steamroller approach like Tekken. The trick is to either strike faster and harder or learn how to block, and really get to grips with how the different blows and timings work.

Tekken Tag Tournament 2 Fight Lab
Luckily, Tekken Tag Tournament 2 is here to help. Most fighting games now have a practice mode, and some have tutorial or challenge missions. TTT2, however, goes one better with its single-player Fight Lab mode. Following the efforts of series stalwart Lee Chaolan – in his alternate Violet persona – it has you playing an experimental Combot, training him through a series of scenarios so that he can duke it out in the tough Tekken universe. Each chapter covers a basic skill set, from the simplest attacks and combos, through blocks and counters to some of the more complex systems in the game. 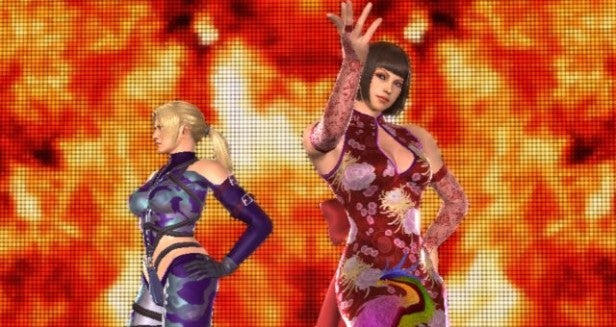 The amazing thing about Fight Lab is that where most tutorial modes are a bore, Fight Lab is challenging and fun. After some initial bewilderment you learn to love the weird hand-drawn cut-scenes and oddball humour, and you come away from a Fight Lab session feeling more knowledgeable and capable than before.

Tekken Tag Tournament 2 Characters
Tekken’s character roster is, as with Streetfighter’s, amongst the best and most iconic in the business. Few fighting games can muster characters as memorable as Law, Paul Phoenix, Jack, Yoshimitsu and Kazuya, or weirdos quite as weird as King, Mokujin, Dragunov and Panda. Tekken Tag Tournament 2 doesn’t introduce new members to the cast, but it does cherry-pick the finest stars from Tekkens past, including Bob, Lars, Miguel, Alisa and Zafina. Of course, you can argue that many are variations on the same theme, particularly when you have Kazuya and Devil Kazuya, Law and Forest Law and King and Armour King, but go deeper and there are always different moves or subtly different play styles. Many fighters struggle to differentiate and balance eight or twelve characters. The fact that TTT2 does such a good job with 50 is close to a miracle.

Tekken Tag Tournament 2 Graphics
Graphically, Tekken has at last caught up with Soul Calibur IV and Soul Calibur V. Characters are the most realistic they’ve ever been – or at least as realistic as boxing kangaroos, giant kung-fu lizards and batwing-sporting demi-demons get – the effects are stunning and lavish, and the arenas are packed with wondrous details. You’ll find fights taking place on rooftop terraces, in front of a cocktail-sipping crowd, in flamenco bars with dancers twirling in the background, and even in something that looks an awful lot like Rome’s Trevi fountain. Sometimes you wish everyone would just stop scrapping so that you could pause and admire the view. 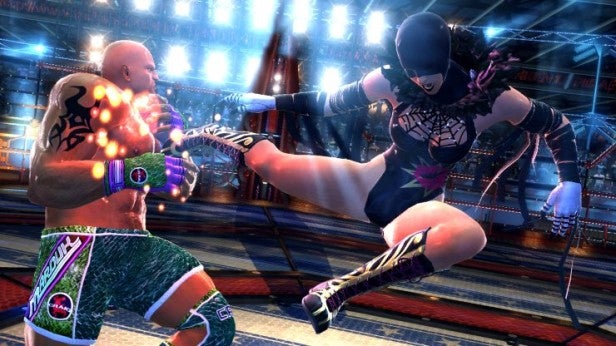 Tekken Tag Tournament 2 is not beyond reproach. If you’ve had your fill of fighting games and you’re looking for a genre-busting title, this is not the game for you. The same applies if you want a rich single-player experience. Yet Namco’s latest has the feel of a Tekken’s greatest hits, with all the fist-smacking, knee-cracking music you know and love, plus a few back-breaking songs you might not have remembered. It might not put Tekken back on top of the beat’em up pile, but for the first time in years it feels like a real contender.

Tekken Tag Tournament 2 Verdict
The strongest Tekken since Tekken 3, and an incredibly generous package of characters, stages and game modes. There’s a steep difficulty curve for newcomers, with a definite focus on online and offline versus play, but the excellent Fight Lab mode gives players a chance to build and refine their skills, while the reworked tag-team mechanics add a twist to the established Tekken formula. It doesn’t topple Streetfighter IV as the king of fighting games, but Tekken Tag Tournament 2 puts Namco’s old fighter firmly back on the map.