One of the few highlights of Nintendo’s underwhelming launch line-up for the 3DS was Capcom’s 3D conversion of Streetfighter IV. Despite the lower resolution of the 3DS screen, Capcom did a stirling job of bringing the action and spectacle of one of this generation’s finest fighters to a handheld format, even if the almost total lack of background animation and a few fudged visual effects gave the game away. Now, however, Ultimate Marvel vs Capcom 3 puts even this achievement into context. With the added power of PlayStation Vita at its disposal, Capcom hasn’t simply created a solid imitation of the Xbox 360/PS3 game, but a conversion that – unless you look really closely – is pretty much identical to the real thing. 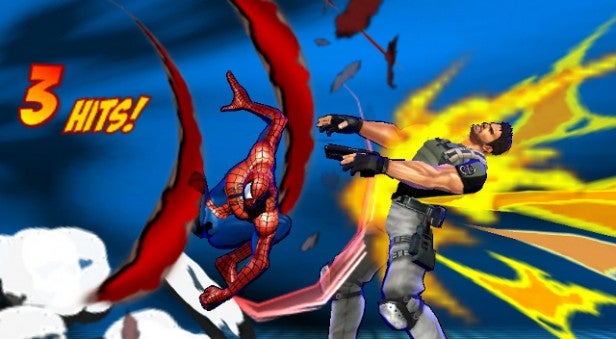 What makes this all the more impressive is the fact that this isn’t just another fighting game. With Marvel vs Capcom 3 and later the Ultimate version, Capcom made what is arguably the most visually stunning beat-em-up of this generation. Combining characters from the Streetfighter, Darkstalkers, Okami, Bionic Commando, Ace Attorney and Megaman games  with heroes and villains from the Marvel universe, Capcom obviously felt freed-up to unleash all kinds of mayhem on the screen. With its dragon-punches, stretchy limbs, electric shocks and yogic flames, Streetfighter was never what you might call realistic, but throw Magneto, The Hulk, Doctor Doom and Spider-Man into the mix and you can take it up to a whole other level. 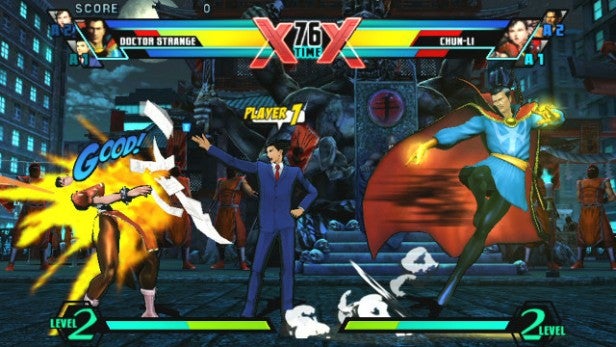 There’s hardly a second that goes by where someone isn’t getting whacked high into the air, toasted with a screen-filling death ray or walloped with some high-explosive projectile, and the result is a dizzying extravaganza of comic-book violence. You might notice the lack of animated detail in the gorgeous backgrounds – with Thor’s Asgard a particular highlight – but only if you fancy getting crushed by the flaming bolts or hulking fists headed your way. 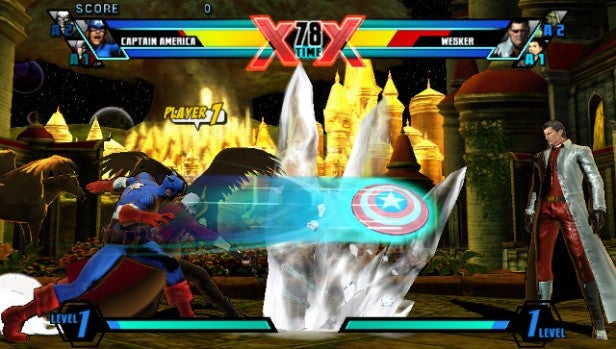 And that’s not all. Marvel vs Capcom 3 went one better by integrating tag-team mechanics into the game. Instead of choosing one fighter before a bout you choose three, and not only can you tag between them, but also call in a hero temporarily to double-team on your current opponent, or combine two or all hero’s powers in one awesome mega-attack. This adds to the audio/visual overload, but also lends Ultimate Marvel vs Capcom 3 a different feel from other fighters. It’s not just about stringing together blows, blocks and combos, but about judging when to throw fighters in and out of combat, and when to trigger those high-powered special moves.

As with all fighting games, success still relies on great timing, but
also on an encylopaediac knowledge of the escoteric D-pad/stick and
button combinations required to pull off your most vicious attacks.
This, and the complexities of the tag-team system, can make the game
offputting to beginners. Ultimate Marvel vs Capcom 3 on Vita tries its
best to get around this with a simplified control system and even an
optional touchscreen mode, where simply tapping on the screen is enough
to draw out an unstoppable barrage of attacks. In the end, though,
there’s no replacement for practice and for just getting stuck in. 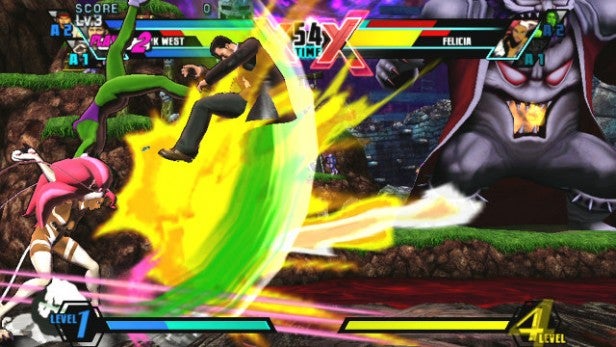 It’s worth the effort. While some regard Marvel vs Capcom 3 and its Ultimate offspring as a dumbed-down, hyped-up alternative to Streetfighter IV, it just works on so many levels. The character roster, for a start, is practically unmatched, not just because so many of the stars are so familiar – even non-gamers know Spider-Man, The Hulk, Captain America, Doctor Doom, Magneto, Wolverine et al – but because the sheer variety and quantity of the fighters gives the game so much long-term appeal. You can spend hours just experimenting with different line-ups, and come across line-ups that demand you rethink your strategy. The fighting is fast and fluid, and the fully-charged attacks and team attacks provide satisfying high-points and the odd last-minute upset. It’s a great fighting game to play. 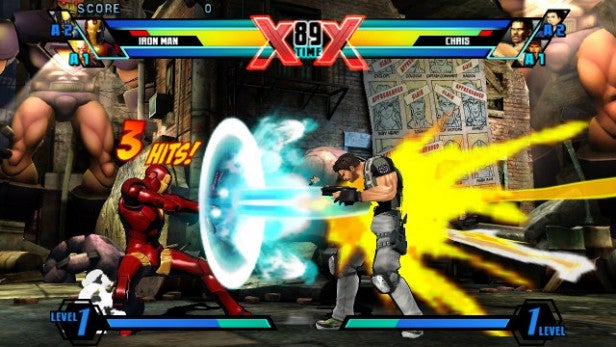 This makes it slightly disappointing that the single-player modes aren’t all that inspiring. On top of the traditional arcade mode we get a simple training mode, plus a challenge mode where you’re tasked with wiping out a series of opponents using specific moves. The first doesn’t really tie the fights into a story, while the last two are really only good for helping you get to grips with the game. There’s some recompense in a bit of day-one DLC,  with a Heroes and Heralds mode where you fight to conquer specific zones on behalf of the heralds of the world-eating Galactus or the heroes and villains that oppose him. By winning fights you also win cards, which can be added to a deck to confer certain in-fight bonuses. This adds a little meat to the game. 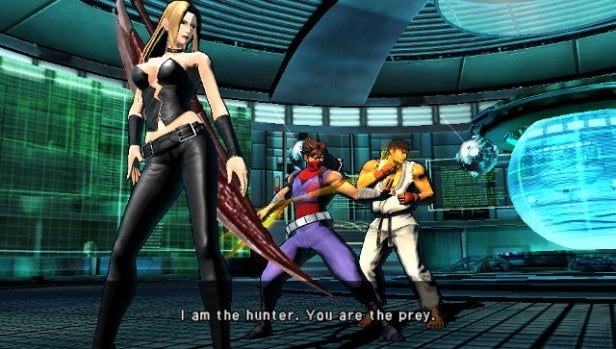 Of course, any fighting game is best enjoyed with other players, and while Ultimate Marvel vs Capcom 3 can’t match the pleasures of beating someone you know on the same screen while sitting in the same room, it makes up for it with a solid online mode. Before launch it’s impossible to give a final verdict on this, but with eight-player lobbies and ranked matches all in place, there’s no shortage of potential. Heroes and Heralds is also available as an online game, with the idea being to give a more interesting long-term structure to the action.

Verdict
Ultimate Marvel vs Capcom 3 brings all the action and bombast of an excellent beat-em-up to the small screen, and is another sure sign that PlayStation Vita can imitate recent console hits without breaking a sweat. It’s tough on newbies and the lack of single-player modes hurts, but if you want to see Marvel’s biggest names square off against some of gaming’s, then this is the finest game in town.