You might call this review “the triumph of conservatism.”


Don’t worry – I’m not talking about David Cameron and his next-generation Tories, but about Sega and its next-generation fighting game. Barring the staggering PS3-powered visuals (more on them later), Virtua Fighter 5 might not appear to be a huge move on from Virtua Fighter 4: Evolution, or indeed, Virtua Fighter 4 itself. As Virtua Fighter 4 was in itself something of a step back from Virtua Fighter 3, whose more expansive, undulating stages and dodging mechanics now look like a failed experiment, this means that we’re effectively looking at a series that has stayed pretty much true to the template laid out in its first iteration, nearly fourteen years ago. After Dead or Alive 4 and its sprawling, multi-level arenas or Tekken 5 with its frankly ludicrous cast of characters, it’s almost disappointing that such a flagship title for the beat ‘em up genre does so little to move that genre on. 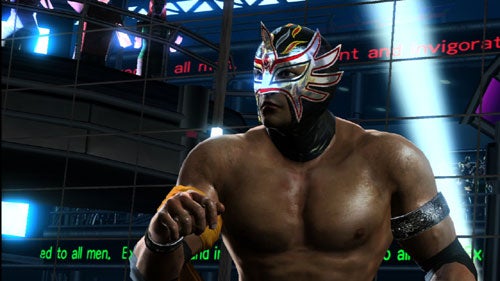 
Feel free to disagree. Some will doubtless prefer Tekken 5, with its more accessible, more aggressive game style and richer list of game modes and bonus features. Many Tekken fans find Virtua Fighter dry and overly technical, and there’s no question that their favourite has the more spectacular cast and special moves. As a beat ‘em up for pre or post-pub antics, it’s still impossible to better. Dead or Alive 4 has its followers, too, partly because its play style hits a nice balance between VF and Tekken, partly because of its infamous scantily-clad femmes fatale, and partly because it’s hard to resist a game where you can kick your opponent through a window or down the stairs. If you’re a dyed-in-the-wool member of either contingent, then it’s unlikely that VF5 will change your mind any more than VF4 did. 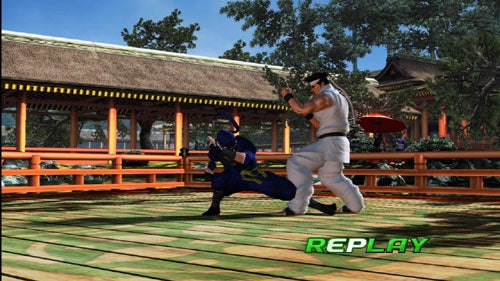 If you have an open mind, however, and you’re willing to learn the ropes, VF5 is the beat ‘em up to play. One of the reasons is, oddly enough, limited choice. VF has always been conservative when it comes to adding new fighters, each new version adding only two. The advantage of keeping your character roster relatively small is that you can a) work on giving each fighter a distinctive, individual style and b) work on maintaining a fine balance between the fighters. As with any decent fighting game you have your high-speed types, your heavy-duty grapplers, your medium-speed, medium damage brawlers and your high-impact bruisers, but Sega has carefully ensured that each combatant has his or her own particular strengths and weaknesses, and – more impressively – made sure that any one character has at least a fighting chance against any other. This instalment’s newcomers certainly don’t spoil the mix. Eileen is a small, speedy, low-damage fighter who relies on flurries of attacks for effect, while El Blaze is a hilarious, bigger-than-life Mexican-style wrestler who acts as a bridge between the bigger wrestling characters – Wolf and Jeffrey – and the middleweight brawlers. As such, he’s a whole lot of fun.

The mechanics put the emphasis on timing and reaction, and while it is possible to put together crushing combo moves, there’s always a defence and even a counter-attack if you think and move quickly. The great weakness – and the great joy – of Tekken 5 was its unpredictability: your local master might just be taken by a novice if that novice can mash the right buttons at approximately the right time and hit a lucky streak. In VF5, it’s all about skill. Without a modicum of timing and a basic understanding of how to chain moves together, you won’t even get through Arcade mode at the easiest difficulty level. At higher levels, or against a good human player, you’ll either need to be a spectacular improviser, or to master some of the most difficult button sequences known to man. 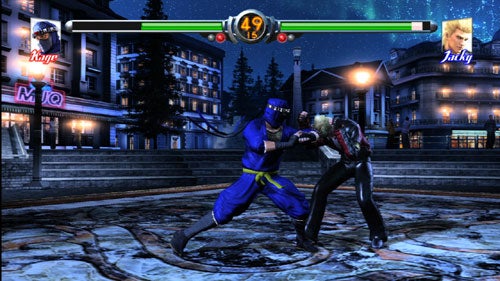 This might sound off-putting, but it needn’t be. The upside of being challenging is that VF5 is also hugely addictive – even in its single player modes. Where its rivals have bolstered their basic arcade modes with branching story-based quest structures, scrolling action sub-games and even bowling mini-games, VF5 gives you single-player arcade mode, two-player versus mode, a stripped-back ‘quest’ mode, and that’s it. The reason is simple: where other fighters feel they need to broaden out from their arcade roots in order to offer a long-term single player experience, VF5 concentrates on providing the most arcade-like experience possible, in the hope that this will be enough. The surprising thing is that it is enough!


Quest mode actually plays into this. You take a profile – one character, one ‘ring name’ – and take them on a trip through a selection of arcades. Each has its own mix of players to battle it out against, and by beating tougher players in ranked matches you can work your way up the pecking order, going from 10th Kyu down to 1st Kyu, then from 1st Dan up to 10th Dan and beyond. Along the way you’re invited to tournaments, and you also get the chance to win bonus items with which to augment your character: a nice pair of shoes from one victory, a nice pair of specs from another. Win enough cash, and you can even buy new tops or costumes. 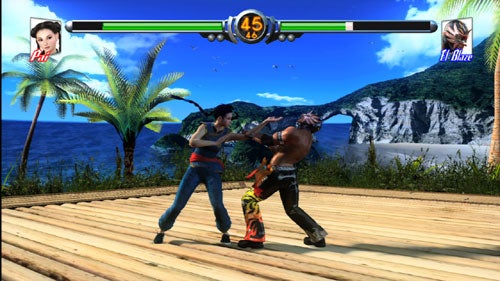 In most games, this would be a dry, unrewarding affair, but somehow Sega has imbued it with character. For one thing, your CPU-controlled opponents really seem to offer a range of play styles and difficulty levels, making it as close as you get to playing against an oddball selection of real players rather than a standard, progressively harder AI. For another, they all have names and catchphrases provided by real players, helping you to picture some spotty oik who needs a lesson in manners. Now who’s being ‘pwnished’, sunshine? 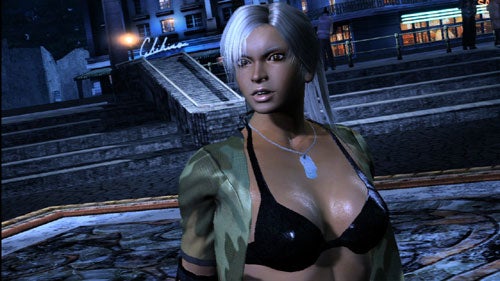 In fact, the one real disappointment is the lack of an online mode. Maybe Sega looked at it and decided the connection speeds and infrastructure still weren’t up to it, but there’s a sense that opening up Quest’s virtual arcade premise up to millions of players would have been a brilliant move. As it is, you’re limited to old-fashioned multiplayer action. Arguably, fighting games are best played face to face – where you can see your opponent crumble as you batter his fighter into submission – than across a network, anyway. Provided you’re not the one being destroyed time and time again by some smug git, that is…

And now for VF5’s crowning glory – the visuals. If Dead or Alive 4 had the black-belt in fighting-game graphics, VF5 rips it off, tears it into pieces, and shoves the bits back down its throat. Close-up, the characters are astonishingly detailed, and if the skin is a little rubbery looking, you have to admire the textures and imperfections. During combat, you can’t help but admire the superb cloth and material effects – including, fetish fans, the best implementation of leather ever seen in a video-game – not to mention the intricate patterns and ornamentation. What really raises the benchmark, however, are the arenas themselves. It’s hard to know which I like best: the rain soaked, urban scene with its reflective puddles? The desert ruin, where you fight in a pool of water that ripples and splashes around your fighter’s feet? The mist-shrouded temples on the Great Wall of China? The shrine with its servants sweeping in the background? If you’re watching, rather than playing, you could spend hours just trying to catch all the little details that Sega has thrown in to make this the most spectacular fighting game since Soul Calibur first appeared on Dreamcast. 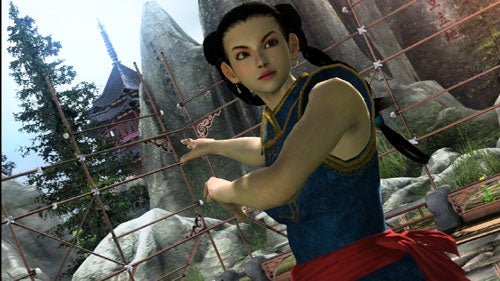 Even a glance will tell you that we’re leagues ahead of some of DoA4’s poorly integrated environments with their missing shadows or roaming critters (though that game’s jungle temple and Japanese gardens might stand more comparison). For now, we’ll say it’s a glowing testament to the PS2’s power, but we’ll be very interested to see what the Xbox 360 version looks like when we see it in a few months’ time. 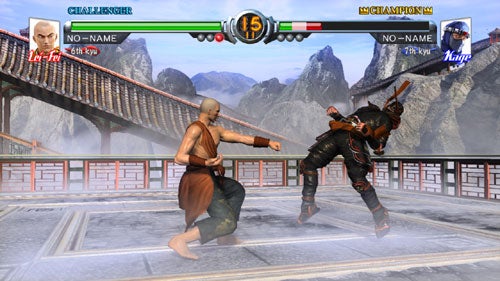 Basically, it’s hard to think of an area where VF5 slips up. The music is dodgy, I’ll admit, but the sound effects are as excellent as they were in Virtua Fighter 4, so the only major gripes are the lack of online play and the feeling that it wouldn’t have hurt Sega to be slightly more adventurous. By being conservative, it has created one of the strongest, tightest, most perfectly wrought fighting games ever, but this isn’t a game that redefines a genre in the way that Resident Evil 4 did the horror game or Half Life 2 did the FPS. I can’t see the fans complaining, but there’s still plenty of scope for Sega to surprise us next time around.


A sublime fighting game, albeit one that doesn’t move too far from Virtua Fighter’s roots. Still, the beautiful visuals and superbly balanced game mechanics make this the new beat ‘em up to beat.