There is more good news when it comes to the setup as the DS414j offers the same silky setup experience we have become accustomed to from all Synology NAS.
Going back to a screwdriver isn’t the greatest hardship in the world (each drive requires six screws to fit securely into the drive bay) and you will still be up and running in less than 10 minutes. Moreover once booted and connected to your router you simply go to find.synology.com in your browser and it locates the NAS and begins the setup wizard. 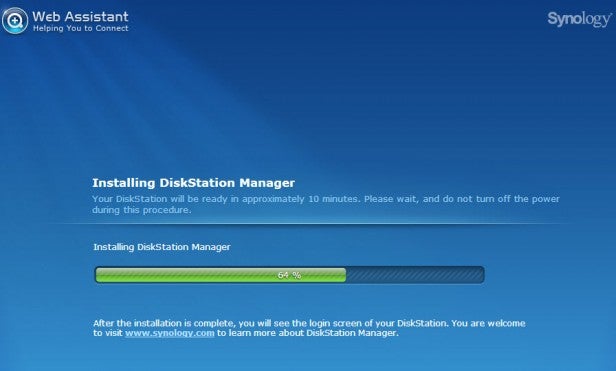 If Synology has any problems automatically detecting the NAS then you will be prompted to download the Synology Assistant software, but we have yet to have a Synology NAS require this.
As for the wizard itself, it is comprehensive. You create your username and password, choose the RAID type and even with four drives the formatting process to SHR takes no more than 15 minutes. Meanwhile entering DSM 5.0 for the first time gives you a walk around the platform, and its natural language search and help sections are comprehensive.
For both experienced and first time NAS owners DSM remains streets ahead of the competition. 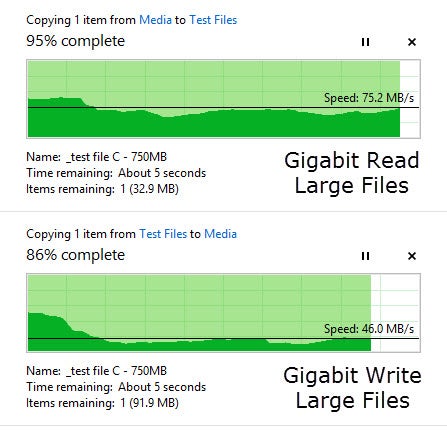 Unfortunately the competition does get a lot closer when it comes to performance and we suspect Synology’s decision to fit just 512MB RAM is what comes back to bite it.
Reading large files the DS414j hit speeds of 75.2MBps (601.6Mbps) while write speeds achieved 46MBps (368Mbps) and both did fluctuate. This is largely similar to its main budget rival, the Western Digital EX4, but we have seen faster speeds from more premium two-bay NAS like the Synology DS214play and WD EX2 (particularly in writes) so it is worth considering if you really need four bays. 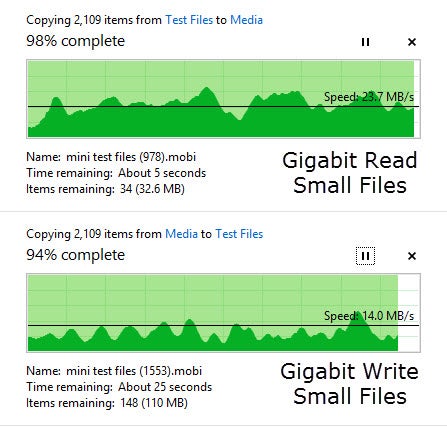 This argument also remains true when it came to transferring small files and a CPU stressing 2GB folder of over 2,000 files saw the DS414j manage read and write speeds of 23.7MBps (189.6Mbps) and 14MBps (112Mbps) respectively. Here read speeds are slightly up verses the budget competition while writes are average at best.
When it comes to noise, the DS414j carries on Synology’s tradition of being whisper quiet. Noise will obviously depend on the drives you fit, but with our test drives (WD Reds) it almost always produced 25-30db at one metre (bordering on whisper quiet) and dropped to under 20db when in low power mode. This makes it an ideal NAS for the living room. 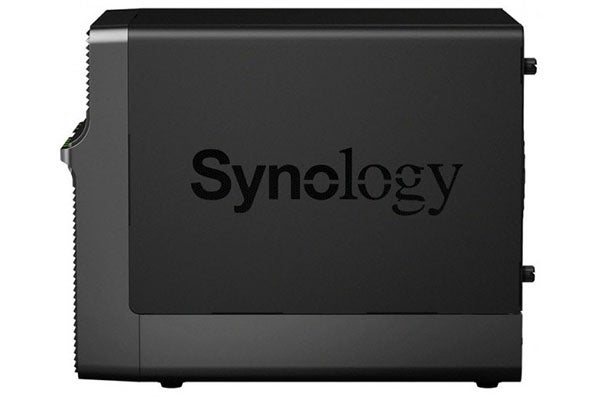 Should I buy the Synology DiskStation DS414j?

If you are looking for breakneck performance, then the answer is no. That said, if you are looking for breakneck performance you shouldn’t be looking at budget NAS. Furthermore with a £275 sticker price verses £319 for its closest rival – the Western Digital EX4 – the DS414j is very cheap for an unpopulated four bay NAS.
Furthermore, while it won’t break any speed records, in use the DS414j has the same slick setup and classy software as the company’s premium models so you sacrifice speed but get the same smart, user-friendly experience.
On the flip side, though well priced, we do think it is worth spending a little more. Our favourite mid-range four-bay NAS of choice is the Synology DS414 which obliterates the performance of the DS414j yet unpopulated costs £350, just £75 more. As such we would argue Synology’s biggest rival is itself, but for those who really can’t squeeze any more cash from their piggy banks the DS414j is the best budget four-bay NAS to date.

It may be no speed king, but the DS414j is one of the cheapest four bay NAS around. It’s also quiet and sports Synology’s class leading DSM software making setup a doddle. As such the DS414j is the best four bay budget NAS we’ve tested, but we would highly recommend spending a little more to get the much faster DS414.