What is the Synology DiskStation DS414?

Synology’s consumer and SMB focused NAS is the successor to the popular four bay DS413 and features significant hardware upgrades and an aggressive price tag. The talking point is the wholly new chipset with the company switching from Freescale or Marvell and Synology claims this will mean a breakthrough in performance. 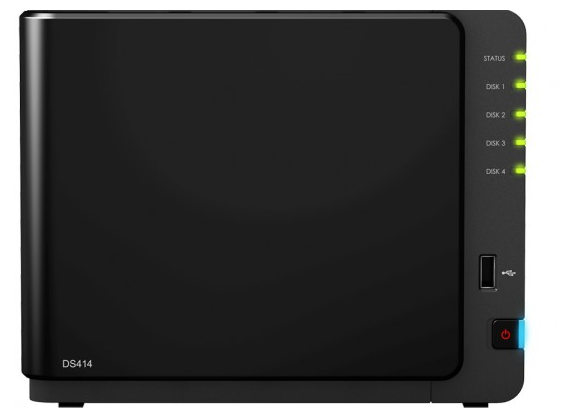 On the outside little has changed from its predecessor, but this isn’t a problem as Synology’s refined NAS designs are some of the best in the industry. As such the DS414 is both minimalist and modern and at just 233 x 203 x 165mm and 2.02Kg (unpopulated) it is compact.

We’re also a fan of the matt finish Synology uses on most sides, which resists dust and fingerprints – the former being pertinent for NAS drives as they tend to be setup and left for long periods. The removable gloss facia opts out, but does provide simple access to the drives without the need for hinges that may warp or break in future.

The front also sports Synology’s quick copy USB port for adding content from external hard drives. The downside is it uses USB 2.0 when both ports on the rear have been upgraded to USB 3.0.

The DS414 also fits two large 92mm fans on the rear, but only one is used at a time to keep noise down and to provide a backup should one fail. Yes there’s fan redundancy! Just below the fan is a pair of Gigabit Ethernet ports which we’ll get to later. An omission is the lack of eSATA support carried over from the DS413. This isn’t vital given the rise of USB 3.0, but it is a shame for users with legacy equipment. 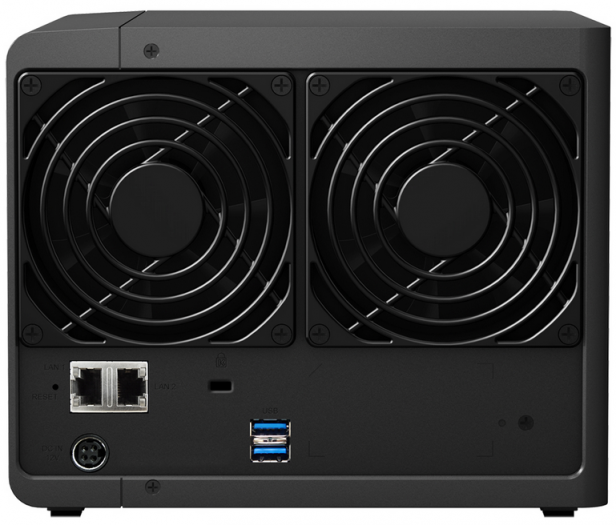 Lastly we come to perhaps the best bit of the DS414: tool-less drive bays. The bays are highly flexible, which can make them feel flimsy, but this is simply to let them to bend around both 3.5in and 2.5in drives and they would be tough to break. The system allows drives to be swapped within a minute sees Synology catch up with Drobo and Netgear who have offered this for some time.

One grumble we do have is Synology’s resistance in fitting a display to provide at-a-glance drive information. Consequently this data must be accessed via software, but it does keep the price down.

So with such a promising external hardware what lies inside? The headlines go to the switch of chipset with Synology dumping the Freescale 1.067GHz dual core CPU in the DS413 for a Marvell Armada XP (MV78230) 1.33GHz floating point CPU. This is backed up by 1GB DDR3 RAM and support for up to 16TB (4x 4TB HDDs) of storage. A full list of supported drives can be found here.

RAID support is comprehensive with Basic, JBOD, RAID 0, RAID 5, RAID 6 and RAID 10 along with ‘Synology Hybrid RAID’ (SHR). SNR supports both volume expansion by both adding a hard drive and by adding a larger hard drive. Just RAID 5 otherwise supports both while SNR also optimizes volume size using only what it needs for data redundancy rather than simply mirroring the drives. It is Synology’s answer to Netgear’s proprietary industry changing X-RAID.

The issue with the latter is each has its own app (DS video, DS file, DS audio, DS photo, DS finder) and we do wish Synology would make a single comprehensive app rather than forcing us to install them all.

One final grumble is Synology’s continued reluctance to integrate Wi-Fi. It isn’t alone and the DS414 does support an array of third-party dongles (full list here), but with 802.11ac starting to proliferate and capable of giving Gigabit Ethernet a run for its money we’d like to see this built into more NAS by default. Especially since dongles’ limited space for antennas mean they never do justice to Wi-Fi standards.