What is the WD My Cloud EX2?

The EX2 is a dual drive version
of Western Digital’s popular single drive My Cloud hybrid NAS and Cloud
storage device. It joins the company’s four-drive My Cloud EX4 but,
while we found speed and design issues with that product, the EX2
follows the original closely. So do we have another highly affordable
and appealing consumer NAS or, in expanding the original My Cloud
concept, has WD again pushed too close to more established NAS devices
with greater functionality? 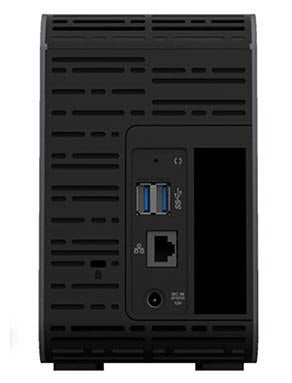 Unlike
the EX4, the EX2 mimics the design of the original My Cloud. This is a
good thing.

Whereas the hard angles of the EX4 were more industrial and
less living room friendly, the EX2’s sweeping curves give it an
appealing, chunky, almost cute appearance and make it a device you could
place just about anywhere.

Since price is a key part of WD’s
attack on the market the build quality of the EX2 isn’t stellar. The
plastic chassis has a lot of flex, most notably in the lid that pops
open like pressing the lid of a kitchen bin.

In this age of tool-less,
hot swappable drive bays we also aren’t particularly impressed by the
weak mechanism WD has fitted for taking the drives in and out.

If you
buy a populated EX2 this may not be a problem, but for those buying an
unpopulated unit it feels fragile and you need to be careful slotting
drives in and out.

In short the EX2 looks great from a distance, but you’ll spot some corner cutting up close.

This
isn’t as evident in the feature set. Like the original My Cloud and
EX4, the EX2 has core NAS functionality like support for DLNA and iTunes
servers, UPnP and FTP as well as multi-user support to set folder
access and permissions. Backups are also a big focus with TimeMachine
support for Macs and WD’s own ‘SmartWare’ software for scheduling
backups on PCs.

WD pitches the My Cloud line as both NAS and
Dropbox alternative and it takes on the latter by enabling remote access
to its data via Android, iOS, PC and Mac apps. Files can be downloaded,
edited or – in the case of media on mobile devices – streamed
(depending on the codec support from your OS).

WD also builds in support
for Google Drive, Dropbox and Microsoft’s newly renamed OneDrive
(previously SkyDrive). Letting you automatically sync or manually
transfer specific folders between them and your My Cloud.

On the
hardware side there isn’t a lot to see. WD doesn’t reveal what chipset
powers the EX2, but accompanying its Gigabit Ethernet port are two USB
3.0 ports (up from the My Cloud’s single port), which allow you to add
further storage capacity via external drives.

Some NAS will let you sync
files from external drives via the USB ports, but here they are purely
for bolstering capacity.

So far so good, but the EX2 maintains a
potentially significant Achilles heel: its lack of expandable RAID.
This won’t affect customers who buy an EX2 with all the storage they
need, but for those hoping to expand it with bigger drives in future
you’ll be out of luck.

Unlike Synology Hybrid RAID (SHR), Netgear X-RAID
or Drobo’s BeyondRAID, the My Cloud’s RAID1 cannot swap to larger
drives and automatically expand its capacity. Instead you’ll have to
transfer everything off the My Cloud, install two larger drives (they
must have matching capacities) then put the data back on again.

This
aspect emphasises the mainstream consumer focus of the line. WD doesn’t
expect you to be upgrading the EX2 and if that is in your plans you
would be better of looking at the more advanced lines from Synology,
Netgear and Drobo.