It takes guts to bill your retro shooter as the best FPS of 1996 – a year that bought us games as legendary as Quake, Duke Nukem 3D, Marathon Infinity and Final Doom. But then that kind of hubris is part of STRAFE’s appeal, taking us back to the time when superstar developers made ridiculous claims about their games, with every other title a would-be groundbreaker. STRAFE doesn’t just have the pixelated looks of the period’s greats but also the attitude; shooters simply don’t get more frantic, action-packed and gore-splattered than this. However, like Quake and Duke Nukem before it, it can’t always match the extravagant rhetoric. It’s not hard to fall for STRAFE, but will that love be deep and lasting?

Give it points for attention to detail. STRAFE gets the look and feel of a ’96 shooter down pat, but also finds space for authentically old-school options screens, an extra modes menu styled like an old DOS prompt and a tutorial video that’s a brilliant send-up of the kind of full-motion video sequences you’d find on pioneering CD-ROMs. Even the audio is pitch-perfect, with a pounding ToyTree soundtrack hewn from the same nineties synth-rock as the music from Doom and Duke Nukem 3D.

And STRAFE plays up to the era’s limitations, hitting you with the kind of block scenery and weird, polygonal monsters found in id’s Quake, plus the same dumb AI that meanders until spotting you, then maniacally barrels full speed ahead. Throw in the spectacularly gruesome fluids engine, spraying voxel claret from every severed arm, punctured torso and blasted head, and you could believe it’s some unreleased classic, discovered on the hard drive of a workstation abandoned by a developer gone bust. 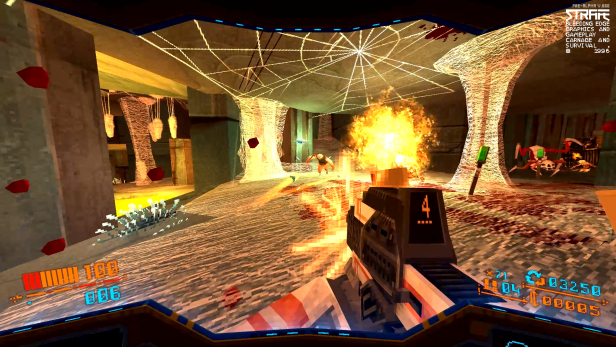 Gameplay-wise, STRAFE wants to – as Jon Romero might once have put it – make you its bitch. This isn’t an FPS of careful marksmanship and cover fire, but one of constant motion, smoking gun barrels and high-stress crowd control. Once triggered, foes attack in floods, hoping to overwhelm before you get a chance to bring them down. If, like me, you’ve played STRAFE’s inspirations, the basic moves will be very familiar. Antagonise the monsters then backpedal whilst blasting. Keep firing at tougher ones while strafing or weaving and don’t stop to rest or you’re be dead. STRAFE likes to play things like the good old days.

Yet STRAFE isn’t like a classic retro shooter in one key respect: it’s also a roguelike. Levels are randomly generated, pulling a new layout of rooms and enemies together each time you enter. Death is also permanent, with no saving or loading possible and everything resetting every time you die. You can find new weapons and even upgrade your existing principle arm – the shotgun, SMG or railgun selected at the start. However, the weapons you pick-up only last until they run out of ammo, while you’ll lose all your upgrades on your demise with no way to get it back again. And that demise is rarely long in coming, because STRAFE is pretty damn hard.

Your ordinary cannon fodder clawing beasties aren’t that dangerous except in numbers, but once you have foes blasting away at you or turrets firing missiles, health disappears fast. Medpacks are limited to a small number found in isolated wall-mounted units and you can only replace your armour by spending salvage scavenged from fallen enemies in machines, which also dispense ammo once you start running out. To make things even tougher, each game starts at the same opening level unless you can find and repair a teleport at the start of the each themed zone. 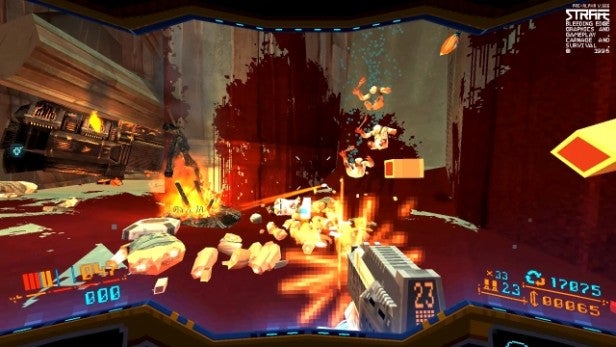 And this is where the doubts I have about STRAFE set in. There are no adjustable difficulty settings and – to my mind – the initial level is a bit too high. You can easily spend hours pushing through that first zone – a wrecked, monster-haunted starship – before even making it to the zones beyond. You can easily get tired of scraping through to the next level with a minimum of health only to get killed by a cheap turret shot or a cluster of monsters hiding underneath a lift to find yourself back at square one.

You also can’t help feeling that the great late nineties shooters triumphed because of the care and attention that went into the level design. Sure, Quake and Duke Nukem weren’t entirely great, with the former inconsistently brilliant and the latter running out of ideas halfway through, but the best levels – like the best levels of Doom, Doom 2 and Hexen before them – were full of clever secrets, sudden scares, tough monster battles and moments of wonder. They knew when to pull the rug out from under you and kill you, but also when and how to give you a fighting chance. STRAFE, by comparison, feels oddly one-dimensional. It has the look and feel of a classic nineties shooter, but not the wider vision.

That doesn’t mean there aren’t some great touches and in-jokes to be found. I love the way barrels can be picked up and thrown like a high-risk grenade, killing monster mobs outright if you can send one in the right direction, killing you if you’re too close or the barrel gets hit by an unlucky shot. I love the weapons that pay homage to old favourites like Doom’s plasma gun or Starsiege Tribes’ disk launcher, plus a few that reference more recent hits. I love the way you can cover patches of damaging acid with sprays of monster blood. A recreation of Wolfenstein as it might have been if ported to the Gameboy is genius. Say what you like about Pixel Titans, but they’re not short of good ideas. 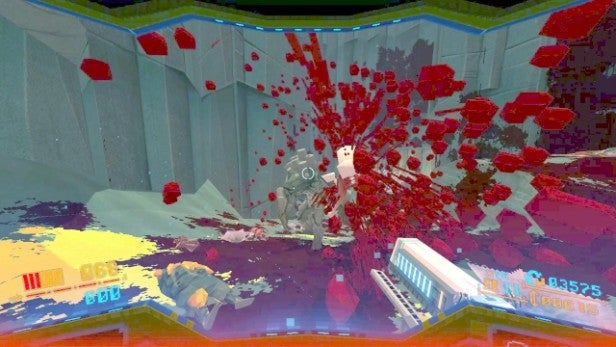 Yet, all the same, there’s something a little off-kilter about their would-be masterwork. I don’t worry about the fact that there are only four zones – I worry whether many players will have the skill and patience required to see them. I don’t worry about the thrill of the minute-to-minute gameplay, but about the niggling feeling that the rewards of playing aren’t quite balanced with the effort involved.

Most of all, I worry that the mechanisms that make even hardcore games like the Souls series and Nioh approachable – that make you feel each death brings you closer to eventual victory – aren’t there, and that victory rests more on whether STRAFE plays nice with the next random layout. STRAFE doesn’t want to teach you how to be a skilful player, but just expects you to be mighty from a start.

STRAFE will be a godsend to a sizable niche of players; those who’ve milked last year’s superb Doom reboot for every drop of challenge and are looking for something new. They’ll love the demanding, unremitting, unforgiving action and go big for the forthcoming daily challenge and speedrun modes. They’ll adore the arena-style MurderZone, every bit as tough and addictive as the main game. If you’re outside that niche, though, then you might find that STRAFE isn’t for you. Personally, I’ve found a little goes a long, long way and I’m not really sure I want more.

Verdict
If you’re looking for a challenging, retro-style FPS that takes no prisoners, STRAFE has you covered. It has the replayability and difficulty of a perma-death roguelike wrapped in the style and attitude of a classic nineties shooter. Yet where Wolfenstein: The Old Blood and Doom 2016 revived old-school action in a way anyone could enjoy, STRAFE is a hardcore experience, through and through. Sign up if you think you’re hard enough, but not if you don’t have the skills.