Easy to attach to practically any type of radiator, the SpeedComfort system is designed to push air through your radiators. This process improves the natural convection process, making rooms feel more comfortable with less temperature variance across them. Fully automatic and practically silent operation, the SpeedComfort is a simple and practical upgrade to any radiator – but the high cost is hard to ignore.

Most of our homes are heated by radiators powered by a central heating system. Entirely passive, radiators rely on thermal convection to heat a room. SpeedComfort is designed to make this process faster, more efficiently distributing heat to keep heating bills down and rooms at the ideal temperature.

Conventional radiators use convection to heat a room. As the radiator warms up, it heats the air around it. As this heated air rises, it pulls cold air in and through the radiator, creating a vertical current that slowly warms all the air in your room. It’s a process that works, but one that achieves hot air at the top of your room (higher than your thermostat is set) but cooler air at ground level.

SpeedComfort says that its system can save you up to 22% on your heating bills since your room will warm quicker and therefore, your thermostat will turn off faster. A large part of this saving comes from SpeedComfort’s advice to turn your boiler down to 60ºC, which gives a 15% energy saving.

Lowering boiler temperature should be done regardless, particularly with condensing boilers, since it allows your heating to reclaim more heat from waste gasses. Head to what’s the best temperature for a condensing boiler to see how condensing can improve efficiency and cut running costs. The rest of the saving comes from faster warm-up times, with SpeedComfort saying it makes radiators 20% more powerful.

Of course, individual savings will vary from home to home. For example, a well-insulated home using a multi-zone heating system and an OpenTherm connection won’t see as much of a difference. However, those in drafty old homes, running a dumb thermostat could see a more significant improvement.

SpeedComfort is a simple system to retrofit to any radiator. The base system is a single device, consisting of three fans that magnetically attaches to the bottom of the radiator. It’s recommended that you cover the entire length of the radiator for the best result, which may require you to have two or three units. 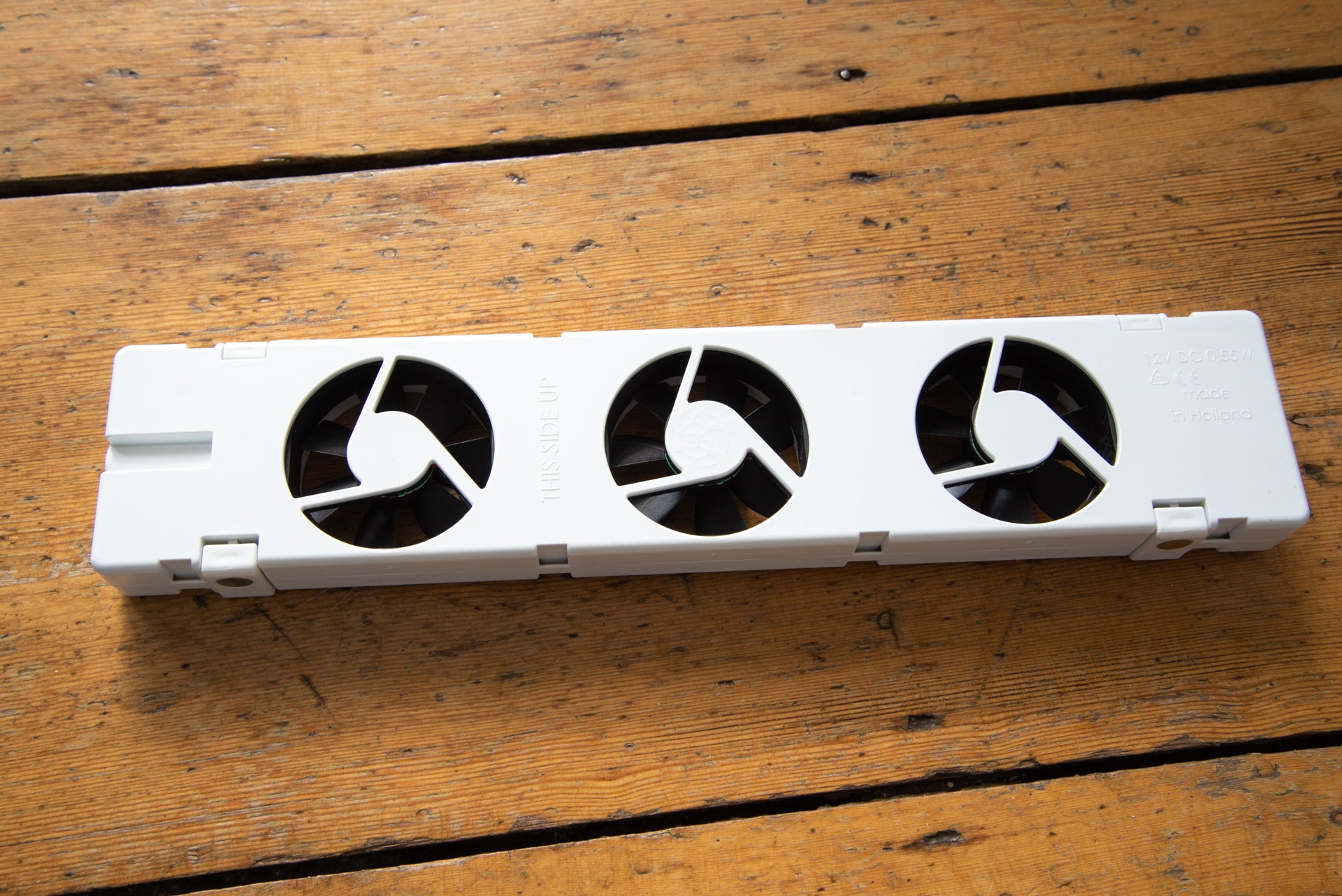 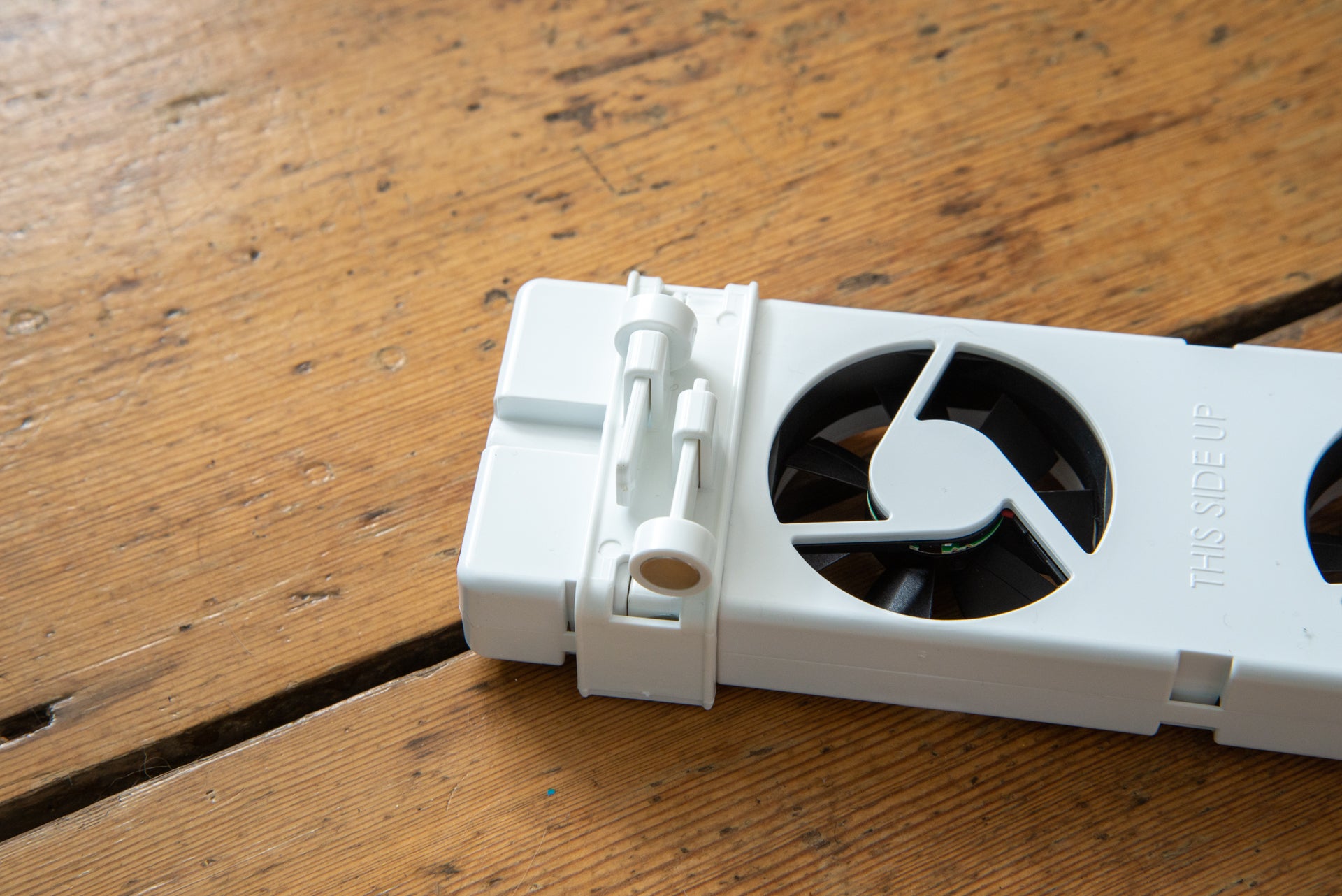 Installation is super-easy. The first SpeedComfort should be placed as close to a power socket as you can get it. I found it easy to clip underneath the radiator with the magnetic spring-loading clips easily grabbing hold of the radiator. 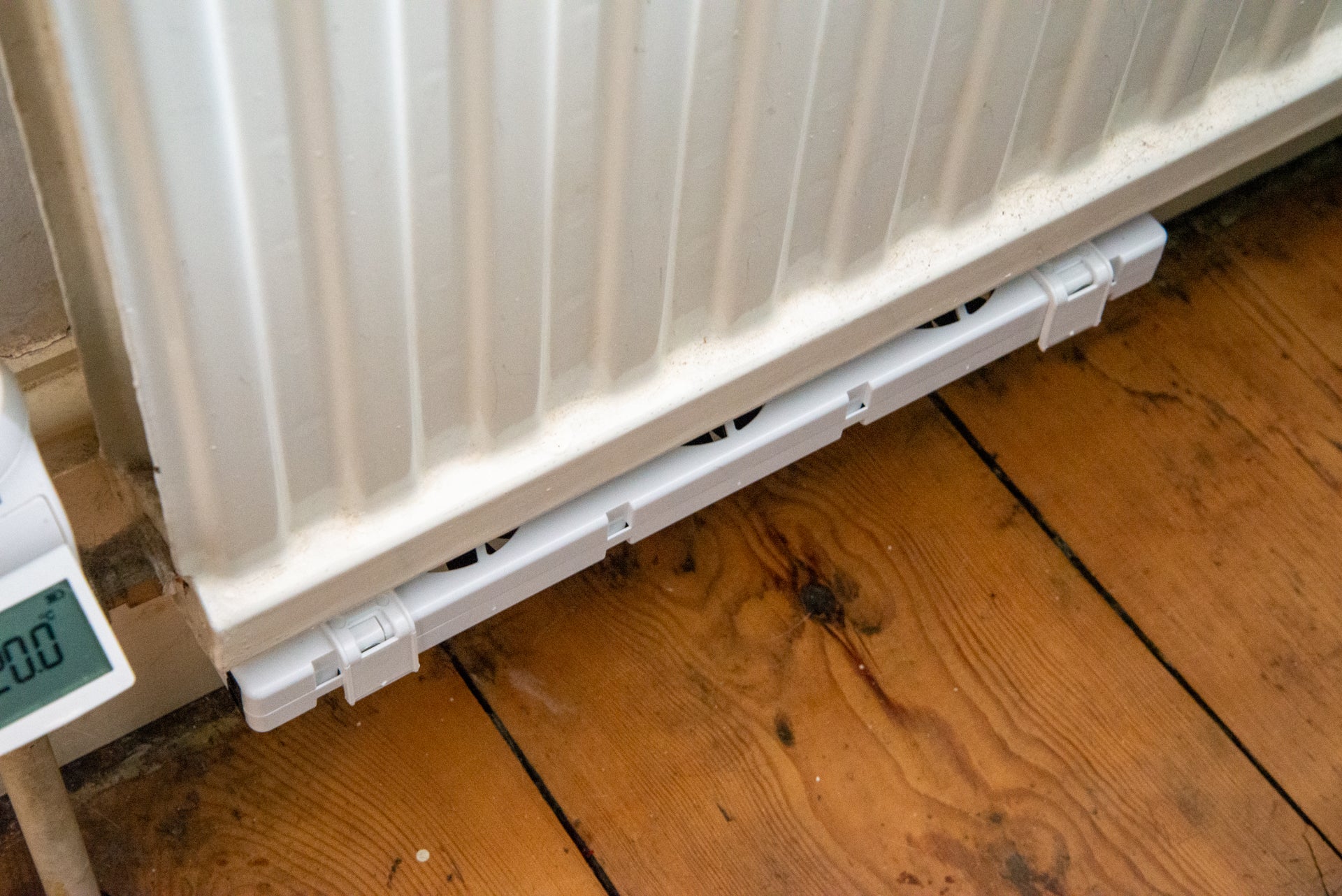 It’s easy to get the fans attached and wired up

There’s a magnetic temperature sensor that has to be plugged into the top port of the first SpeedComfort, and a power adapter that plugs into the bottom port. The diagram on the back of the box shows this, but it would have been nice if the inputs were labelled. 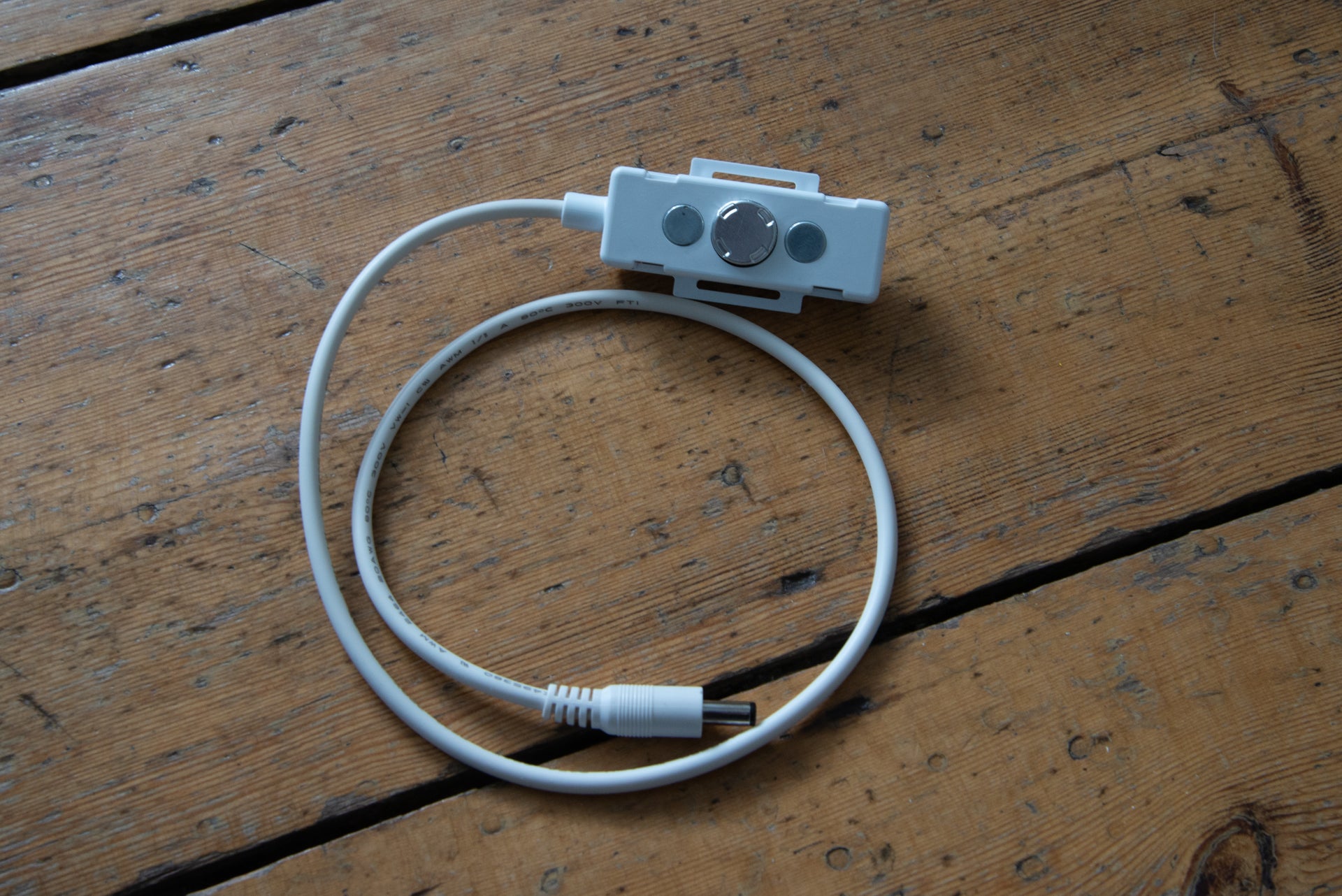 The temperature sensor dictates when the fans will run

The remaining SpeedComforts are daisy-chained using the provided cables. All-in, it took me less than five minutes to have the system set up and ready to go.

Placing the fans underneath the radiator is a far neater solution than fans that sit on top. This is particularly true where you have furniture in front of a radiator, as I do in my living room. Thanks to the SpeedComfort design, the fans are entirely out of sight.

Thanks to the supplied temperature probe, the SpeedComfort only turns on when the radiator heats up to a surface temperature of 28ºC and then turns off when the heater reaches 25ºC. In action, the fans are exceptionally quiet. In fact, bar the occasional gentle fan rattle, I couldn’t hear them above the noise of water rushing around the radiator. The only other sound is a click when the temperature sensor turns on or off.

From a purely observational point of view, the SpeedComfort made my living room in a brick-build Victorian terrace heat up faster and more evenly, making it more comfortable to enter. This is usually a room that’s far colder than the rest of the house, even with the heating going at full blast. And, it isn’t helped by the fact that there is a sofa sitting in front of the radiator, as that’s the only choice.

Using a thermal imaging camera, you can see the SpeedComfort in operation. Without the fans turned on, heat gently rises out of the radiator. Turn on the SpeedComfort, however, and the fans push up air at a faster rate; this is evident by the bigger block of orange above the hot yellow radiator. 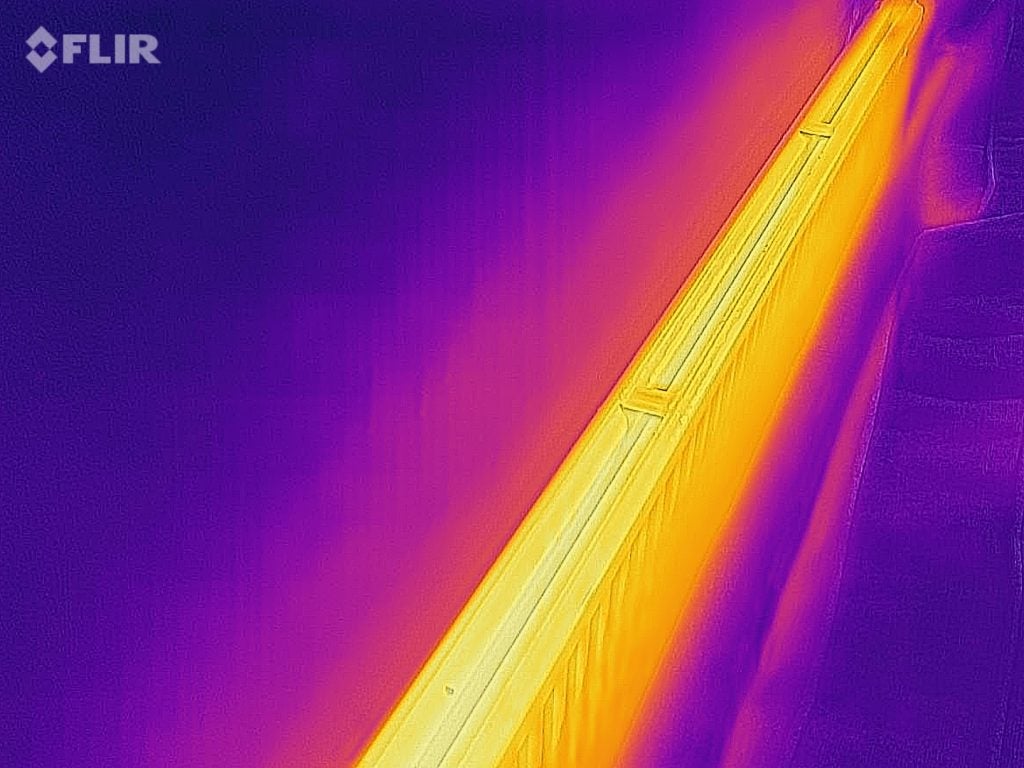 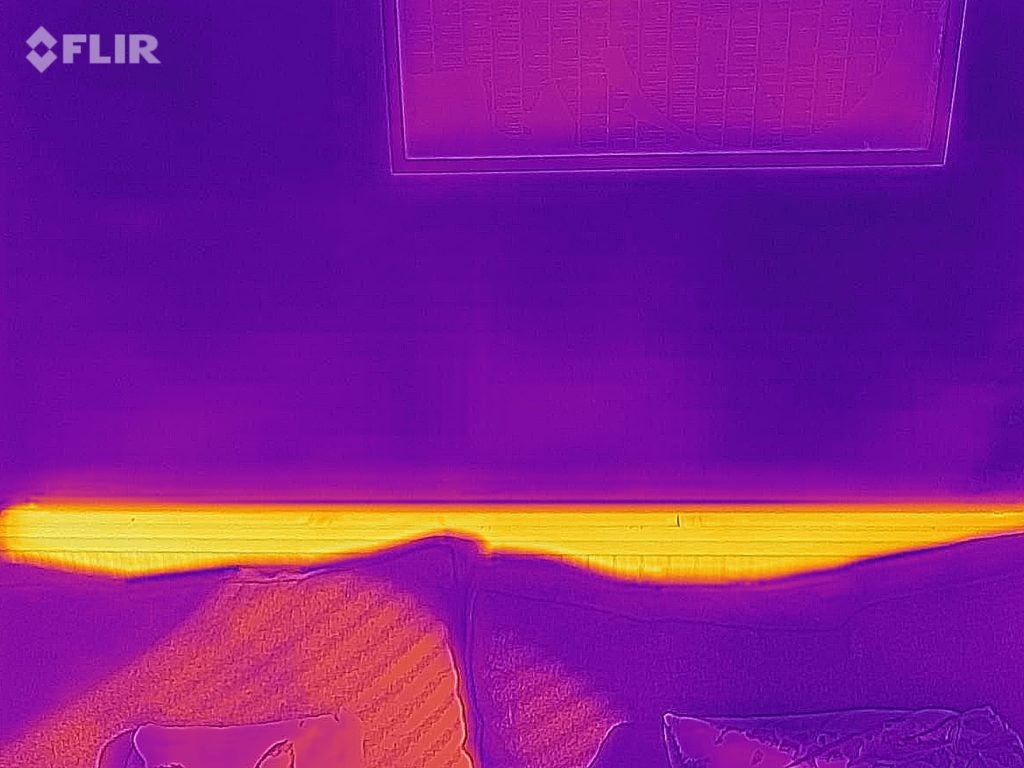 I also took some temperature readings high up in the room, by the ceiling, with the radiator on full blast. Measuring from the top of the room with the SpeedComfort turned off, the temperature was 27ºC; turned on, I had a temperature of 26.1ºC.

Each SpeedComfort has a power rating of 0.6W, which SpeedComfort says uses 0.9kwh per heating season, costing less than 15p per season run. Even if you have three on at the same time, that’s just a 45p run cost for a radiator.

Should you buy the SpeedComfort?

Certainly, SpeedComfort can aid convection and make the temperature through a room more even and therefore more comfortable. Energy savings are much harder to measure, particularly if you already have a smart thermostat or multi-room heating system. Then, there’s the price, particularly if you have to buy multiple units: it could cost you more to fit SpeedComfort to every radiator than the price of a multi-room heating system, such as HeatGenius.

That’s not to say that SpeedComfort isn’t worth it. Most houses, particularly old ones, tend to have a room or two that never feels comfortable. In such instances, and in my experience, SpeedComfort helps even out the temperature and boost warm-up times, making for a more comfortable environment. It’s a sleeker, more attractive fan option than the top-mounted competition, too.