Like most ‘non Nexus’ Android devices, the Sony Xperia Tablet Z has its own custom UI rather than vanilla Android. Not only that, it’s a little disappointing to discover it’s not running the most recent version, opting instead for version 4.1.2.

Sony’s custom skin is far from the most offensive Android overlay – it lacks the garish bombast of Samsung’s TouchWiz, for instance. But neither is it an unqualified success. 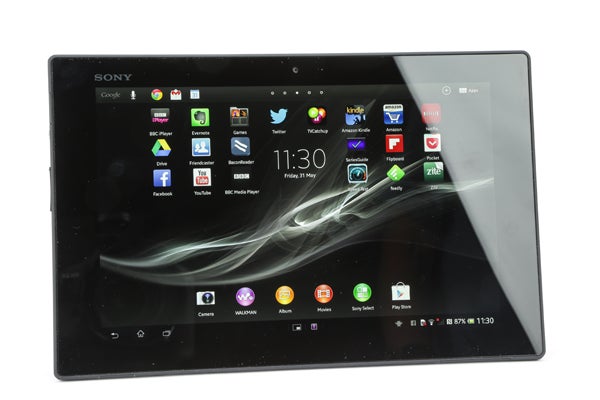 At the top it adds the option for four ‘quick launch’ icons. A nice touch, until you realise the touch zones for each icon are a little too tight for comfort – we often went for one only to hit the icon directly below on the main homescreen.

Like LG and Samsung, Sony’s also taken to adding ‘small apps’ that sit above the main interface and other apps. These are launched via a small icon along the bottom and include a calculator app, notes, a drawing/annotation app and even a pop-up browser. They’re useful in a clumsy kind of way, but they don’t feel essential.

Another common theme, one started by Sony in fact, is the ability to control your TV and other home AV appliances using the Sony Xperia Tablet Z via its built-in IR blaster and dedicated universal remote app.

If you’re interested in this specific feature, however, prepare for disappointment. It’s far from a full ‘universal remote’ experience. It only supports rough matches against product type and brand, rather than specific models. You then have to choose between a list of 20 or so ‘types’ of remote to find the one that best matches your device. It struggled with the Virgin Media Tivo box, and subsequently crashed continually. The fact it only works properly in landscape mode doesn’t help – it feels bulky and unwieldy compared to an actual remote. 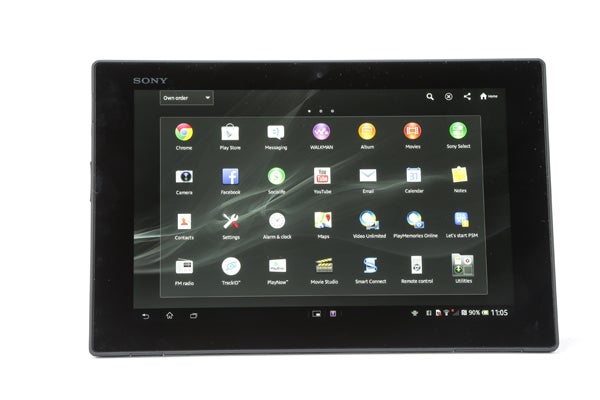 Elsewhere, the experience is as you might expect of Android. That’s a blessing and a curse: a blessing because you enjoy excellent integration with Google services and Google stock apps; a curse because it still feels like Android badly lacks the depth of tablet apps it now enjoys in the mobile space.

That’s less of a problem on smaller tablets where mobile apps work reasonably well, but larger tablets don’t have that luxury. Most mobile apps scale up, of course, but they don’t make good use of the extra screen estate

We’d also add that the interface doesn’t feel quite as slick and smooth as recent Androids with the most up-to-date software. It’s only a small point, but another that tips the balance in favour of the Google Nexus 10. 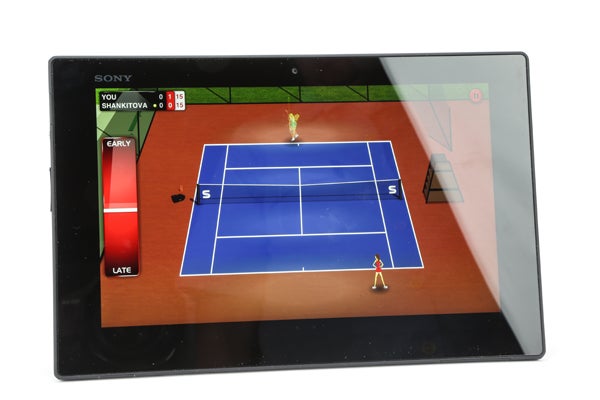 Some slight lag aside, the Sony Xperia Tablet Z is a very fast tablet. Its 1.5GHz Qualcomm Snapdragon P4 Pro processor doesn’t quite match the latest and greatest such as the Qualcomm Snapdragon 600 found in the Samsung Galaxy S4, but it’s noticeably faster than the Nexus 10’s quad-core processor and shares the same Adreno 320 graphics core as the S4.

In the popular, and free, AnTuTu benchmark (a test which covers CPU, GPU and memory performance), the Sony Xperia Tablet Z scored a very good 18,386, 26% higher than the Nexus 10. This won’t be immediately obvious in normal use, but it means the Sony runs intensive games better – not least because it has fewer pixels to drive than the Nexus 10. This score marks the Sony Xperia Tablet Z out as one of the fastest Android tablets currently available. Games like Real Racing 3 pose no problems.