The 75X9405C sits at the top of Sony’s 2015 range of 4K TVs. As well as being a huge 75-incher with a screen sandwiched between two massive extensions for the high-resolution speakers, it comes packing a fearsome array of features.

These include the new Android TV platform, a direct LED lighting system with local dimming, and Sony’s new X1 video processing system. It also has support for both high dynamic range (HDR) video and the excellent YouView catch-up TV platform, following updates due this summer.

In an era of size-zero TVs, the 75X9405C looks absolutely enormous. Some of this is down, of course, to its 75-inch widescreen panel. But also sticking a big fat pair of fingers up at super-skinny convention are the set’s left and right wings, which extend for a whole five inches beyond the picture’s edge. 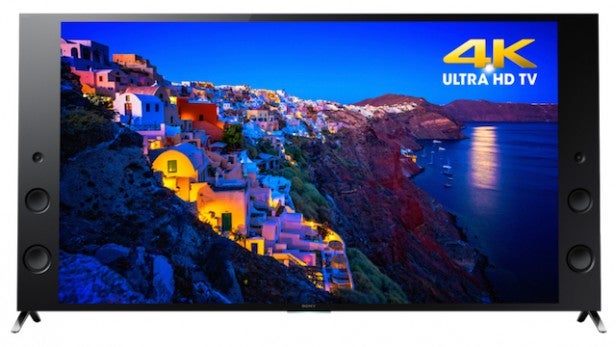 This isn’t just an act of aesthetic rebellion, though. It’s motivated by very good intentions, as it allows Sony to equip the 75X9405C with its latest generation of forward-facing magnetic fluid speakers. We’ve been seriously impressed by these on previous Sony TV generations, but here they’ve been upgraded yet again. So much so that the TV is the first in the world to be rated as compatible with Hi-Res Audio playback, with full support for FLAC and WAV files up to 96kHz/24-bit resolution.

The high-quality speakers haven’t just had an impact on the TV’s width either. They’ve also required Sony to design the set like a wedge, where its rear is deeper at the bottom than it is at the top. The depth of this wedge effect is considerably narrower than it was on 2014’s equivalent models, though, and so the 75X9405C’s design doesn’t feel cumbersome despite its massiveness.

It also wears its size gloriously well thanks to its beautiful, one-level fascia and the way the six audio drivers feel like they’ve been sculpted right out of the glass fascia.

One last design point to stress is that this screen isn’t curved. Sony doesn’t seem interested in following Samsung’s lead on that.

The 75X9405C’s connections are hidden under a removable flap on the set’s rear and comprise all the usual suspects. Most notably four HDMI 2.0 ports and three USBs for recording from the built-in Freesat and Freeview HD tuners to USB storage drives or playing back USB-stored multimedia files. For internet connection there’s both Ethernet and integrated Wi-Fi.

The 75X9405C’s network features are extensive to say the least. For starters Sony’s adoption of the new Android TV smart platform enables it to offer Google Cast support and extensive interactivity with networked Android smart devices. Apple fans can get in on some of the fun too via Apple apps that support ‘Casting’ and compatibility with the TV’s surprisingly impressive voice-recognition system, which makes it easier to input terms into search engines. 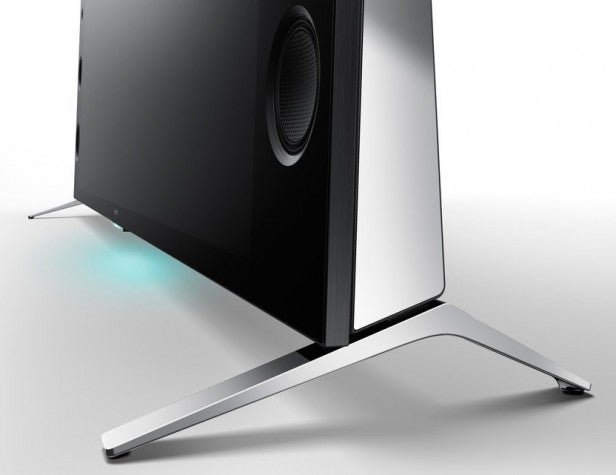 You can also stream all the usual multimedia file types from connected DLNA devices as well as a few you don’t usually get, namely FLAC and WAV high-resolution audio files up to 96kHz/24bit. It feels strange to be talking about such audio stuff in a TV review, but that, happily, is the way Sony rolls these days.

The most important thing about the 75X9405C’s network connectivity, though, is access to the Android TV system’s extensive range of online content.

This isn’t actually the first time Sony has flirted with Google; back in 2010 it launched some models with Google TV built in, as well as Google TV set-top boxes in 2012. But these were anything but a resounding success.

The latest Android TV platform immediately reveals itself to be a significant step forward from those earlier Google dabbles. However, as we’ll go into in detail in a separate review of the Sony Android TV system in the next few days, there’s still a whiff of white elephant about it when compared with the much more streamlined approaches of the LG webOS and Samsung Tizen systems.

Sony’s own home-grown smart TV tools often feel more useful than the Android parts of the 75X9405C’s smart system, and it’s also a relief that Sony is adding YouView functionality this summer. Without it Android would have been hamstrung by its failure to carry any of the UK’s key catch-up TV platforms. 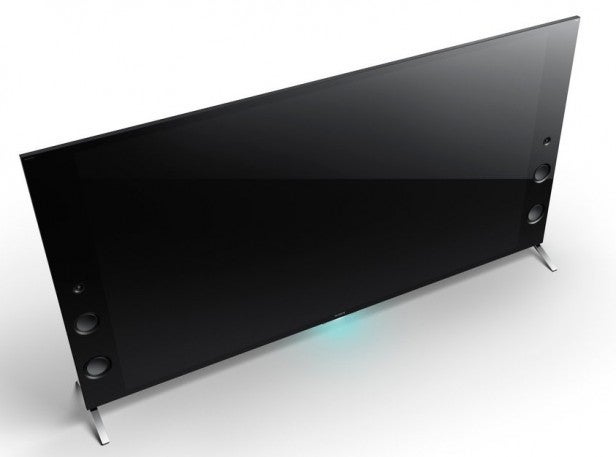 The new combination of Android and YouView isn’t the only area where the 75X9405C gives us lots to talk about. There’s also an awful lot going on with its picture technology.

The screen’s built to the 3840×2160 4K UHD resolution and will also play HDR content following a firmware update due over the summer. Since Sony informs us that its HDMI 2.0 ports should be updatable to 2.0a ports via firmware, this HDR update should include support for UHD Blu-ray discs as well as Netflix and Amazon HDR streams.

Another key screen specification finds the 75X9405C using a direct LED lighting array rather than the edge-mounted LED system used for all of Sony’s other 2015 4K TVs. When coupled, as it is here, with local dimming, direct LED systems can deliver far superior contrast on both a micro and macro level than you can get with edge LED lighting.

The screen also benefits from the latest version of Sony’s Triluminos colour-enrichment technology. This marks a significant step forward from last year’s iteration thanks in no small part to the fact that it’s powered by Sony’s new X1 video processing chip.

This chip has been two years in the making, and is powerful enough to deliver a whole range of new picture features. Where Triluminos is concerned, X1 takes the technology’s wider colour gamut to a new level by enabling ‘Precision Colour Mapping’. This means the TV’s processing is powerful enough to work on enhancing every colour in a picture individually in real time rather than the usual approach of only being able to work on an image’s colours on a macro/whole-image level. The latter approach usually means only some of the colours in the picture appear at their optimum level. 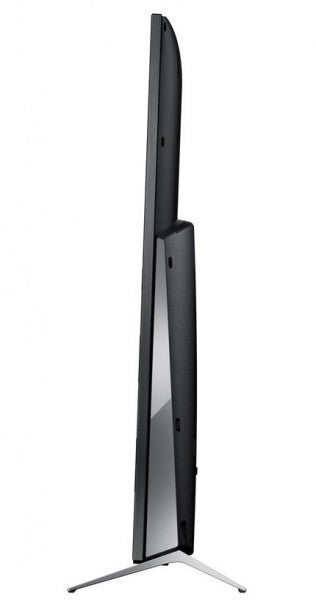 Sony isn’t usually fond of putting numbers on features, but here it’s made an exception by claiming that its new Triluminos technology delivers 150 times the colour adjustment range of its 2014 TVs.

The X1 chip is also claimed to bolster sharpness and detailing. This is because it’s apparently even cleverer than Sony’s previous X-Reality chipsets at using a built-in database to recognise the sort of content you’re watching – especially where native 4K content sources are concerned – and so can automatically choose the best picture settings for your content more successfully.

The X1 processor also claims much improved noise-reduction systems that now include special routines for the key 4K Streaming systems (AVC, HEVC and VP9), as well as a new algorithm that niftily breaks noise up into smaller dots to reduce its intensity.

The X1 processing introduces the brilliantly named Self-Similarity Super Resolution system too. This is designed to avoid the tendency for upscaling engines to make thin lines look fatter by relating the upscaled image back to the HD original before finalising what appears on screen.

X1 is claimed to boost the new Sony 4K TVs’ contrast performance by better recognising and manipulating light to reproduce subtle half tones, as well as boosting both black level response and white/colour peaks – expand contrast, in other words. Finally, by using face-detection technology, it should reproduce more accurate skin tones.

A couple of other key features find the version of Sony’s MotionFlow processing on the 75X9405C claiming a 1200Hz effect, and its 3D system using active (full-resolution) technology, backed up by the inclusion of two pairs of active shutter glasses.

Sony has, for a couple of years now, been streets ahead of any other brand when it comes to its TVs optimising their picture settings automatically. And the arrival of X1 has taken this key Sony advantage to a whole new level – in some ways. 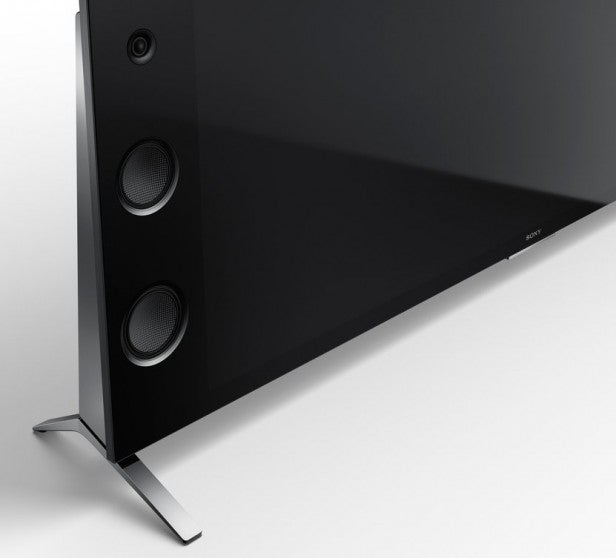 The 75X9405C delivers mostly brilliant images right out of the box. This is thanks to the X1 system, the extensiveness of Sony’s video type database, a surprisingly effective ambient light-compensation system and, it seems to us, the confidence of Sony’s TV engineers to deliver settings they think best suit the content and screen rather than just looking aggressive.

Even if you don’t like the Standard picture preset – although it’s our suspicion that you will – Sony also provides a much wider selection of themed picture preset options than the competition. Each of these options has been designed with the same amount of care and common sense as the Standard one.

That said, there are areas where tweaking things can yield benefits depending on your tastes and, potentially, your viewing distance.

Die-hard adherents to the Rec 709 standard may wish to tame the set’s intense colour response, though to us this would seem to be removing a good chunk of what makes the 75X9405C special. We’d also recommend that you temper the image’s contrast and local dimming settings slightly to reduce the potential for light blooms when very bright objects appear against very dark backdrops. For similar reasons we’d also set the Black Adjust and X-Tended Dynamic Range features to Low, or possibly Off in Black Adjust’s case.

The only area, surprisingly, where Sony’s knack for auto-optimisation comes a cropper is with its new Reality Creation processing engine. Using the default settings for this feature can leave pictures looking really quite noisy and speckly, at least if your content is grainy in the first place. We found we needed to turn the set’s sharpness down to around 55 and the Reality Creation Resolution setting down to around 35 in order to stop the noise distracting us, although you may be able to leave it a little higher if you’re sat well back from the TV. The default 65 setting, though, certainly isn’t recommended.