What is the Samsung Tizen Smart TV System for 2015?

After more or less treading water with its 2014 Smart TV system, Samsung has gone back to the drawing board for 2015 and come up with a radical new smart solution built around its Tizen operating system. But has it managed to make such a radical transition work first time?

Hitting the Smart Hub button on Samsung’s latest remote controls – more on these remotes later – immediately reveals how big a change the move to Tizen has delivered. The clunky full-screen menus that have dominated Samsung’s smart TV system for the past couple of years are replaced – mostly – by a much slicker overlaid menu system of large, colourful icons that only occupies a relatively small screen area. 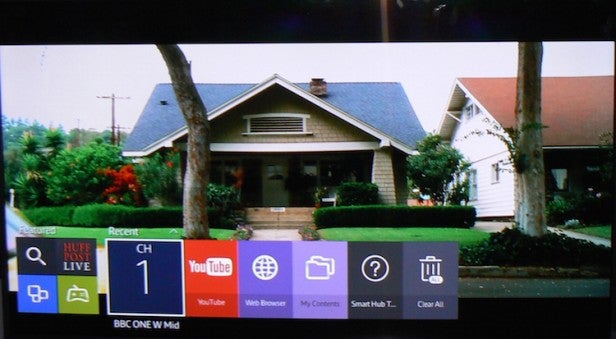 Taking this overlaying approach – as pioneered last year by LG with its WebOS smart engine – provides two immediate benefits. First it means you and other members of your household can keep watching full-screen TV while the menus are navigated. Second it means that Samsung has had to be much more disciplined about what it shows on screen.

In other words, opting to use just a strip of icons a few inches high along the bottom of the screen has meant Samsung has had to focus much more on only displaying links to the sort of content TV viewers actually want to get access to.

All too often with Samsung’s previous smart system we found ourselves feeling like we were being told what Samsung thought we should be watching/using, rather than getting quick access to just the stuff we actually wanted.

So what exactly are the options Samsung has elected to give you on the new Tizen home screen? To the left there’s a ‘Featured’ box containing four mini icons that cycle around to remind you of further apps and features available if you delve deeper into the Tizen menus. We’ll look at these more in a moment. But the bulk of the opening menu screen shows you a horizontal list of recent sources.

This list can show any source of any type, be it an app or an AV input, since every content source, even each individual HDMI and USB port, is treated as its own app. Up to 14 icon ‘slots’ are available for your recent sources, plus, crucially, you can opt to ‘pin’ your favourite, most used apps permanently to the left side of the Recent list.

An icon showing a bin at the end of the list lets you ‘Clear All’ if you want to start your Recent list afresh or, ahem, hide some activity you may not be proud of.

This contextual options side-menu also lets you delete individual sources from the Recent list as well as, rather handily, enabling you (on some sets) to activate a side by side view option that splits the screen in half so you can continue watching your current source on one side and the newly selected choice on the other. 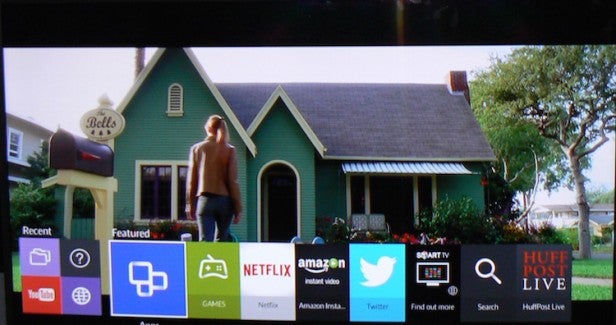 There are a few limitations to the Recent menu, though. First, the list only shows the last broadcast channel you watched, not multiple channels. In other words, it treats the TV tuner as a content source rather than each individual channel as a content source, as might have been more useful. Second, there’s no potential for personalisation, whereby the TV might recognise or be able to be told who’s using the TV and so enable the creation and presentation of different ‘home’ screens for different people. The TV merely presents an overview of your entire household’s activity.

Personalised menus can, to be fair, be fiddly to set up and manage in a large household. But if you’re going to try and streamline the user experience in such a potentially personalised way as Tizen does, you do create an expectation that this streamlining could be adapted to different members of the home.

Turning to the Featured box, you can’t select each of the four small tiles shown within the main Featured box individually – they’re just ‘showcases’ for what you’re missing. You can only select the full Featured window, and then the menu flips around so that icons of your Recent list populate the box on the left, while more Featured options stretch out across the bottom of the screen.

Up to 14 items can appear in the Featured list, with the first two being fixed links to Samsung’s Apps and Game stores, and the last two being reserved for apps the user wants to bookmark. The app links in between feature what Samsung calls ‘a rotation of the most popular apps’, with the most recently used of the recommended apps moving to the first available slot on the left.

The Featured list could also be used, we guess, to promote new apps or to pass on useful information; for instance, at the time of writing there was an icon for a Samsung guide to the TV’s smart features, but there could also be, say, a link to information on what the latest firmware update has brought to the party. 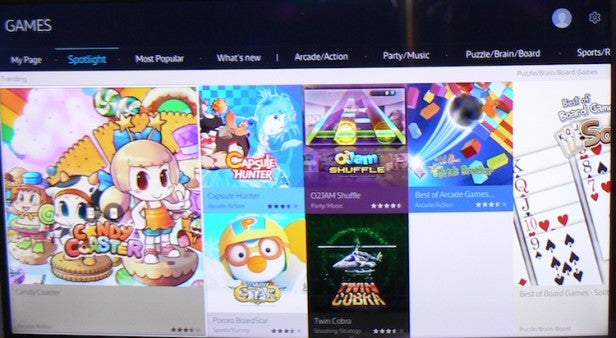 There is a limit to the Featured list’s usefulness, though, based around the fact that at the moment the featured content doesn’t fully take into account your own viewing habits and tastes.

This brings us to another curious omission from the current Tizen set up. For at the time of writing there’s no video/TV recommendations system of the sort used to good effect on Samsung’s previous couple of Smart TV generations. Samsung assures us that it’s working on adding this useful feature to its Tizen TVs soon, but we don’t have any firm date yet.

Aside from the missing Recommendations system, the only parts of the new Tizen interface that feel like you’ve stepped back to 2014 are the Apps and Game menus. Selecting their icons from the Featured list suddenly throws up full screen menus all but identical to the same menu areas found on last year’s Samsung TVs. This full-screen approach feels dated and out of kilter with the efficient coolness of the other menus, and the unnecessary large size of the icons makes browsing quite a long-winded process. Though both the Apps and Games main screens do at least carry genre filters along the top to help you narrow down the selection.

It’s also good to see from the Apps store that Samsung continues to offer a huge amount of content on its smart platform. We retain doubts about whether the majority of apps on offer really make much sense in a TV environment, but Samsung is certainly one of the best brands around when it comes to providing the sort of video streaming apps that most people DO want their TVs to offer.

For instance, you get the key UK catchup platforms of the BBC iPlayer, the ITV Player, 4OD and Demand 5, plus Netflix and Amazon Instant complete with their UHD incarnations if your broadband is up to the job and your Samsung TV is a UHD model. There are a number of other more niche services on there too, including ToonsTV, Fashionbox Live, Filmbox Live, Docubox Live, Fightbox live, BBC Sport and iConcerts, leaving Now TV and UltraFlix (which offers 4K streams to Samsung’s US TVs) as the only major omissions. 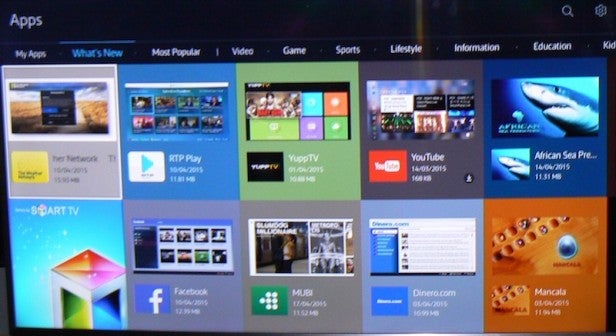 One final big leap forward delivered by the shift to a Tizen OS is enhanced compatibility with tablets and Smartphones. The latest Samsung TV app lets you stream what’s on your TV to your smart device, or throw multimedia from your smart device to the screen simply by selecting its icon from your smart device (video, music and photos are all imported to the app for ease) and swiping it towards the TV.

If you’ve got a Samsung phone from the S4/Note 3 onwards the TV will even automatically detect the presence of your phone when you enter the room, so there’s no need to manually make a connection. This sort of automatic connectivity is exactly the sort of feature a modern TV ought to be offering if it wants to make sure everyone gets the maximum benefit from its smart features.

Used as the main TV for the review period
Tested for more than a week
Tested using industry calibrated tools, discs and with real world use
Tested with broadcast content (HD/SD), video streams and demo discs
Next
Interface, Performance and Verdict Review