Sony has been producing SteadyShot-capable Handycam camcorders for some time now. Over the years, the company has refined the tech so as to produce better and more stable footage. It means your favourite memories aren’t ruined by wibbly-wobbly video that makes you feel a little seasick.

With its new flagship Sony FDR-X3000R Action Cam, the company has managed to miniaturise its Balanced Optical SteadyShot (the company calls this BOSS) technology into a small action camera.

The BOSS technology can be thought of as a completely floating-lens unit that moves to counteract your hand movements, resulting in far steadier footage and a superior alternative to the electronic image stabilisation that’s used by rivals such as the GoPro Hero 5 Black.

Since the image stabilisation is completely mechanical, rather than done in software, it even works when shooting 4K, which wasn’t possible with the previous flagship FDR-X1000V Action Cam.

At £500, the FDR-X3000 is the priciest action camera on the market, but with its immensely stable footage and fantastic still image quality, it will appeal to both travellers and adrenaline junkies alike. 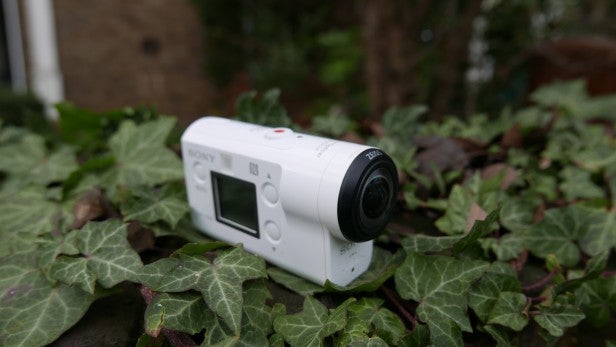 The design of the FDR-X3000 remains consistent with Sony’s previous action cameras, such as the HDR-AS50 Action Cam. Rather than creating another “me too” rectangular camera such as the GoPro, Sony’s action cameras have always resembled little camcorders.

While I’ve previously said that I liked the shape of Sony’s action cameras because they were ergonomic for hand-holding, this is even more pertinent than before with the FDR-X3000 due to just how great the optical image stabilisation is. It means you’re more able to shoot video while walking along without any worries.

Like the FDR-X1000V before it, the FDR-X3000 is available in a glossy white finish. Weighing 114g for the body and battery, it’s actually the same weight as the FDR-X1000V, which is impressive considering the image stabilisation technology featured.

The camera body alone is water-resistant to IPX4 (splash-proof), but you’ll need to pop it into its included waterproof case if you want to use it underwater. This adds dust- and water-resistance to 60m, but also adds a considerable amount to the overall size of the unit. 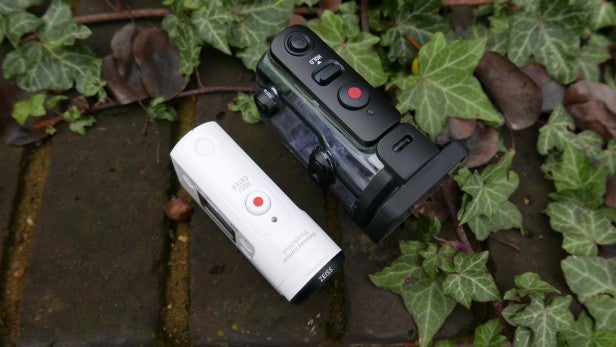 Sony must have been listening to my complaints about the HDR-AS50, because there are now three recording lights where there were only two previously. The light on the front of the camera will make it more obvious when you’re filming yourself. 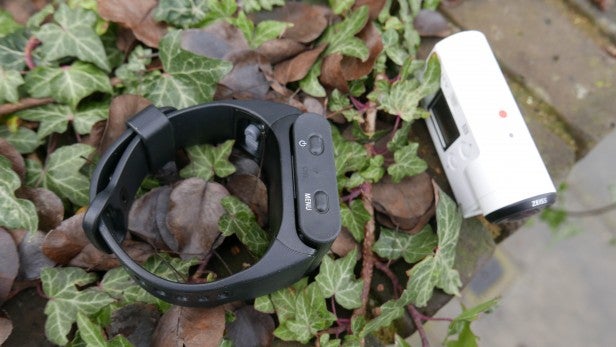 The new remote control is 24% lighter and 30% smaller than older models. You can power on the camera via the remote and adjust the digital zoom using controls on the side. The menus on the Live-View Remote now also replicates that of the main camera body. On previous Sony action cameras, the remote menu felt confusing to navigate since everything was laid out differently to the main camera.

The new version of the remote control also now detaches from the included wrist mount, which sees you wearing it like a rather chunky watch. Sony has released a number of compatible accessories to which you can attach the remote, including the Shooting Grip, a handgrip/tripod combo, and the Finger Grip. 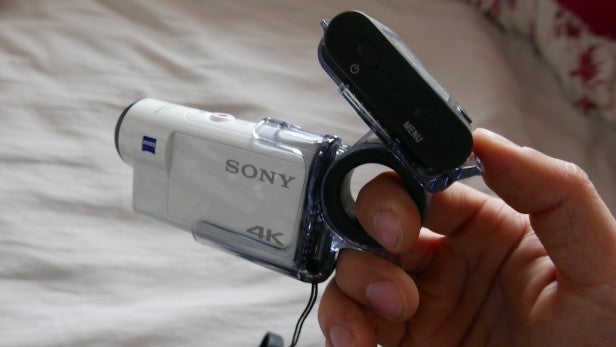 The latter will appeal to the travel-blogger types due to its small, convenient size. The FDR-X3000 simply slides into the holster and you hold the camera with your index finger placed through the trigger-like loop. You can then attach the Live-View Remote, which can be tilted for high- or low-angle shooting easily with your thumb.

I used this plenty during a recent trip to Paris and my main complaint is that it can be a little difficult to keep the camera pointed horizontally. Occasionally, I’d point the camera too low or too high. Some extra grip for your middle finger to balance the weight would have helped.

Most annoying about the Live-View Remote Control is that it can take about 5 seconds between hitting the power button on the remote and the camera actually powering on, then a further 10 seconds before you get a visual output from the camera’s sensor on the remote’s screen. 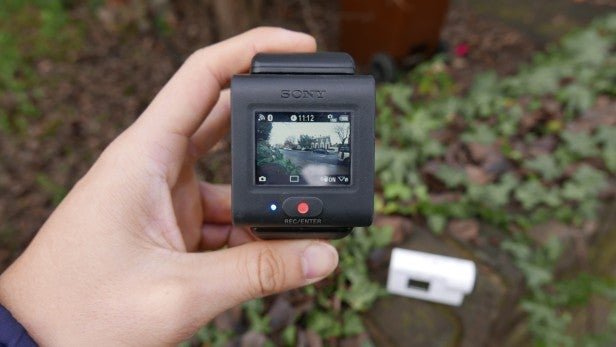 This may not sound like much, but if you’re constantly powering on and powering off the camera, this time lapse adds up and can mean missing a photo or video opportunity. In addition, the Live-View Remote Control suffers poor viewing angles, which means a lot of re-angling to see anything. 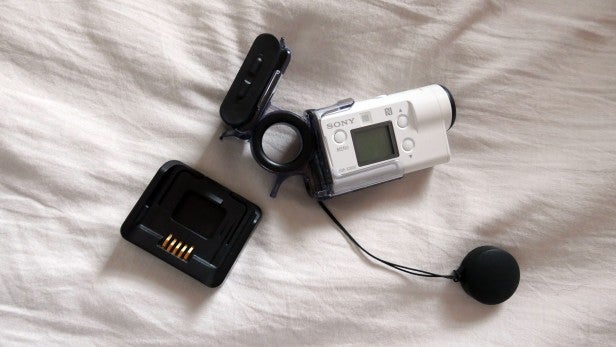 When it comes to the connections, there have been some small design tweaks. Where previous Action Cams had some connections on the bottom, next to the standard threaded tripod-mounting point, they’re now on the rear of the device. The former position made access difficult, especially if you were shooting a long time-lapse and wanted to keep the camera charged.

Tucked away on the back now is a micro-USB port for charging and transferring your footage. I’d have preferred USB Type-C for both the camera and remote control, which GoPro has just embraced with its new models.

There’s also a micro-HDMI output for connecting to a display, and a 3.5mm microphone connection if you want to use an external microphone for better audio capture.

For storage, you have the option of either Sony’s M2 memory sticks, or the much cheaper option of using a microSD card. Like always, due to the dual-storage format slot, it’s possible to insert a microSD card the wrong way round, so be sure to check before you attempt to start a once-in-a-lifetime recording to avoid disappointment. 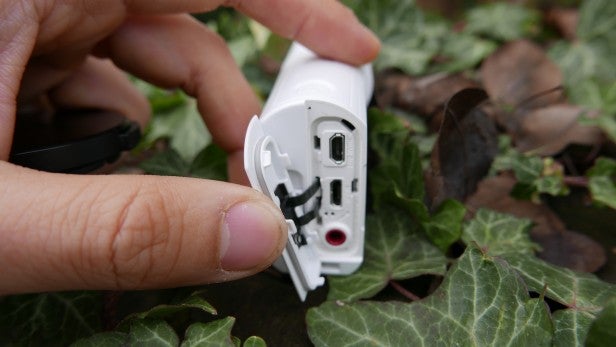 The FDR-X3000 is compatible with Sony’s PlayMemories mobile app for iOS and Android, and can pair with your smartphone over Wi-Fi. If you haven’t opted for the FDR-X3000R model, this is a decent alternative if you want a live view. There isn’t a great deal of lag between what’s captured by the camera’s sensor and what’s output on your phone.

You can also use the app to transfer images and video, although if you use Sony’s XAVC-S format, rather than MP4, you’re not able to transfer these videos across. 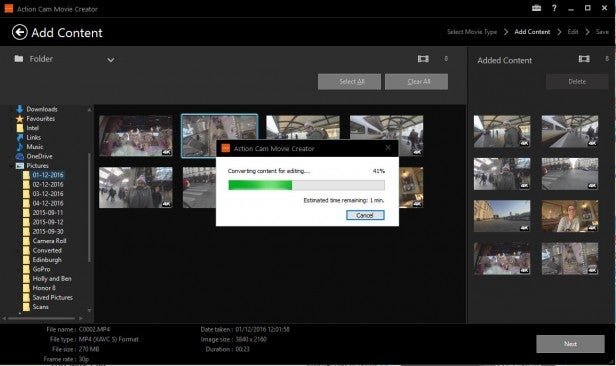 Sony has its Action Cam Movie Creator software available as a free download for desktops and I found this simple enough to use to trim and splice together footage into a basic video. You can see a few examples on the next page of videos edited using the software. 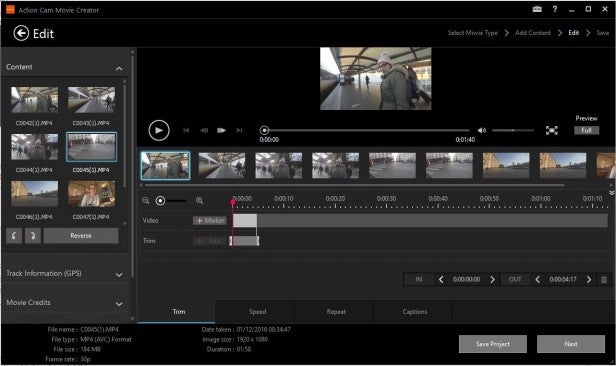 Since there’s a GPS sensor inside the FDR-X3000, you can overlay your footage with speed and route information captured along the way. A new speed log can display your speed over time, rather than simply showing your current speed. Time logs will also help those shooting with multiple cameras to edit their footage together.