At the core of many fighting games, there is a simple rock/paper/scissors mechanic that holds the basic aspects of the combat together. Attacks can be blocked, blocking can be thrown and if someone tries to throw an attacking player they’re going to get hit. Nintendo’s ARMS does a fantastic job of taking that core concept and building a game around it, but what most fighting games do is add a bit more depth.

For instance, most have low, high and overhead attacks that require you to be standing or crouching when you block in order to defend yourself or mix command grabs into the proceedings which are throws that will best a would-be attacker, so it’s not just a clear-cut ‘blocking stops attacks’. More options, and therefore, more opportunities for the mind games that make fighting games so much damn fun, but one of the reasons people find them so complicated.

Many have tried to strip the genre back and simplify things in recent years and SNK Heroines: Tag Team Frenzy has attempted to do the same thing with the popular ‘tag’ style fighting game. It has all of the hallmarks – characters you can switch in-and-out of the battle at will, air dashing, long and spectacular looking combos – but it is all performed with a simple button system.

You’ve got a light and heavy attack, a throw button (which can also be used in the air, a button to tag and one to block. Special moves are also all performed with one button, and by holding towards, away and down on the d-pad. That’s it. It’s dead simple. Too simple. 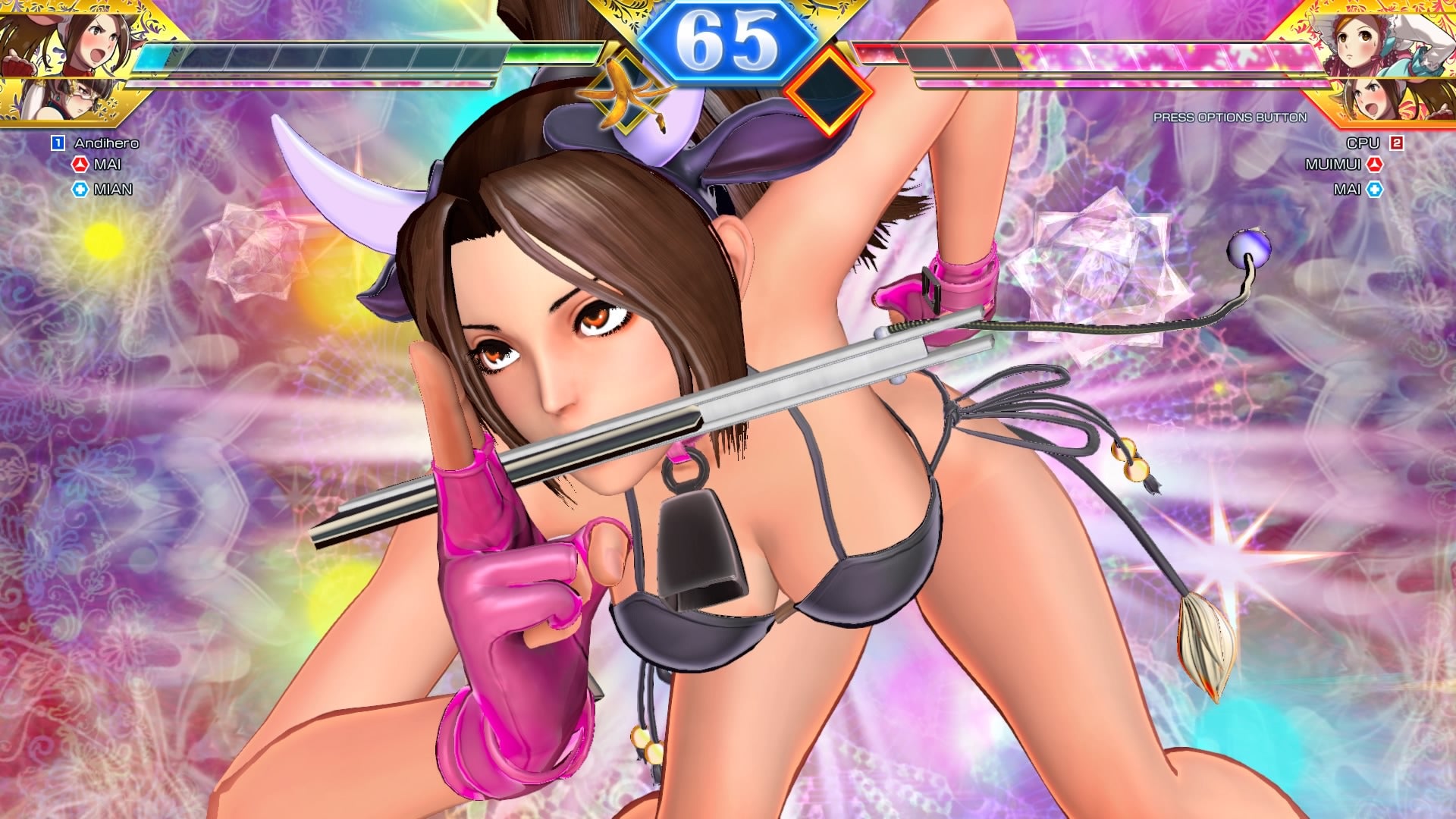 The problem with simplifying things to this degree is that, although the game is a breeze to pick up, you very quickly feel like you’ve seen it all and that there’s a real lack of variation within the roster. Almost all the combo routes are the same – four light attacks is a combo, two lights then a heavy attack will end with a hit that causes a wall bounce, these are constants, no matter what character.

Almost all of the special moves work in the same way, so down and the special move button is pretty much a universal ‘Dragon Punch’ style attack, neutral is usually a projectile, for instance. The special cancellable normal attacks all follow the same patterns. This leads to a roster that, although are very visually different, all kind of feel the same.

Simplification also means there are fewer options when approaching your opponent. In a tag battler, there’s a lot of smoke and mirrors provided by the assists and the constant movement and it’s all, at its core, about landing that one first hit of a combo and confirming it into as much damage as possible. So, you’re trying to catch your blocking opponent out, with air dashes to land jumping attacks on someone crouch blocking, or sneaking a low hit in on someone who wasn’t prepared for it.

In SNK Heroines, you can’t crouch. That entire aspect of the genre is gone, immediately. Your main goal is to just land a hit and you can only do that if they fail to block. Blocking too many attacks will cause the guard to break and allow you to get some hits in, but the opponent can also dodge left and right whilst holding down the block button, and that’s a big part of getting yourself out of trouble and starting to apply pressure of your own. Or, of course, if they’re blocking – hit the throw button, and so completes the aforementioned rock/paper/scissors mechanic. Without the subtleties, it’s all a bit one dimensional. 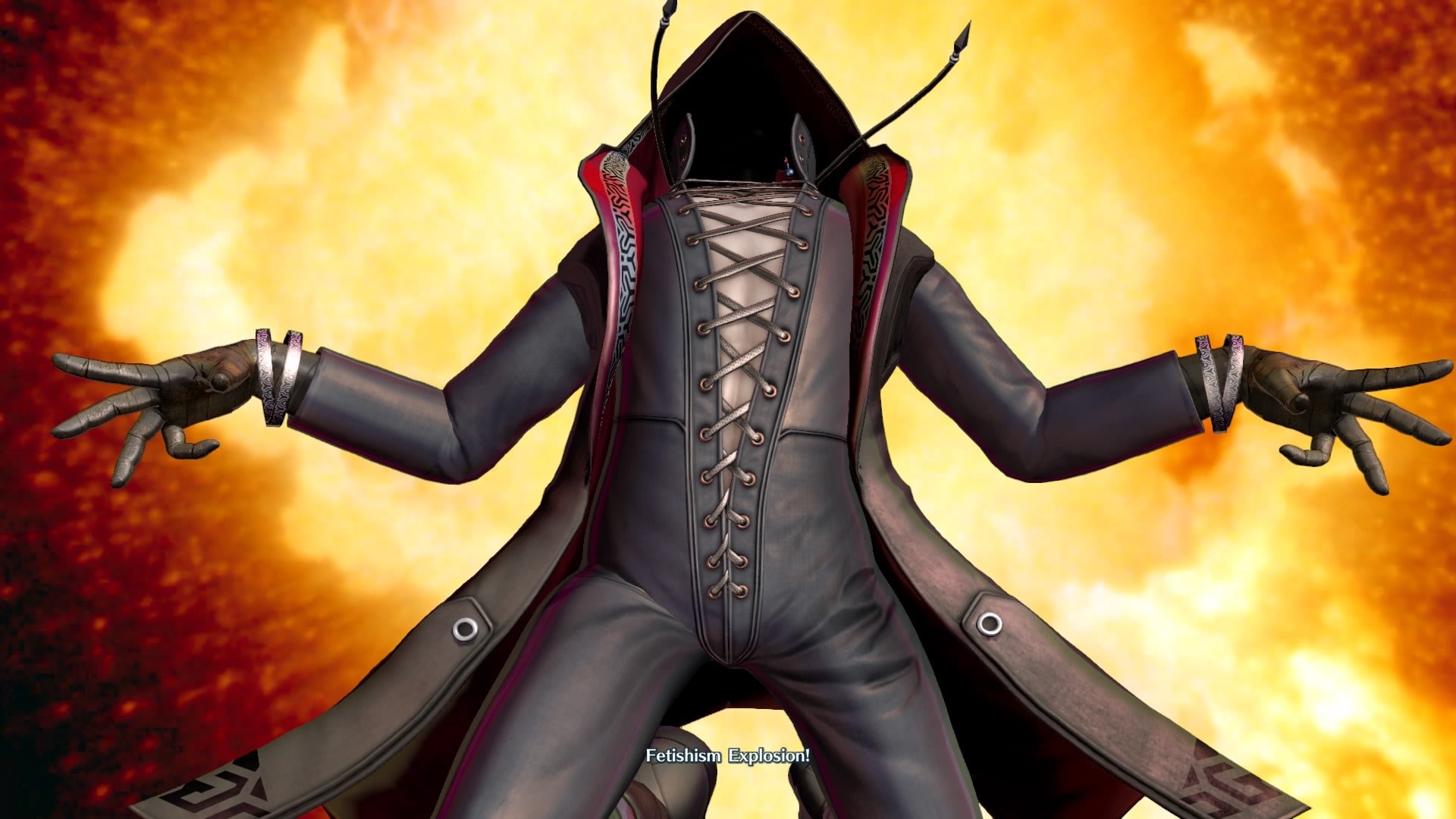 This doesn’t mean that it’s bad, mind. Because it is so simple to pick up it doesn’t take too long to start putting together some pretty cool, long combo strings that require tagging a partner in halfway through to continue the thing. Winning a fight isn’t as simple as reducing a health bar, although that’s part of it.

When your opponent has taken enough damage they’re put into a ‘Finish Chance’ state, and you have to hit them with a ‘Dream Finish’ to end the fight. This requires you to have a good chunk of the Spirit Gauge remaining, which depletes with special move use and some of the slightly more advanced stuff, like Tag Cancelling and Guard Cancelling, but recovers automatically, so there’s a bit of meter management and strategy required to actually finish the fight.

There are also items, which you gain randomly from balloons that appear during the match if you pop them with an attack. I know this sort of random element usually causes concern in fighting games, which strive to be -for the most part – as fair and balanced as possible, but here they bring a welcome bit of chaos to the otherwise quite repetitive scraps.

Some increase damage and stamina, but some are offensive or defensive tools. Tapping on the right stick brings them in from either side or the top of the screen, and with bombs that launch your opponent, banana skins that stick around until someone slips on them and even walls that can be put on the stage to keep the enemy from you or even to cause wall bounce combos mid-screen, they keep you thinking on your feet and looking to make the best of any opportunity they give you. 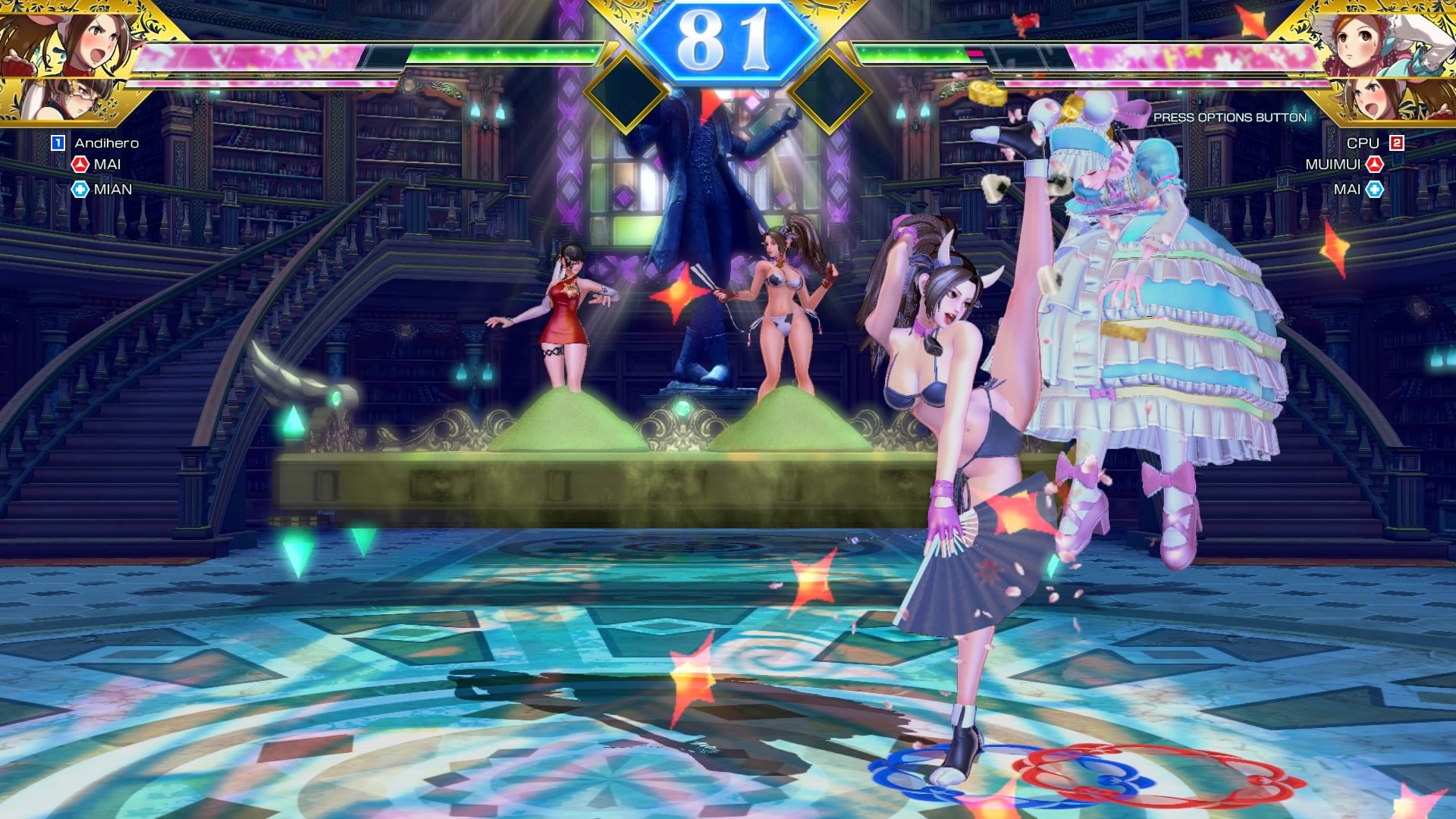 It allows for more interesting fights, throwing a few curveballs into the mix and bringing some much-needed excitement into the otherwise simplistic affair. It’s so simplistic, you can probably play it one-handed, which might actually be the whole bloody point…

If it wasn’t completely clear from any of the artwork released about the game, SNK Heroines contains a lot of what anime fans refer to as fan service, and what the rest of us refer to as ‘somewhat embarrassing semi-naked cartoon characters’. The plot, which casts King of the Fighters 14 newcomer Kukri as – and I am not making this up – a perverted overlord of a dimension that pulls in a load of the female fighters from across SNK’s various games so he can turn them into sand statues for his – and again, I am not making this up – ‘fetishism explosion’.

Predictably, he’s got cameras set up all over the place and between fights, you get to watch the cartoon women flaunt their stuff in some candid shots. How very Dead or Alive: Xtreme Beach Volleyball. At least that was a pretty fun volleyball game with some interesting friendship mechanics backing up all of the blatant titillation.

And I must stress here before anyone out there points the finger and claims that this is some kind of ‘conspiracy’ towards cartoon titty games – the game is painfully average regardless of what you think about the content. You could be the wildest masturbator of all-time, finding it almost impossible to keep it in your pants at the mere suggestion of a panty shot from a reasonably well-animated 3D model, and you’re still going to find this a bit lacking in the gameplay department – if that’s what you’re even buying it for in the first place. 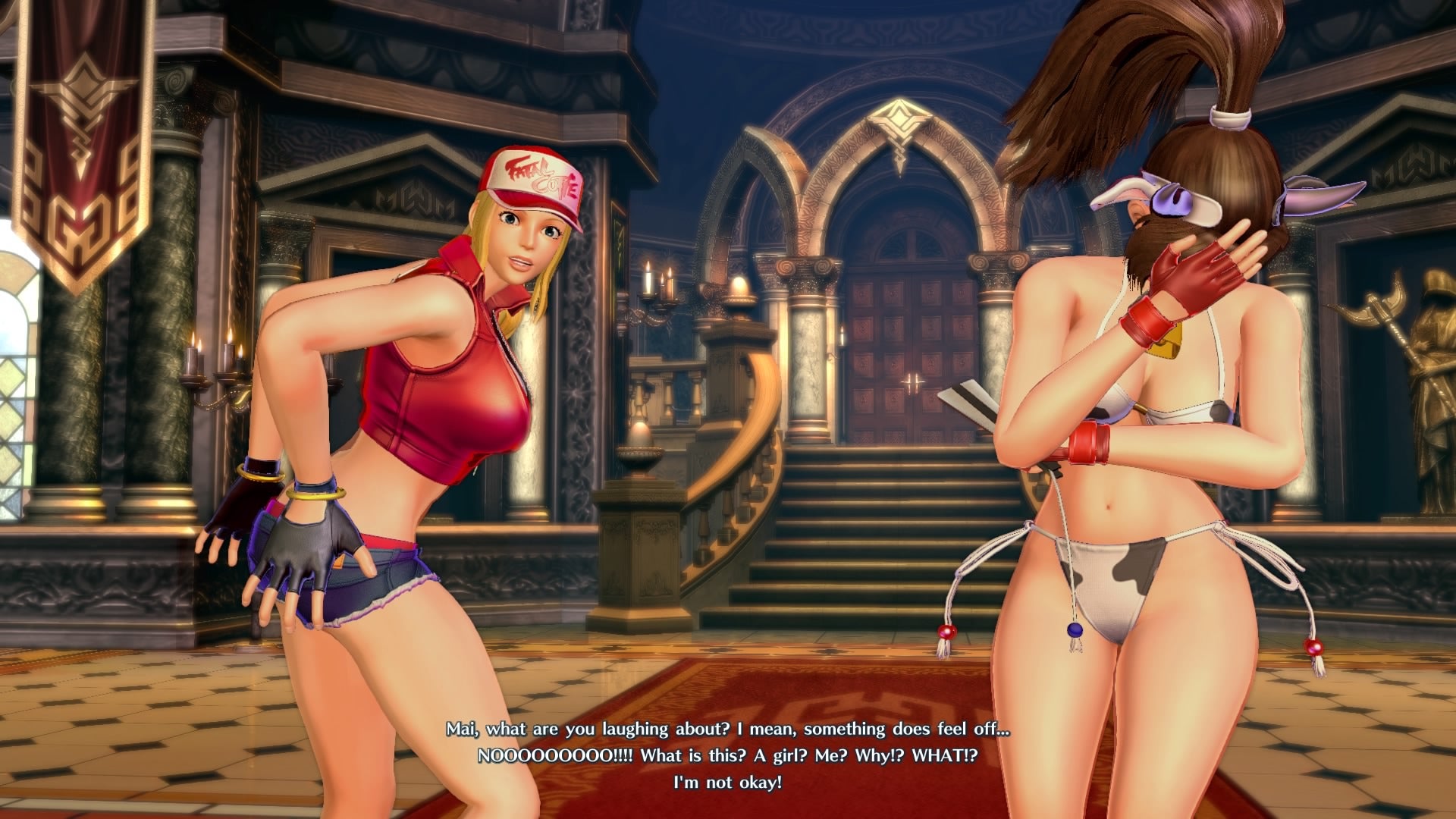 The package is also woefully slim pickings. Although the story mode has lots of different cutscenes to see, based on which pairing of girls you’ve selected, it’s pretty short and outside of that you’ve got the usual versus, survival, an arcade ladder, and training modes and that’s about it for the offline player.

Online has quick match and lobby modes and in the handful of matches we’ve managed to play seem pretty stable (on PS4, we were unable to test the Switch version). Playing these gets you coins that you can spend on a whole load of costume customizations and this is where the meat of the game lies. There’s a LOT of cosmetic stuff to purchase, with a few items being some awesome SNK fighter history deep cuts, but that’s about all there is to this.

It begs the question who exactly SNK Heroines is for? The hardcore fighting game fans aren’t going to find enough here to pull them away from Dragon Ball FighterZ or Tekken 7 and yet, they’re the ones who are going to appreciate the references to SNK’s arcade history throughout.

It’s fun for a bit but quickly runs out of steam. The more casual fan, looking for something to have a laugh with their mates with and little else is almost certainly going to be better served by hanging on for Nintendo’s new Smash Bros game because there’s simply not enough interesting content outside of unlocking clothing accessories.

So, I guess it’s for people who fancy seeing their favourite anime looking lass in various states of semi-undress have a bit of a fight with somewhat unrewarding mechanics. If that sounds like you, fill your boots.