What is the Skagen Connected?

Skagen is known for its slim and refined mid-range watches with a unique Scandi style, which is why it’s slightly odd that the brand (now owned by Fossil Group) has moved into the world of chunky connected timepieces.

Its Connected watches come in a variety of styles including the Hagen and the Signatur in a couple of different sizes, but they all run on the same software, with the same app and tracking capabilities. In addition, other Fossil brands featuring the same hybrid functionality include Michael Kors, Kate Spade, Armani and Fossil itself.

These are undoubtedly the most stylish screenless smartwatches around. The main consideration is whether the fairly limited feature set of step counting, sleep tracking and vibration notifications is enough to justify adding between £80-£100 to the asking price, and some added thickness, to a standard Skagen watch. 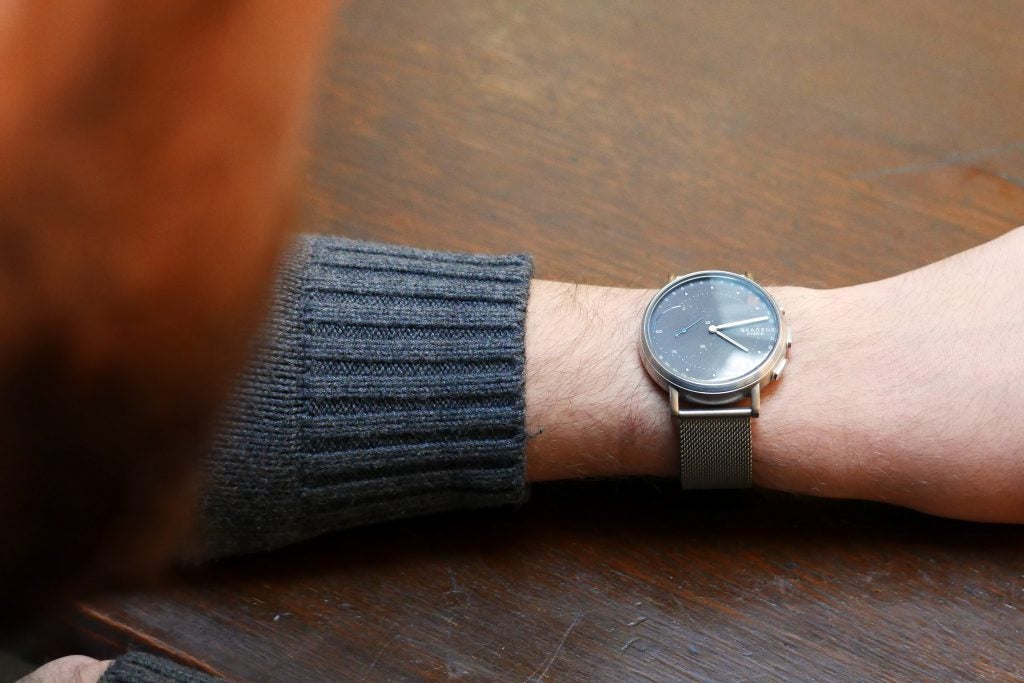 My test piece was the 42mm Signatur, with its Steel-Mesh design. From the front it looks great, although practically speaking, it’s a little confusing. There is a series of 31 numbers around the outside edge corresponding with the days of the month, eight dots to signify the hours of the day, plus a subdial that keeps track of your daily step goal.

Inside, you get a Bluetooth 4.1 chip that connects to your phone, a vibration motor for notifications and alarms, and a gyroscope for step counting and sleep tracking. There’s a standard replaceable watch battery that’ll last up to a year, depending on your usage, too. The hands aren’t moved by a standard watch mechanism; instead they move independently, depending on what’s needed. Most of the time they’ll display the time like a normal watch, but when required, they can spin around to relay basic notifications. 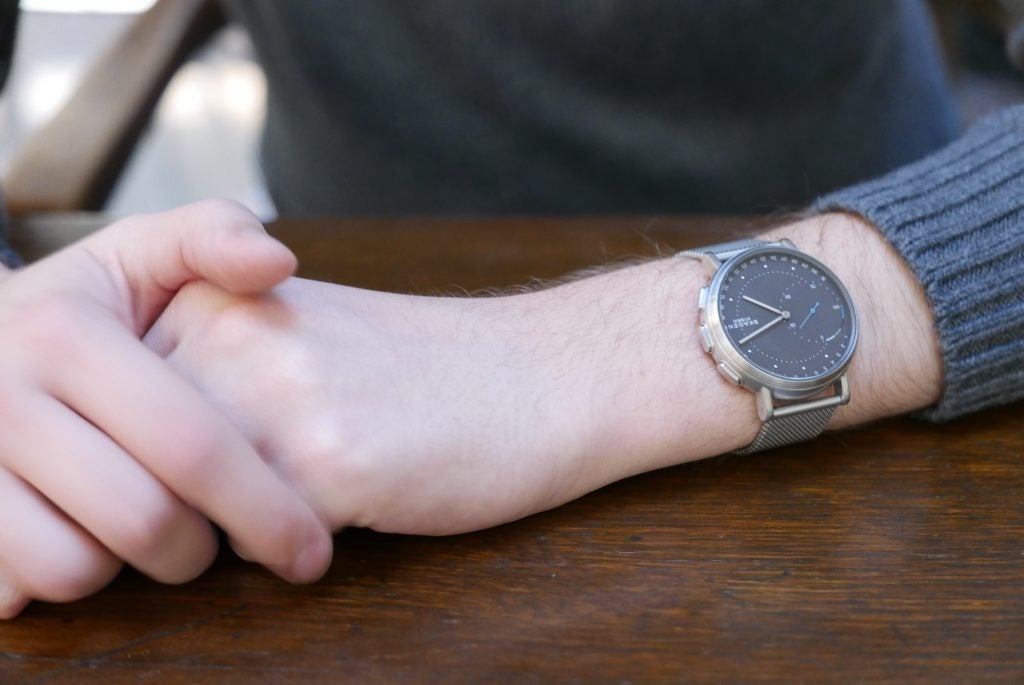 Other models have more simple faces: the Hald, for example, ditches the step counting complication, and your step goal can instead be seen by pressing one of the side buttons, with the watch hands flicking round to the corresponding percentage number.

The model on review is a chunky piece of kit, measuring in at 12.5mm thick. That’s big for a mid-range watch, and positively huge for a Skagen. The thickness is a surprise considering there’s no added tech like a heart rate monitor to really justify it. Throughout my time with the watch, I had several comments about its chunky design – none of them positive. 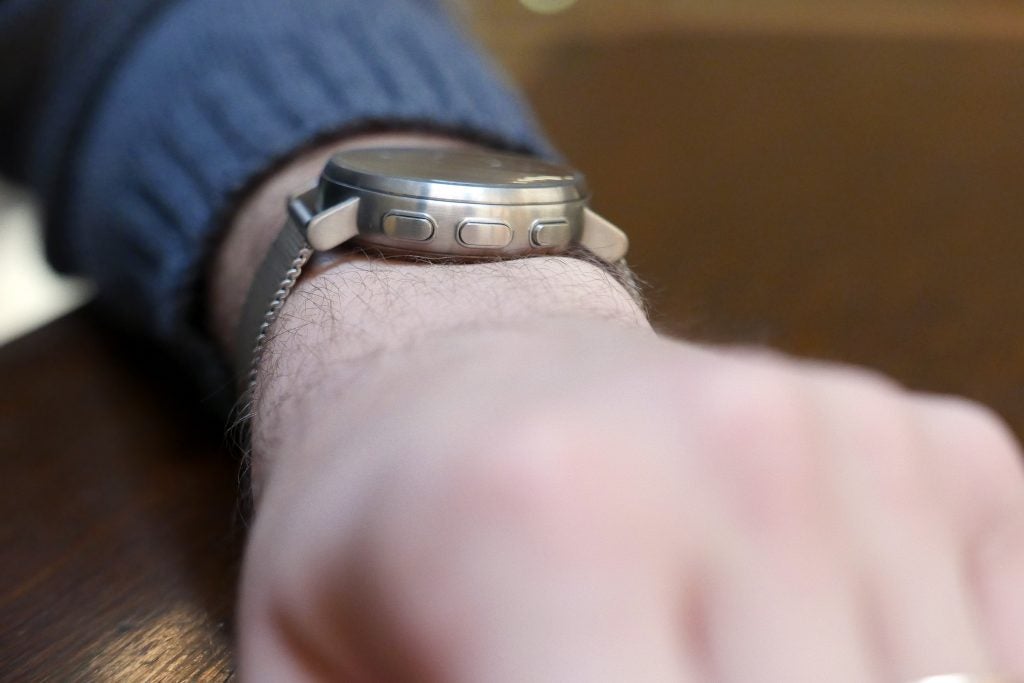 I became used to its 100g weight and relative thickness, but it’s certainly not something everyone will appreciate.

The strap uses a standard Milanese size adjustment mechanism. That is to say, it’s fiendishly difficult without a solid piece of metal to jam into the mechanism to adjust it, something you’ll have to do multiple times if you’re a bit clumsy and don’t get it right first time.

The Skagen Connected is easy to set up. Simply install the app, follow the simple instructions, and you’ll be up and running in minutes (depending on software updates).

In the app, you can set up your step and sleep goals, customise what each of the buttons do, and set silent alarms. You can also set the watch to vibrate when certain apps fire notifications. 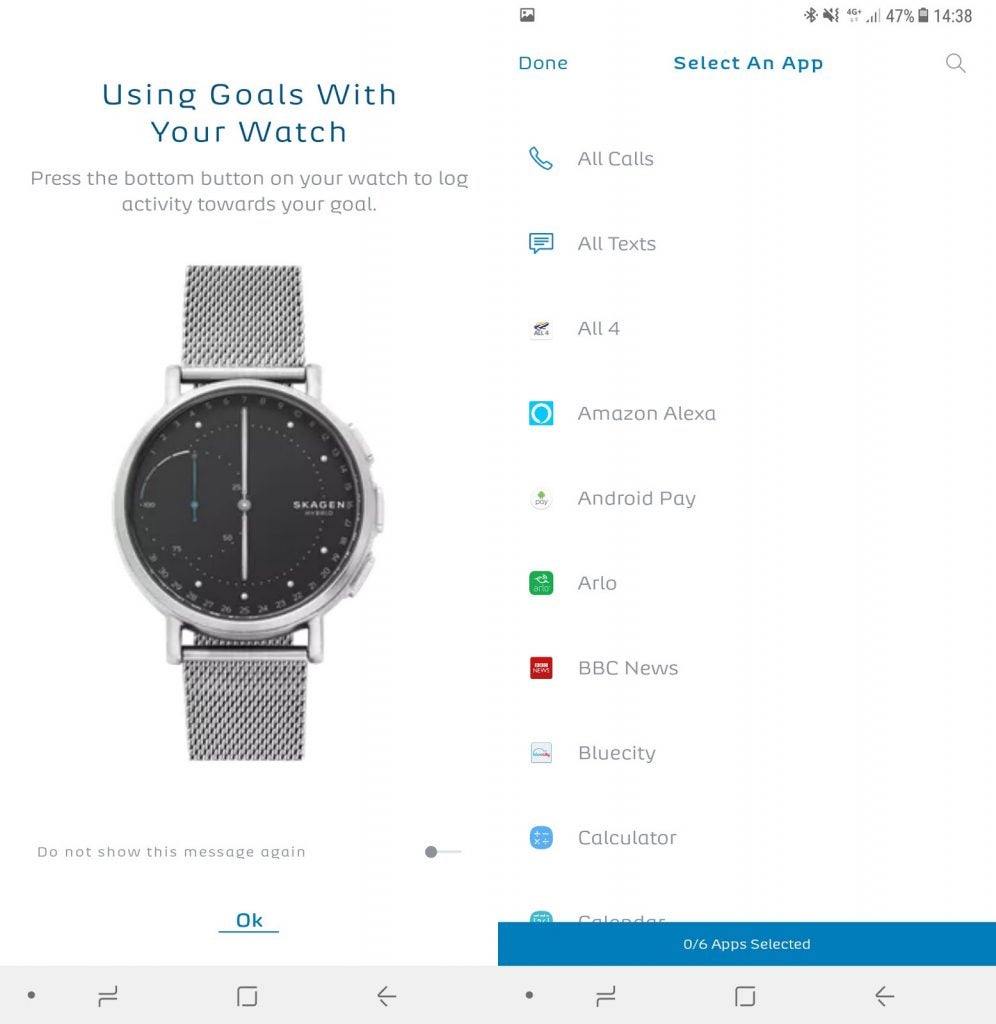 The app presents graphs on how you’ve met (or failed to meet) your daily step goal, with daily and weekly charts that compare each week with the previous week. It does seem to rather exaggerate how many steps you’ve done; 21,000 steps on a Sunday equated to around 20km of walking according to the app, neither of which could possibly be true, despite the fairly long walk I’d taken that day. My generous estimates put my distance at more like 10km.

It seems the app thinks I was taking a run for much of that day. It put down roughly a third of my activity as ‘intense’, despite my walk being moderate at most. It is at least consistent though: I did another 19,000 steps the next Sunday, with around the same distance and apparently the same amount of intense activity. 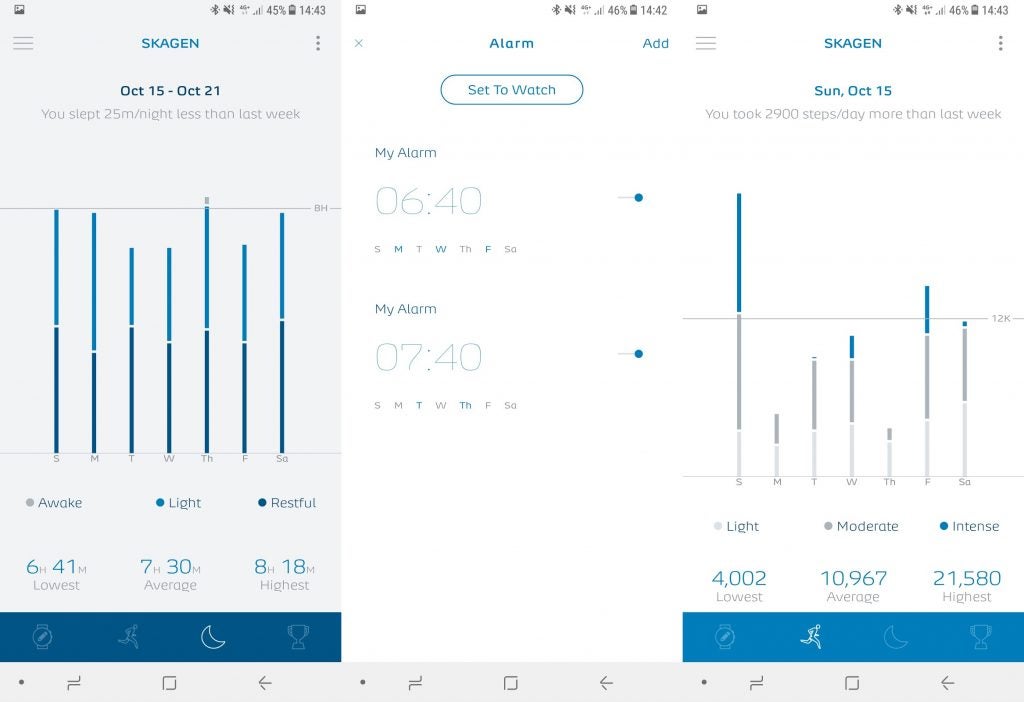 I generally forgive step counters. They’re far too basic a measurement to truly tell you anything about distance and calories, or even the number of steps you’ve done. Step counts as a whole are a flawed way of properly keeping track of your fitness levels, after all.

However, as long as they’re consistent, which the Skagen’s seems to be, they’re useful in gauging how good you are at getting up and being active. You should know yourself roughly how much walking you feel like doing, so an app giving you some extra motivation is no bad thing.

Sleep tracking at least seems to be more accurate. The app gives you a breakdown of how much light and restful sleep you’ve been getting, and its findings generally matched my bedtime and waking habits.

The other ‘smart’ side of this watch its its ability to vibrate and show notifications. If I’m honest, this is my least favourite feature, given the watch can never possibly give enough information to let me decide whether it’s worth pulling my phone out of my pocket. You can set up the watch hands to point at a specific numeral (or dot in this case) to signify what app or contact is messaging you. Problem is, you can’t do it on a per-contact basis in apps like WhatsApp or Facebook Messenger, so it only really works with SMS, your phone’s built-in email app, and incoming calls. Otherwise, you get every notification from a given app. If you have an overly active WhatsApp group, this quickly becomes tiresome. 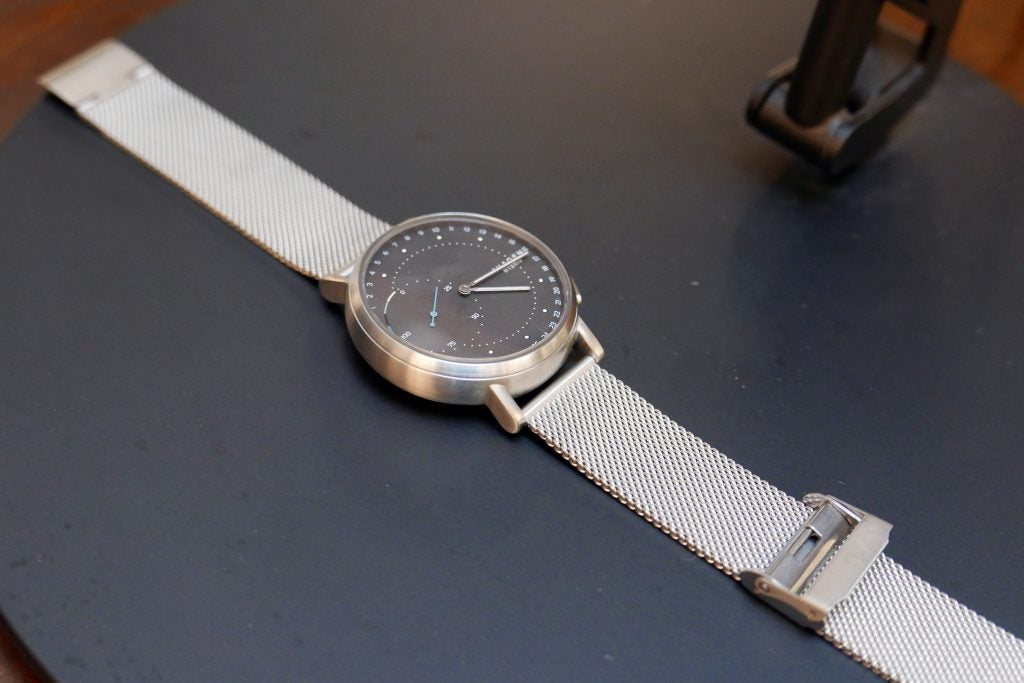 The only notification I kept on was for phone calls, because I often keep my phone on silent at work and so miss almost every call I receive. I also turned on silent alarms to wake me up in the morning, but even at its strongest setting the alarm, was only successful half the time.

The three buttons on the side of the watch can be set to perform a variety of functions. The most useful is ‘media playback’, which lets you skip, rewind or pause whatever media is currently playing – all with a single button. There’s also a ‘find my phone’ function, which plays your phone’s alarm if you’ve lost it somewhere in your house.

You can also set a button to add a custom activity. For example, you could set a target of drinking water 10 times per day and tap the button each time you chug a glass of H2O. Again, not groundbreaking, but useful for some. 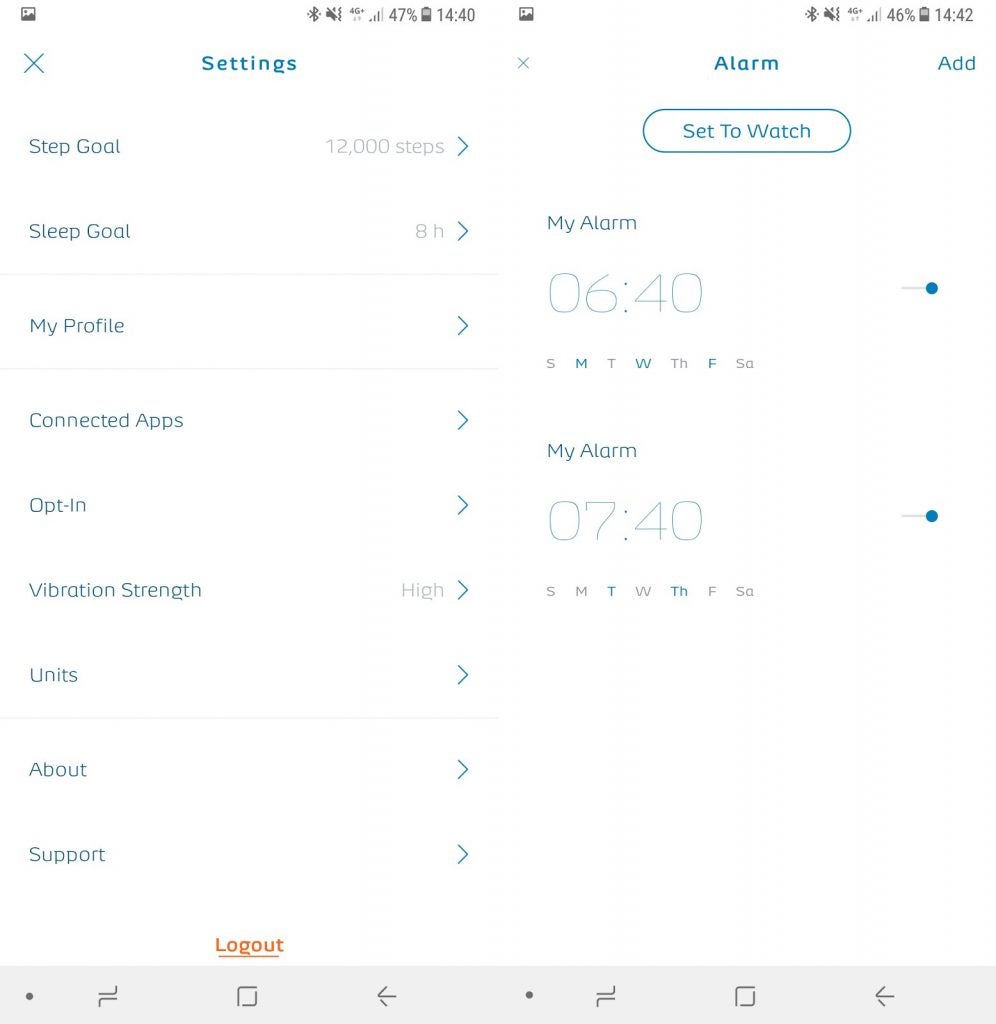 Other functions include the hands sliding around to show you what day of the month it is, the ability to take a photo remotely, and also switch your watch over to a second timezone – useful if you’re away and you want to check what time it is at home (the watch automatically sets its time to whatever timezone your phone is in).

Should I buy a Skagen Connected watch? 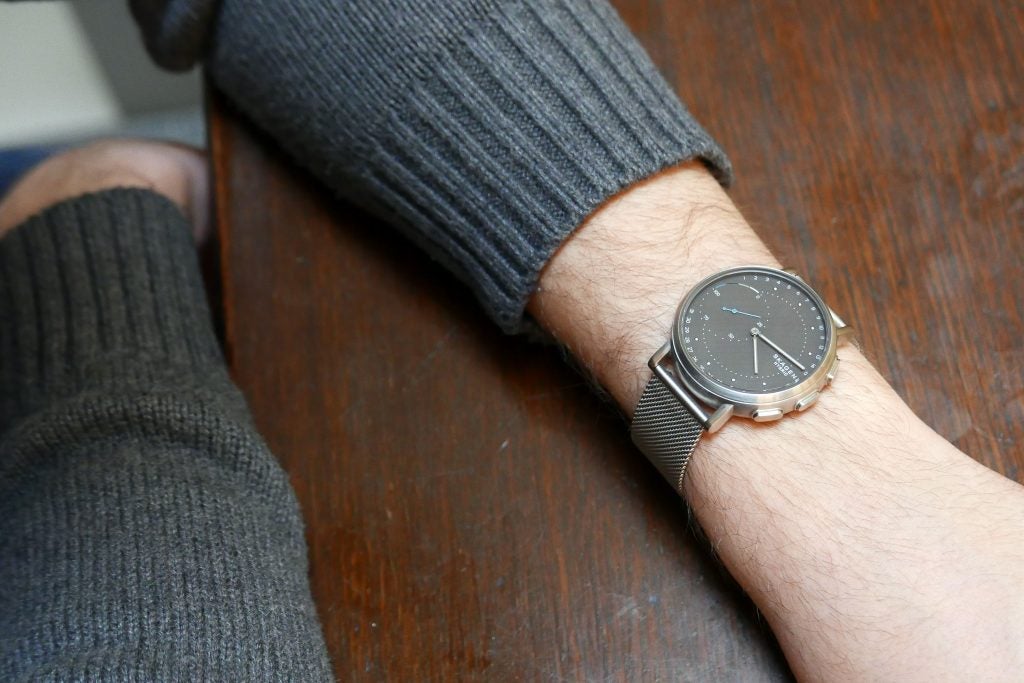 One of the best things about traditional Skagen-brand watches is how low-profile they are, which is something the Connected versions completely do away with. That, combined with a relatively simple feature set and notifications, and an elevated price means these Connected watches won’t be for everyone.

There’s no one big reason not to buy a Skagen Connected, or indeed any other Connected Fossil Group watch, but just consider whether you actually need the features being offered. I’m not sure I’d miss them if they were gone.

Consider the Withings Steel HR, which has a built-in heart rate monitor and a small LCD screen for slightly more detailed notifications, albeit with a substantially less stylish design.

Stylish, but not essential.