Although in the current landscape the underlying Wear OS-based recipe remains relatively unchanged from one smartwatch to the next. The American fashion house has dressed this wearable in its own style and bundled a few unique software experiences that reflect the brand’s image.

Starting at £349, you’re undoubtedly paying a premium for the name. However, if you’re looking for a stylish smartwatch to accompany a fashion-forward outfit, this might be worth considering.

The Grayson, as with the Sofia line that launched alongside it, is a steel-bodied smartwatch that comes in a myriad of finishes. I sported the rather eye-catching ‘Blue-tone’ option (arguably, the most exciting), but it’s also available in more conventional all-silver or all-gold finishes. There’s also a colourway with black accents running down the centre of the strap.

The linked metal band fitted to the watch out of the box is sizeable, to say the least, but Michael Kors throws in two spare links, should you need to expand the strap further. My relatively dainty wrists actually required the removal of four links to ensure the watch didn’t slip onto the floor the moment I dropped my arm. 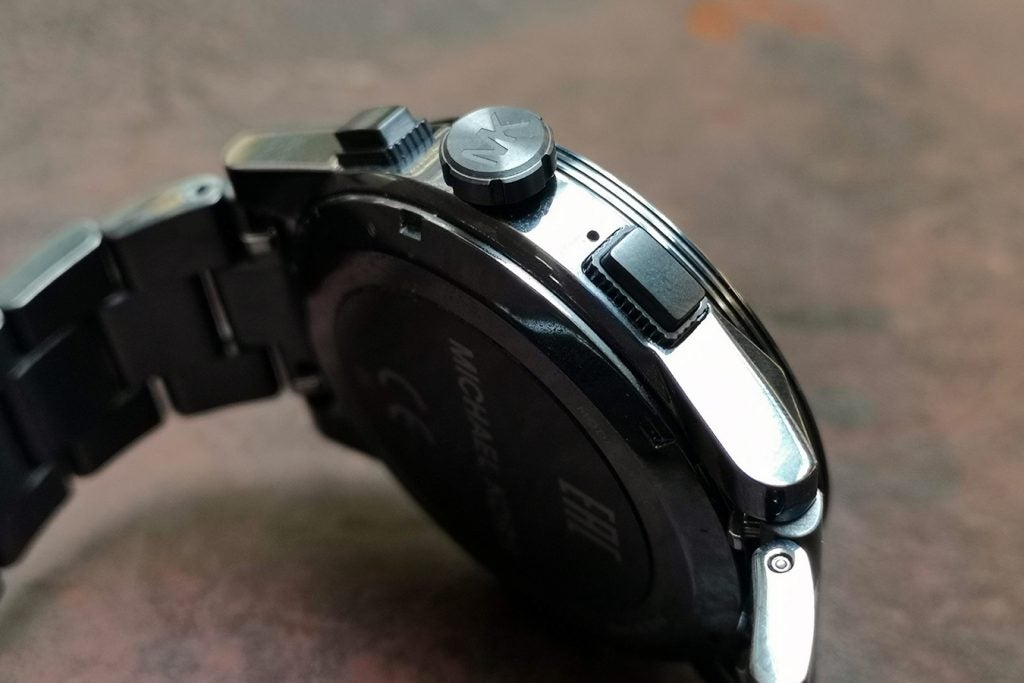 A linked band does also mean you’ll need tools to knock out the tiny link pins (which, in a nice demonstration of attention to detail, are coloured at each end to match the finish of the watch), should you wish to shorten or lengthen it. This is something you can attempt yourself if you have the tools, or you may prefer to pay a jeweller to do it for you.

The strap opens and closes via a shortened push-button deployment clasp, which closes with a satisfying ‘click’ and feels reassuringly secure when worn. The small exposed outer face of the clasp bears the Michael Kors name.

As for the body of the watch itself, the design is based on the same 47mm chassis seen on the analogue-faced hybrid Michael Kors Grayson watch. It sits high on the wrist with a depth of 13mm, with strong lines that give it a defined, almost industrial look.

The brushed finish that covers practically every metal surface on the watch creates some beautiful anisotropic reflections, which dance around as you tilt your wrist. The smaller areas of polished metal make for a nice contrasting finish.

The outer face of the protruding bezel appears to have been pattern milled, while the two hardware buttons either side of the watch’s crown sit within scalloped surrounds. These elements add interest and texture, suggesting that real thought has gone into achieving the look of the Grayson. 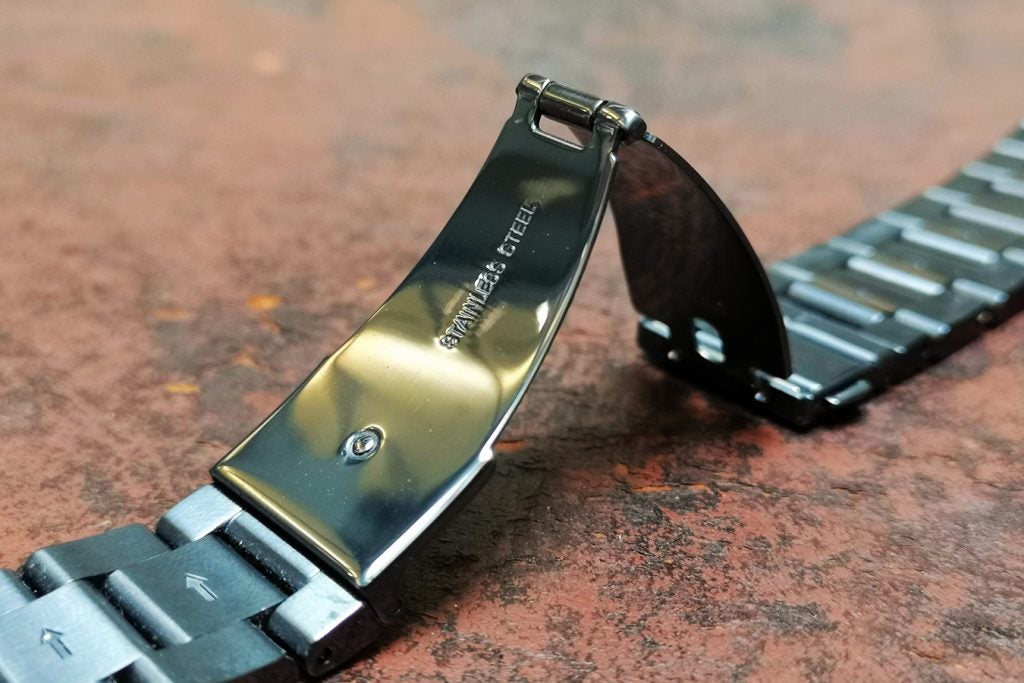 From a more practical standpoint, I’m always pleased to see manufacturers making use of Wear OS’s support for rotational input. The ‘MK’ monogrammed crown does indeed twist to accommodate this interaction; whether the software you’re currently using supports the feature is another matter. IP67 certification is also included, meaning this watch isn’t only stylish, but hardy too.

Flipping the Grayson over, I was impressed to find dual quick-release springs, which make removing the strap or swapping it out for another, similarly sized 24mm option a doddle. All of the Grayson smartwatches come with a metal band, but the company does also offer a number of colourful silicon alternatives if that’s more your style.

If I had to criticise the aesthetics of the Grayson then it would be that the metal body, with those precise lines and crisp edges, is susceptible to damage. I wore the Grayson consistently for a couple of weeks, and during that time I did briefly catch the edge of the casing, which took out a tiny chunk of the metal bezel with it. If you plan on wearing the Michael Kors Access every day, be prepared to see signs of wear and tear fairly early. 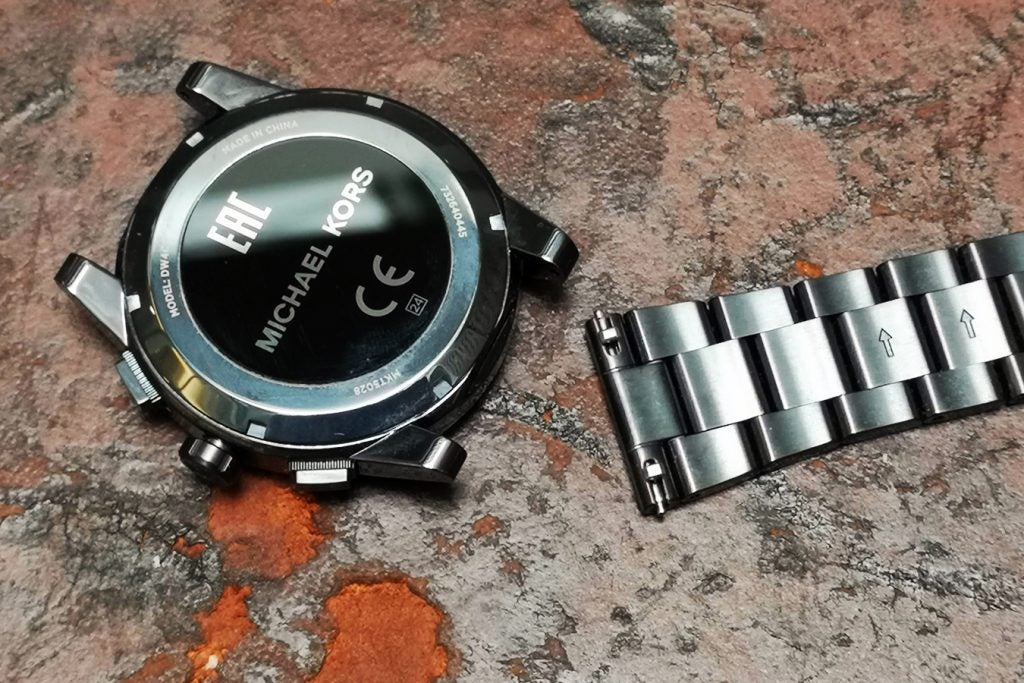 Considering the level of thought and polish applied to the Grayson’s design, the charging mechanism feels like an afterthought. Since this smartwatch is one of many manufacturers by the Fossil Group, it uses the same cheap-looking white wireless charging cable.

The red LED power indicator built into the USB end of the lead is appreciated, but the weak magnetic connection at the inductive end means misalignment is a real risk. As such, it’s possible to incorrectly connect the Grayson so that it doesn’t charge, or nudge the lead slightly and disconnect the charging pad all too easily.

I’d have preferred a more robust contact-based solution like that seen on the TicWatch Pro’s charger, or a stronger magnet such as the one used by the Apple Watch.

One of the big failings of the original Michael Kors Access line was the lacklustre, washed-out display. By comparison, the sharper AMOLED panel on the Grayson is a marked improvement in every sense.

For a start, the flat-tyre design is no more, with a fully circular 454 x 454 resolution panel that renders the Grayson’s front decidedly more watch-like. That bump in resolution, plus the fact that it’s fractionally smaller than the Access Bradshaw’s face at 1.39 inches, also means that text and on-screen elements are wonderfully crisp and clear.

Like most full-blown smartwatches, the Grayson’s display does struggle to remain visible in bright sunlight, but in other conditions, it’s easy enough to read. The option of automated brightness also serves to make glancing at the watch in darker environs a less painful affair, whilst colour and overall brightness only take a hit at more extreme viewing angles.

By default, tilt-to-wake activates the Grayson to present you with the time or an unread notification. However, as is the case with every other Wear OS-powered smartwatch, when you twist your wrist to bring the watch face into view, you’re left waiting fractionally too long for info.

The alternative solution is to switch on Wear OS’s native always-on functionality, which solves the wake-time issue but increases battery drain. The low-brightness monochrome always-on watch faces are also much harder to read in bright environments.