Microsoft has secured the talents of PlatinumGames’ Hideki Kamiya for this Xbox One-exclusive Japanese Role Playing Game (JRPG), and we got a first look at it at Gamescom 2015.

Scalebound was revealed, we didn’t really get a feel for what it actually was. We knew from the trailer that it would feature a dragon, and the Hideki Kamiya and PlatinumGames credit meant that we assumed it would be feature lots of action. However, it’s actually a JRPG, with many of the tropes we’d expect from a game in the Final Fantasy universe. 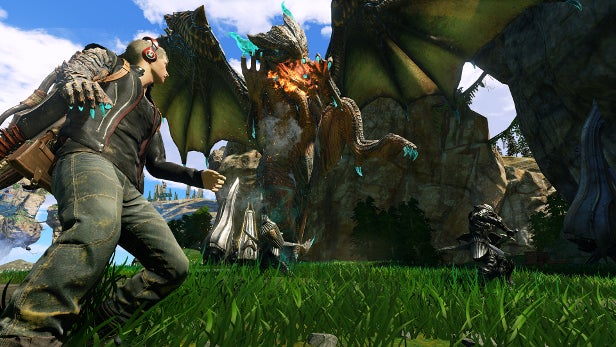 You play as the rather generically-named lead character of Drew, a teenager with an attitude that’s most obviously signposted through his Beats-like headphones. He’s not that far removed from Ninja Theory’s Dante from DmC: Devil May Cry, which fanboys got so up in arms about a few years ago. In Scalebound, Drew gets transported from our world to the world of Draconis, where he becomes organically connected with a dragon called Thuban, although how and why these events happen isn’t clear.

The entire focus of the Gamescom demo of Scalebound was on combat, offering the tantalising prospect of seeing what the creator of Bayonetta can do within the JRPG genre. Drew is equipped with a sword to take on enemies in real-time, but he’s also able to command Thuban to perform actions like attack and defend. Draconis and its inhabitants are linked by an energy source known as The Pulse. Drew is able to command this energy via his dragon-scale arm – firing energy shots on command. 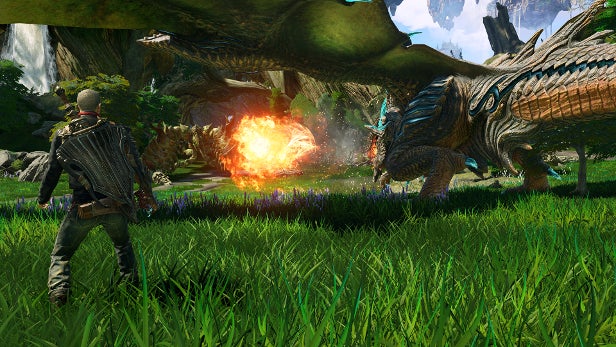 The combat looks like it will incorporate the over-the-top action that Kamiya is famed for from games like Bayonetta, albeit with more dragons. We saw a dragon fight where Drew was able to use a hook shot to attach himself to the enemy dragon to land melee shots with his sword. There’s also depth to the combat – the more you use a weapon, the more it endures wear and tear, meaning you’ll eventually have to upgrade or replace it.

You might ask why you’d need to use Drew when he has an all-powerful dragon at his disposal, but this imbalance in power is addressed by a simple mechanic. If you use your dragon too much, he might incinerate the enemies and their bodies so you don’t get to retrieve gems, which you might need, so you might tell him to hold back if you want gems. These gems can then be spent on evolution options for Thuban, including different skins, a new type of breath (ice instead of fire, for example), or armour. Drew, meanwhile, will be able to purchase those ridiculously big swords that are a mainstay of Japanese games and manga. 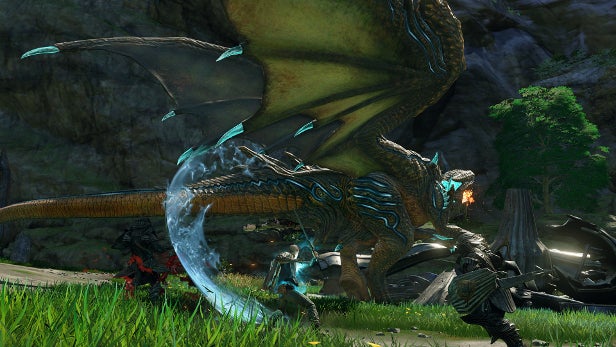 Combat may have been the focus for Scalebound’s first ever gameplay demonstration, but our session ended with a video showing some of the other activities in the finished game. Beautiful villages scatter the massive open world, and it’s here that you’ll be able to meet new characters, buy and sell goods and go on quests. This part of the game is still mainly under wraps – Kamiya wouldn’t be drawn on whether there would be dialogue trees or not, just that there would be one main story (rather than several) forming the narrative backbone of the game.

The final part of the Scalebound package is four-player co-op, which was teased in the form of a video of Kamiya buddying up with Microsoft’s Phil Spencer to summon dragons together. It’s not clear how this will work – it appeared as though certain dungeons would be playable in co-op, but it wasn’t clear whether the whole game was playable in this way. When questioned about competitive multiplayer, a Microsoft representative said that they weren’t talking about that at this point, leaving room for the possibility of an announcement in future.

First Impressions
Scalebound is still in a pretty early state, but the work that’s been done so far is stunning, and will definitely appeal to JRPG enthusiasts. The world of Draconis is green and luscious, Thuban is huge but beautifully detailed, and the towns that we’re given a glimpse at look to be bustling with life.

Scalebound doesn’t have a release date as yet, although we wouldn’t expect to see it before next year, and it will be released as an Xbox One exclusive.