DmC is everything that Capcom fans should dread. It’s a reboot of a beloved franchise with the hero transformed beyond all recognition, and one that’s been tackled by an external, Western developer. Bearing in mind Capcom’s previous experiments with Western teams – Resident Evil: Outbreak, Bionic Commando and the diabolical Dark Void spring to mind – that’s reason enough to fear the worst. Yet DmC is a triumph, not simply as good as the old Devil May Cry games but arguably better.  It’s taken the best of the series and twisted it into bold new forms, yet without sacrificing the overall spirit. 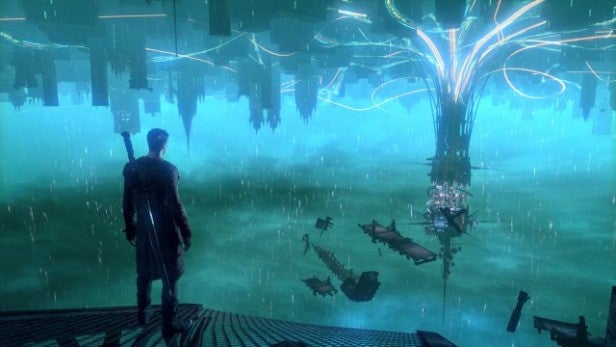 Let’s heap some praise on Ninja Theory – the studio behind Heavenly Sword and Enslaved: Odyssey to the West. With DmC, it’s built a beautiful hybrid of its own styles and those of Capcom. You can see traces of the studio’s previous work in the visual design and the approach to storytelling, but also Capcom’s signature in the creature design, the combat and the game systems. The result is a game with one foot in the East and one foot in the West, but its heart and soul in exactly the right place.

Being a reboot, we’re back to the drawing board in terms of Dante and his world. The louche, silver-maned rake of Devil May Cry 1 to 4 is no longer, replaced by a young, cocky street punk in vest, jeans and leather parker. Dante’s brother and rival, Vergil, is now the head of a mysterious terrorist organisation, and the whole origin story of Dante’s demon father, Sparda, and angle mother, Eva, is subtly rewritten. In other respects, DmC reworks the plot of the first Devil May Cry, pitting Dante against the demon king Mundus, now the head of a shadowy organisation that secretly rules the world. From a storming opening with a running battle against a huge demonic hunter, the plot follows Dante as he explores his past, attacks Mundus’s network and takes the fight to the boss devil himself. 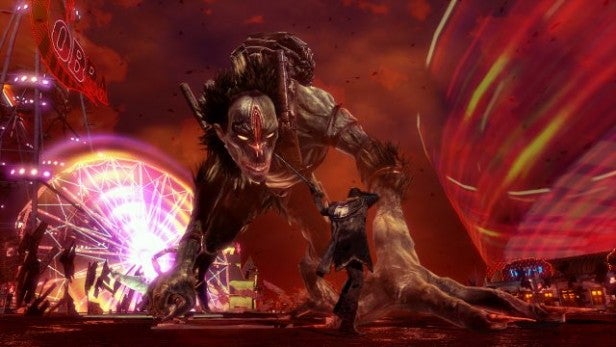 In terms of gameplay, DmC sits in the tradition of third-person 3D action epics that the original Devil May Cry helped invent; a tradition that now also includes God of War, Ninja Gaiden and Bayonetta. The reboot plays true to its forbears by mixing ranged weapons like pistols and shotguns with melee weapons like swords, axes and scythes, and by going big – no, make that huge – on spectacular combos. Barely a second goes by without Dante hoisting foes off the ground, flinging them into the air and juggling them with gunfire or brutal uppercut attacks to maximise the damage as they fall. Many of the enemies fit into familiar archetypes, and the new DmC has the same kind of battles against vast and repellent boss monsters as its predecessors. Dante might have changed, but the core content hasn’t.

Yet DmC does bring new things to the series. Dante’s main weapons remain his sword, Rebellion, and pistols, Ebony and Ivory, but as he progresses through the game he gains access to two series of supplementary weapons, reflecting his half-angel, half-devil nature. Not only do these give you a range of options for tackling specific demon enemies, but also open up an already very expansive combo system with attacks that drag foes into slashing range or launch you towards them. Cleverly, these secondary weapons can be used instantly by using the left and right triggers as modifiers, making it easy to integrate their attacks into vicious combo chains, or switch arms while tackling different enemies at once. Finally, the game throws in the classic Devil Trigger, with a gauge for Dante to fill by slaying demons, which gives him power to enter a heavy-hitting, health-regenerating devil mode – always handy when you have a room of hell-spawned hardnuts to clear. 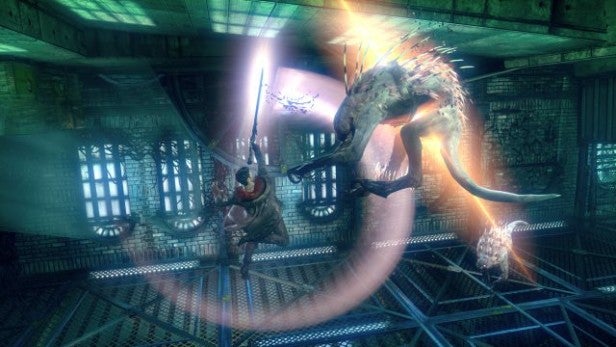 Combat is the bleeding heart and soul of DmC, and it’s brilliant. It might not have the heft and rhythm of the fighting in God of War, but it matches Bayonetta’s system for fluidity and grace, and each encounter brings new challenges and opportunities to try new combos. Heavenly Sword and Enslaved had decent action, but Ninja Theory’s interpretation of Capcom’s combat is easily its best work to date.