If our involuntary response to clapping eyes on the UE65JS9500’s pictures for the first time was “wow”, with the UE78JS9500 it has to be WOW.

We started our tests with HDR UHD clips of The Life Of Pi and Exodus supplied by Samsung on a USB stick. And the sight of the JS9500 series’ spectacularly rich colours, massively dynamic contrast range, unprecedentedly intense brightness and gorgeous UHD splashed across a screen as enormous as 78 inches is a vision we won’t forget in a hurry. In fact, we’ve genuinely never seen anything like it before, reaffirming the sense we got from the UE65JS9500 that HDR is potentially more impactful on your viewing experience than 4K.

It should be stressed, too, that it’s not just the incredible black-to-white and colour extremes of the UE78JS9500’s HDR pictures that set new standards for TV technology. Also a joy to behold is the way the screen brings out the most subtle colour and shade differentials at every luminance level: shadow details are abundant, helping dark scenes look deep and realistic; there’s no trace of colour-banding in even the most gentle of colour blends; colours look both punchier and more realistic during dark scenes than they have ever looked on an LCD TV before (bar the UE65JS9500); and there’s no sense of the clipping or flaring out in bright areas that might have been expected from such a bright screen.

While it’s the HDR elements of its pictures that first grab your attention, the 78-inch screen also provides a gorgeous forum for showing off just what having more than eight million pixels in your picture can do. Especially when those pixels are supported by colours as wide-ranging yet also subtly delineated as those made possible by the UE78JS9500’s Nano Crystal system. We used to think UHD represented the next generation of picture quality, but Samsung proves here that UHD plus HDR is really where the future is. A fact that its rivals – even, potentially, LG’s long-awaited 4K OLED TVs – will have to take on board fairly swiftly.

Running the same film clips from their respective Blu-rays through the UE78JS9500 reveals just how important HDR content is to getting the maximum performance out of Samsung’s new TV. The Blu-ray footage doesn’t enjoy nearly the same dynamism and colour range as the native HDR version.

That said, while the UE78JS9500 can’t magically convert non-HDR content to a true HDR experience, its intense brightness and colour response do still make normal broadcasts and Blu-rays look considerably more dynamic and richer than they do on non-HDR screens. Relatively poor-quality sources can have their inherent noise slightly exaggerated by the UE78JS9500’s extra colour and brightness, plus occasionally skin tones can look a bit peaky. On the whole, though, we were very pleasantly surprised by how effectively and sensitively Samsung’s king-sized beast ‘soups-up’ non-HDR content. Which is handy given the current existence of precisely zero commercially available HDR content.

If you’re not comfortable with the way the UE78JS9500 widens the colour and luminance range of non-HDR content, Samsung does provide the tools to tone down the screen to colour and contrast levels consistent with the ‘old’ Rec 709 standard. For the most part, though, we see precious little reason to do this, as once you’ve experienced the brightness and colour the UE78JS9500 has to offer it’s hard to live with anything less.

For all the UE78JS9500’s general picture magnificence, it isn’t perfect. The main issue is the appearance during HDR viewing of slight backlight blooming around very bright objects when they appear against dark backgrounds. This is always the one potential problem with direct LED lighting, since there aren’t as many LED light sources as there are pixels in the screen. The combination of a curved screen and the TV’s ground-breaking brightness won’t have made it any easier for Samsung to control this blooming problem either. 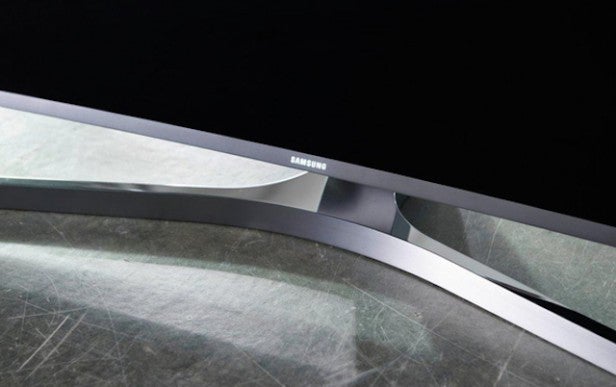 The good news is that you can greatly reduce the appearance of the UE78JS9500’s blooming (which in any case are only an issue with shots containing an unusually extreme contrast range) simply by shifting the TV’s backlight down a few notches. Though if you do this, of course, it slightly reduces the impact of the HDR-friendly brightness levels the screen is capable of.

Before anyone gets too glum about this, though, you don’t have to reduce the backlight as heavily to deal with the blooming as you have to reduce it in order to deal with the clouding on the step-down, edge-lit JS9000 series. As a result, even after calibration images still enjoy a gorgeous next-gen intensity – especially given the size of the screen involved.

The only two other issues to mention are viewing angle and onscreen reflections. Regarding the former, we wouldn’t recommend watching the UE78JS9500 from a wider angle than around 30-35 degrees, as doing so both increases the impact of the blooming and can lead to distorted image geometry on account of the screen’s curved shape.

As for the reflections issue, this is down to the way the curved screen can cause any onscreen reflections to distort across a much bigger portion of the screen than they would with a flat TV. While this means we recommend you keep your room lighting low when watching dark content, though, the UE78JS9500’s combination of very bright images and seemingly improved light filtering makes reflections much less distracting than they were on last year’s Samsung curved TVs.

We’d also argue that curving a screen makes much more sense on a TV as large as the UE78JS9500 than it does on smaller TVs, enhancing your sense of immersion and increasing your peripheral vision’s awareness of the information contained in the image’s extremities.

Used as the main TV for the review period
Tested for more than a week
Tested using industry calibrated tools, discs and with real world use
Tested with broadcast content (HD/SD), video streams and demo discs
Previous
Samsung UE78JS9500 Review Next
3D, Sound and Verdict Review