While watching 3D on the UE78JS9500 is certainly spectacular, it isn’t quite as mesmerisingly brilliant as we’d hoped. The reason for this is that it felt during our tests as if the left, right, top and bottom extremities of the image were suffering more with crosstalk ghosting noise than the central areas. Thankfully your attention tends to be focused on the middle of the image, but it’s still a shame to find the dazzling clarity and detail of the image’s central portions not being replicated right across the enormous frame. Especially as the crosstalk really is very noticeable at times.

On the upside, the way Samsung’s UHD TVs upscale our current HD 3D Blu-rays to UHD is even more appreciated than usual on this huge 78-inch screen, while the UE78JS9500’s ultra-bright, ultra-colourful pictures also work wonders on the sense of 3D space, solidity and dynamism. Furthermore, motion is handled much better here than it has been on previous 3D Samsung TV generations, with minimal judder even if you stick with the relatively artefact-free Clear motion processing option.

There’s a mix of good and bad to report here. In the plus column the UE78JS9500 is able to produce a soundstage of sufficient scale to sound well-matched to the epic scale of the images. There’s an impressive dynamic range on show too, with deep rumbly bass at one end of the spectrum and plenty of treble detail at the other. 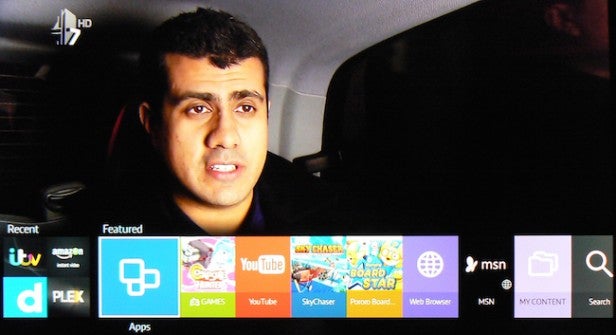 There is one problem, though: dialogue doesn’t sound convincing during movies. Presumably due to the lack of any direct forward-facing speakers voices tend to sound slightly dislocated from the mouth movements on the screen, and can also sound slightly muffled and harsh during very busy soundstage moments.

Samsung UE78JS9500 – Other things to consider

Fancy a little ultra-bright, ultra-colourful, ultra-detailed and ultra-massive gaming? Of course you do. So you’ll be pleased to hear that the UE78JS9500 served up only 10-15ms of input lag when using the provided Game preset. This is one of the lowest figures I’ve come across, and leaves you free to blast away in COD to your hearts content.

Accompanying the new Tizen menus on the UE78JS9500 is a new smart remote control. This is a huge improvement over last year’s effort, thanks to the way it provides clear separation between the point/click and more standard navigation button control options. It’s frankly a relief, too, to find Samsung dispensing with the touch pad control option that cluttered up last year’s smart remote.

If you want the last word in king-sized cutting-edge TV excellence, the UE78JS9500 is it. Its HDR support means there really isn’t anything else comparable out there right now.

It’s impossible to ignore the fact, though, that its 10 grand price tag is beyond eye-watering. Especially when you think that at the time of writing you can pick up Samsung’s 2014 UE78HU8500 for under £6,000. Though of course, that 2014 model is substantially inferior to the UE78JS9500, and offers no HDR support.

The UE78JS9500 represents just about the most fun we’ve ever had with a TV. We love its screen size, we love its HDR playback, and we love its UHD resolution – basically, it’s the closest any TV has ever come to delivering a truly cinematic experience in our test room. Its 3D flaws and remortgage-requiring price mean we can’t quite award it the same 10 out of 10 we gave to the UE65JS9500, though if 3D isn’t a big deal to you and your bank balance happens to be a heck of a lot healthier than ours then feel free to revise our nine score upwards.