Both the gesture and voice control systems are much improved from last year’s rather experimental efforts, but they still ultimately feel like niche tools rather than mainstream revolutionaries. And while the Android and iOS Samsung apps are decent, especially when it comes to streaming video from the TV, they’re neither as flexible when it comes to handling multimedia nor as feature-rich as Panasonic’s Viera Remote 2 app.

We should add here that the Samsung UE55F8000 ships with two remotes: a rather drab looking standard one, and a much more ‘glinty’ little effort with a touchpad. This is a massive improvement over the touchpad remote Samsung used last year, and quickly became our default controller.

If you’re an owner of one of Samsung’s ES7000 or ES8000 TVs from last year and like the sound of the new Samsung Smart TV system, remarkably you can upgrade your set to the new system via one of Samsung’s newly launched Evolution Kits. The Samsung UE55F8000 also delivers Evolution Kit support, so you’ll be able to update it with pretty much any new features Samsung comes up with in the years to come. 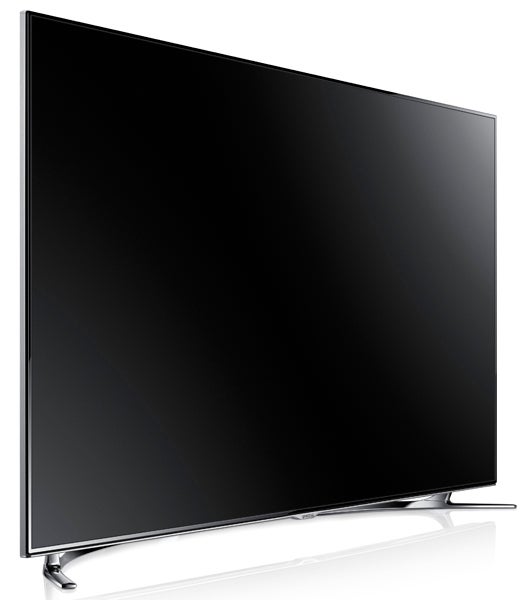 This idea that you won’t have to think about upgrading your TV every couple of years will sound hugely appealing to many modern consumers fed up with the current crazy speed of TV change. Please note, though, that the Evolution Kit will not magically convert the 55F8000 into a 4K TV…

While Samsung’s 2012 TV range did some pretty groundbreaking things where Smart functionality was concerned, they perhaps didn’t advance their picture quality as much as we’d have liked, a fact highlighted as the year went on by the arrival of Sony’s terrific HX853 series. Thankfully, though, Samsung has responded to Sony’s gauntlet in startling fashion with the Samsung UE55F8000, delivering pictures that combine the jaw-dropping ‘spectacle’ for which Samsung is renowned with a new-found respect for serious AV enthusiasts.

The single biggest reason for this is that Samsung has finally got to grips with its old backlight inconsistency problem. Even using the TV’s flawed picture presets, which invariably set the backlight and contrast levels way too high, the Samsung UE55F8000 is able to show dark scenes now while suffering scarcely any of the overt patches of grey clouding so noticeable with previous ranges.

It has always been possible to greatly reduce the impact of this clouding by greatly reducing the backlight and contrast settings on Samsung’s top-end TVs. But even if we ignore for a moment that most people never so much as touch their TV’s picture adjustments after buying a TV, we’re big fans of personal choice. So that Samsung is getting rid of its old backlight problems means users now have far more flexibility over what picture settings they can use without distracting clouds appearing over pictures can only be a very good thing. 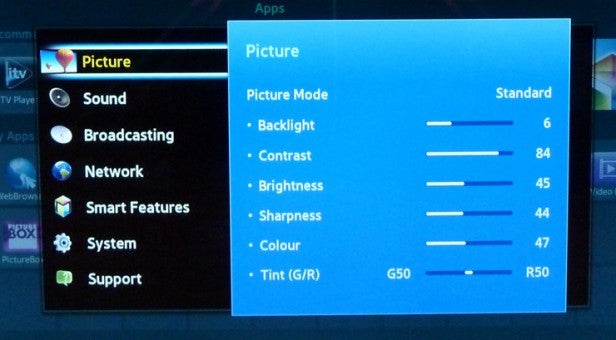 So obsessed has Samsung (finally) been with getting rid of backlight inconsistencies, in fact, that it has even introduced a new Cinema Black feature that independently dims the light levels in the black bars above and below 21:9-ratio films in the Samsung UE55F8000, where the effects of backlight inconsistencies with edge LED televisions are normally at their most distracting.

While we appreciate the greater picture setting flexibility made possible by the improved black response of the Samsung UE55F8000’s panel, though, ironically we still got the most natural pictures – at least when watching the picture ‘seriously’, in a darkened room – by using settings for the backlight and contrast similar to those we had to use last year to reduce the backlight clouding. Namely around 6 for the backlight and between 82 and 86 for contrast.s

While discussing settings, we also found that HD pictures benefitted from reducing the sharpness setting slightly from its 50 default level to around 40-44. Otherwise images can look a touch too ‘fizzy’ for comfort, especially if an HD source naturally contains a lot of grain.

It’s a pity that Samsung still hasn’t provided a preset that roughly follows the settings described above. But in truth it’s only a moment’s work to get things looking good for serious movie viewing (though you can also spend hours with the provided suite of gamma, colour management and white balance tools if you’re so inclined).

Actually, good is an understatement. For post-calibration the Samsung UE55F8000’s pictures are truly outstandingly good.

Continuing the backlight theme we’ve touched on already, for instance, it delivers black colours on the 55F8000 that look actually black. There’s practically no trace of the customary greyness over dark areas still commonly witnessed with edge LED TVs. To put more perspective on this, as well as producing the deepest, richest black colours Samsung has managed, the depth and especially uniformity of the 55F8000’s black colours during very dark sequences are actually more convincing than they are on even Sony’s HX853 TVs.

The fact that the Sony HX853 sets use a full local dimming system (rather than just the Cinema Black top and bottom light controls used on the 55F8000) does mean that the Sony sets deliver more dynamic-looking dark scenes, as the Samsung has to dim its whole image to deliver its terrific black levels.

However, a side-by-side Samsung/Sony comparison also reveals more luminance consistency in the Samsung UE55F8000’s dark scenes, as they’re not plagued by the sort of gentle haloing effects you get with the Sony’s local dimming system. This is a crucial benefit for Samsung that might really help them appeal to the AV cognoscenti. 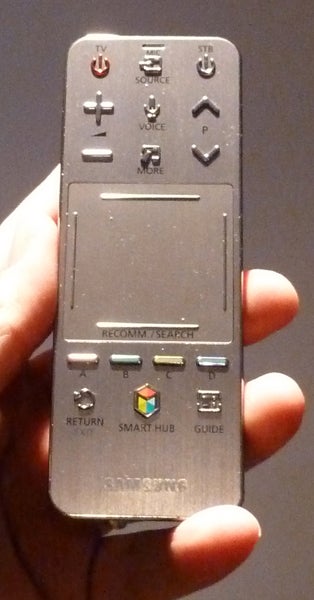 Also impressive is how much shadow detail the Samsung UE55F8000 is capable of resolving during dark scenes without damaging the strong black level response. This shows how good the panel’s innate contrast performance is, as clearly it’s not having to remove as much backlight intensity as previous models have in order to produce a convincing black colour.

The Samsung UE55F8000’s terrific contrast performance is further aided by its screen’s ability to soak up ambient light and reflections from your room. In fact, pretty much the only negative we can raise about its contrast performance is that black levels start to reduce quite dramatically if you watch the TV from an angle of more than 30 degrees down its sides.

More excellent news can be seen in the Samsung UE55F8000’s colour handling. For while the set can certainly go as bold and aggressive as you like with its colours if that suits your tastes, it can also deliver almost endless colour subtlety and outstandingly natural tones if you want those instead. Especially since – as touched upon earlier – the set has the high level calibration tools necessary to enable it to meet any of the key video standards with impressive precision.

Used as the main TV for the review period
Tested for more than a week
Tested using industry calibrated tools, discs and with real world use
Tested with broadcast content (HD/SD), video streams and demo discs
Previous
Samsung UE55F8000 Review Next
3D Pictures and Verdict Review