Samsung’s latest 4K screen is being billed as being for both gamers and business users alike. As well as having key gaming features, such as AMD FreeSync and darkness-enhancing game modes, its attractive chassis houses an LCD panel that targets quality over the ultimate in fast response times.

In other words, this is potentially the perfect upgrade for those who want a premium monitor, but without stretching to the £1,700 plus Dell UltraSharp UP3214Q and Samsung UD970 for example.

This may be a step down from the top-end Samsung UD970 when it comes to some key features – mainly Adobe RGB support – but it wants for little when it comes to build quality and looks. There isn’t quite so much brushed metal on show, but it benefits from the same slender and tidy overall design.

It uses a simple two-tone colour scheme of matte black plastic with some metallic painted sections. While this may not sound all that premium, it’s well executed. The design cleverly hides all the unsightly bits – such as ventilation grilles and connectivity – to leave a clean-and-tidy-looking addition to your desktop. A flash of metal round the edges and along the front of the panel add the finishing touch. 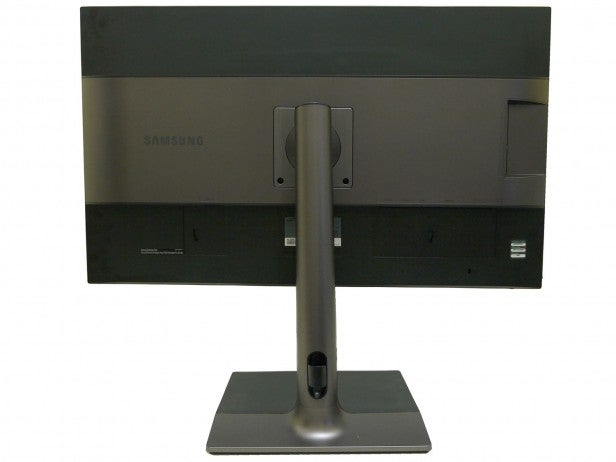 Being a 32in screen, it’s massive – although impressively slim and slight for what it is. Nonetheless, you’ll still need a gap of at least 74cm wide to fit it in. Luckily, it’s height-adjustable, but here too you’ll need at minimum 50cm of vertical space to accommodate it. The sturdy rectangular base is 30cm wide and 28cm deep.

The stand is excellent. It offers a plentiful 130mm of height adjustment, plus the whole screen can be rotated into a portrait orientation and it can be swivelled 60 degrees to the left or right. It’s an impressively slender mechanism and adjustments are fairly smooth and easy to make.

For those users that require even greater adjustment options, the display also has a 100 x 100mm VESA mount. The stand requires the loosening of only two screws to be removed.

The controls for the U32E850R’s OSD are on the front bezel, rather than hidden round the back like on the UD970. This does clutter the front slightly, but not enough to be a concern.

Round the back there’s a tiny cable clip on the stand, while most of the connectivity options sit on the underside of the thicker central section. The USB hub is on the left side. 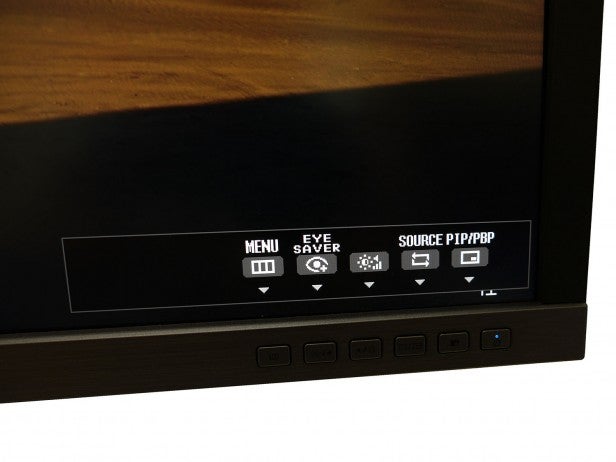 The heart of this monitor is its 32in, 4K LCD panel. It’s made using Samsung’s PLS technology, which is similar to the IPS panels found in competing solutions. Like most such panels, it’s limited to 60Hz – some newer IPS panels go to 75Hz. As a result, it isn’t aimed at elite gamers wanting ultra-fast 144Hz panels; instead it targets those who value good overall image quality.

To this end, this is a 10-bit panel for more accurate colour differentiation as compared to more typical 8-bit models. However, Samsung does only claim it capable of displaying 16.7million colours, so it’s clearly using only 8-bit processing in the background – true 10-bit displays will claim 1.097 billion colours. 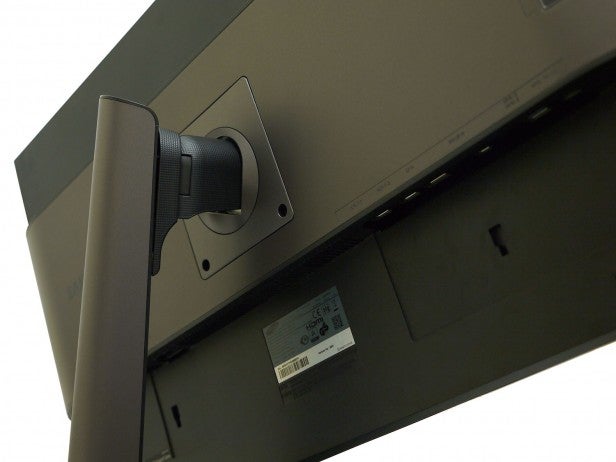 The panel is also rated at 4ms GTG response. This may sound impressive but, ultimately, this is a 60Hz monitor so that’s what it will feel like. Samsung also rates the monitor as having a 1,000:1 contrast ratio, 350-nits brightness and 178-degree viewing angle, all of which are typical of this type of monitor.

Connectivity is ample but not spectacular. There’s both a full-size and mini-DisplayPort along with two HDMI sockets, one of which is HDMI 1.4 and the other HDMI 2.0. That means you can get 60Hz 4K from one HDMI and both DisplayPorts, while the second HDMI is limited to 30Hz at 4K. It’s also possible to manually change the DisplayPort mode between 1.1 and 1.2.

The USB hub provides two USB 3.0 connections and supports supercharging for rapid charging of your devices. Below there’s also a headphone jack, which can be used to listen to audio direct from the digital-video sources. Don’t expect spectacular audio quality from the built-in sound card. There are no speakers built into the monitor, although there is an optional 2.5W sound bar.

On the inside, the main highlight is FreeSync support. This takes this monitor from simply being a massive, high-quality everyday monitor to one that’s ideal for gamers too. While it doesn’t bring the ultra-fast response times of pure gaming panels, this tear- and stutter-eliminating tech does allow for smoother, more immersive gaming. Read our FreeSync review to find out more.

What’s more, it’s particularly ideal given this monitor’s 4K resolution. Huge amounts of graphics-processing power is required to run at even 4K, let alone exceed 60Hz when doing so, meaning FreeSync will likely be kicking in for most gamers using this panel. Exceed the refresh rate of your monitor, and FreeSync is somewhat redundant anyway.

Other extras include picture in picture (PIP) and picture by picture (PBP) modes. The former allows for full resizing and moving of the PIP window, and it supports a native display of up to 720p content.

There’s also an eye-saver mode that reduces the amount of blue light used by the display, which helps to reduce eye strain. An eco mode essentially reduces contrast in favour of an up to 13% reduction in power – ideal for day-to-day work, reading emails and documents – and a game mode adjusts the monitor’s gamma curve to boost visibility of dark areas, making it easier to spot your foes.

Physical setup of the U328850R is simple since it all comes pre-assembled. Also, it isn’t actually as heavy as you might think, at just 10.1kg – that’s 3kg lighter than the UD970. There’s also no power brick to contend with, since the power supply is built in, making for a tidy installation.

Cable management isn’t all that sophisticated: that one little clip on the back of the stand holds everything. It will do – but it’s a far cry from the full-length conduits on some monitors. 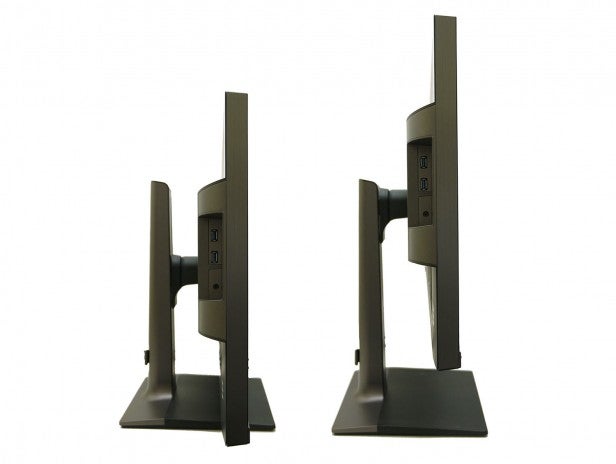 Out of the box the monitor is, as ever, setup at full brightness with colour turned up to 11. However, it’s a simple task to make adjustments since the on-screen display is sensibly laid out and easy to use.

There’s no joystick-style control device – as featured on some of Samsung’s other monitors – but the simple row of tactile buttons in the bottom right is easy to use, even if the onscreen guides aren’t quite aligned with the buttons. Note, too, that the OSD auto rotates when the monitor is flipped into portrait mode, which is a nice touch.

We did notice an oddity with the OSD, however. It would appear (and stay on for its adjustable allotted time) whenever the display was turned on or changing state – going from a game back to the desktop for instance. It’s not a big thing, but it isn’t something we’ve witness before and is slightly distracting.