Introduction
Samsung’s STB-E7500 is a Freeview HD PVR with a built-in 500GB hard-disk drive. Unlike Samsung’s BD-E8500, there’s no Blu-ray player (hence the ‘STB’ prefix), but that doesn’t mean it’s only designed with TV viewing and timeshifting in mind – there’s a generous range of ‘smart TV’ features on board too, offering everything from video streaming and social networking to games and puzzles. The problem is, the game-changing Humax YouView DTR-T1000 recently launched, a YouView PVR that combines live TV and streamed online TV content in an single, intuitive interface. So how does Samsung measure up?

Design
The unit itself is a minimalist’s dream – a slim, gloss black box with clean lines and a flush vertical fascia. There’s nothing on the front except for a USB port (under a flap) and a small LED panel on the right hand side showing the current time or recording duration. It’s a shame this doesn’t show the current channel, but it’s not a deal breaker. On top of the box is a silver panel containing four buttons – Stop, Record and up/down keys for channel changing.

Connections
On the rear panel, sockets include HDMI, composite video, analogue stereo and optical digital audio outputs, Ethernet and USB ports and RF in/loopthrough. Some might be disappointed not to find a Scart output for making copies of TV shows on DVD or Blu-ray recorders – the composite/analogue stereo outs will have to do for that purpose. There’s also a common interface slot on the side for adding pay TV channels.

Features
The STB-E7500 is smarter than your average PVR. Through the wonder of its built-in network functionality (accessed via the integrated Wi-Fi adapter or Ethernet port) you can access a wealth of online content through Samsung’s Smart Hub, or stream your own content from networked PCs and NAS drives. Calling this a PVR really doesn’t do it justice. 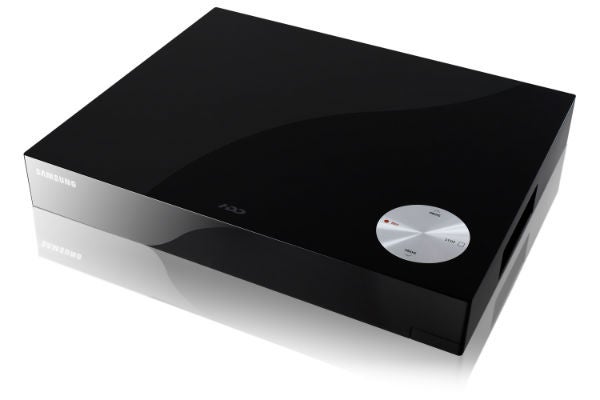 Let’s start with Smart Hub. This online portal has already built up an enviable reputation thanks to its varied selection of apps and zesty presentation. It’s accessed either through the Home menu or by hitting the dedicated button on the remote, and once you’re in, the apps are laid out as colourful icons in front of a gorgeous underwater backdrop (which can be changed to black). You can add or remove apps from the home screen, or group them together in folders. 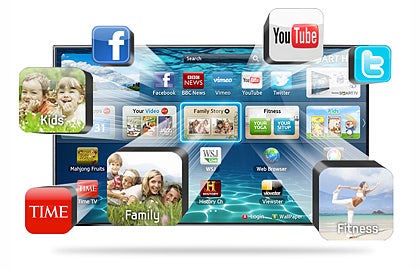 Most people’s attention will be immediately be drawn to the line-up of video sites, including BBC iPlayer, Netflix, LoveFilm, Acetrax Movies, Boxoffice365, YouTube and Dailymotion. But these are backed up by an obscene amount of games, puzzles, educational tools, sports apps and other lifestyle services that make it very family-friendly. Much of this is filler, but you can’t knock Samsung’s desire to provide something for everyone. You can pick and choose which ones to install from the built-in ‘Samsung Apps’ store – downloaded apps are found on the main Smart Hub home screen.

Kids features a series of Canimals and WordWorld videos, which all seem to feature little objects jumping about. There are educational tools here, accompanied by a Sticker Book virtual reward feature. 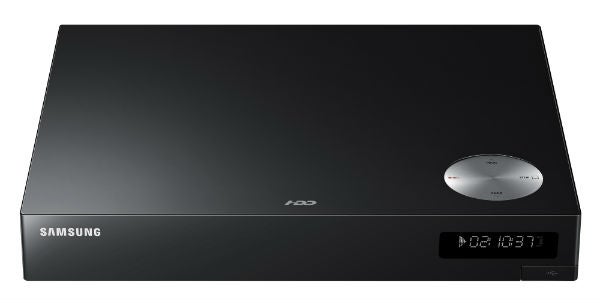 The Fitness zone offers workout videos and tools for measuring your progress, such as The Wi-Fi Body Scale and Noom. You can also check your BMI, how many calories you’ve burned, whether or not you’ve hit your targets – all controlled from a menu screen that’s reminiscent of the Nintendo Wii. Couch potatoes are unlikely to be enthused by this, but it’s impressive nonetheless.

Family Story is a photo sharing service that keeps other Smart Hub users up-to-date with your comings and goings, while Social TV groups together the Facebook, Twitter and Google Talk apps. Finally the Your Video feature provides info about films available on the on-demand sites, while a search tool scours YouTube, Facebook, connected devices and Your Video for keyword-related content.

There’s even a built-in web browser, but it’s cumbersome to use. There are two ways of controlling it with the remote – moving an arrow around the screen or jumping from link to link – but in both cases it’s not worth bothering with, and entering text is a pain. You can plug in a wireless mouse or keyboard, which improves things slightly but you might as well get the laptop out.

If you want to play your own content, then the AllShare Play menu is the place to go. This excellent interface lets you access video, music and photo files stored on networked DLNA devices, USB drives and the HDD – including any TV recordings you’ve made. Its simple left-to-right layout makes it easy to find your content. File support is excellent via network or USB – MKV, DivX HD, WMV, AVCHD, AVI, JPEG, MP3, WMA and AAC.

Elsewhere there are two Freeview HD tuners on board that let you record two channels simultaneously, or watch one channel while recording another. The Samsung STB-E7500 even lets you watch a third channel while recording two others, which is not something that many PVRs can do. You can even access apps in Smart Hub without interrupting the two recordings. Genius. The 500GB hard disk stores 124 hours of HD programmes, or 199 hours at standard definition.

You’ll find all the usual PVR tricks, such as pausing and rewinding live TV (Timeshift) and series recording, alongside some more unusual stuff like 2D-to-3D conversion and picture-in-picture, which works smoothly while you browse the internet. 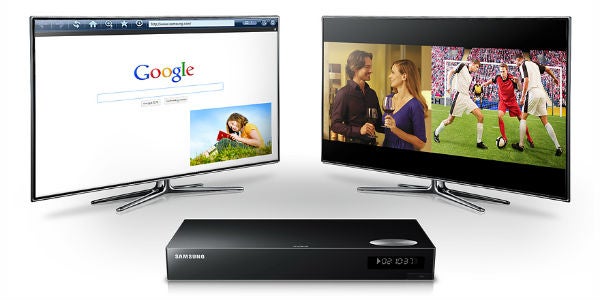 There are still more features to report. Install the Smart View app on your smartphone or tablet and you can use Clone View and Dual View to watch the same or different TV channels on your device. Another app, due for release in Q3 2012, will allow you to watch content on compatible devices stored on the Samsung STB-E7500 while you’re out and about, but not live TV or PVR content. The Samsung unit also supports Wi-Fi Direct.

Operation
The Samsung STB-E7500E runs super-fast thanks to the dual-core processor inside. Web pages load instantly, channel changing is quick and it moves between most menu screens in the blink of an eye, although there’s a wait while Smart Hub loads up. 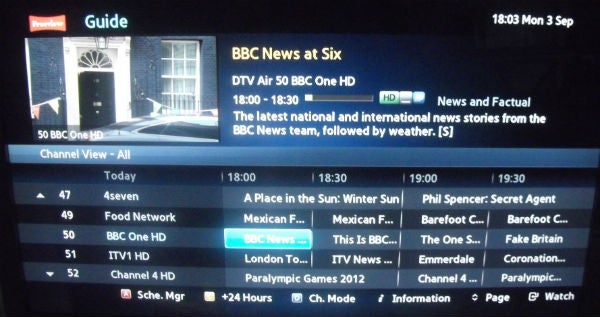 Although there is a really attractive EPG, annoyingly it only displays five channels at once in order to make room for a live TV box. A programme synopsis and a row of options along the bottom also feature. Slick and easy to follow, the Samsung STB-E7500’s EPG offers excellent dialogue boxes for series recording. The Schedule Manager lists the times when the selected show is being broadcast over the coming week. 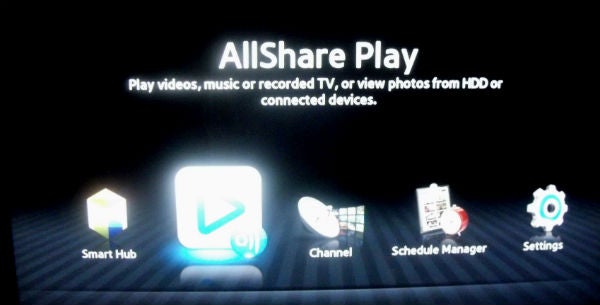 The Setup screen and contextual Tools menu are logical too, plus the Freeview info banner is comprehensive – you can browse any channel up to a week in advance, making it a convenient alternative to the full EPG. 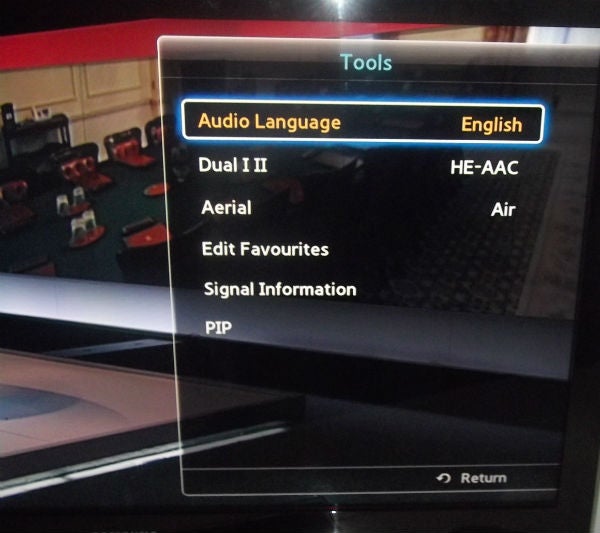 One criticism of the operating system arises when you compare it with Humax’s YouView PVR – Samsung’s Freeview channels and online video streaming are found in two separate areas, whereas the YouView box integrates its catch-up TV content into the main EPG, which feels much more intuitive. What’s more, Humax offers BBC iPlayer, ITV Player, 4OD and Demand 5; iPlayer is Samsung’s only catch-up TV service.

Remote
We didn’t have any trouble getting to grips with the remote. Everything is clearly labelled, and its button layout feels natural and intuitive, with the most commonly used keys – menu, volume, channel change and playback – placed directly under the thumb. But there’s a lot of clutter towards the bottom, which crowds out the important Record button.

Performance
The Samsung STB-E7500 is a terrific performer. Not only does its fast operational speed makes for a slick user experience, its live broadcast picture quality is also excellent. We lapped up a day’s worth of Paralympics coverage on Channel 4 HD and were impressed by how the Samsung STB maintained detail clarity with many objects moving about the screen. Noise is only visible if you look closely. 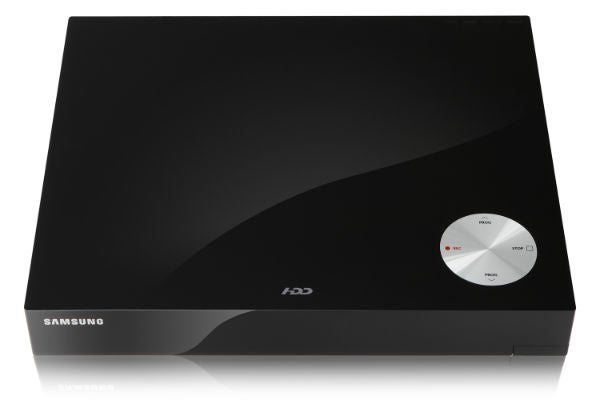 Strong colours look suitably radiant, yet it’s a dab hand at making skin and other tricky tones look natural. During shots of the Olympic Park, edges are emphatically sharp and patches of grass are reproduced in deep luscious shades of green. Lovely stuff.

As you’d expect the hi-def image is bursting with detail, from faces in the crowd down to the texture of the running track. But it’s not just Channel 4 HD that dazzles – BBC and ITV’s HD channels look gloriously crisp too. There’s an obvious drop in quality on SD channels – some more than others, naming no names ITV – but the images are still solid and enjoyable.

Recorded pictures look pristine in HD and SD, meaning that there’s no compromise in quality if you can’t watch something live. All in all we can’t praise the Samsung STB-E7500’s picture quality highly enough.

Switching to online content, BBC iPlayer streams smoothly and looks superb. Other apps like YouTube and Dailymotion are hit and miss but you don’t watch them for their pristine picture quality. The 3D conversion mode doesn’t always convince but with the right programmes it can add to your enjoyment, lending a definite sense of depth to the image.

Sonically TV audio comes through loud and clear with undistorted speech and a nice balance across the frequency range.

Verdict
The Samsung STB-E7500 is by far one of the best Freeview PVRs on the market. Features like Wi-Fi, Smart Hub, AllShare Play, 3D conversion, dual-screen viewing and media playback make it more sophisticated than most PVRs, while the gorgeous onscreen design and dual-core processing make for a slick and speedy user experience – apart from the cumbersome web browser. Picture quality can’t be faulted either.

But how does it compare with Humax’s DTR-T1000? Well, we much prefer the way Humax’s box mixes online and broadcast TV within its EPG and offers more catch up TV services, but in every other respect the Samsung STB-E7500 is a superior PVR – and at around £200 from a few online outlets, it’s excellent value to boot.