As we saw in our previous TV review of the outstanding P55VT30, when it comes to big-screen 3D thrills Panasonic’s latest plasma screens are going to take some beating. But that’s not about to stop Samsung from having a good old go at it in the huge and deeply gorgeous shape of its new 64in plasma TV, the PS64D8000.

If there’s a massive plasma TV that’s looked prettier than the PS64D8000, we can’t think of it. Essentially, from the front at least, it’s a dead ringer for Samsung’s iconic C8000 LED models: a vision in shiny metallic silver with a neat transparent trim extending out from each of its extremities.

It’s inevitably a bit fatter round the back than the impossibly thin C8000 series, but actually, at just 37.1mm it’s daringly thin by plasma standards. Tucked away on the acres of space taken up by this rear panel are a comprehensive selection of connections, all accessed from the side to make the screen easier to wall mount. 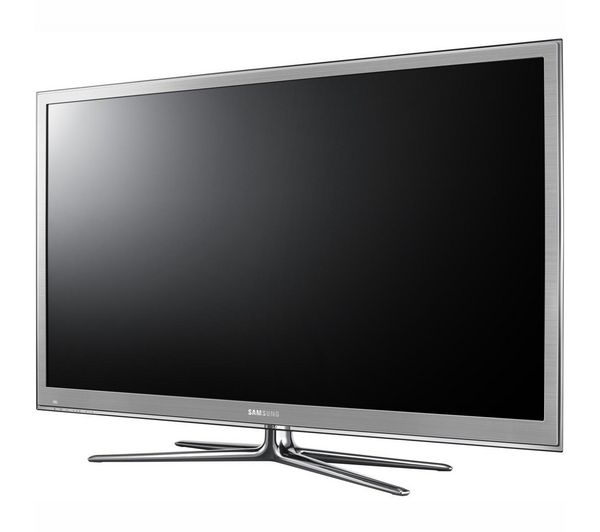 Connection highlights include the increasingly de rigueur four HDMIs (all built to the 3D Ready v1.4 standard); various multimedia options including an Ethernet port, two USBs and a D-Sub PC jack; and an LNB port alongside the usual RF aerial jack.

There’s built-in Wi-Fi too for folk who don’t want to hard wire their TV into their network, while deeper investigation of the LNB port and USBs finds the former able to accept Freesat HD feeds while the latter can record to USB HDDs from the set’s digital tuners, as well as playing back all the most widely-used photo, music and video file formats.

The PS64D8000 has a Freeview HD tuner too, of course, though you might want to note that you can only tune in either the Freesat HD tuner or the Freeview HD one – you can’t have both tuned in at the same time.

The PS64D8000’s network abilities are prodigious, as you would expect of a flagship plasma TV from Samsung. It can easily tap into all the multimedia files on your DLNA-enabled PC courtesy of Samsung’s AllShare interface, and it’s equipped with the fullest interpretation of Samsung’s Smart TV online functionality. 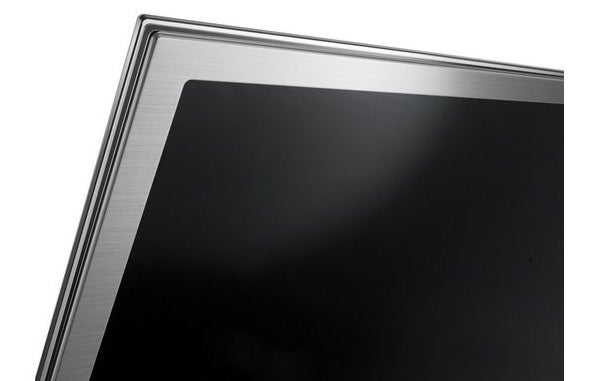 We stress ‘fullest interpretation’ back there because the PS64D8000’s online services include a couple of features conspicuously absent from Samsung’s step-down PS51D6900 plasma model we tested recently, namely a full Web browser, and Skype video functionality.

These potentially very handy features – so long as you can stomach the sight of your mates appearing via Skype on a 64in screen – are joined by the reams of other Smart TV content also found on the PS51D6900. These include high quality video streaming from the BBC iPlayer, LoveFilm, AceTrax, YouTube, and Samsung’s own Explore 3D service (carrying a selection of free 3D documentaries, music videos, film trailers and kid’s shows).

You also get a prodigious number of smaller, more niche ‘apps’. These now number around 60 versus the 40 or so available just weeks ago, showing how fast this new side of TV functionality is growing. It’s still debatable how many of the relatively small-scale apps are really useful, given that they mostly comprise very basic games, small and specialised news and information feeds or pretty simple tips on everything from cooking to tying a tie. But they’re currently all free, so far as we can see, and you’re under no obligation to download anything you don’t want. So while we’re not sure the app store is as big an attraction as Samsung thinks it is, at worst it can be considered harmless.

Also worth highlighting here is the rather brilliantly presented ‘hub’ screen used for accessing not just all the prodigious amounts of Smart TV content, but also all your more regular TV sources.

Delving into the PS64D8000’s onscreen menus reveals that a) these menus are attractively designed and b) that they’re accompanied by a rather inspired on-screen instructions manual, which explains in simple language what each feature in the TV’s menus does as soon as you move your cursor over it. 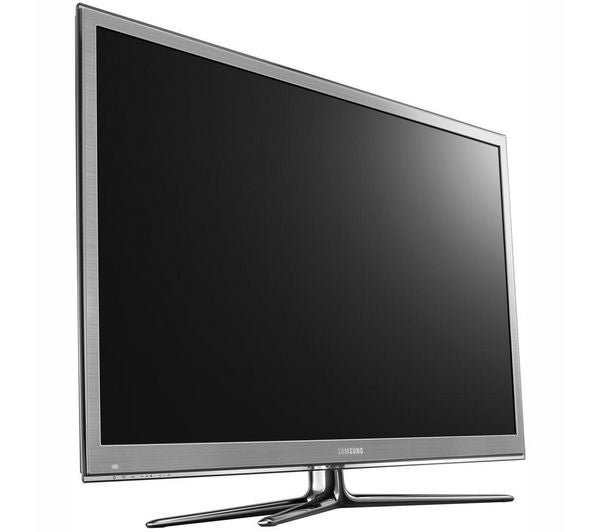 Among the most interesting features for people thinking of coughing-up two and a half grand on a TV are a respectable (though not comprehensive) colour management system, a 10-point white balance adjustment system, a selection of gamma presets, and a ‘cell luminance’ feature that provides an extra level of refinement to the set’s general brightness tool.

Deciding to save 3D for last and feeling a bit mischievous, we kicked off our testing of the PS64D8000 with some fairly grubby standard def Freeview broadcasts. But the PS64D8000 quickly had the last laugh as far from delivering the mushy mess we’d expected to see with such poor quality sources being stretched to 64in, the TV somehow made them look really rather good.

Sharper than they had any right to look, cleaner than we would have thought possible, naturally coloured, and rich in contrast. In fact, as a standard def TV the PS64D8000 is an even better option than the mighty Panasonic P55VT30.

After its standard def heroics we were pretty keen to see how the set handled HD. And it didn’t disappoint. The enormity of the screen proves a great forum for underlining just why HD has caught the public’s imagination so wholeheartedly, as good HD images appear with a level of clarity and detail that’s almost disconcerting when writ this large.

Colours are punchy and dynamic, too, and exhibit a range and subtlety of shade that only the very best TVs can muster. Colours look predominantly very natural.

The most eye-catching thing about the PS64D8000’s HD pictures, though, is their contrast. For sitting right alongside the vibrant colours and some punchy whites are found the richest blacks Samsung has produced on a plasma TV to date. They’re markedly deeper than those of the PS51D6900, and while not quite challenging the black level dominance of Panasonic’s best plasmas, they certainly help the set produce the sort of cinematic images most buyers of a 64in TV will likely be after.

The PS64D8000 initially looks set to complete a clean picture sweep by serving up some cracking 3D pictures, too. We were struck by how vibrant and luminous pictures remained with Samsung’s active shutter glasses safely perched on our noses, and by how much detail, depth and texture there was in 3D Blu-ray pictures. In this respect, on screens as big as this the full HD active 3D format seems a necessity rather than a mere option. 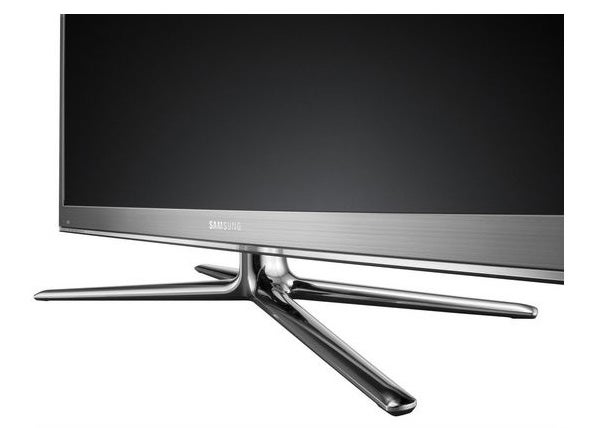 We were also excited to find bright scenes exhibiting hardly any crosstalk. No matter how detailed or deep a sequence we threw at the PS64D8000, the edges of almost all objects, even those in the far distance, looked clear of crosstalk’s double ghosting problem in bright scenes.

Unfortunately though, the PS64D8000‘s crosstalk suppression doesn’t extend to dark scenes, as bright objects surrounded by darkness routinely appear with a degree of crosstalk noise around them – noise that’s made more obvious than it might otherwise have been by the sheer size of the screen.

Another flaw that becomes obvious if you sit too close to the screen is ‘fizzing’ in the plasma cells – a common plasma problem that thankfully all but disappears from a sensible viewing distance (and provided you avoid the set’s Dynamic picture preset). Also, while we’re on a negative roll, occasionally some red tones look a touch orangey, and the set’s average input lag of around 60ms when using the TV’s provided Game preset could cause you a few more deaths in Call of Duty than you’d like.

The PS64D8000’s sound lets us finish on the sort of high such a generally accomplished TV giant deserves, producing enough clarity, dynamic range and raw volume to do the king-sized pictures proud.

With its glamour-puss looks, cutting-edge online functionality and above all generally high performance standards, Samsung’s PS64D8000 is a brilliantly affordable big-screen option for people unable or unwilling to pay for the extra qualities – especially with 3D – delivered by Panasonic’s latest plasma screens.