Amazingly, it’s now already almost six months since we got our hands on our first 3D TV: Samsung’s 55in UE55C8000. A set that left us feeling impressed, aside from a few reservations.


However, the 3D world certainly hasn’t been standing still since April. So when we were offered the chance to look at the UE55C8000’s recently launched bigger brother – yes, that’s BIGGER brother – we jumped at it.


Of course, it didn’t exactly dent our enthusiasm that the 65in UE65C8000 happens to be the biggest 3D LCD TV yet, bringing LCD into line with the largest 3D plasma we’ve seen to date, Panasonic’s 65in P65VT20.


As with almost all Samsung’s 3D LCD TVs, the UE65C8000 uses edge LED lighting. And as usual with Samsung, the technology has been used to deliver a genuinely gobsmacking, ultra slim (under 30mm) design, given extra pizazz – as if it were needed – by a glorious brushed metallic silver bezel with transparent outer trim.


What’s more, having so slender a rump sitting behind so massive a hunk of screen merely emphasises Samsung’s technological – and iconic – accomplishment with its current edge LED designs. 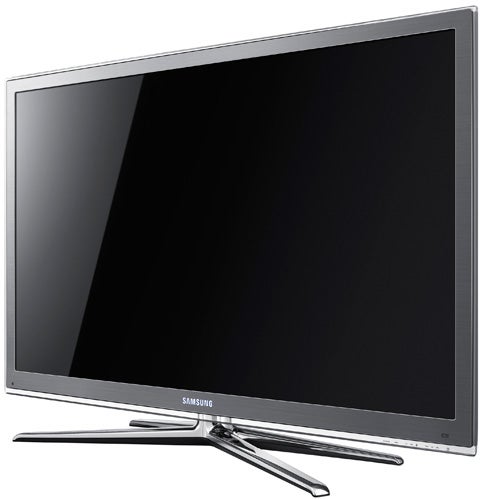 Not that the UE65C8000 is only a pretty face. For instance, it also comes packing some pretty extensive picture management facilities. Particularly welcome is the extent to which you can play with Samsung’s Motion Plus video processing engine. Motion processing systems can often cause as many problems as they solve, and different people have different tolerances to what motion processing can deliver. So it’s really excellent to find that as well as three basic levels of Motion Plus ‘power’, you can also manually tweak the judder and blur processing elements. Personally we preferred to use the Clean preset, or manually keep the judder processing pretty low but the blur processing fairly high.


As usual with a Samsung TV, the UE65C8000 also scores very highly for its multimedia capabilities. These lead off with access to Samsung’s highly impressive Internet@TV service, offering a wide variety of genuinely useful ring-fenced content such as the BBC iPlayer, YouTube, LoveFilm, Facebook, Google Maps, Picasa, Skype and Twitter.


You can also play back a diversity of multimedia file types from either a connected DLNA PC or USB sticks, with further use for the two provided USB ports coming from both the option to add a wi-fi dongle and the option to record from the built-in Freeview HD tuner to a compatible USB HDD.


Recordings made this way are of the pure digital bitstream, and so are flawless in quality, and Samsung is more flexible with the USB HDDs it supports than Panasonic’s USB recorder TVs. You can still only play things you’ve recorded back on to the TV you recorded them from, though; you can’t record TV shows to USB for watching on external portable devices.

Other key features of the UE65C8000 include a degree of (optional) local dimming, where sections of the lights around the screen’s edges can be controlled individually, and a 2D to 3D conversion system that continues to look like one of the best around.


Personally, we still have a major philosophical problem with the whole idea of 2D to 3D conversion, as even a system as clever as that of the UE65C8000 can’t deliver anything like the same quality as a 3D programme that was made that way at source. This means to us that converted 2D images could really undermine 3D’s chances of success. But pretty much all the 3D-making brands now believe 2D to 3D conversion is necessary, so we guess we’ll have to shut up and let them get on with making a mess of things by themselves.


With so many more 3D TVs under our belts since our April date with the 55C8000, we headed straight for the 65C8000’s 3D images to see how they hold up against the increased competition. And to see if the screen’s extra inches either enhance or highlight weaknesses in Samsung’s 3D experience.


The first thing we have to say isn’t good news. For having experienced Panasonic’s plasma 3D TVs since we saw the 55C8000, the crosstalk noise evident on the 65C8000 feels harder to live with than it was before.

Crosstalk noise, if you don’t know, is a phenomenon where you can see double ghosting around certain objects – usually those in the mid to far distance – when watching 3D sources. And it’s apparent to some degree on the majority of 3D images the UE65C8000 presents – especially in the first hour after the TV has been switched on from cold.


Worse, after watching 3D on the UE65C8000 for as little as half an hour we felt rather tired and eye-strained. Much more so than after the same time watching a Panasonic 3D TV (notwithstanding the rubbish quality of Panasonic’s first generation of 3D glasses). This extra fatigue with the UE65C8000, we’re convinced, is caused by our eyes trying to compensate for crosstalk.


Crosstalk also makes 3D pictures generally look rather soft and out of focus at times, and can draw your attention to background parts of the picture rather than the main content you’re usually supposed to be focussing on. In this respect it even undermines the ways depth can be used to direct your viewing experience with the best 3D sources.


Sorry if we seem to be banging on about crosstalk here, but for us it’s become the single biggest obstacle – aside, perhaps, from public apathy! – to 3D’s potential success. What’s more, it’s also become a defining issue in the battle between plasma and LCD technology, for on the evidence seen so far, it’s a simple fact that Panasonic’s plasma TVs suffer less with it than all alternate-frame 3D LCD models.


The LCD camp, of course, point to other things they do well with 3D that plasma struggles with. For instance, the UE65C8000’s 3D images are much brighter and more vibrantly colourful than those of Panasonic’s plasmas. There’s more shadow detail during dark scenes too.

The extra brightness and detail in dark scenes also helps the UE65C8000’s 3D Blu-ray pictures look slightly more detailed and crisp than Panasonic’s. Until crosstalk steps in and makes a mess of things again, of course.


But here’s the thing. While the UE65C8000 gets some things clearly better with 3D than Panasonic’s 3D plasmas, crosstalk is to us far more likely to a) distract us from what we’re watching and b) cause fatigue than any of the current plasma weaknesses.


Time spent with the expansive range of edge LED TVs that have appeared since the April 55C8000 review have also made us rather less tolerant of another sporadically distracting flaw: an inconsistent backlight. With the UE65C8000 there are some really quite striking areas around the edges of the image that look brighter during dark scenes than the screen as a whole. The problem is exacerbated, moreover, if you use the ‘local dimming’ option, since you can sometimes seen rigid ‘blocks’ of light inconsistency when a predominantly dark picture has a bright element within it. 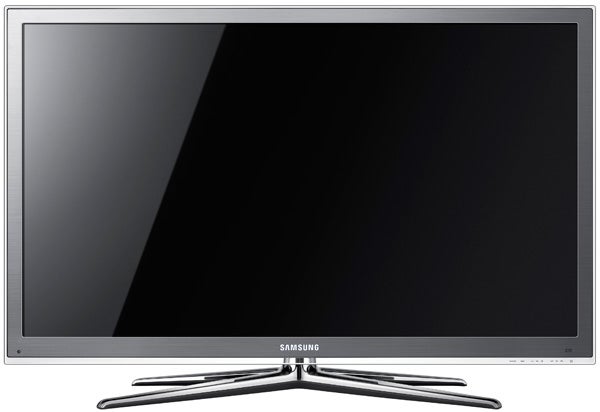 As with the crosstalk noise, once you’ve spotted the backlight inconsistencies you start to look for them, underlining their potential to distract. The inconsistencies become much more pronounced, too, the wider your viewing angle is to the screen.


At this point its high time we reminded ourselves and you about what ultimately made us feel so positively towards the UE55C8000. So, for instance, we find the UE65C8000 delivering pictures in 2D as well as 3D of blistering intensity, dripping with colour and driven out emphatically by an intense brightness output.


HD images also look fantastically sharp, detailed and textured, and happily this sharpness hardly reduces at all when the TV is asked to cope with lots of motion – especially once you’ve spent quality time with the TV’s Motion Plus controls.


Colours look mostly believable in tone and subtly delineated for the most part, and the set’s rescaling of standard definition is a triumph for a TV of this size, doing a terrific job of suppressing source noise while adding in extra detail to avoid softness.


Make no mistake about it: with bright, 2D, HD material, the UE65C8000 really is a quite beautiful TV to watch. The pity is that it can’t bring the top of its game to all the images it shows.


Sonically the UE65C8000 is pretty much the same as the UE55C8000. Which means it’s a good notch or two better than 2009’s rather disappointing Samsung audio efforts, but still too short of bass to really set the world – or action movies at least – alight.


The UE65C8000 effortlessly reaffirms just what works of art Samsung’s latest edge LED 3D TVs are, defying the laws of physics with its absurd screen-to-rear-end size ratio. It also frequently delivers pictures to die for with HD material, and even produces startlingly engaging standard def images for such a mammoth screen. But there’s no doubt that crosstalk noise with 3D and backlight inconsistencies during dark scenes both take their toll on the UE65C8000’s appeal now the 3D and edge LED world has got so much more competitive.