After playing with the A80 for little over an hour it seems like Samsung is using it as testing ground for new features it might eventually deem worthy enough of gracing its flagship line with. The rotating camera is a cool idea and including things like Super Fast charging and a ToF 3D sensor make me think they were odd omissions on the S10, especially as it's meant to be the brand's hero device.

Samsung Galaxy A80 is the brand’s slightly riskier take on the Galaxy S10. It’s one of the most ‘different’ Samsung phones we’ve seen in a long time and could be an interesting look what see flagships looking like in the future.

However, it seems that’s far from the case and during Milan Design Week the Korean company unveiled a host of new A Series devices, headlined by the seriously interesting Samsung Galaxy A80.

If you thought the Galaxy S10 played it somewhat safe with its iterative design then you might be interested in the A80, as it’s far more of a risk-taker. 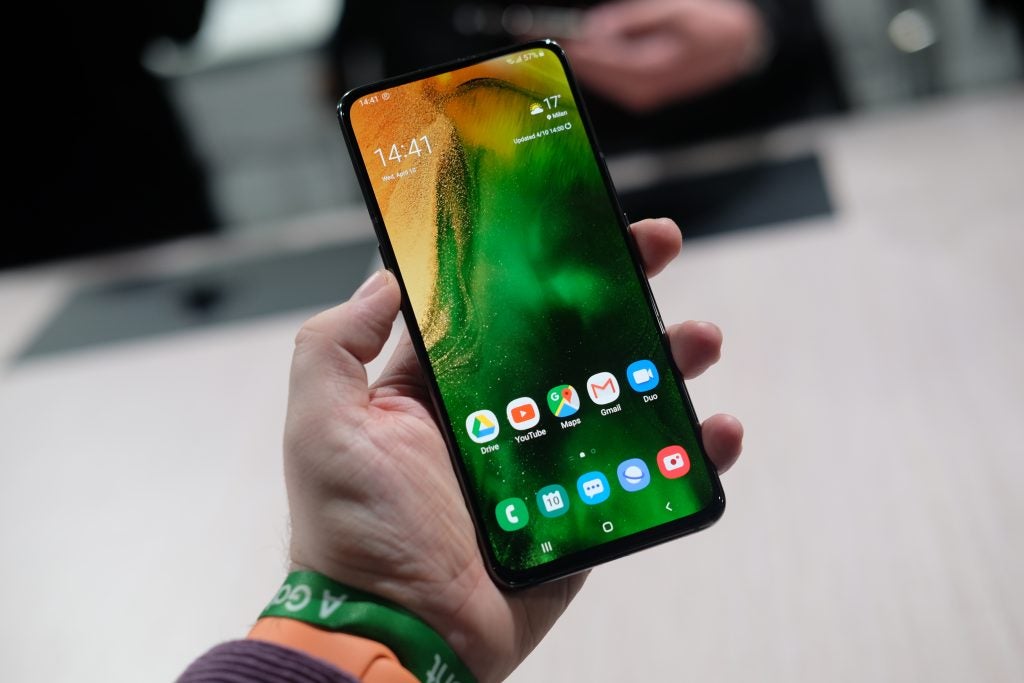 The A80 is Samsung’s first truly all-screen phone. There’s no pill-shaped Infinity-O cutout, no notch and practically no bezel. Instead, Samsung has combined the slide up mechanism we saw on the Oppo Find X with a clever rotating camera system to make a phone that should be an absolute must-have for selfie lovers.

Instead of having a camera on the front and the back, the A80 just has sensors on its rear. There’s a main f/2.0 48-megapixel camera paired with both an 8-megapixel ultra-wide camera and a 3D ToF (time of flight) sensor for gauging depth. The killer trick is that the whole camera module can rotate, letting you take the same pictures, whether you’re capturing yourself or something in front of you. 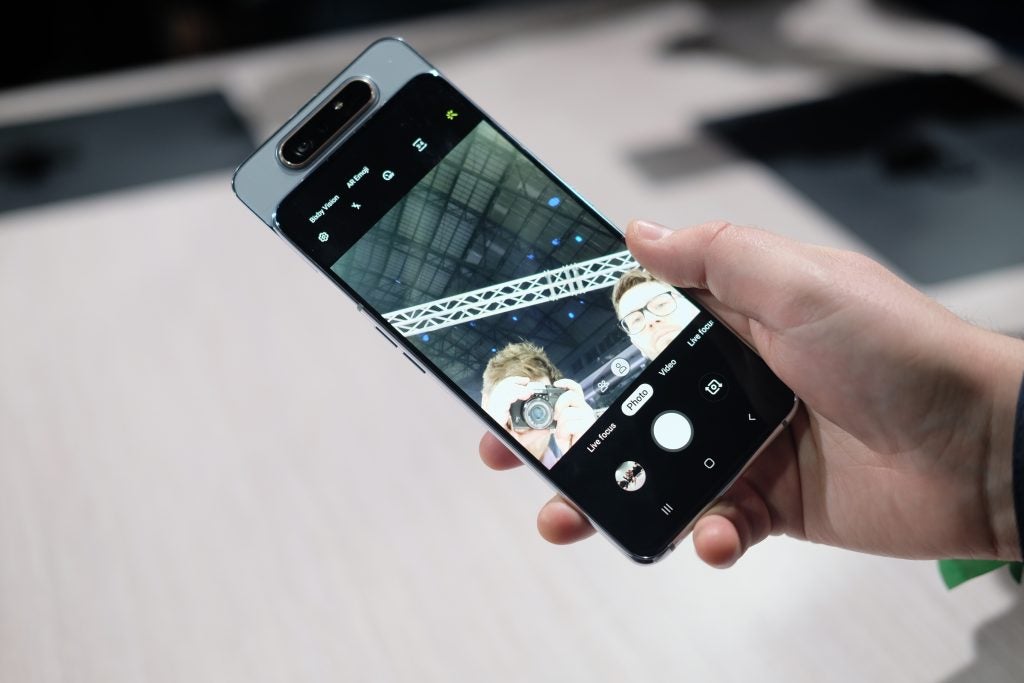 It’s a clever, almost futuristic trick that ensures your selfies don’t suffer due to lesser camera components on the front. Of course, I haven’t had a long enough time with the A80 to properly judge how well the camera performs but there are a lot of megapixels to play with here.

Ridding the phone completely of a notch gives an uninterrupted view of your content and the Super AMOLED display here looks great. It measures a whopping 6.7-inches – matching the Samsung Galaxy S10 5G – and packs in FHD+ resolution. That resolution might not be the highest but Samsung’s OLEDs remains vividly bright and seriously colourful.

An obvious issue does appear though and I’ve had this concern with all slider phones so far: durability. I can’t imagine this coping well with a drop on a hard surface and once the sliding mechanism fails, the phone will likely become unusable. Long-term use also raises the question of how well the mechanism will last 2/3 years down the line.

Even with the seriously slim bezel, a 6.7-inch phone is never going to be on the small side. The A80 is a big phone, made even bigger by the protruding slider mechanism. It’s heavy too, and slightly uncomfortable to grip without properly holding on with two hands. 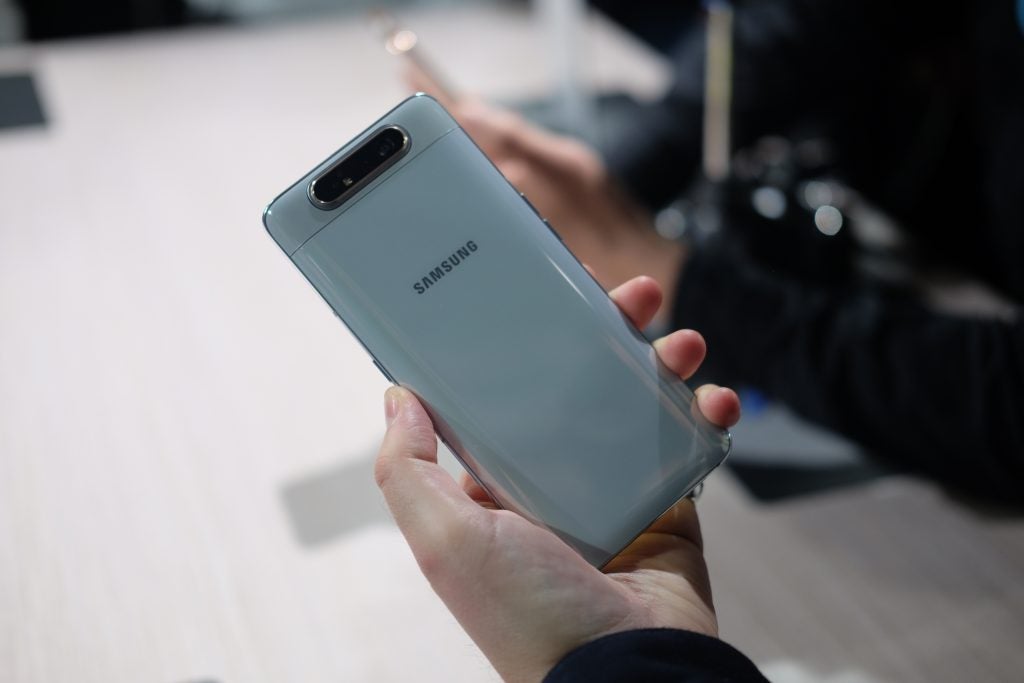 Samsung’s A Series tends to sit below the flagship S Series and while that remains the case here the A80 still packs plenty of oomph. There’s an octa-core processor – likely one of Samsung’s own Exynos chipsets – paired with 8GB RAM and 128GB storage. You’ve got an embedded fingerprint scanner inside the display too, however, Samsung reps weren’t able to confirm whether this was the same unit as the one in the S10.

Keeping the phone (hopefully) running all day is a 3700mAh battery – that’s larger than both the S10 and S10 Plus – along with 25W fast charging via the USB-C port. Fast charging is always nice and this is actually faster than you’ll find on the S10.

So far, so good. However, the A80 does fall short in a couple of areas. There’s no microSD expandable storage, for example, and Samsung has finally ditched the 3.5mm headphone jack. It also seems that a move to a sliding body has forfeited any sort of IP rating for water resistance. 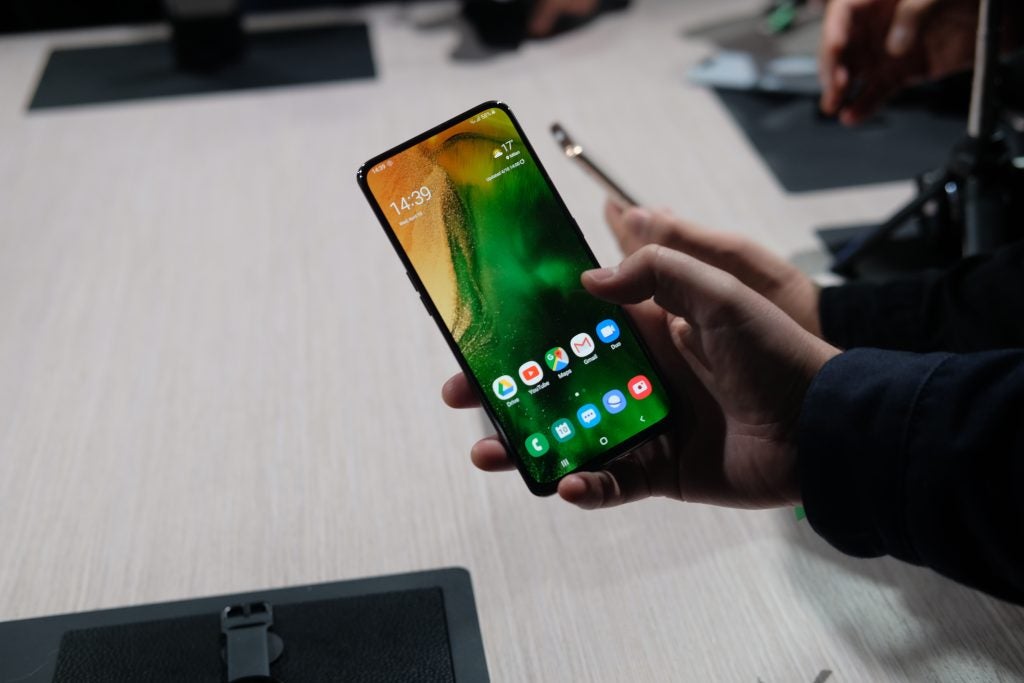 After playing with the A80 for little over an hour it seems like Samsung is using it as a testing ground for new features it might eventually deem worthy enough of gracing its flagship line with. The rotating camera is a cool idea and including things like Super Fast charging and a ToF sensor makes me think that they were odd omissions on the S10, especially as that is meant to be the brand’s hero device.

There’s no confirmed pricing yet, but expect to see the phone available on May 29.