Which Samsung phone is best?

Trying to decide what is the best Samsung phone for you? The Samsung range is huge and covers all corners of the market, making deciding quite a tough task.

Samsung has sat atop Android castle for many years now and, while it has many new challengers, it remains one of the few phone manufacturers that offers a viable alternative to Apple. The best Samsung phone of each year often pushes the iPhone on both specs and price.

The success of Samsung phones often relies on consistency, they rarely have many serious weaknesses, letting them offer users the best overall experience available on Android.

What’s more, with Samsung having cottoned on to the fact not everyone has £1000-plus to spend on a phone each year, the firms finally started pushing some top-notch handsets for the mid and affordable market.

The added choice is a definite bonus, but it’s also a double-edged sword that can make knowing which Samsung phone is right for you tricky for even the most informed buyer. We’re here to help and have created a definitive guide detailing the best Samsung phones we’ve reviewed that are still on sale.

Now read our list of the Best Android phones.

The optimum option from the S20 range 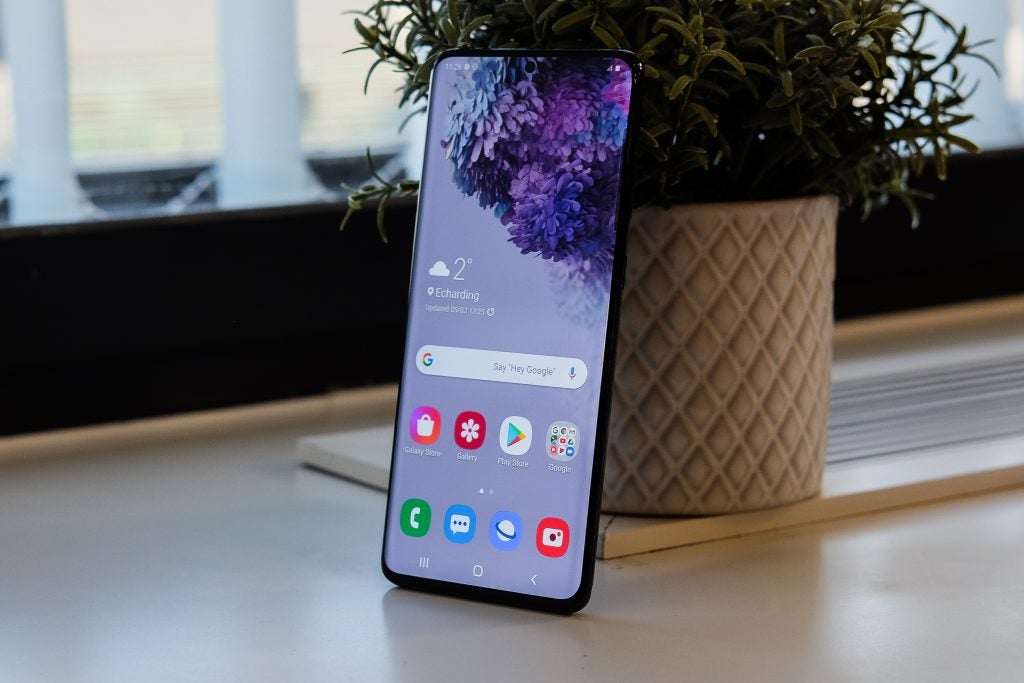 Why we liked the Samsung Galaxy S20 Plus

For our money, the Samsung Galaxy S20 Plus is the pick of the bunch when it comes to the S20 series. Crucially, it delivers in all the key areas: battery, performance, and camera. The battery easily lasted us through the day (although it wasn’t as impressive with the screen running at 120Hz), it packs a punchy performance that should satisfy mobile gamers, and the versatile camera delivered good results even in low light.

We have only minor grumbles about this phone; the software skin might not be to everyone’s tastes, and the 8K video recording option is more of a gimmick than anything. But we reckon that this is the best Samsung handset you can buy right now. 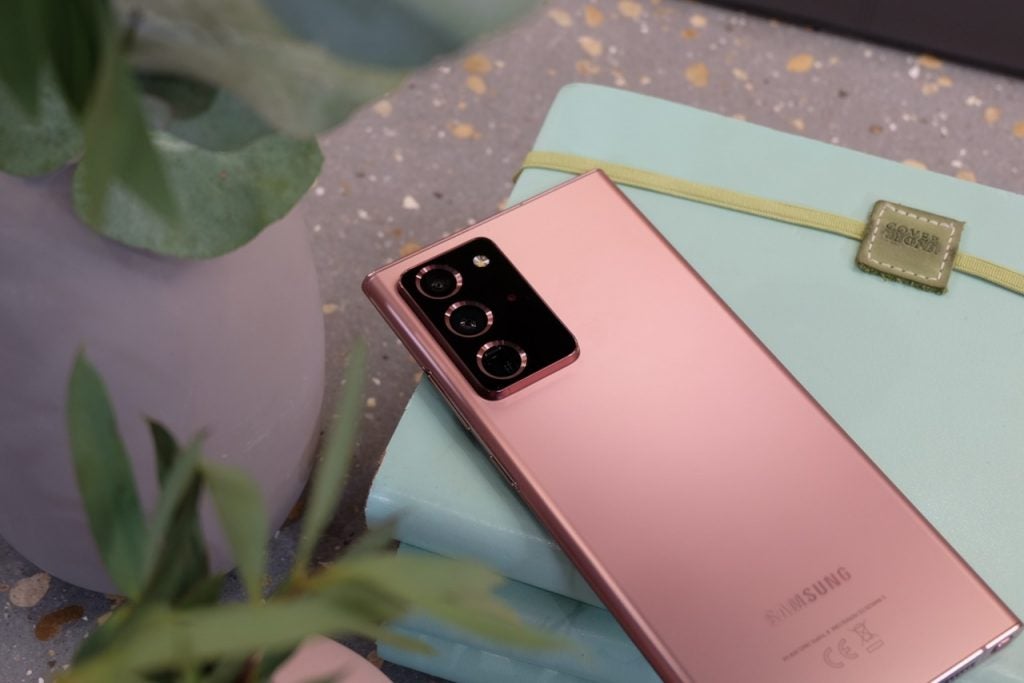 Why we liked the Samsung Galaxy Note 20 Ultra

Think of the Galaxy Note range and you think of a stylus. The stellar S Pen has been around since the inception of the device and it’s only continued to get better. The combination of the new super responsive stylus, a massive display and robust design makes the Galaxy Note 20 Ultra one of the best, if not the best, productivity phone around.

While the S Pen is the signature, the striking display plays a huge part. The new Note 20 Ultra comes equipped with a stunning 6.9-inch 120Hz OLED, making it one of the best screens around.

Performance is also a significant contributing factor to the snappy productivity tasking you can do on this phablet. You’ll be getting 12GB of speedy RAM alongside either the Exynos 990 or Snapdragon 865+. The Snapdragon is definitely the superior option but both offer premium on-device performance.

The best alternative to the S20 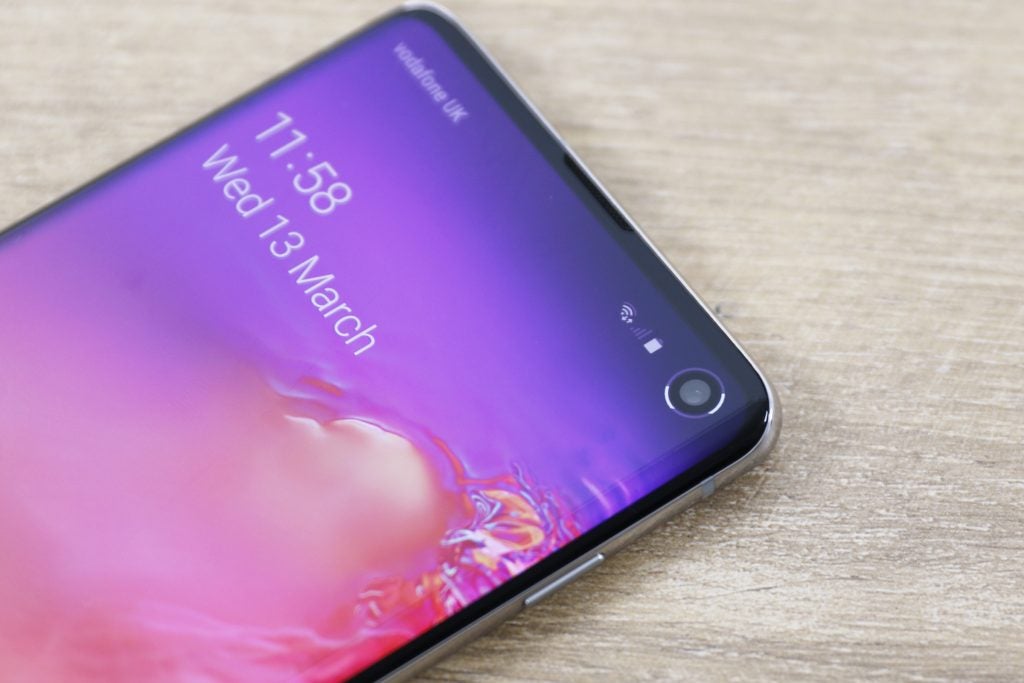 Why we liked the Samsung Galaxy S10

Sometimes Samsung leaves the standard-size S-series phone a little less feature-rich than the XL-side Plus version, but the Samsung Galaxy S10 is every bit as good as the Plus model.

It has a smaller 6.1-inch screen, but you still get the triple-view camera on the back, and one of Samsung’s new Infinity-O displays. The Galaxy S10’s is better, if anything, as the cut-out, is smaller and therefore less distracting when you watch videos.

Unlike most flagships, the S10 series phones also have 3.5mm headphone jacks. That’s the best kind of blast from the past.

What does the Plus have that the standard S10 doesn’t? An extra front camera, which adds an additional field of view for selfies and enables smart depth effect processing.

The best alternative to the S10 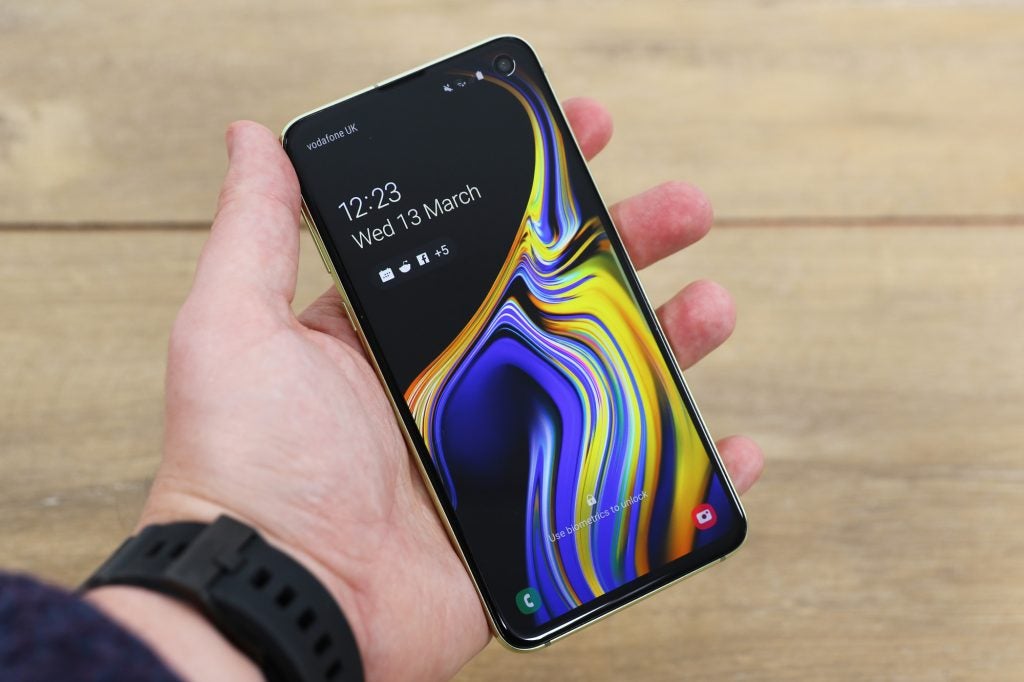 Why we liked the Samsung Galaxy S10e

The Samsung Galaxy S10e is the lower-cost option in the S10 family. It has elements of the high-end duo but misses out on a few extras in each area.

The parts it keeps? Glass on the front and back, the Exynos 9820 processor and high-quality rear cameras led by a stabilised 12-megapixel one.

And the snipped-out bits? The Galaxy S10e has a much flatter screen, with clearer surrounds and a less glossy appearance. There’s no zoom lens on the back, the screen is smaller, and lower-res at 1080p and 5.8 inches, and the battery shrinks to suit too.

Samsung has tried to avoid this seeming like the “cheap” Galaxy S10, perhaps because the price isn’t all that low, by giving it some bolder colours. Most are still reasonably tasteful, but the highlighter pen yellow is an eye-opener. 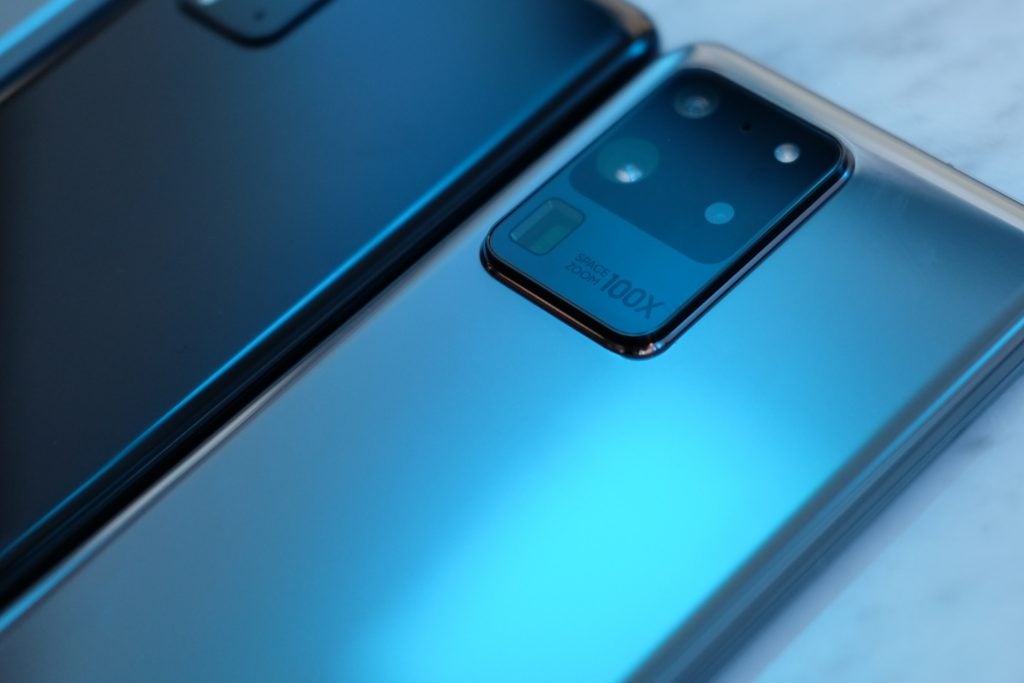 Why we liked the Samsung Galaxy S20 Ultra

If you’re after versatility in your camera phone, then the Galaxy S20 Ultra is a great choice. It packs three main rear cameras (wide, ultra-wide and tele), a sensor for calculating depth, shoots 8K video and captures selfies with a 40-megapixel front camera.

Instead of focusing on computational photography like the flagships from Google and Apple, the S20 Ultra goes for big wins with loads of megapixels. There are 108 in the primary wide camera, 60 in the telephoto and 12 in the wide.

That telephoto is arguably the pick of the bunch, allowing you to zoom up to 100x. While 100x photos aren’t the best, use it to zoom 10x, and you’ll capture some delightful shots with lots of detail.

When it comes to viewing photos you’ve got a 6.9-inch OLED panel that’s the best in the business. It’s big, bright, smooth and very responsive to the touch. Samsung has shrunk down the notch from the S10 to make it less obvious, and the curved edges feel steeper.

Inside the Samsung Galaxy S20 Ultra, you’ll find a 5000mAh battery that can be charged via 25w fast charge or wirelessly, either a Snapdragon 865 or Exynos 990 and 12 or 16G RAM. It’s a 5G phone too, so if you’re on a 5G network transferring snaps, uploading to social media and backup services should be very fast. Storage options range sit at 128GB or 512GB, but there’s microSD expandability too – which might come in handy if you’re shooting a lot of 8K videos. 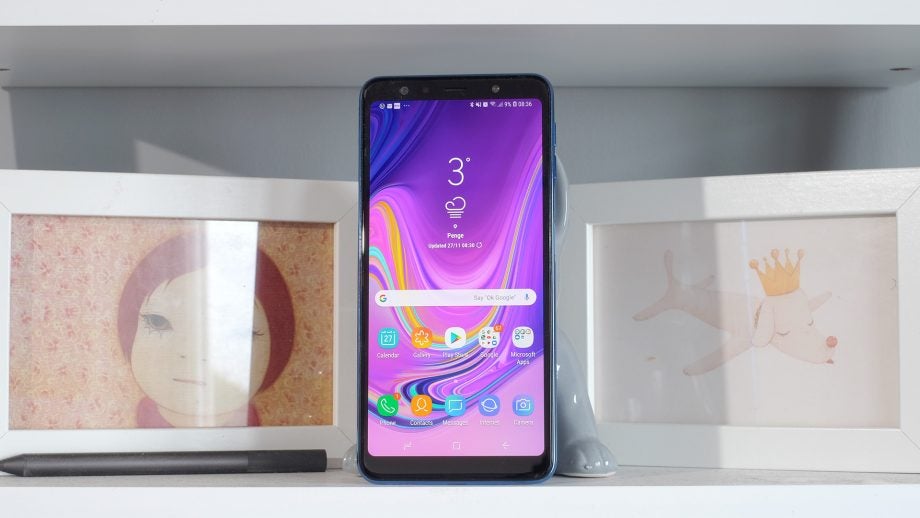 Why we liked the Samsung Galaxy A7

The Samsung Galaxy A7 was a test drive for Galaxy S10 range. It has three rear cameras, including a wide and an extra depth sensor, and a fairly large 6-inch screen.

As you might expect, no element, from the screen to the camera to the design, is quite Galaxy S10-level. But you get that Samsung Galaxy look and feel for around a third of the price. And, of course, one of Samsung’s famous bright and colourful OLED screens.

Cutbacks to consider include a relatively weak graphics processor and plastic coated sides, rather than metal ones. You can’t play high-end games like PUBG with the graphics maxed out here. However, we still consider the Galaxy A7 a pretty good phone for gaming thanks to its large display and extensive storage. Can gamers do better for the price? Yes, from a more value-driven series like the Moto G, or an Honor line. 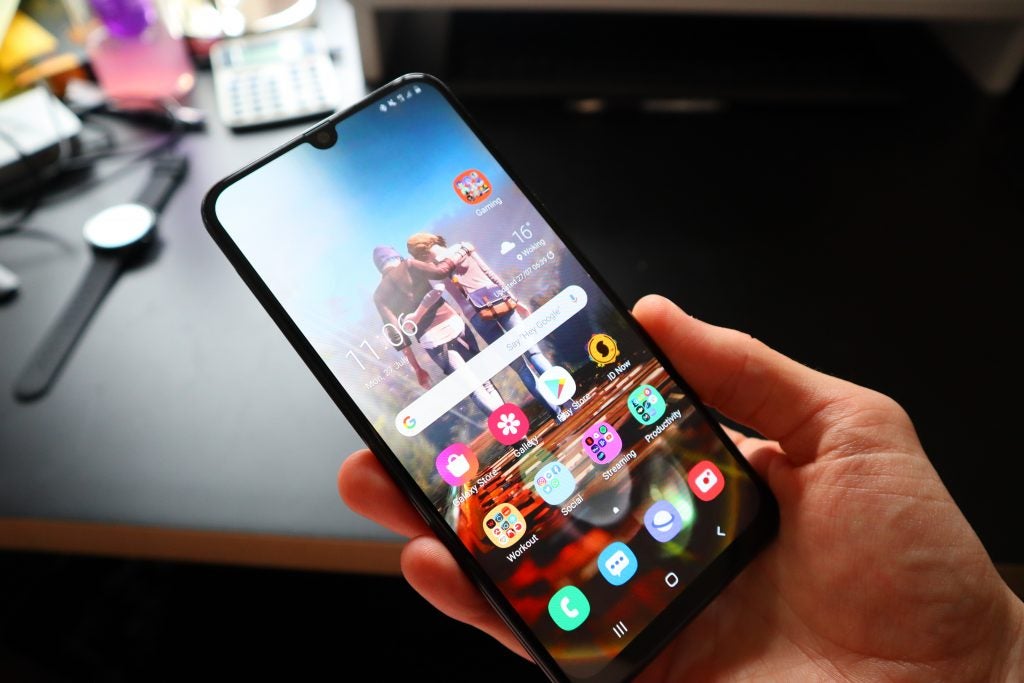 Why we liked the Samsung Galaxy M31

The Galaxy M31 is the first M-series phone to launch in the UK/US for quite some time, despite being a familiar sight in India for quite some time. It sits below Samsung’s more established A-series as the firm’s entry level/affordable line. But, despite costing less than £250, it manages to maintain a surprisingly accomplished features set, making it an excellent option for any buyer on a budget.

The biggest perk is the phone’s 6.4-inch AMOLED, FHD+ resolution display. Though it doesn’t have the high 90Hz refresh rate seen on its arch-rival, the Moto G 5G Plus, the screen’s use of AMOLED is a huge bonus you won’t find on most competing phones. It lets the phone offer wonderfully immersive blacks and contrast levels competing handsets LCD panels simply can’t match. This makes it a great way to watch TV and movie content on the go.

The mid-range Exynos 9611 CPU and 6GB RAM are also ample power to keep the phone humming away happily with regular use. Add to this its stellar battery life and solid for the money quad-sensor rear camera setup and the Galaxy M31 easily earns a place as one of Samsung’s best affordable phones.

Best Samsung Phone Round Up