Samsung says it has improved the picture performance of its 2013 models, and although any step up in quality from last year is subtle, there’s no denying that the BD-F7500 offers stunning picture quality. 3D images are by far the most awe-inspiring, firing 1080p frames to our TV with forcefully resolved detail and explosive colours.

Our trusty Avatar platter provides ample evidence of the BD-F7500’s 3D prowess. The disc’s First Sortie chapter is mesmerising – as the helicopter races alongside the flying creatures, their patterned skin holds steady and their movement is smooth.

As it plummets over the waterfall, there’s an impressive sense of depth and distance in the background valleys, and when the chopper touches down in the forest glade, it’s even more captivating – shards of light weave their way through the bushes, while layers of trees stretch back into the picture, giving you a convincing sense of perspective. Foreground detail is sharp and steady, while the green-dominated colour palette is deep and luscious yet subtly shaded. 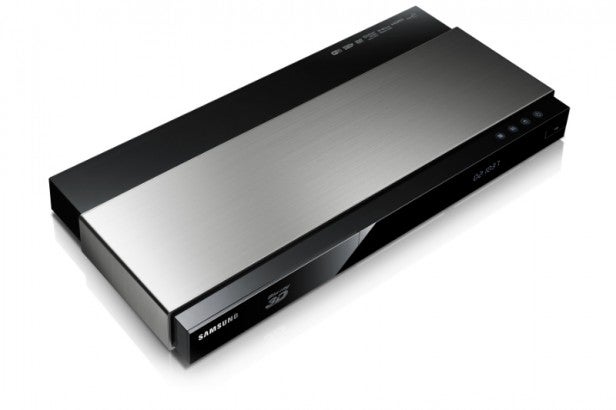 2D pictures are also stunning, even with less vibrant material like Prometheus. The deck handles the murky surroundings of the alien caverns in Chapter 9 with terrific solidity, keeping blacks deep and solid while picking out textures and shading on the background walls as the scientists wave their torches around. The image is clean and punchy, helped along by razor-sharp detail in both long shots and facial close-ups.

Switching to the Silicon Optix HQV Blu-ray disc, its tricky test patterns prove to be no problem for the BD-F7500. The Video Resolution Loss test is perfectly steady and flicker-free from the moment it kicks in. On the Jaggies test, it renders the edges of the moving white bars with clinical smoothness.

The Film Resolution Test is handled with equal skill, with not a trace of flicker or strobing in the moving SMPTE pattern. A camera pan across an American football stadium shows a minute touch of judder as the camera moves but it keeps moiré noise under control amid the rows of seats and holds detail steady.

The BD-F7500 is also a decent DVD 1080p upscaler. Test patterns showing a rotating white bar exhibit no few jaggies on diagonal lines, while detail is stable without excessive shimmering to sully the clarity – as demonstrated by shots of tiled roofs and brickwork on our HQV DVD evaluation disc. It does look a little unnatural and hazy in places but you’re never going to get a completely clean picture from such low-res source material. Web-streamed video from BBC iPlayer looks impressive, with only minor noise levels reminding you of its online origins.

Connected to an Onkyo TX-NR818 via HDMI, DTS HD Master Audio tracks sound wonderfully detailed and engaging. The BD-F7500 also serves as a passable music player – delivered through the analogue stereo output, CDs enjoy a pleasing balance across the frequency range, with clean detail, natural-sounding vocals and a good rhythmic ability. It’s not quite as refined or insightful as a more audiophile-focused deck, but casual listeners will have no cause for complaint.

The BD-F7500 is another terrific Blu-ray player from Samsung. As ever there’s a wide range of features on board, including one of the best internet content portals in the business – which will get even better with the addition of ITV Player, 4OD and Demand 5. The spec sheet is bolstered for 2013 with a couple of new features like screen mirroring and 4K upscaling, while old favourites like DLNA streaming, 3D and USB media playback are as welcome as ever.

But where the BD-F7500 really excels is its operating system. The redesigned menus have been simplified and are all the better for it. Gone are the flashy animations and jazzy backgrounds and in come Windows 8-like boxes and a bold colour scheme that makes everything easier to follow. The deck operates with pleasing slickness thanks to the dual-core processor, while disc loading is the fastest we’ve experienced.

Some bum notes, like cumbersome web browsing with the remote and the long-winded AllShare menu sequence, are niggles rather than deal-breakers – and when you add its sparkling picture performance, distinctive design and generous socketry into the equation, it’s clear that the pros far outweigh the cons.