Samsung’s operating system has been overhauled for 2013, using many of the same sections as last year, but presented in a much simpler, streamlined way. For the main menus, Samsung seems to have taken its design cue from Windows 8, using large solid blocks of colour and large, simple icons. To be fair, there was nothing wrong with the old layout, which was always agreeable and easy to use, but this new-look GUI is equally attractive but also less likely to scare off technophobes. 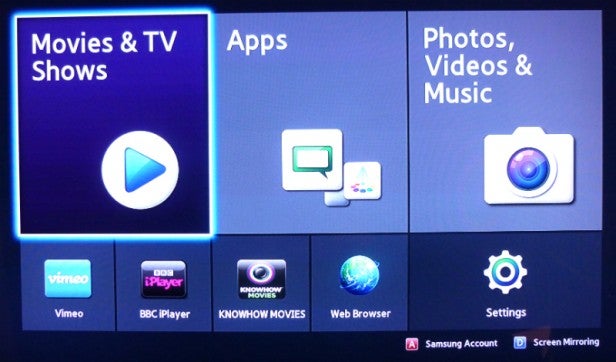 The Home menu, for example, fills the screen with three blocks – one for ‘Movies & TV Shows’, one for ‘Apps’ and one for ‘Photos, Videos & Music’ (AllShare) – with a few recommended apps and access to the web browser below.

The online content menu has also been refurbished. Last year’s slick and eye-catching Smart Hub was arguably cluttered and over-elaborate, whereas here Samsung has gone for a simple grid of small, square icons under the heading My Apps (with lots of empty spaces for new apps) and a row of Recommended apps along the top that learns your viewing habits over time. Another change is that the Fitness and Kids sections are now simply incorporated into the main My Apps grid instead of being given their own large banners.

At the bottom of the screen is box labelled More Apps – select this and you can view all of your downloaded apps, then modify, delete or arrange them into folders as you could on previous players. You can also organise which thumbnails appear on the My Apps page by moving or deleting them (you can only do this through the More Apps menu, not from My Apps itself).

Just one small thing to point out – the main home menu is called ‘Smart Hub’, while the online content section is called ‘Apps’. But when you press the button labelled ‘Smart Hub’ on the remote, it takes you to the ‘Apps’ menu. Confused? So were we at first. It turns out that it’s all due to the fact that Samsung hasn’t tweaked last year’s remote to reflect the on-screen redesign. 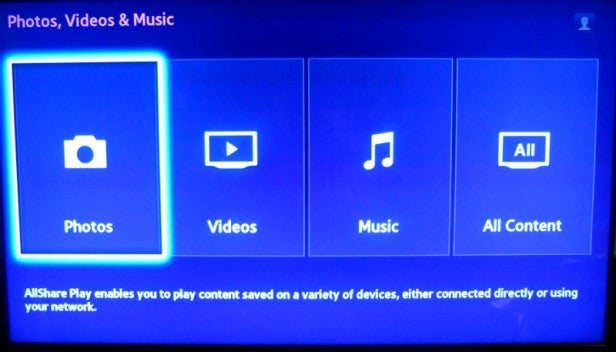 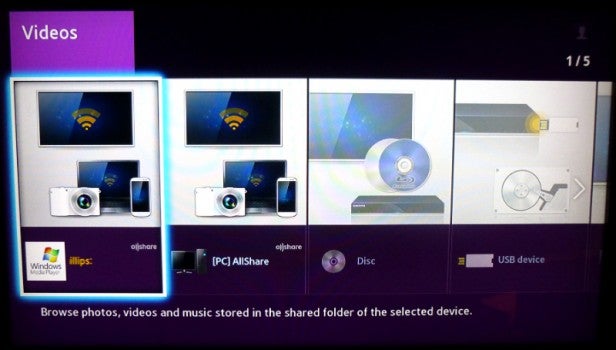 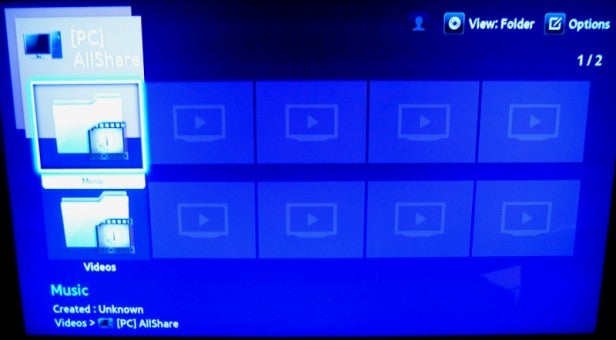 We’re impressed by the look of the AllShare menu, although the menu structure is too long-winded (see the sequence of pictures above). You have to reel through too many menu screens before you get to your actual media, whereas last year’s players missed out some of these stages. Still, when you get there, content is displayed with large, colourful icons, with data for each file at the bottom of the screen.

Navigating the menu system or using apps is a quick, smooth experience thanks to the F7500’s dual-core processor, and discs load faster than ever. With the tricky Terminator Salvation disc, it took just 30 seconds from having the tray open to playing the Sony Pictures intro, which is the fastest time we’ve ever clocked. With less Java-heavy discs like Prometheus you get an even quicker time of 20 seconds, which almost matches DVD player speeds.

Also impressive is the stability and sensitivity of the Wi-Fi adapter – we were easily able to connect to a router in the house from a garden office without any drop-outs, which few players manage, although video streaming was stuttery.

We really can’t fault the remote, apart from the lack of backlighting and the afore-mentioned Smart Hub/Apps mix-up. It’s not hugely different to last year’s zapper, using an uncluttered layout and well-labelled buttons. It’s small and fits ergonomically in the hand, with playback and menu navigation controls placed under the thumb.

During playback you can access the Tools menu, which provides details about the disc and a selection of picture presets – Dynamic (avoid), Standard, Movie and User. The latter allows you to adjust sharpness, noise reduction, contrast, brightness, colour and tint. Hardly ISF standard, but potentially useful.