Be they players, systems or
soundbars, Samsung’s Blu-ray products are always packed with features
and it comes as no surprise to find this range-topping deck offers more
tricks than ever. 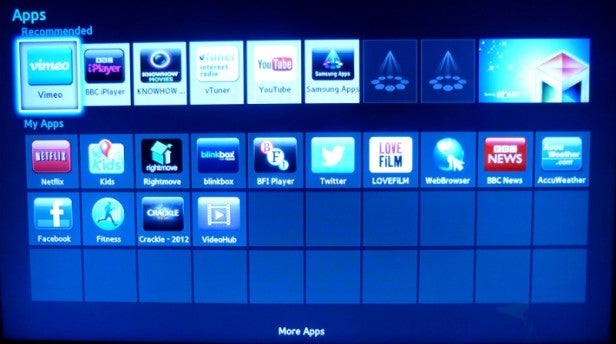 Chief
among them is a fantastic range of network features. Making a welcome
return this year is Smart Hub, which has been simplified (more on that
in ‘Operation’) while retaining the same generous range of internet
apps. The selection is again spearheaded by free video sites like BBC
iPlayer and YouTube, plus on-demand movie sites Netflix, LoveFilm,
Blinkbox and Knowhow Movies. These are backed up by the likes of Facebook, Twitter, Vimeo, BBC News, Rightmove, AccuWeather, BFI Player and vTuner internet radio.

That’s
just what’s displayed on the main menu – there’s loads more content
hidden away in the Samsung Apps menu, such as specialist video, radio
and lifestyle content, as well as games and educational apps for the
kids. It’s a top-drawer selection with a nice blend of content for all
the family. ITV Player, 4OD and
Demand 5 weren’t available on our sample as they were still being tested by Samsung HQ, but we’re assured they will be there by the time the deck goes on sale. That makes Samsung the first, if not only company to offer all four of the main catch-up TV services from a Blu-ray deck, which is not only a feather in Samsung’s cap but also great news for you. 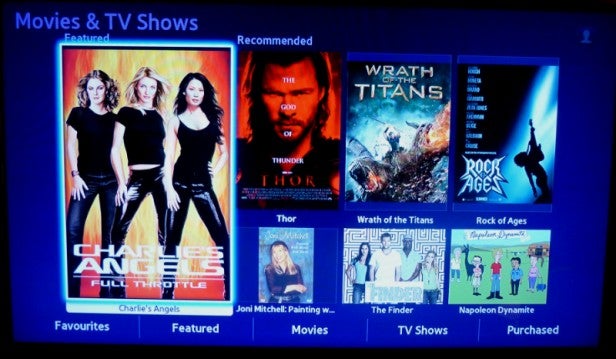 There’s
also a section of the main menu called ‘Movies and TV Shows’, which
replaces the Your Video service found on previous players. It provides a
faster and more convenient way of buying or renting movies than
visiting the individual on-demand sites. The content comes from
Samsung’s Video Hub service and Acetrax Movies.

However, there
were teething problems. When we selected an Acetrax movie to rent or
buy, it took us to the installation page for Sony’s Crackle app. At the
time of writing, the app server was ‘still in development’ and Acetrax
hadn’t been added, so we expect this to be ironed out by the time these
new players hit the market.

Interestingly, Samsung has ditched
its Family Story photo-sharing service but retains the dedicated Fitness
and Kids portals, which boast gorgeous hi-def graphics. Fitness offers a
range of workout videos and training programmes, alongside a series of
tools to monitor your progress, while Kids offers videos and educational
tools aimed at youngsters. While home cinema enthusiasts won’t be
fussed by features like this, it’s nice to see a player with more
strings to its bow than just movie playback.

There’s also a web
browser, which is a little easier to use than last year’s players and
loads pages quickly. That said, it’s still cumbersome to navigate with
the remote, and entering text is time consuming – although Samsung has
improved this with a nifty predictive feature that suggests which letter
to press next. 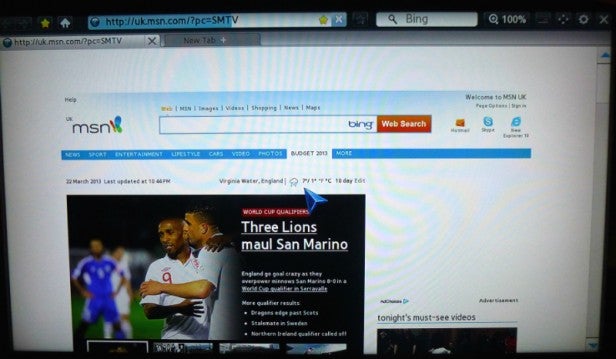 When
web browsing, you can switch between pointer browsing (the cursor
crawls around the screen) or link browsing (which is equally frustrating
with lots of links on the page). Luckily you can also use a USB keyboard and
third-party wireless mouse with the F7500, which makes life a lot
easier.

The BD-F7500 can also stream movies, music and
photos from PCs and media servers on your home network using Samsung’s proprietary
AllShare technology. Samsung recommends that you install its AllShare
software on your PC, which allows you to create a shared folder with the
BD-F7500 (and any other Samsung products in your home) and stream the
files within it. The player is also designed to work with PCs running
Windows 7 or 8 without having to install AllShare, but we found it
worked more smoothly and supported a wider range of files when using
AllShare.

For example, before installing AllShare we tried
streaming an MKV file (1080p video, DTS audio) on a Windows 7 PC and it
refused to play (Windows Media Player 12 doesn’t natively support MKV).
It also played AVCHD, hi-def AVI and WMV files but downgraded them to a
blurry SD resolution. However after installing AllShare it played the above
files with no problems, in their correct resolution.

The rest of
the BD-F7500’s format support is impressive. We were also able to stream
DivX HD, MP4, 3GP, XviD, WMV, MP3, WMA, AAC, FLAC, OGG, WAV and APE.
Supported photo files include JPEG, PNG, BMP and MPO. All of the above
formats also played without hesitation from a USB drive. 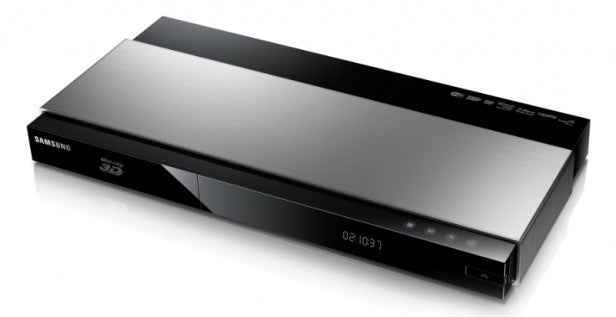 If
you don’t want to increase the burden on your over-worked wireless
router, you can also stream files from mobile devices using Wi-Fi Direct
– although this cuts out the connection to your network. You can also
control playback of content stored on a server using a Samsung
smartphone running the AllShare software.

Elsewhere, there are a
couple of other big additions to the spec sheet. We’ve mentioned 4K
upscaling – included with one eye on the future – which is already found
on last year’s BDP-S790 from Sony, as well as the new Panasonic
DMP-BDT330. Not having a 4K display to hand meant we couldn’t test it out on this occasion, but it’s
good to know it’s there.

The other new feature this year is
AllShare Cast, which mirrors your Smartphone’s screen on your TV. It’s
particularly useful for playing games, which aren’t always the easiest
to follow on a poky screen, and when you rotate the device the player
also rotates the image on the TV. Samsung’s system is not the same as
Miracast (also found on Panasonic’s DMP-BDT330), but the F7500 will
support that too.