It may not compete with a 50-inch plasma telly for watching films on, but the screen makes the Samsung Ativ Book 9 Plus a perfect laptop for some casual movie-watching. This is only improved further by the seriously surprising performance of the internal speakers.

In a laptop this thin and light, you’d expect the speakers to be pretty weak and weedy, but they’re excellent – for a laptop, that is. There’s a nice bit of low-end beef to the sound, and the top-end is fairly smooth and detailed, rather than harsh and brittle as we tend to see in a laptop this size.

The speaker grilles sit on the underside of the Samsung Ativ Book 9 Plus, firing out from each end, producing a reasonable stereo image when you’re sat in front of the laptop. There’s some software tweaking of the sound too. DSP modes let you alter the bass and treble – and add reverb or a 3D effect.

The only slight downside is that it is not tremendously loud – Samsung seems to have calibrated the speaker’s output carefully to avoid ugly distortion. 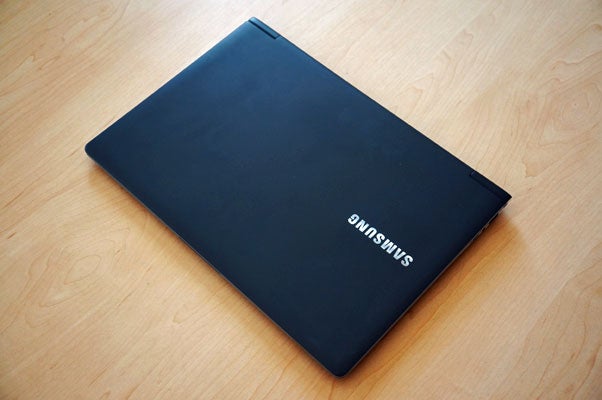 The Samsung Ativ Book 9 Plus is available in a bunch of different spec line-ups, topping-out with a Haswell-generation Intel Core i7 chip, 512GB SSD storage and 8GB RAM.

Our more conservatively-specced model has a 128GB SSD, 4GB of RAM and a Haswell-generation Intel Core i5 CPU. This spec offers a good balance between performance and price, and is a big performance upgrade over the last i5-equipped Samsung Series 9 NP900X3D.

Performance-wise, the latest Core i5 is roughly on par with a last-gen Ivy Bridge Core i7 processor – as seen in the Lenovo Ideapad Yoga 11S.

In the PC Mark 07 benchmark it comes out with 4,404 points, which is a solid score that matches the top-end Ultrabooks of today. It uses a low voltage processor for greater battery efficiency, though. It runs a lot cooler than a desktop CPU.

One of the most serious improvements in the Haswell generation of Intel CPUs is seen in the GPU. This is not a gaming laptop, but gaming performance isn’t quite the unmitigated mess that an integrated graphics laptop of a year or two ago would have been. It uses the Intel HD4400 graphics chip, which offers better performance over last year’s HD4000 model.

In the 3DMark bench, the Samsung Ativ Book 9 Plus scores 25,267 in the low-end Ice Storm test and 4,008 points in the mid-range Cloud Gate test. That these test scores bump to over 34,000 points and 4,259 respectively when the resolution is lowered to 1080p is telling.

While the HD 4440 GPU can handle mid-level games at respectable rates, if you’re thinking the laptop’s high screen resolution will be a gaming winner, think again. It’ll cause a significant performance dip in any titles with visuals worth upping to that resolution – and most games aren’t optimised for such a resolution anyway.

What really helps the Samsung Ativ Book 9 Plus’s day-to-day performance is the SSD drive, which enables quick boot-up times. It can boot up from cold in 10 seconds, and from standby in a shade under two seconds.

Our model had a 128GB SSD, but you can upgrade to 512GB if you have a couple of limbs going spare to cover the cost.

Battery stamina is good by standards of the past few years, but it doesn’t have quite the jaw-dropping stamina of the Haswell-equipped MacBook Air.

Samsung claims the laptop will last for 11 hours, and to give it a proper test we tried a few different usage tests. With maximum brightness (but not with outside mode engaged), the Samsung Ativ Book 9 Plus lasts for six hours 53 minutes. At medium brightness that stretches out to eight hours.

As we were still a ways away from Samsung’s claimed figures, we dropped the screen brightness to minimum, turned off Wi-Fi and switched the keyboard backlight off completely. In this setup, the Samsung Ativ Book 9 Plus lasts for around 10-11 hours. However, it really doesn’t represent normal usage as the screen is really too dim for comfortable viewing in most situations.

After seeing quite how long the Macbook Air squeezed out of its battery thanks to its efficient Intel Haswell CPU, we were a tiny bit disappointed, but there’s an obvious reason why. Its high screen resolution takes its toll on power consumption, and Windows 8 is generally a little less battery-efficient than Mac OS X.

Is gaining the higher-quality screen worth the battery sacrifice? Yes, given that the Samsung Ativ Book 9 Plus still lasts for a full day’s work. However, if on-the-road stamina is a key concern, also consider the Sony Vaio Pro 13.

The Vaio Pro 13 lasts for almost exactly the same time, but you can get a neat and light battery pack that extends it to 13 hours.

Used as our main laptop for the review period
Tested for at least a week
Used consistent benchmarks for fair comparisons with other laptops
Reviewed using respected industry benchmarks and real world use
Previous
Samsung Ativ Book 9 Plus Review Next
Heat, Noise, Keyboard and Verdict Review