We’ve been looking at a lot of sleek, slim and light laptops recently, from Ultrabooks like the featherweight Toshiba Portege Z930 to Sleekbooks like the AMD-based HP Envy 6-1006ea. What we haven’t seen much of is large desktop replacement laptops. High time then to check out this 17-inch Samsung Series 5 550P7C, a beast of a portable machine with the specs to match.

Check out our picks of the Best laptops.

Intro
So what does this particular 550P model offer? Though the Series 5 is generally Samsung’s ‘low-end’ range, with the Series 7 and Series 9 taking top spots, on paper the 550P7C is quite impressive. 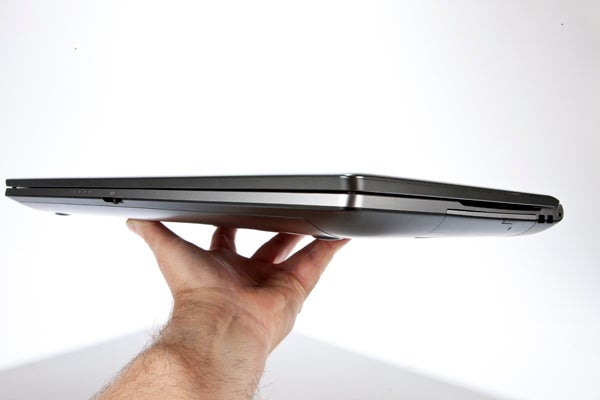 You get goodies like a matt 17.3in screen with a reasonable 1,600 x 900 resolution, JBL speakers with subwoofer, a powerful quad-core Core i7 processor backed by 6GB of RAM, a whopping 1TB of permanent storage, and dedicated Nvidia GT650M graphics to get your game on. A Blu-ray drive completes the entertainment credentials.

Mind you, all this does set you back around £740 (or £840 without the £100 cashback Samsung is currently offering), but that hardly seems excessive for the kind of features on offer.

Design
There’s no denying that this laptop is big and unapologetically bulky at 32mm thick, but no more so than your average 17in desktop replacement. It weighs a considerable 3kg too. 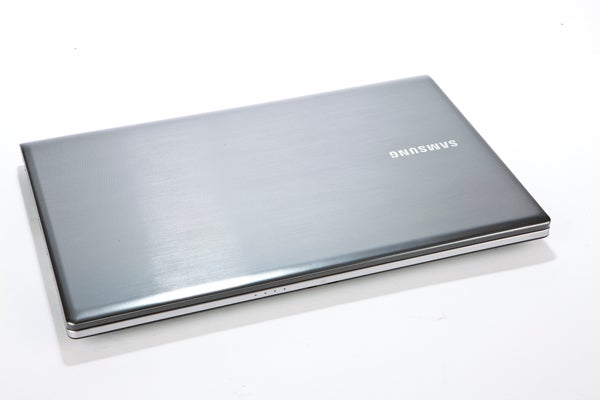 The lid is glossy plastic, but it’s pretty much the best implementation of the stuff we’ve seen. Not only does it genuinely look like perforated metal, but both this finish and a subtle light-refracting ‘rainbow’ effect (like you find on some metals and oil) help to almost completely disguise fingerprints.

The plastic used doesn’t feel like it will scratch easily either. If only Samsung had used a similar finish and quality on its Galaxy Note 10.1 tablet…

On the inside, we have a variety of attractive faux-metal matt plastics that again do an excellent job of disguising their nature. The only disparate element is the black chiclet/isolation keyboard, but overall this laptop looks pretty good. 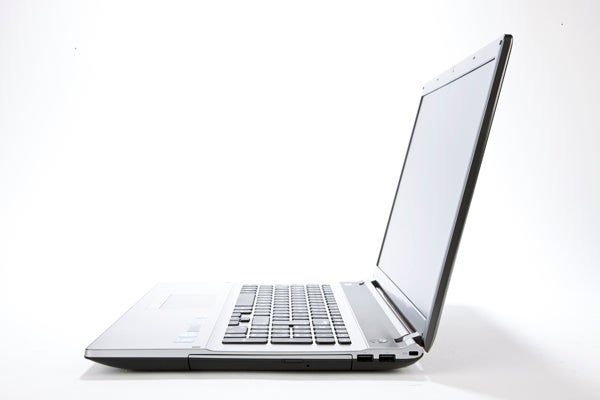 Build Quality
While 17-inch machines rarely feel as solid as their smaller 15-inch and 13-inch cousins, the Samsung Series 5 550P7C is merely average when it comes to build quality. The lid is just fine, with no more than the necessary flex. However, there’s the occasional hint of creak from the inside panels and a bit more give to the left of the keyboard than we would like.

Even the palm rest suffers from some flex, though the keyboard area is pretty solid. Frankly, it’s not a patch on the superb Samsung Series 7 Chronos. 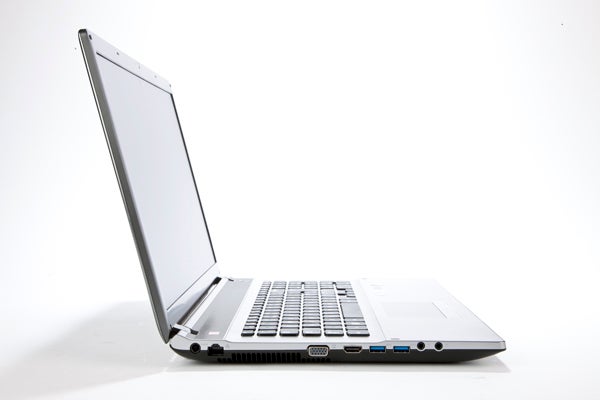 Connectivity
Connections on the Samsung 550P7C are pretty standard for a large multimedia laptop. On the left you’ll find Gigabit Ethernet, VGA and HDMI for video, twin USB 3.0 ports, plus headphone and microphone jacks.

The front houses the SDXC card reader, while on the right we have a tray-loading Blu-ray drive, twin USB 2.0 ports and the Kensington lock slot. Wireless is handled by the usual Wi-Fi N plus Bluetooth 4.0 combo.

Keyboard
The keyboard with number pad on this Samsung Series 5 550P7C is a little special. While layout retains the typical chiclet format with relatively small keys spaced just a little far apart, they offer more travel than any non-Lenovo ThinkPad keyboard we’ve seen on a laptop in quite some time. As such, feedback is truly excellent, with a nice click to go along with those ‘deep’ presses. 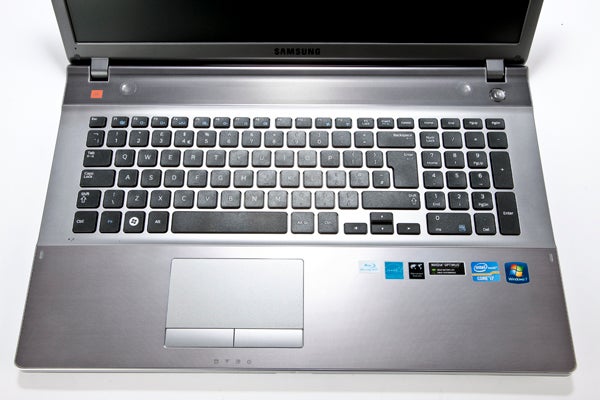 No, it’s still not up to the best Lenovo has to offer, but it comes close. Our only niggle is the lack of backlighting, which we would just about expect at this price point.

Touchpad
You also get a rather traditional touchpad with actual buttons. The large multi-touch pad is very pleasant, and its individual buttons also offer no reason for complaint. Overall then, the Samsung 550P7C is great to use. 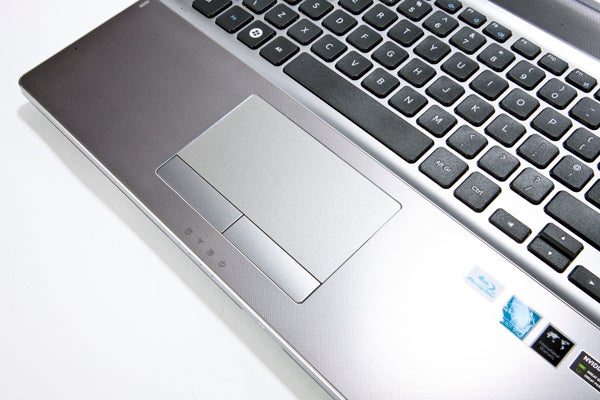 Screen
As expected, the 17.3-inch screen is of the TN variety, with all its inherent disadvantages. However, it’s also better than average in quite a few regards. First off, rather than the 1,366 x 768 pixels still found on some 17-inch laptops, the Series 5 550P7C sports a nicer 1,600 x 900 resolution, even if we would have preferred Full HD. 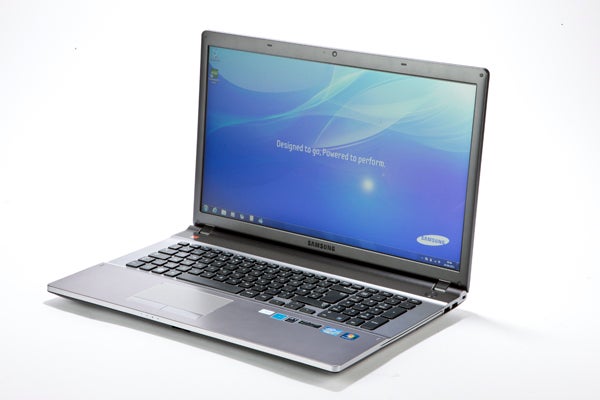 Backlighting is also superbly even, with virtually no sign of bleed. Meanwhile blacks are fairly dark, and we’re big fans of the screen’s anti-reflective matt finish. However, viewing angles are at best average, with contrast shift from the sides as well as vertically. The deep blacks also come at the cost of dark detailing, meaning you may miss detail in gloomy movies and games.

Speakers
Did Samsung make a secret deal with Dr Dre’s Beats? The up-facing JBL speakers and subwoofer on this Series 5 550P7C laptop don’t just manage loud volumes and a credible amount of bass, they do so at the cost of high end and mid-range. 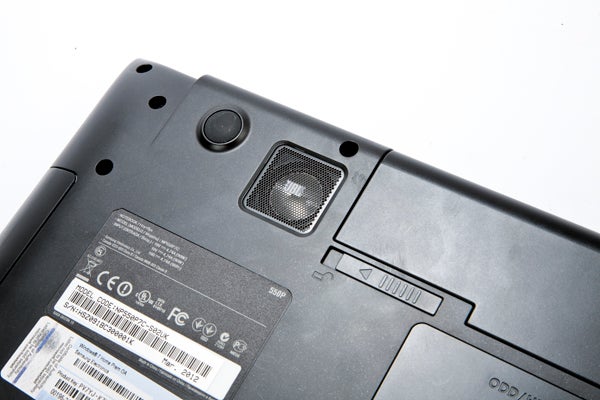 Explosions and bass-heavy tracks will come across with far more punch than the average large laptop, but forget about subtle detailing with any presence or clarity, where it’s present at all. If that’s the way your ears like to roll, the 550P7C rocks. Us, we’ll stick to a decent set of headphones.

Performance
The Samsung 550P7C (or Samsung NP550P7C-S02UK, to give our sample its full model name) makes no bones about being a performance beast, at least where its CPU is concerned. There’s a quad-core Intel ‘Ivy Bridge’ Core i7-3610QM that runs at 2.3GHz but can turbo clock up to 3.3GHz and supports up to eight virtual cores through hyper-threading.

It will happily munch its way through whatever you’d care to throw at it, whether it’s intensive multi-tasking or video editing. The processor is backed by a reasonably generous 6GB of RAM, and though we wouldn’t have minded seeing 8GB here, it should again be adequate for most power users. 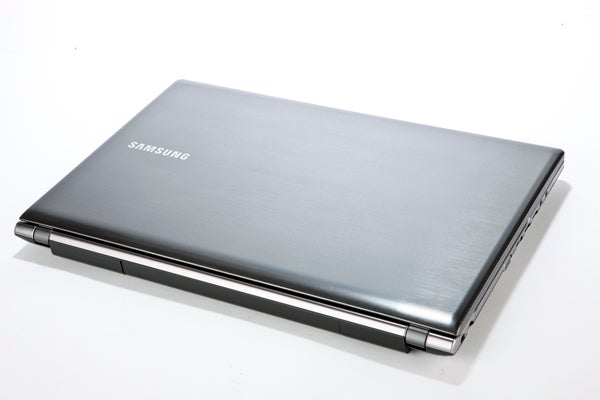 Storage is our first minor let-down. Though 1TB of hard drive is nearly as good as it gets in terms of capacity, it’s only a 5,400rpm drive and without hybrid SSD cache to speed up common operations and boot times, and this shows in our performance results too.

At least this is a laptop you can open up yourself, so you could always upgrade to a solid state drive at a later date without voiding your warranty – Samsung even provides instructions on how to do this and a mSATA to SATA adapter cable in the box, which is a really nice touch. 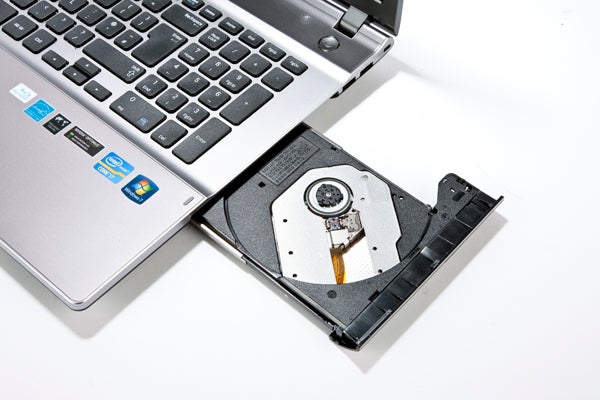 Gaming
Decent gaming is definitely a possibility on this Samsung Series 5 550P7C, thanks to its relatively powerful Nvidia GeForce GT 650M graphics card with 2GB of RAM.

Just for reference, that’s the same chip found in the Eurocom Monster gaming laptop, and it definitely puts this Samsung into the ‘gaming class’ of portable machines. For example, even maximum settings on Stalker at the screen’s native 1,600 x 900 res didn’t faze the 550P7C. 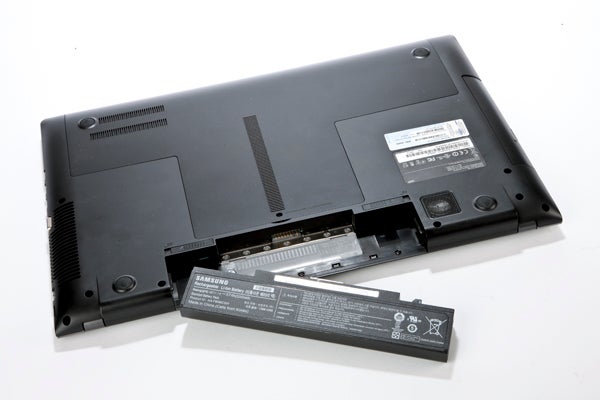 It’s not unusual for large, desktop-replacement laptops to suffer from poor battery life, and unfortunately this particular Series 5 conforms to that norm. Mind you, for its size and power a solid three hours isn’t too shabby, but keep in mind that with wireless turned on and when using the 550P7C’s dedicated graphics, this will go down. At least its quick charging means you won’t need to leave it plugged in too long.

Value
As mentioned, the Samsung 550P7C can be found for £735 with the £100 cashback Samsung is offering at the moment. Realistically, it doesn’t have much brand-name competition at this discounted price. Even for £835 it’s still a good buy, if not quite the bargain it currently is.

Just to give a bit of context, a comparable Dell Inspiron 17R Special Edition will set you back nearly £900… Don’t be fooled by otherwise similarly specced machines with GeForce 560M or 630M cards either, as these are vastly inferior for gaming. 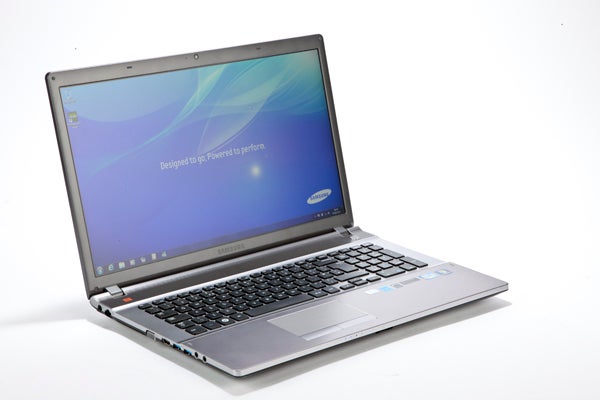 If gaming is not important to you then there are plenty of alternatives, and if you don’t mind going a little smaller there’s always the delectable Samsung Series 7 Chronos. However, for this particular mix the 550P7C is priced very well.

If you’re after an unapologetic desktop replacement that can handle anything from video decoding to gaming, Samsung’s Series 5 550P7C is a great buy. This powerful 17-inch laptop might have a few shortcomings, but its looks, usability, performance and excellent value for money more than make up for them. Gamers will be especially pleased with the Nvidia GeForce GT 650M graphics, which lets you play many titles at full settings on the Samsung 550P7C’s 1,600 x 900 screen.