The Beats by Dr. Dre range of headphones has only been around since 2008, but in the few years of its existence, it has become the most popular “trendy” range of cans in the western world. It has arguably brought headphones into the consciousness of normal gadgets buyers more than any other range in living memory. But are the Beats Solo HD, the higher-end version of the range’s on-ear Solo set, any good?

A big part of the reason for the Beats range’s success, other than that big, bad rap singer name, is design. All the headband sets maintain a consistent look that is undeniably stylish. They’re simple enough to appear genuinely tasteful but distinct enough to become iconic – edgy enough to nudge its way into youth culture without causing an instant, despairing sigh in anyone over the age of 22. Of course, step back during the commuter rush and you realise they’re
really just the youth-oriented high street alternative to Bose’s now
fully-grown range of headphones – but don’t tell Dr. Dre. 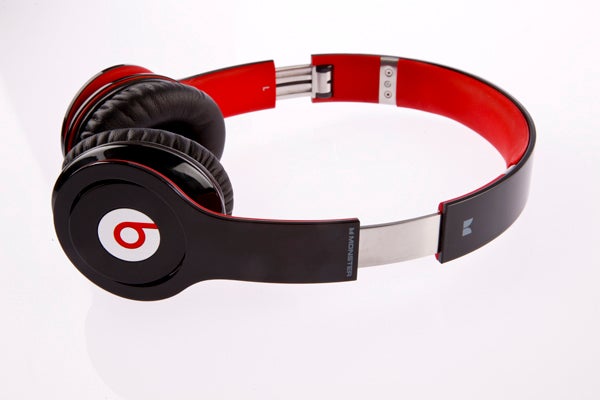 Hardware-wise, the Beats Solo HD are fairly traditional, but do not put a foot wrong. Made largely of glossy black and soft-touch red plastic, they could easily appear cheap but the finish is in fact very good. There’s also a thick band of metal that runs through the middle of the headband, giving it a good balance of strength and flexibility. All told they straddle the priorities of weight and build successfully. 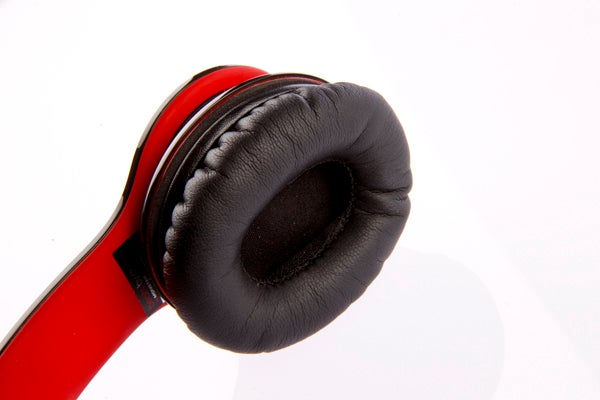 The on-ear cushioning pads are topped with real leather, and are soft and comfy. They are among the most comfortable on-ear headphones we’ve tested. On-ear headphones can cause discomfort for those with more sensitive ears, as they rest directly on them but less so than usual here. The ear cups swivel a few degrees both horizontally and vertically, making them adjust to your head’s lumps and bumps automatically, and eliminating most fit problems occasionally associated with this type of headphone.

There’s just one odd choice to the Solo HD – the headband padding is finished with a squidgy rubbery substance that anyone who played with a Stretch Armstrong back in the 90s will remember. We would have expected padded leather, but this almost-sticky material lets the headband stay very slim while sticking on your head reliably and providing good comfort – although we can’t attest to how it feels against a shaved head. 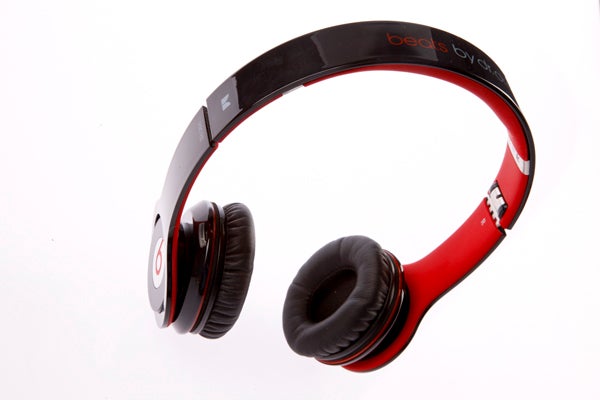 Noise isolation is fairly good too, the inch-thick pads creating a reasonable seal between your ears and the outside world. This makes the Beats Solo HD better-suited than many over-ear headphones for use on public transport – a good thing given how frequently we see them worn on trains and buses – though in-ear headphones or noise cancelling sets provide another level of noise reduction.

Another big win for the flexibility of these headphones is its removable cable. A standard 3.5mm stereo jack plugs into the bottom of the left ear cup, making it very simple to upgrade to a longer cable – you can snag a 5m upgrade from everyone’s favourite auction site for a couple of quid. The bundled cables do offer some neat custom tweaks, though. The jacks bear the Monster and Beats branding, and the cable is finished in the trademark Beats red. Two cables are included in the box – both of just over 1m in length – one bearing a ControlTalk handsfree and remote housing, the other doing without. 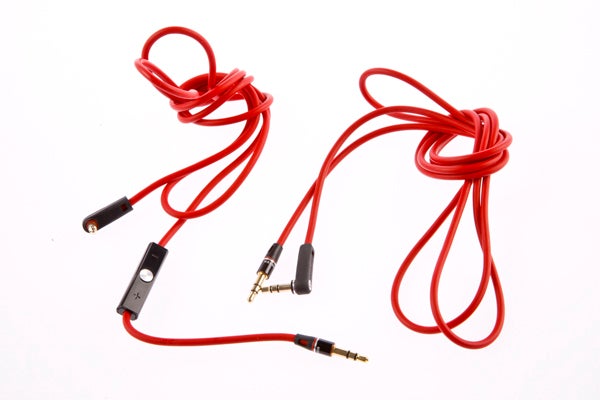 Much in the same way as the iPhone design has become too common to be assessed without looking through the prism of its success, the Monster Beats range is too popular to be abstracted entirely from its associations. They are good-looking headphones, but we find their brash links to “urban cool” a little ugly. 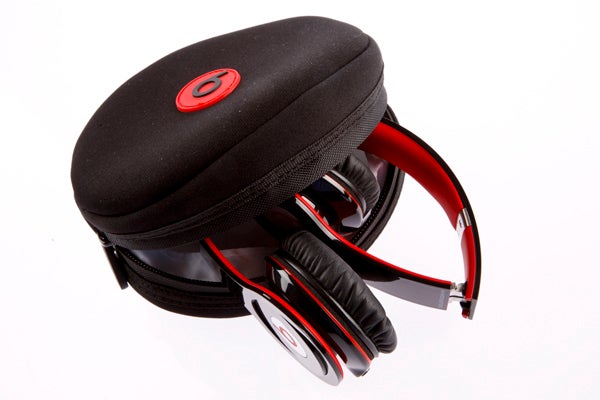 Aside from the headphones and the pair of cables, the box also includes a neat neoprene carry case and a cleaning cloth (a red one, naturally). The case isn’t there to provide absolute protection, but as the headphones fold up across a strong metal hinge in the headband, it makes more sense as an accessory than usual.

The Monster Beats Solo HD are a slightly tweaked version of thee original Solo on-ears headphones. They cost £20 more at RRP and use a high-gloss plastic finish in place of matt.

Monster doesn’t boast about the technical specs underlying this upgrade, instead dubbing them “high performance” and “high definition” respectively – terms which have no concrete meaning here beyond their marketing function. We reviewed the Solo pair last year and were thoroughly unimpressed with their sound. While the claim of improved sound here isn’t a fabrication, the Solo HD don’t do enough to turn the Beats boat around. 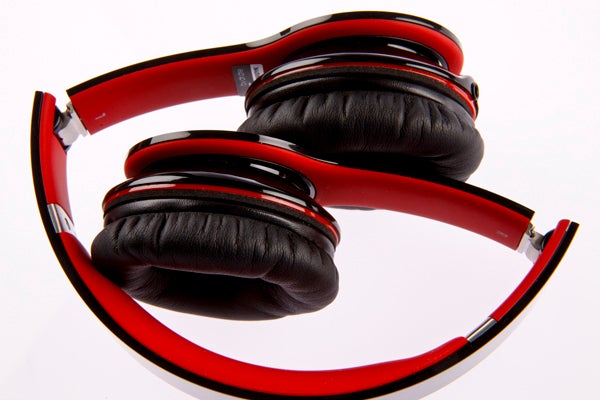 These headphones have been designed under the philosophy that big bass is good bass. When, in actuality, good bass is something entirely different, something that only converges with “big bass” on very rare, but delightful, occasions.

What results from this faulty approach to the bottom end is best described as a cloying fug. Like eating caramel that sticks to the roof of your mouth, it may seem pleasant at first, but as more and more of the stuff is shovelled into your mouth – continually refusing to be swallowed until long after it has outstayed its welcome – it just gets annoying. We have heard boomier basshead sets with poorer low-end management, but when the Solo HD cost well over £100, we have a right to expect more. 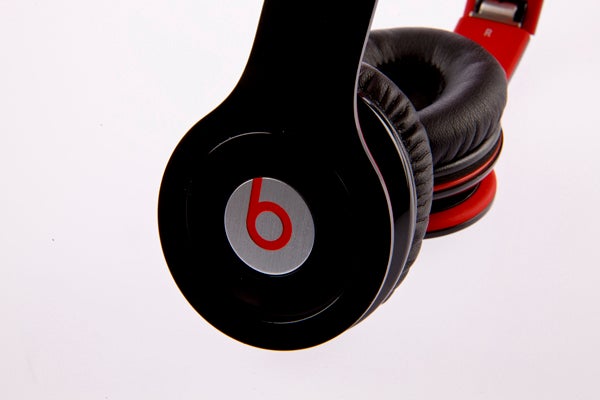 Top-end detail and resolution are significantly improved over the very poor efforts of the Beats Solo, but the sound is nevertheless unbalanced. Clarity remains mediocre. It’s telling that when listening to spoken-word recordings, voices are often reduced to a bassy burble, as if they are talking through a thin plywood wall.

It is possible to try and defend the Beats Solo HD’s bass-centric tone by claiming genre specificity – that they excel with bass-heavy music. However, the opposite is true, acting as a catalyst for their sonic dysfunction. 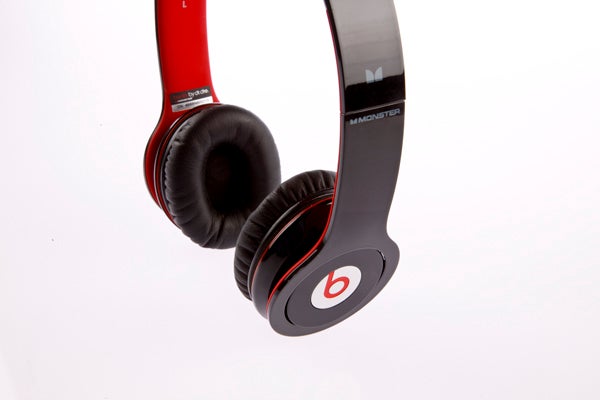 What’s doubly annoying about the Beats Solo HD’s muddled, veiled sound is that a large part of it is down to tuning. They likely use 40mm drivers similar to the best at the price, but the skewed sound signature ruins their chances of approaching their performance.

Not that this has adversely affected sales, mind. A strong brand and great design has made the Solo HD into one of the most popular sets of headphones around, but we’d advise considering the cheaper Philips O’Neill pair or the Sony MDR-ZX700, which offer far superior clarity for around half the price.

Realising quite how poor the original Solo headphones sounded for their money, Monster has improved sound in the Beats HD. However, it hasn’t done nearly enough. An attractive design offering good comfort can’t hide that their muddy sound cannot be justified at the price.