Available on Xbox 360, PS3, Xbox One, PS4 (reviewed)
The 3rd Street Saints have come a long way. Originally the hoodlum stars of a GTA knock-off, they’re now the heroes of a successful franchise with its own personality and masses of popular appeal. Each new chapter seems to see the Saints move even further away from their street crime roots, and the shift is always for the better. It’s no coincidence that the best game in the series, Saints Row 4, was the one that made the Saints the super-powered last bastion of humanity in a battle against alien enslavement. The only problem? After you’ve gone that far, where on Earth do you go next? Once your hero has conquered not just America but the known universe, where is there left to go? Well, to hell appears to be the answer, with a stand-alone expansion that takes the Saints’ brand of mayhem to the fiery furnaces below.

Saints Row IV began as a stand-alone expansion to Saint’s Row: The Third, reskinning and reworking Stillwater to make it a playground for alien-battling superheroics, and Gat Out of Hell repeats much the same trick. Urban decay gives way to the textures of the inferno, pedestrians become the shambling husks of the damned, while your old Zin overlords have been replaced with a cast of generic hellspawn. Superpowers, meanwhile, become a range of demonic abilities, as our protagonists sweep through the air on lucifer’s wings, speed along the ground at 90mph and lay the smackdown with the aid of new powers. Titanic stomps, vicious imp minions, ice-cold flames and turn-to-stone projectiles can all turn a battle in your favour, and while the action is all much the same beneath a thin veneer, it’s just different enough to keep your interest. 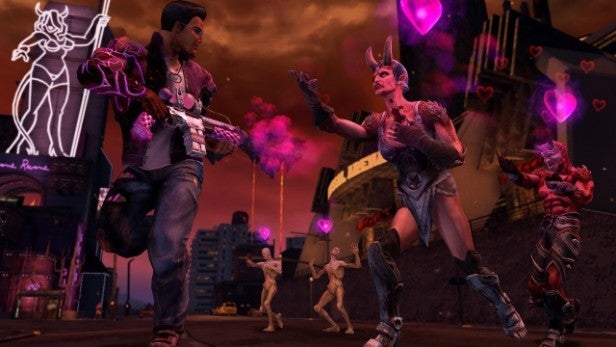 Of course, you’re no longer playing the boss, but one of his/her lieutenants – either everyone’s favourite trigger-happy psycho, Johnny Gat, or the series big geek heroine, Kinzie Kensington. Satan has kidnapped the Boss with plans to marry him off to his daughter, Jezebel. Johnny and Kinzie have broken into hell with the intention of getting him back. The plot is certainly sketchy and possibly non-existent, but saving the boss means getting Satan’s full attention, which involves scoring points with Satan’s disgruntled minions, and causing enough carnage on the streets of Hell that the lord of darkness has no choice but to enter the fray.

Gat Out of Hell is not a campaign of great storytelling or imaginative missions. Instead, it’s one big grab-bag of activities through which you can impress your allies and make Satan’s life awkward. The vast majority echo activities you’ll remember from Saints Row to Saint’s Row IV, and if you’ve had your fill of checkpoint races, mayhem challenges and insurance fraud, then you might find parts a little too familiar. Flight gives some activities a little extra zing, with the checkpoint races now tests of turning, gaining air and gliding, while one of the rare, brand new activities involves saving souls as they fall to the ground or rise into the sky. Overall, though, you’re effectively completing a handful of activities, several times over, with only your mission-giver and the scenery really changing. 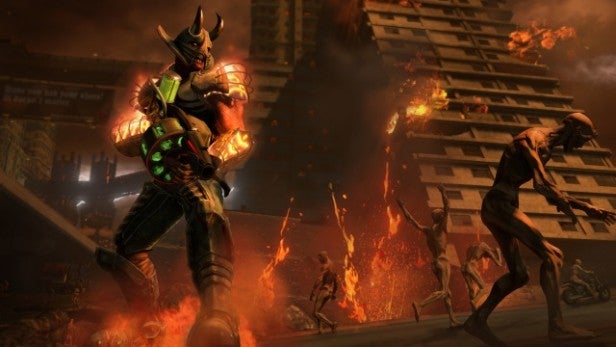 That scenery is not amongst Gat Out of Hell’s strong points. It would be unfair to describe this campaign as ugly, but beyond the cartoon character design the underworld is an unsightly mess. It’s hard to remember a vision of hell as pedestrian, badly-textured and unimaginatively conceived as this one, with flat lighting, dull, boxy architecture and some appalling-looking denizens.  Even running on the mighty PS4, Gat Out of Hell can look like an early PS3 game. Given how good the likes of GTA 5 and Watch Dogs look on next-gen hardware, that’s extremely disappointing.

If the graphics are looking rusty, then the same goes for many of the key game mechanics. Third-person combat is mostly a question of dashing around, blasting mindlessly and hovering up health boosts as they drop. The powers and their upgrades add some interest, but it’s surprising how quickly you settle on a few old faithfuls and leave the rest to gather dust. Where a better game would have you matching powers to the vulnerabilities of monsters, this game’s efforts in that direction just don’t pay off. 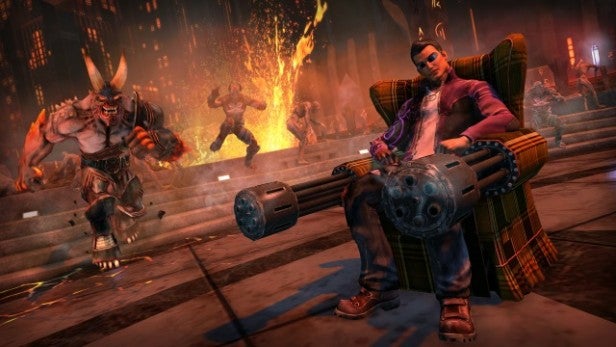 Other elements show a lack of party spirit. Hell has some great weapons on offer, with frog-spewing grenade launchers and minigun armchairs, but there’s very little you can do to make your heroes more exciting or distinctive. Where are the costumes and the customisation options we know and love? The cumulative effect of all this stuff is to render Gat Out of Hell a little scratchy and generic. You might like it while you’re playing it, but nothing really sticks in the mind.

What just about saves Gat Out of Hell is personality. It’s neither as funny and charming as Saint’s Row IV nor half as amusing as it thinks it is, but the main characters are likable, there are some good jokes scattered through the game and its few cut scenes win it some much needed points. And while the game’s tropes are getting tired and the slapstick violence is wearing thin, the action still works more often than not. You might spend the first hour thinking ‘Blimey, this is a mess’, but there’s still something infectious about all this nonsense; something that can’t help but suck you in. 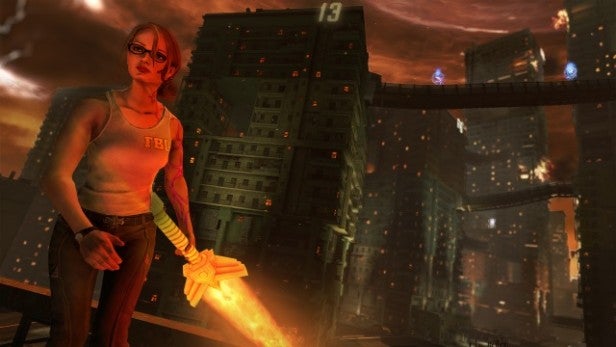 Buy Gat Out of Hell, then, if you loved Saints Row IV and you’re happy with more of the same. If you’re new to the series, don’t bother; Saints Row IV is by far the better place to start. PS4 and Xbox One owners get both at the same time, of course, with the new Saints Row IV: Re-Elected/Gat Out of Hell set, but given that what visual enhancements there are in the next-gen versions are – how could we put this diplomatically? – subtle, we wouldn’t recommend anyone buy it who’s played it already.

That just leaves those looking for a new Saints Row experience. Well, they can safely leave Gat and co. to rot down below. This expansion is a fun diversion for a handful of hours, but too slight and unambitious to be anything more.

Verdict
Where Saints Row IV earned a promotion from expansion to sequel through an explosion of fun and interesting ideas, Gat Out of Hell feels more like leftovers than a brand new experience. The action can be entertaining and the fun infectious, but there’s a lot of familiar content here, and Hell itself is a drab place to explore. If you love Saints Row and want more of the same, this expansion delivers, but most gamers will find more than enough Saints Row goodness in Saints Row IV.