Available on Xbox 360, PS3 (reviewed), PC
The further Saints Row gets away from both reality and Grand Theft Auto, the better it gets. The first was a mediocre GTA clone saved by a brilliant strain of frat-boy humour. The second was the same, but less inspired, less interesting, less polished. With Saints Row: The Third the series finally found its own identity: one that majored on parody and adolescent humour to the exclusion of almost everything else. It was so ridiculous and so offensive that it was equally ridiculous to be offended by it, though missions involving killer prostitutes and sex trafficking might have tempted you to try. Provided you were happy to play a game that confirmed every mainstream media cliché about the interests, ethics and IQ of the average gamer, Saints Row: The Third was brilliant fun. 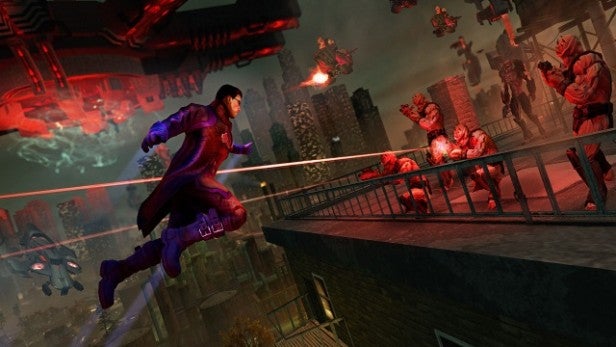 Saints Row 4 is even better. Reality has now been thrown clean out of the window and the GTA influence has now been replaced by, well, the influence of just about everything else. Saints Row 4 is part open-world crime caper, part superhero game and part third-person shooter, with nods to everything from Halo to Prototype to Mass Effect. It’s both impressively smart and wantonly dumb, as you might expect from any game that finds common ground between The Matrix, Scarface, South Park and Inception. It’s hard to believe that it works, yet it does.

Saints Row IV sets its stall from the off, with a bravura opening sequence that sees The Third Street Saints, heroically led by your good self, fighting to destroy a nuclear missile before it can hit US soil. Before you know it, your protagonist is the President and the world is at your feet. The good times can’t last, and they don’t. Aliens attack the white house and imprison you and the surviving members of the human race in a Matrix-like virtual Steelport. This you escape, with the aid of ex-FBI agent Kinzie Kensington, and begin a campaign of subversion, attacking the construct from within while trying to rescue the remaining Saints from without. 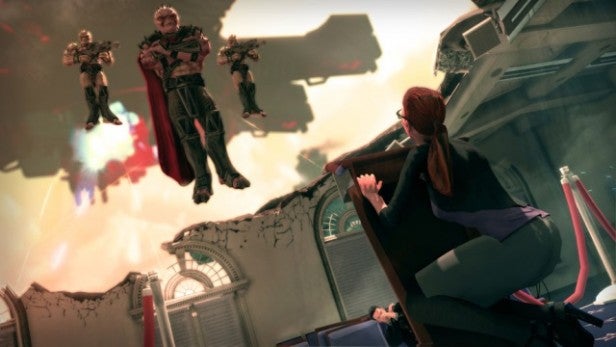 This disruption includes a whole range of activities. You might be asked to destroy alien strongholds, or conquer alien towers. You might take to the streets with a range of overpowered weaponry and cause as much mayhem as you can, or you might simply hurl yourself over and over again into oncoming traffic for points. You could be hacking stores and infiltrating alien facilities one minute, and wrecking your way through waves of killer robots the next. Occasionally there are more narrative-led story missions, which have you chasing down and attacking specific targets or rescuing one of the gang. 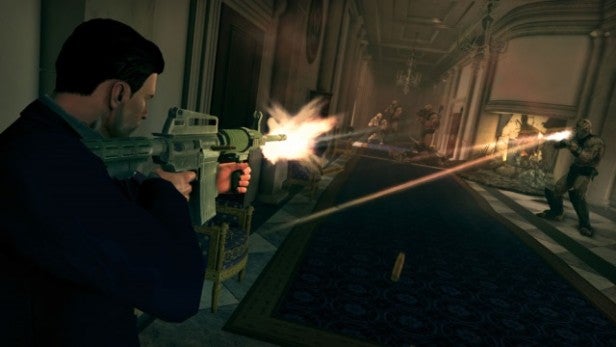 What really makes the difference is that this time you’re doing it with superpowers. Thanks to a combination of Kinzie’s hacking prowess and vulnerabilities in the alien computers, you can run faster than most cars can drive, bound your way up and over buildings and freeze your enemies with elemental blasts. Earn upgrades through missions and collect glowing data clusters, and you’ll find yourself running up skyscrapers, gliding from the rooftops, sending shockwaves through the ground and picking up trucks and throwing them around. In this respect Saints Row 4 is the bastard child of Crackdown and inFamous, but hyper-charged and played for laughs.

Somehow it all comes together.
The Matrix-like setting makes for a world where morality is
inconsequential, and where you’re free to cause as much carnage as you
like. The superpowers then make that carnage more chaotic and
spectacular than they’ve ever been before. Saints Row 4 is a game that
doesn’t just let you indulge every daft power fantasy that you might
have, but comes up with a few new ones you probably have never thought
of. It turns out that black hole guns and explosive alien weaponry cause
a lot more damage than conventional arms, and that a speeding
superhuman with a wobbling tentacle bat can take out armies of alien
cops if they set their tiny mind to it. This, it turns out, is a whole
heap of chuckles. 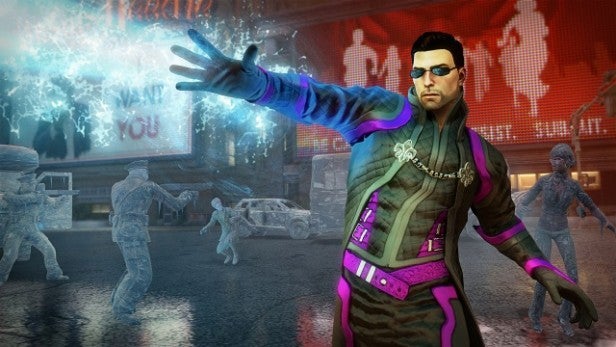 Needless
to say, it can be painfully juvenile. Even this level of mayhem can be
repetitive at length, and Saints Row 4 has a tiresome habit of mixing
the mundane with the magnificent, throwing in missions that focus more
on gunplay than superheroics, or forcing you to customise cars and buy
ammo when you’d rather be leaping over tall buildings and laying the
smack-down on the alien scum. But there are some really brilliant
touches here, ranging from ingenious parodies of Splinter Cell and Mass
Effect to fourth-wall shattering gags.

Even the character
creation screen is in the right spirit, enabling crazy combinations of
movie star styles and period fashions, and a choice of voices that
covers east-end tough-guy British and the inimitable Nolan North. Saints
Row 4 knows that having the voice of Uncharted’s Nathan Drake dish out
potty-mouthed epithets is funny in and of itself, and that the right
cheesy nineties hit can be the perfect soundtrack for that big cinematic
moment. If nothing else, Saints Row 4 has a cracking soundtrack. 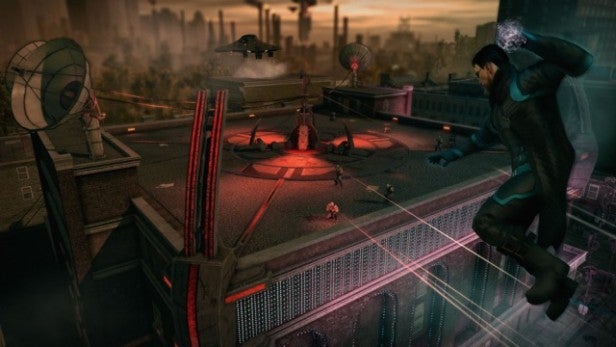 Let’s
not get too carried away, though. Some of Saints Row’s biggest issues
still remain. These include an urban setting that’s nowhere near as
distinctive or believable as those you’ll find in other open-world
games, and a population that’s little more than a delivery mechanism for
a stream of weak side-gags. It’s easy to believe that Virtual Steelport
is a construct, because nothing about it seems atmospheric or real.
There’s also a tendency in later stages to confuse making a game more
challenging with simply throwing on more enemies and making them
ridiculously tough. It doesn’t. It just makes the odd mission
infuriating.

Perhaps more worryingly, Saints Row 4’s engine seems
to have improved little – if at all – since Saints Row: The Third,
which wasn’t exactly cutting-edge. With its washy textures, overplayed,
red-heavy lighting and dated effects, Saints Row 4 is a long way behind
inFamous 2, Assassin’s Creed 3 or Sleeping Dogs when it comes to
graphics, and with GTA 5
and next-gen games on the horizon this problem isn’t going to go away.
Now, graphics aren’t everything, and we’d always rather have a game that
played well over one that just looked good, but all the same – Saints
Row 4 really doesn’t cut the mustard. 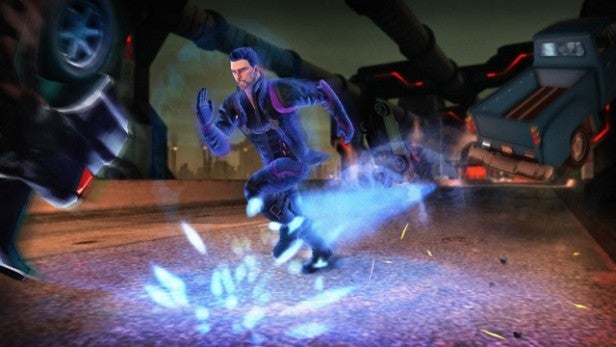 This
is a shame, and if you stripped away the humour and the super-powered
mayhem Saints Row 4 would be a thoroughly mediocre game. Yet with both
in play it’s nigh-unstoppable. Whatever stick you use to beat this game,
and whatever accusations you can level at it, it’s a riot – and we mean
that in the best possible way, if not the best possible taste.

Verdict
We
can turn a blind eye to the various technical and gameplay faults of
Saints Row 4 because it’s the game that’s just too much fun to hate. No
game has ever worked so hard to deliver so many stupid gags and
shameless parodies or so much wince-inducing mayhem, and if it strays
close to being the Scary Movie of video games, then at least it’s funny
99% of the time. You might not like it, and you might not like to admit
it, but Saints Row 4 is the first Saints Row that’s as entertaining as
it thinks it is. Only the most po-faced gamer would deny it its moment
in the sun.