Sackboy: A Big Adventure is a perfect launch title for the PS5. It’s gorgeous, experimental and accessible to all manners of players. Despite its easy going nature, there’s still a solid platformer here that is absolutely bursting with clever ideas. It's a whimsical affair that ticks all of the boxes you'd expect while adding a decent dose of surprises into the mix, which was more than enough to hold my attention across its selection of alluring worlds.

LittleBigPlanet has faded into obscurity in recent years, not having nearly the impact it held back on the PlayStation 3 when Media Molecule was at the helm. The mantra of Play, Create, Share went on to define a generation, and for good reason.

Now, Sackboy returns in a titular platformer from Sumo Digital that is built to take advantage of the PS5. It doesn’t melt your retinas like the brilliant Marvel’s Spider-Man: Miles Morales or fiendishly challenging Demon’s Souls, but it remains a charming little adventure packed with clever ideas.

Sony has always ensured that each console launch is accompanied by an engaging platformer, and this one is no different. Sackboy: A Big Adventure is a delightful adventure that pulls you into a crafted world awash with surprises, putting the DualSense controller and 3D Audio to creative use on the new console. 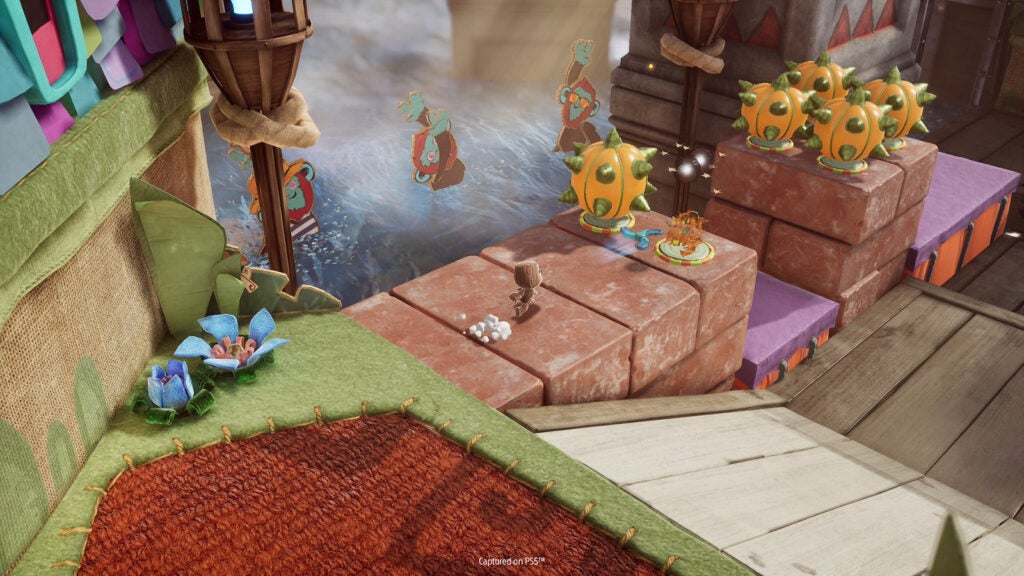 Unlike the trilogy of games that inspired it, Sackboy: A Big Adventure is a more traditional outing that puts player creation onto the backburner, instead opting for a level-based approach across five distinct worlds. You play as Sackboy, who must embark on an epic pilgrimage when an evil mastermind destroys his hometown and kidnaps his friends, enslaving them to rebuild CraftWorld is his own image.

It’s a playful premise with a minimal amount of threat, meaning young players will be able to jump into this without parents worrying. After the world is torn apart, Sackboy is tasked with restoring his homeland to its former glory by venturing across the land to stop all evildoers in his path. It’s a smashing little opening that thrusts you right into the action. Sumo Digital has created a platformer that sticks stringently to genre conventions, an approach that is definitely to its benefit.

Each world is a stellar display of creativity, piecing together vast environments with all manner of arts and craft materials you’d find in an average hobby shop. Snow is a mixture of shredded paper and glitter, while all of your enemies are a chaotic combination of card, metal and googly eyes marching towards you with untold aggression. They’re dispatched with a simple felt slap or a courageous bump on the head, so the world of Sackboy: A Big Adventure never feels too daunting. 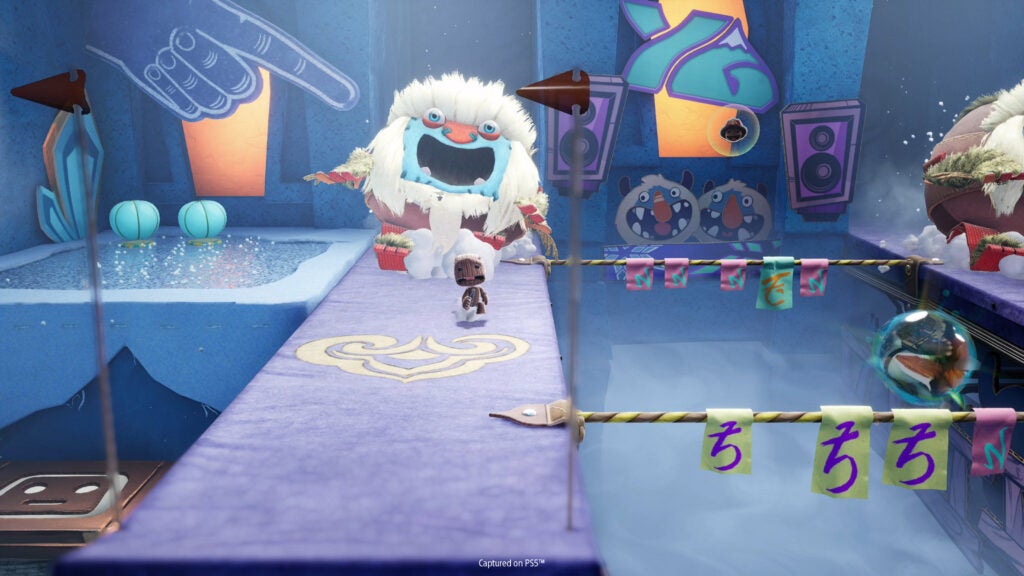 Cardboard cutouts of random animals and other creatures will spring from the background as you explore each level, producing adorable yelps of confidence as they cheer you towards the finish line. Many levels will take speed into account, forcing you to tackle obstacles and mount platforms before you’re left behind by the frenetic pace of things. The presence of such stunning art direction turns a hectic situation into one that feels bright and exuberant. Each new stage brought with it a new surprise, even if its fairly standard fare.

The hub worlds range from exotic jungles to otherworldly planets, all of which are visually distinct and sport their own twist on mechanics. In the jungle I found a boomerang which could slice through fauna to open the way forward, while the galactic world plays around with gravity for more outlandish jumps and experimental platforming. My personal favourite are stages where you’re moving alongside a vehicle, trying desperately to pick up collectibles and score orbs before being left in the dust.

Each level tasks you with collecting hidden blue orbs which will open a path to new areas, all of which are hidden nefariously enough that seeking them out is a welcome reward. You’ll also earn a sticker for your troubles, which is stuffed into a gorgeous scrapbook once you’re back in the hub world. Levels are short and sweet, which makes diving back in to uncover leftover goodies a breeze, and the excellent local multiplayer only makes such a process all the sweeter. 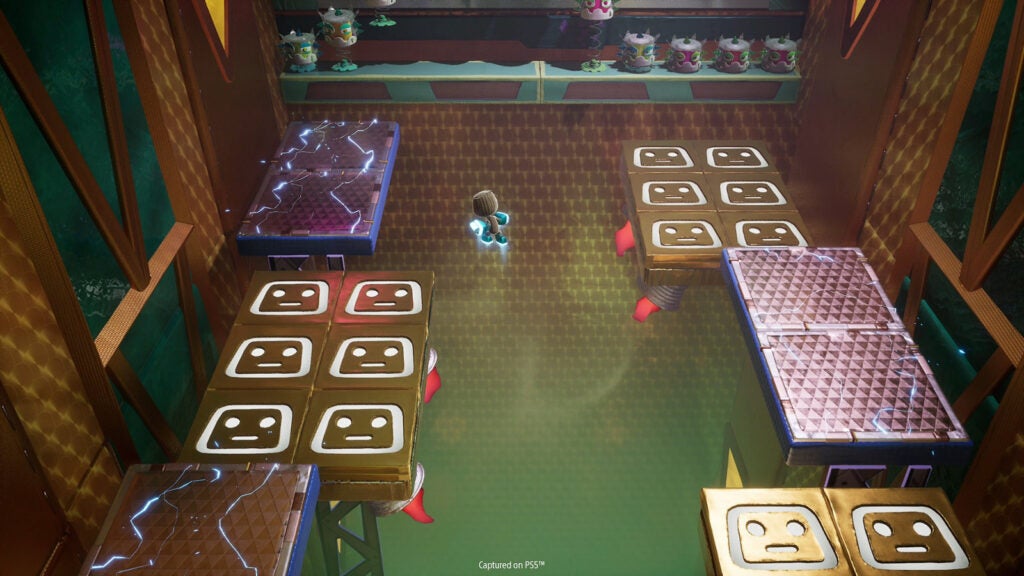 Sackboy: A Adventure can be played with a maximum of four different players, and jumping into the action is made possible simply by attaching another DualSense controller and pressing a button. Sumo Digital has made it possible for each player to customise their outfits and overall look, so there’s little chance of confusing yourself with friends amidst all the action.

Certain levels are designed with multiplayer in mind, requiring a fellow sackperson by your side to figure out puzzles and deal with baddies. These are engaging little excursions, although are sporadic enough that those playing on their lonesome won’t feel like they’re missing out. Couch co-op isn’t very common nowadays, so it’s lovely to see a next-gen title embrace it so openly.

The undeniable highlight of this platformer are its splendid musical levels. Taking an obvious cue from Rayman Legends, these stages are based entirely around a specific song. Bruno Mars’ Uptown Funk and Kool and The Gang’s Jungle Boogie are two early examples, and they’re positively splendid. Surfaces you can mount pop from the ground along with the beat, while song lyrics cause a cacophony of characters to wiggle from the woodwork with unparalleled glee. 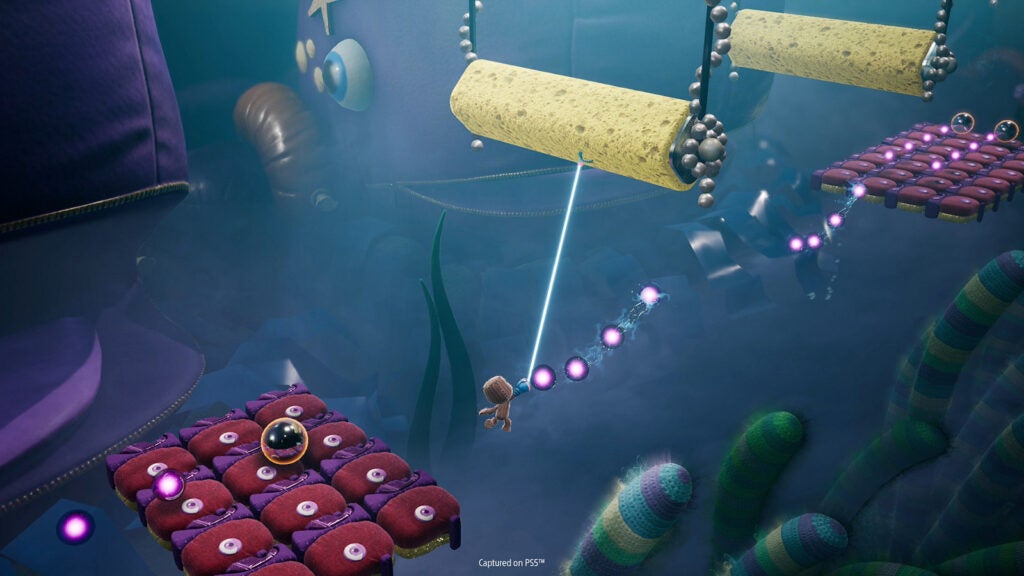 Musical stages are few and far between so that when they do surface it’s like an unparalleled treat. One of my only complaints is that those who seek out collectibles will long outlast the lyrics of each song, and they only kick back into rhythm once you’ve reached a checkpoint. As a result, you will be awkwardly jumping along to an instrumental track instead of bopping to some banging vocals. It’s a weird detriment to the pacing, but the higher moments still managed to soar beyond my wildest expectations.

The gender binary holds no control over Sackboy, a sentiment which is expressed through the nuanced customisation system. Much like LittleBigPlanet, different items of clothing, fabric and other accesories can be found throughout each level. Once unlocked, you can visit a vendor and mix things upon however you like. Each hub world has its own set of themed costumes to purchase, or you can throw convention to the wind and dress however you like. I opted for a Little Red Riding Hood with a bull’s tail and tiger’s eye. I was down for a picnic, but could always kick your ass if I needed to.

Sackboy: A Big Adventure is a perfect launch title for the PS5. It’s gorgeous, experimental and accessible to all manners of players. Despite its easy going nature, there’s still a solid platformer here that is absolutely bursting with clever ideas. It’s a whimsical affair that ticks all of the boxes you’d expect while adding a decent dose of surprises into the mix, which was more than enough to hold my attention across its selection of alluring worlds.