RIGS is in many ways the perfect PlayStation VR launch title. Combining the action of an arena FPS with the aesthetic of a sports game, this mech-‘em-up boasts stunning graphics and a brilliant sense of presence, all while offering fast paced multiplayer in full VR. Yet what truly makes RIGS the perfect PSVR launch title is that it embodies everything most VR experiences have been to date – unique and exciting but disappointingly half-baked.

Still, as first impressions go, RIGS makes a fairly convincing one. Developed by Guerilla Games of Killzone fame, the Cambridge-dwelling wizards waste no time in proving that it is still the master when it comes to Sony’s hardware. Upon booting the game, RIGS’ logo segways into a gorgeously animated intro where you find yourself surrounded by a slew of  hulking, stunningly detailed mechs, running, sliding and soaring their way around you in slow motion.

What are the best PlayStation VR games? Let’s find out:

Brimming with colour, detail and without a jagged edge in sight it’s a terrific technical showcase for PSVR and a perfect introduction to RIGS, bypassing dull loading screens and leaving you hungry to bash some bots. Unfortunately, thanks to a lengthy tutorial it’ll be a good half an hour before you actually take control of one. 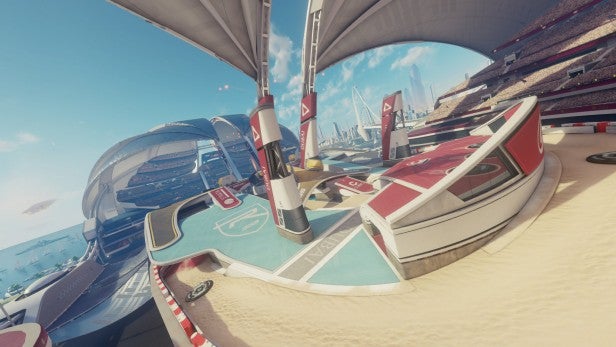 Introducing you to your imaginatively named mentor, ‘Chief’, the tutorial starts with you standing in the wonderfully detailed RIGS HQ. While Chief enthusiastically explains the basics of the Mechanized Combat League I impatiently look around, spying a team of excited workers testing a new prototype. Guerilla Games understand that in VR it’s all about the little things and this attention to detail permeates every aspect of RIGS, adding to the feeling of inhabiting another world. In another nice touch the four main types of suits are only introduced if you choose to glance at them while walking through the hangar and into the arena.

After twenty minutes of Chief demanding you chase orbs and shoot targets, I’m finally free to actually play the game. With combat demanding fast reflexes and requiring you to both turn and aim with your head, it can be pretty daunting. While immersive, this control scheme will definitely leave you feeling a bit nauseous if you’re unaccustomed to intensive virtual reality experiences. Sensibly then, RIGS offers a fairly comprehensive list of different comfort settings. Here you can choose to relegate the head tracking camera to the right analogue stick and even lessen the intensity of the jarring eject animation that propels you into the air after every death. Still, despite these changes, after extensive testing I can confirm that this is definitely not a game you want to be playing hungover. 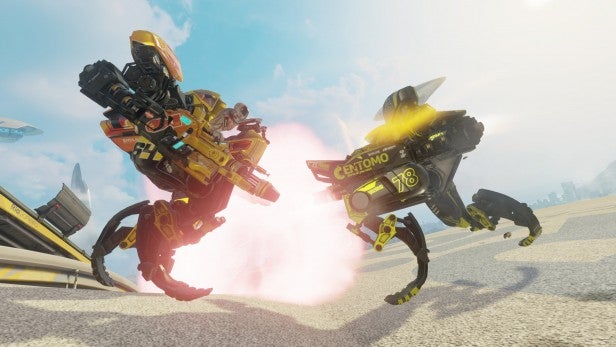 Thankfully, I got used to RIGS’ intensity fairly quickly, opting to stick with the full head tracking like the metallic warrior that I am. After a few practice matches I was rushing around arenas destroying opponents with careful precision, shaking my headset from side to side like a Daft Punk backing dancer.

Encased in a cockpit and sending bullets towards foes with a turn of my head is a grin inducing experience and the first time the combat clicks it’s a glorious reminder of VR’s potential. It’s not all shooting though, as no matter which mech you’re piloting, in order to survive you’ll be constantly switching between three different power modes: Turbo, Repair and Impact.

Turbo mode increases speed, allowing you to zip around the arena towards the enemy or an objective, Repair does what it says on the tin, allowing the rig to patch up war wounds. Impact mode increases damage output at the sacrifice of speed. Swapping between these on the fly is a fun and interesting mechanic that helps add a welcome layer of strategy to proceedings – is it worth sprinting closer to the enemy or holding back and dealing more damage? Luckily if you manage to get three kills in a row, you unlock Overdrive, triggering all three power modes at once for a short time.

It’s a shame then, that a disappointing selection of maps and modes means everything soon becomes repetitive.

Offering only three modes and four maps, RIGS sees you felling foes in single player and online multiplayer as you earn credits, fame and sponsorships based on performance – using these to unlock new RIGS and custom gear. Each mode sees two teams of three duking it out in multi-tiered arenas, but with fairly different objectives. Team Takedown is classic team deathmatch, with each side battling for the most kills. Endzone plays out like Robot Wars meets American Football with teams wrestling over control of a ball and then speedily delivering it into the opposing team’s goal. 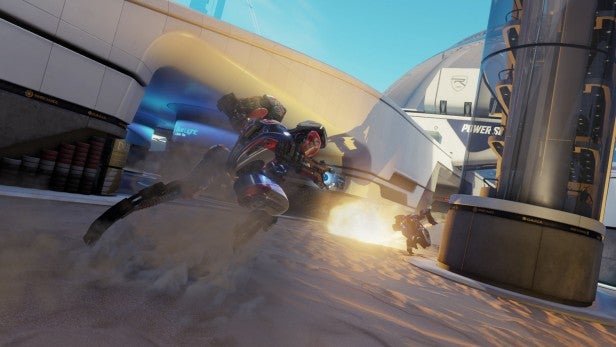 In the game’s third and final mode; Power Slam, you have to rack up enough kills to trigger Overdrive and jump into a big ring in the centre before getting destroyed. Each mode has it’s quirks and maps are all beautifully detailed, yet matchmaking often takes an age so you’re left repeating the same matches over and over against increasingly difficult AI in the single player leagues.

Thankfully, a wide variety of mechs keep this game from feeling like a complete rip-off. Choosing from four basic types of mech – Hunter, Sentinel, Mirage and Tempest, you can unlock six different variations of each, all outfitted with a unique combination of two weapons and one of four different abilities. Weapons range from heavy machine guns, pulse weapons and even warheads, with one weapon assigned to each trigger.  These new mechs and rider customisations provide the main incentive to carry on playing, but sadly the experience will most likely wear a little thin long before you’ve unlocked all the RIGS available.

RIGS proves that a fast paced multiplayer FPS can be done in VR. It pushes graphical boundaries and creates an impressive sense of presence, in many ways, showcasing the medium’s glorious potential. It’s also a lot of fun to play, if your stomach can handle it.

Yet with only four maps and three modes on offer here, like much of PSVR’s initial experiences, RIGS feels like the perfecting starting point for a great game that was never finished.

If you have the cash and are looking for a great looking shooter that shows off  your shiny new headset, then you could do far worse than RIGS – just don’t expect the fun to last.