Despite the pocket Internet camcorder format being around for a few years now, mainstream manufacturers have been reluctant to take it seriously. JVC has released a small range, starting with the PICSIO GC-FM1, and more recently the PICSIO GC-FM2 and PICSIO GC-WP10A. But Panasonic and Canon have remained aloof. Now, Sony is making a play to lead the market with its Bloggie Touch. Not only is this a sleek and capable Full HD pocket Internet camcorder, it also has a unique trick up its sleeve – 360-degree recording.

The Bloggie Touch isn’t actually Sony’s first foray into pocket Internet camcorders. The original Bloggie arrived at the beginning of 2010, and there was a Webbie a year before that. However, the design has really come of age with the Bloggie Touch. The chassis is sleek and smooth, making even Flip’s Mino look chubby in comparison. Aside from the power button and a physical camera button, all the settings and functions are controlled using a sharp and colourful 3in touchscreen TFT. This has a 288Kpixel resolution, which is quite reasonable by camcorder standards.


Sony certainly hasn’t skimped on the internals of the Bloggie Touch, either. Inside is a sizeable 1/2.5in CMOS sensor with Exmor technology. This is Sony’s version of back-side illumination technology, where the sensor wiring grid is placed behind the pixels rather than in front of it, increasing the useful area of each pixel. The result is much greater sensitivity, which we have certainly noticed in the lowlight performance of cameras equipped with the technology.

The CMOS sensor also offers an effective 12.8-megapixels when in 4:3 digital camera mode, so can capture still images at a native resolution of up to 4,128 x 3,095, although only 2.07-megapixels are used when shooting video. Its tiny lens holds its photography abilities back, but quality is certainly a cut above camera phones. As we mentioned earlier, the Bloggie Touch can record video at a Full HD resolution of 1,920 x 1,080 pixels. It also offers 720p, but not VGA. Note, however, that despite being on sale in Europe the Bloggie Touch still uses the 30 frames/sec base found in the US and Japan. There is also a 60 frames/sec option, but only at 720p resolution.


Video is recorded in MP4 format, and there’s 8GB of flash memory built in. At the top Full HD quality setting, this is enough for around 85 minutes of footage. However, there’s no option to expand this with external memory cards.

As with every other pocket Internet camcorder, features are few and far between. In fact, the Bloggie Touch is even less well endowed in this respect than some of its competitors, particularly JVC’s PICSIO GC-FM2. The only options you have other than changing the shooting resolution are a timer, so you can take self-portraits, and a zoom. The latter provides a 4x factor, but is digital rather than optical, so will reduce image quality when used. The Bloggie Touch also has face detection, although this is permanently on. Sony’s SteadyShot image stabilisation is on hand as well, which is also a digital rather than optical system, but one of the best in its class from our previous experience. 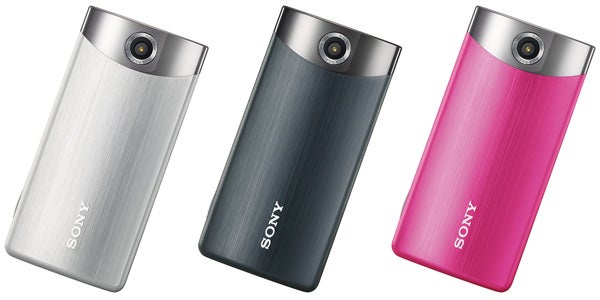 The arrangement of the Bloggie’s onscreen controls makes it easier to use in portrait mode. However, although there is an accelerometer on hand to flip the screen orientation when you switch to landscape mode, the latter is actually the orientation you need to use when shooting video. Otherwise, you end up with tall, thin video instead of widescreen, which isn’t going to be very useful. 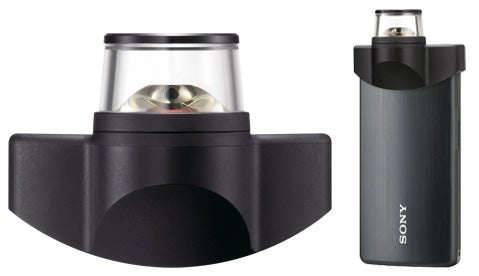 But the Bloggie Touch’s headline feature is of course its 360-degree shooting. This is a feature Sony launched with the original Bloggie, but there is still no other major manufacturer offering a similar feature. The 360-degree shooting is provided by an add-on, which is bundled with the camcorder. This attachment, which comes in its own protective box, simply slips onto the top of the Bloggie Touch, held in place by a magnetic system.

The 360 shooting is the kind of feature that is sure to grab attention the first few times you use it, with people asking what the strange device in your hand is actually doing. However, you’re not going to be able to display the footage very often. In the same way as 3D camcorders generally record two images squashed side-by-side to fit into a single frame, the Bloggie Touch’s 360 video is actually grabbed as a strange-looking disc within an otherwise blank frame. You need supporting software to translate this into something useful.

Fortunately, as the Bloggie Touch is a pocket Internet camcorder, it has a pop-out USB 2.0 plug and the necessary software built in. The app included is just called Bloggie, and is fairly limited. It can upload photos to Facebook and Flickr, and videos to Facebook and YouTube, but it doesn’t have any editing ability. There is one unique feature, though. Double click on a 360-degree video and this loads into a special player. Here, you can pan round the panorama, so the frame is centred on the point of your choosing with the rest of the view either side in a strip. You can then choose to output a WMV, which converts the 360-degree shot to a strip with your chosen point at its centre. The Bloggie also has a mini-HDMI connection, but pipe this to your TV and all you will see is the strange disc, only bigger. 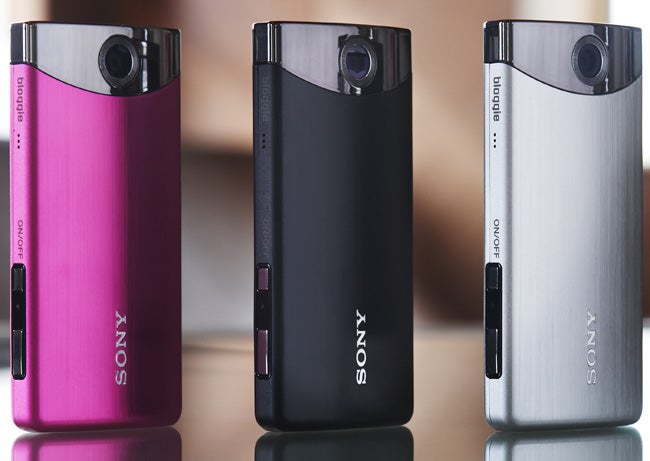 When shooting in regular 2D mode, the Bloggie Touch performs commendably. The image is colourful and offers plenty of detail, although the lack of an optical zoom means your framing options are limited. Low light abilities are particularly impressive, although this is an area where pocket Internet camcorders usually punch above their price. Whilst colours do become muted as the illumination drops, there is little evidence of grain and the image remains bright to quite low levels of light. The large sensor and Sony’s Exmor technology are clearly paying dividends here, as the Bloggie Touch is top of its class in poor illumination, and easily up to the task of grabbing footage in badly lit indoor conditions – a likely situation for a camcorder that easily slips into a pocket.


Now that more and more phones are offering video recording at HD resolutions, with Internet upload abilities built in, the writing would appear to be on the wall for pocket Internet camcorders such as the Bloggie Touch.


However, Sony has still managed to give it some features that could lure you away. For a start, the much larger sensor means image quality in low light will be significantly better. But the 360-degree attachment is also unique. This may be an expensive proposition for a pocket Internet camcorder, but it performs the task well, and the wraparound shots add an extra layer of fun.