Arcade Racers are a dime a dozen when it comes to the modern racing game landscape.

That’s why RGX Showdown, touted to be from the same creators as Burnout and Split/Second, has so much promise. However, do not expect the breadth of features of polish that Burnout has as RGX Showdown is at best, a shonky imitator. In its finest moments however, it shines.

RGX Showdown is built around the basic premise of an hourly tournament bracket, where you will automatically be matched up against other players to participate in a mini-bracket, where you will be able to earn points to upgrade your car, and also earn new ones, should you win the entire bracket. However, the likelihood of getting into a race with another player is dubious at best, and the matchmaking process can take a lot longer than needed, which is most likely due to the lack of players online. If the game cannot find other players, you are pitted against AI opponents, disguised as real people, avatars and all.

Navigating the menus in RGX Showdown is a little bit of a nightmare. Between loading up the game and getting into a tournament, then a race takes much longer than is necessary, with frequent loading times being a massive hindrance to my enjoyment of the game. Additionally, there is a frequent voice-over to almost every action you perform in the game, which starts to become grating very quickly. However, once you’re actually on a track and starting to race, the talent of the development team starts to shine. 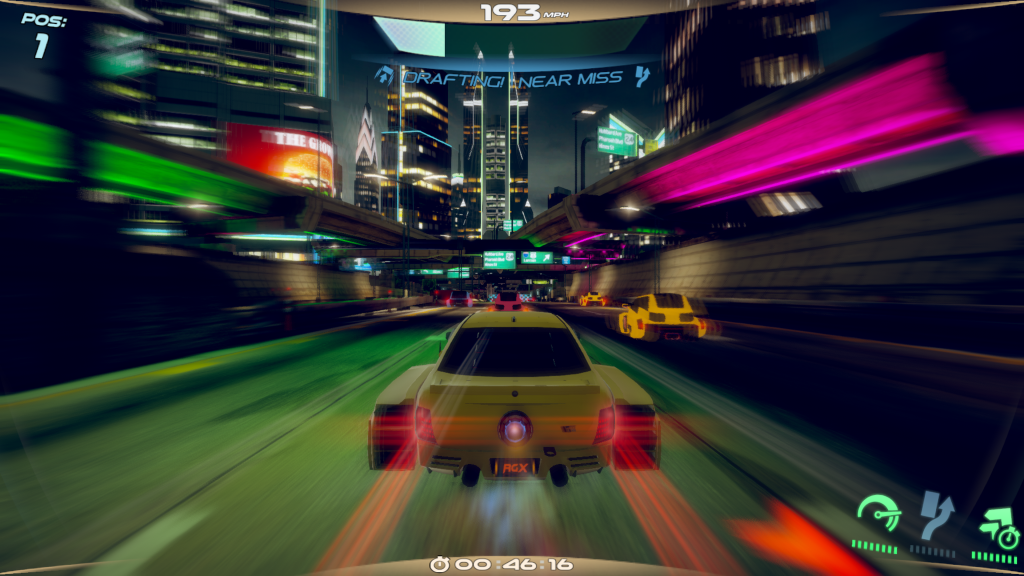 With a Wipeout-esque aesthetic and racing at immensely high speed, it’s easy to get hooked onto the intensity of the short races. With a boost meter charging as you start the game, you are able to kick off the race using your boosts, which give you an edge very early on. The tracks that you race on are all populated by traffic, which, while moving at high speed, means that you have to have a keen control on your acceleration, breaking and feathering your turns precisely in order to not get taken out by slow moving traffic.

While this might not sound too bad, the irritating voice-over once again rears its head back at you, exclaiming something that might as well be “Oh no” when you crash into a car. During the player on-boarding process and getting to grips with the game, you will be crashing into the back of cars pretty often, meaning that the voice-over gets even more irritating when you’re just getting to grips with the game’s controls, taunting you with repeated chiding as you’re trying to rewire your brain to work at 150 miles per hour.

Steering feels tight, and the short races are the best thing about RGX Showdown, with races coming in at around 1 minute. This burst of intense concentration and gameplay makes RGX Showdown an easy game to pick up and play (once you actually get into a race). However the lack of different aesthetics to the track make it get repetitive quickly. There are no difficult turns, or indeed much variety at all in the races, which once again makes the game grate on you very easily.

However, once you actually manage to win one of the hourly tournaments, and begin to tune up your vehicle and earn new ones, you start to see the throughline for RGX Showdown’s player progression, which is aided by a point modifier as you progress through the hourly brackets. The car modifications every hour are reset, meaning that you are able to kit out your car and tune up for a specific strategy every hour, which can be likened to a similar, almost rogue-like approach to car modification as you go for every “run” to get into the top tier of the brackets and earn a car of a higher class. 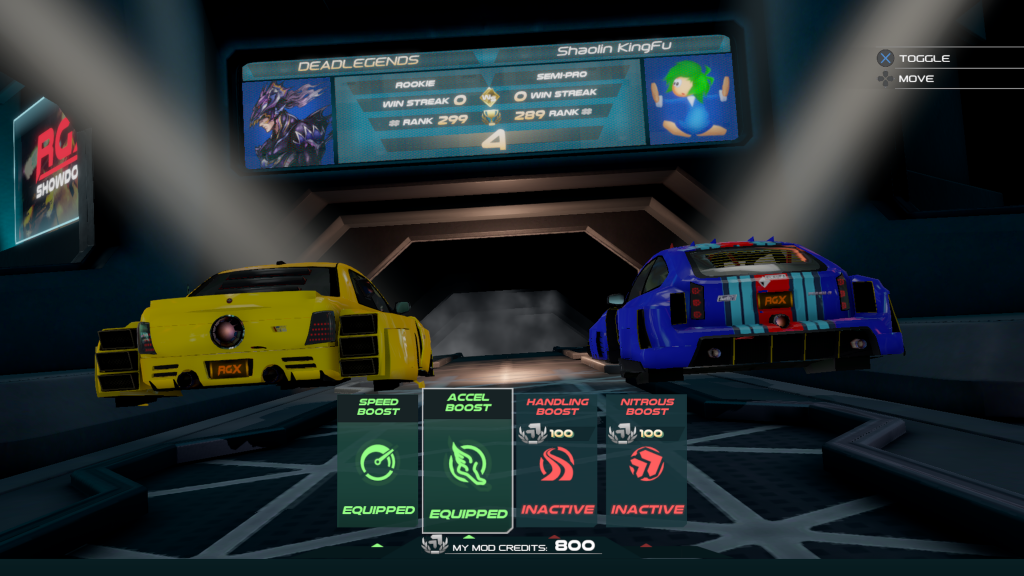 The ability to tinker with these mechanics and “loadout” of your car through the modifications is incredibly welcome, and manage to keep the game somewhat fresh as you race through the incredibly similar tracks. You are also able to add decals to your car and customise how it looks by unlocking new colours and decals where you are able to spend earned points. While it is a welcome idea, it might not be quite enough to sustain a player for hours on end.

Ultimately, there are hints of brilliance in RGX Showdown’s presentation, however it’s let down by a chronic lack of variety in its tracks. With some presentation issues in its menus, it takes away from the treat of how the racing actually handles. It makes for a game that feels like it was released a little bit too early, and needed more time in the oven to polish and iron out some of its issues, like the dodgy menus, or lack of track variety.

With it’s high-octane pace, RGX Showdown is an incredibly promising blueprint for a low-priced arcade racer, but with the untimely demise of its publisher, Telltale, it’s hard to tell if the developers, Shortround Games will be able to make a sequel or expand on the premise of the game.

It is also unclear as to how this game’s support will be handled, as the publisher is now defunct, it’s unlikely that we will see any updates to the game, or if the developers will even get a payout for sales of the title in the future. It’s an unfortunate situation for a game that has so much promise held within it.